Flooring can make or break your ability to make your bathroom look amazing. Tiling, even when on the floor, can be the biggest statement in your bathroom. Wondering what pros do with this important bathroom element? Check out the things you can do, too, for a statement piece right beneath your feet. 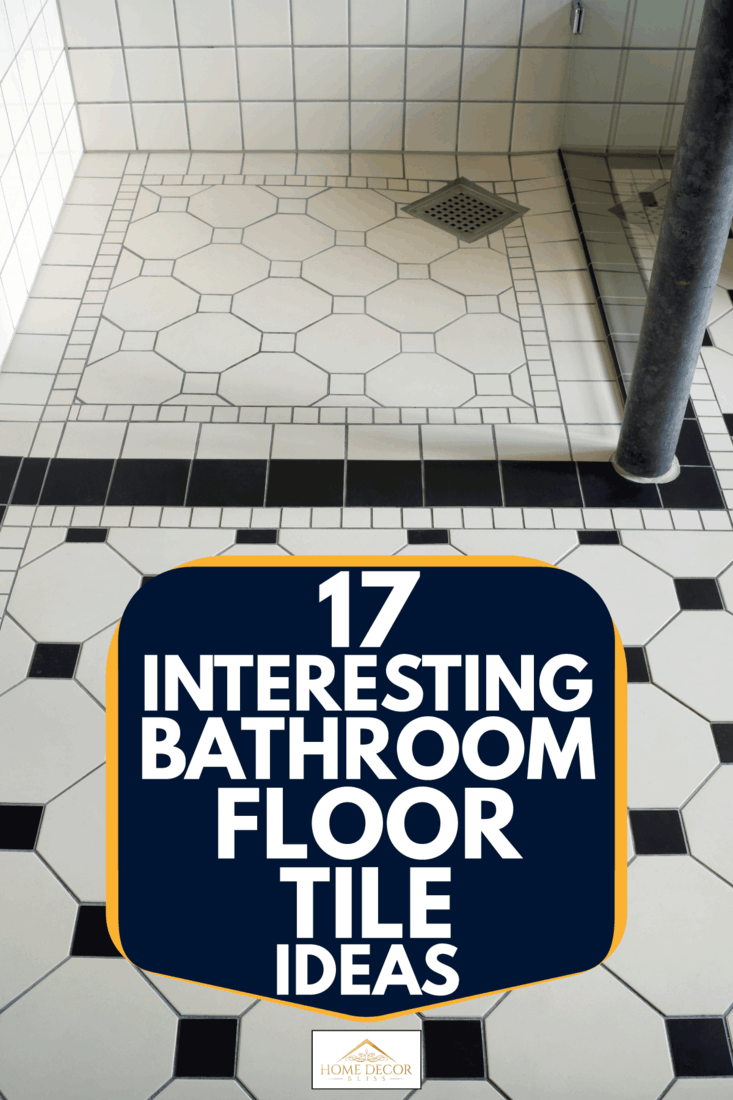 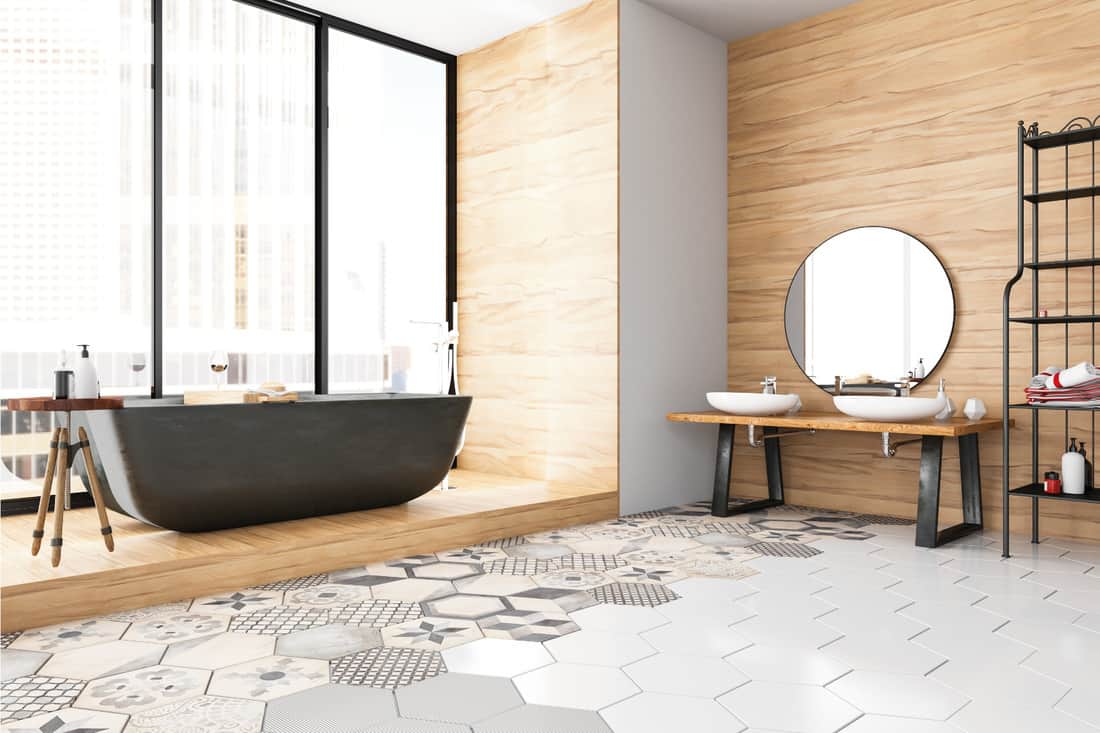 Geometric tile designs are in, big time! That's fairly obvious, but this cool designer decided to kick things up a notch by getting a gradient going. On one end of the bathroom are plain white tiles. As the tiles get closer to the bathtub, you start seeing shades of grey and then full-blown patterns in the flooring.

This result is a major focal point of the room and adds a level of action that you rarely see in day-to-day bathrooms. You might be able to do the same with some stencils and the right paint. (By the way, did you know this is also a popular deck paint trend among artists? It's true!)

Click here to get some tile stencils from Amazon. 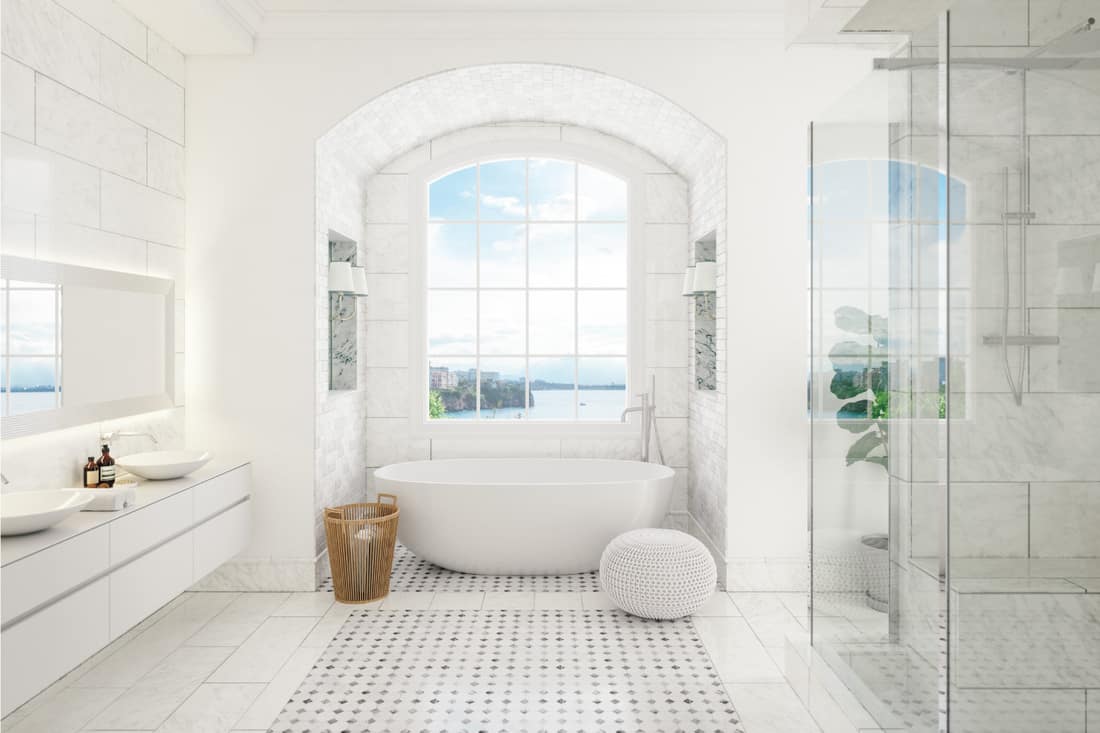 A fully white tiled bathroom floor is not unusual by any means, but this tile designer made it pop by adding a new element: a pebbled carpet that leads up to the bathtub. This carpeting illusion doesn't involve a full texture of pebbles, but rather, small light grey tiles forming a rectangular faux carpet that creates a noticeable path. This cute look works with almost any color scheme, but it seems like white and grey is ideal for most bathrooms. It's exotic, subtle, and adds texture to the room. What more could you want? 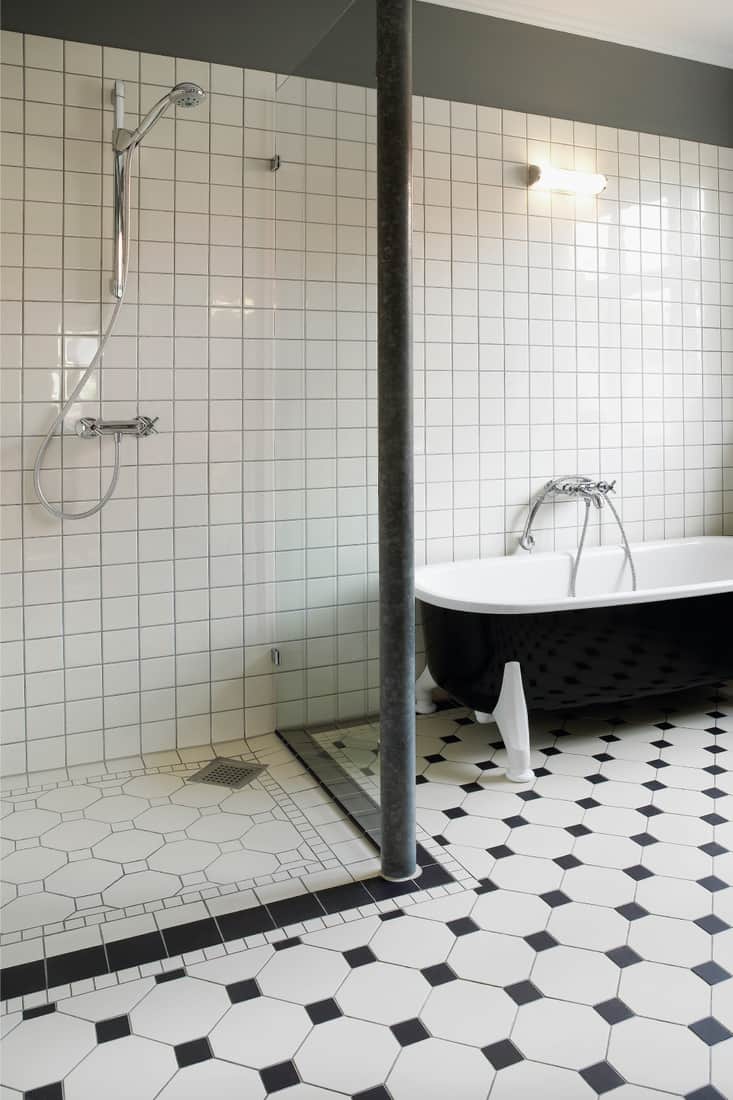 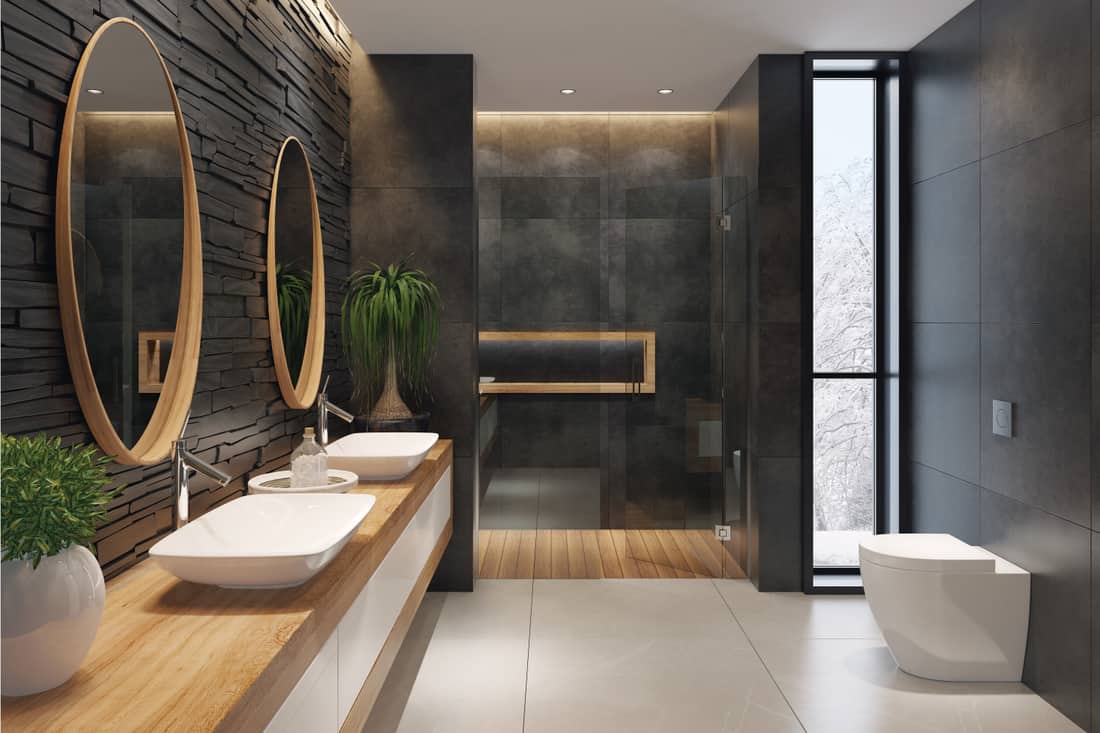 Wanna know one of the most popular trends in the bathroom flooring world? It's wood-look tiling like the one you see here. Wood-style tiling gives a bathroom an air of elegance similar to what you would expect to see in a spa or luxurious resort. The only difference? It's less prone to mold, easier to take care of, and in many cases, cheaper.

Wood tiling is a great pick for people who fell in love with wood but want something that's more bathroom-appropriate. Trust us when we say this is one trend that won't be out of style anytime soon. 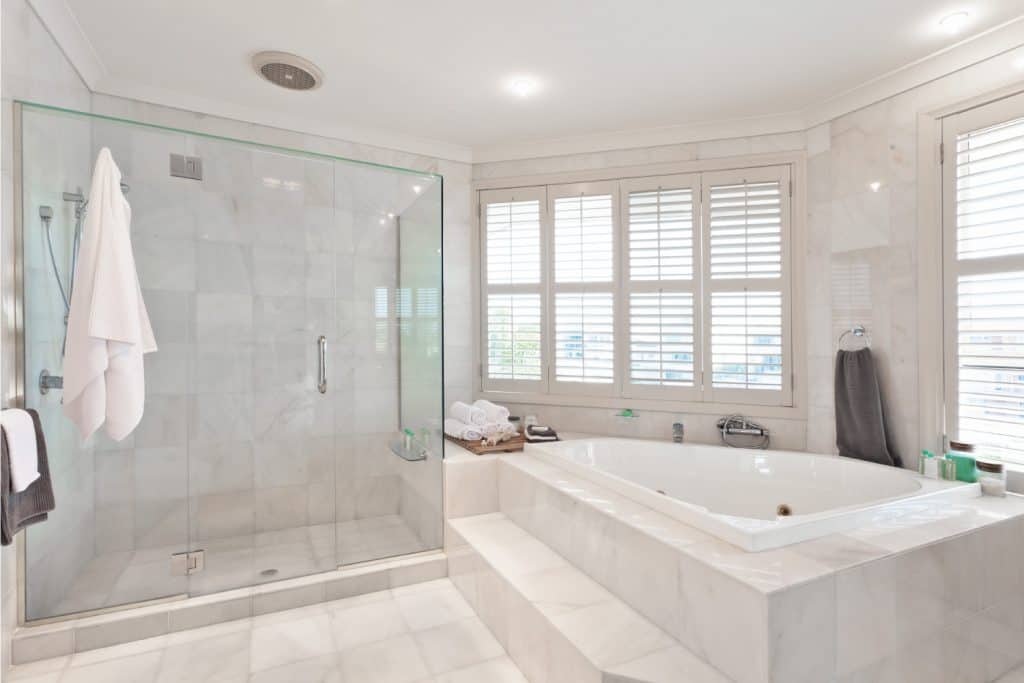 This is not a new concept by any means of the word, but oh goodness, it's such a nice look! Marble, particularly marble with a slightly warm hue like this one, is an excellent choice for people who want to have a timeless bathroom that looks amazing and still feels homey enough to work in any house. This marble shade looks great with silver bathroom accents, by the way.

Click here to get silver bathroom accessories from Amazon. 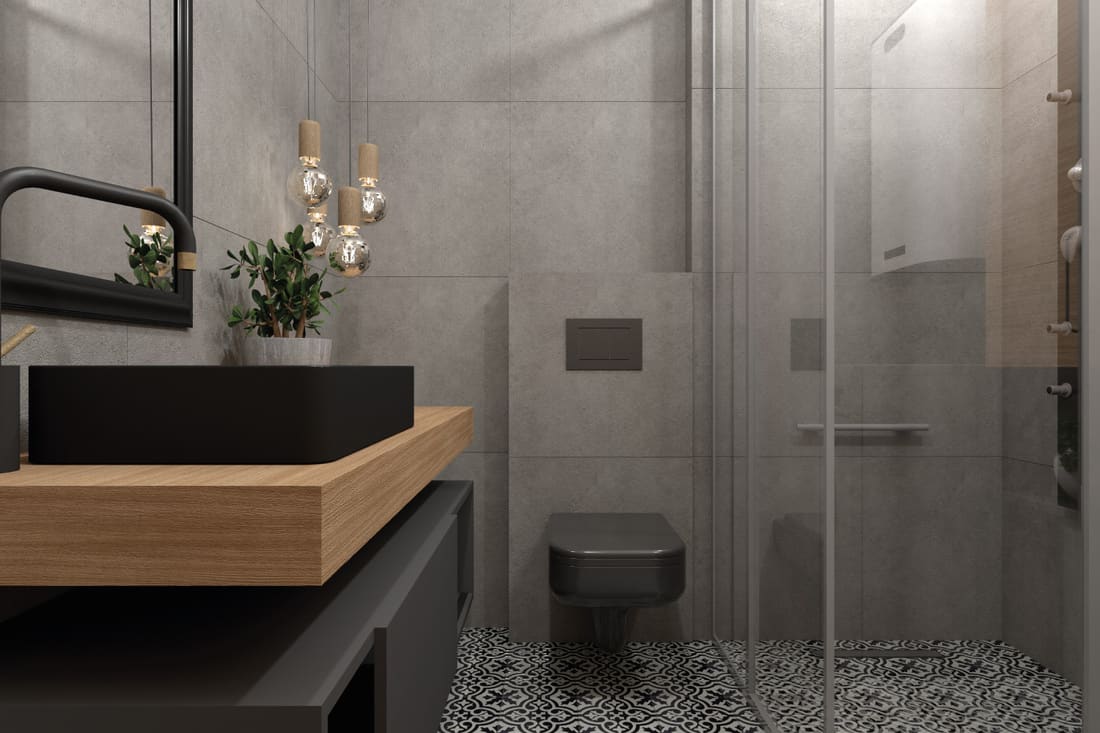 The current main trend in most parts of the country is to go for large floor tiles throughout the bathroom. Admittedly, it's a great look that adds a seamless, modern touch to every building. However, that isn't always a good thing. Too much seamlessness can look fake or even downright soulless. This is especially true with cooler color schemes.

This designer broke up the monotony of their industrial-style bathroom by adding tiles with a detailed, petite pattern. This gave it a human element that was very much needed. 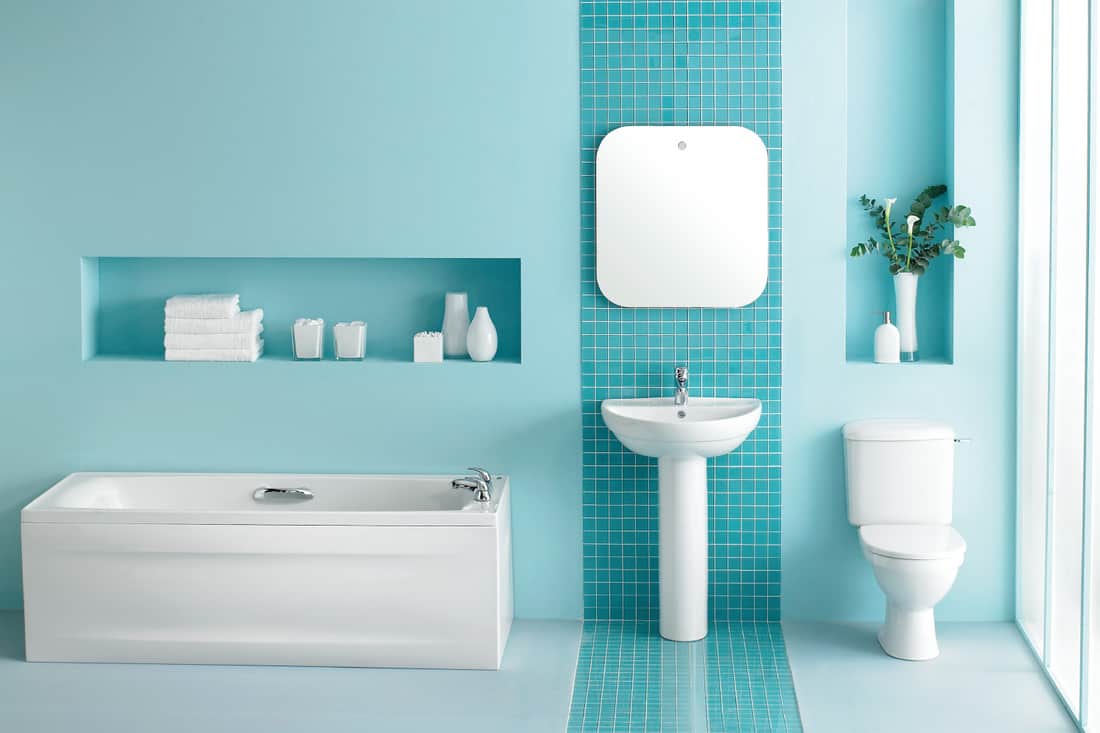 While the tiling is considered to be the de facto flooring of most bathrooms, this doesn't have to be the case throughout the bathroom. This crafty designer was able to work with a poured concrete floor that was buffed to a matte finish for most of the bathroom. Then, to add a unique focal point to the bathroom, they continued a stripe of tile from the wall on the floor. Though this isn't going to be the cheapest look to do, it definitely stands out in a good way. Everyone loves that creative flair! 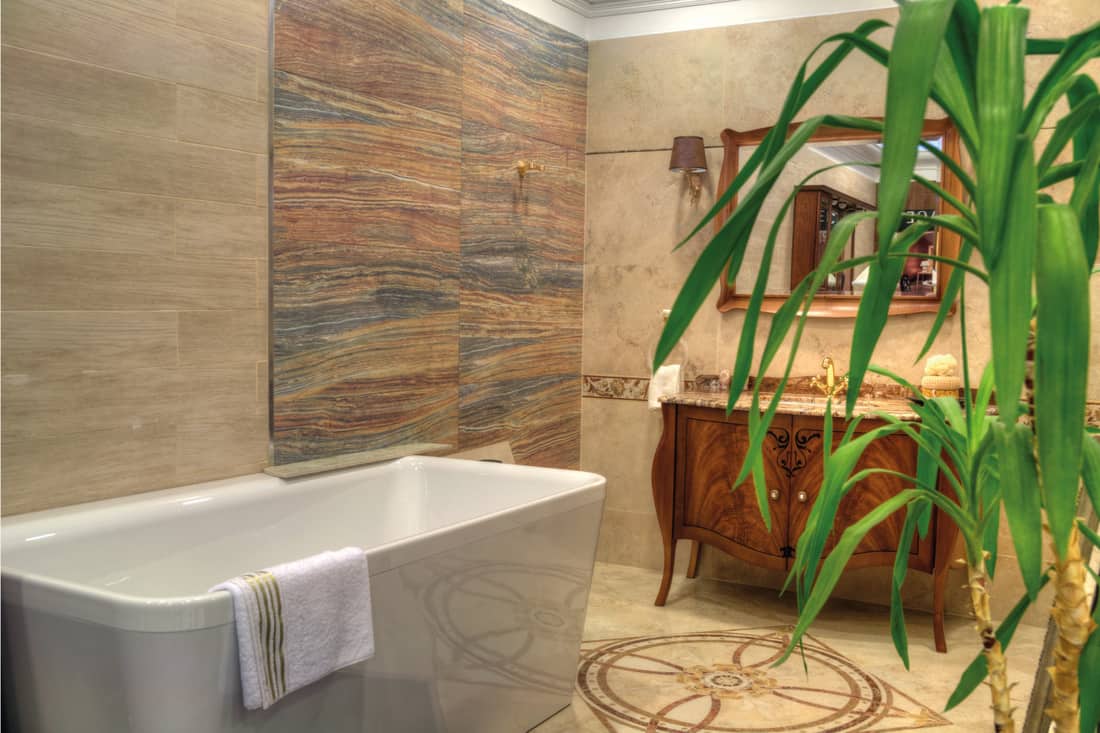 Did you know floor murals are a major thing in top mansions these days? It's true, and you can use tiling to make it happen in the bathroom. This Italy-inspired bathroom features a gorgeous old world compass design made entirely out of cut tiles, and we couldn't love it any more!

Though tile-based murals aren't the cheapest trend to follow, there's no questioning whether this will remain elegant or not. It's timeless enough to make your guests feel like they're in a Victorian mansion every single time they drop by. If you want to really rock this look, opt for classic Italian accessories too.

Click here for a Tuscan bathroom tissue holder from Amazon. 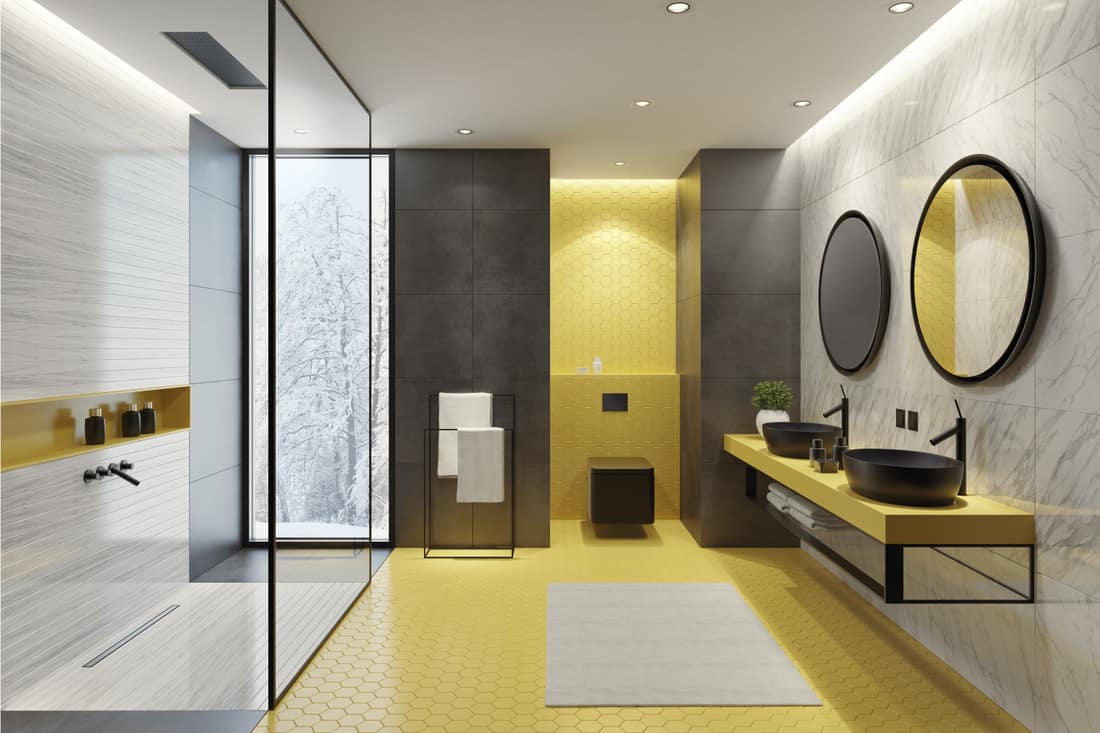 Octagonal and hexagonal tiles are colloquially called honeycomb tiles. This sweet moniker might've inspired the designer behind this cute but insanely modern bathroom. Like most other bathrooms done up in a modern style, this bathroom is primarily white and dark grey. It's an industrial look.

However, the designer broke away from the status quo by choosing a bold color for the bathroom flooring and walls: yellow. We have a feeling that this a golden design that will continue to get positive reviews! 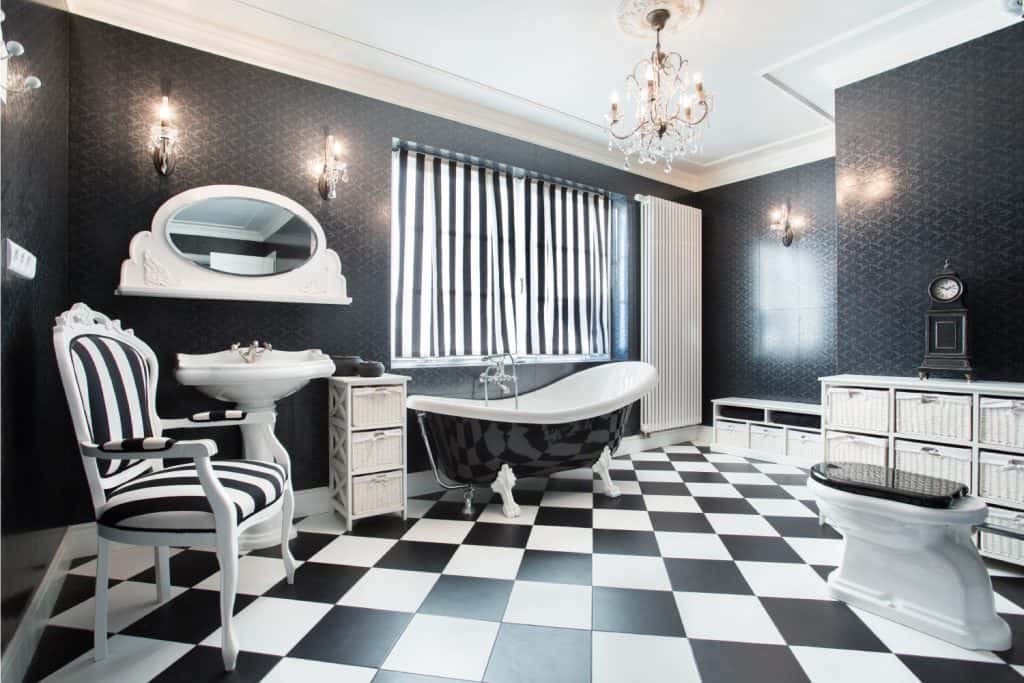 Black and white checkered tiles were extremely popular in the 1950s and during the Gilded Age. We honestly don't know how they ever went out of style. The high contrast that this bathroom flooring option offers a bold statement that will make jaws drop. While it's traditional in its own right, the way the tiling looks on modern fixtures makes it avant-garde.

If you want to go for this option, we strongly suggest working the theme into everything. For example, having striped shower curtains can help give you that trippy yet bold look.

Click here to get a striped shower curtain from Amazon. 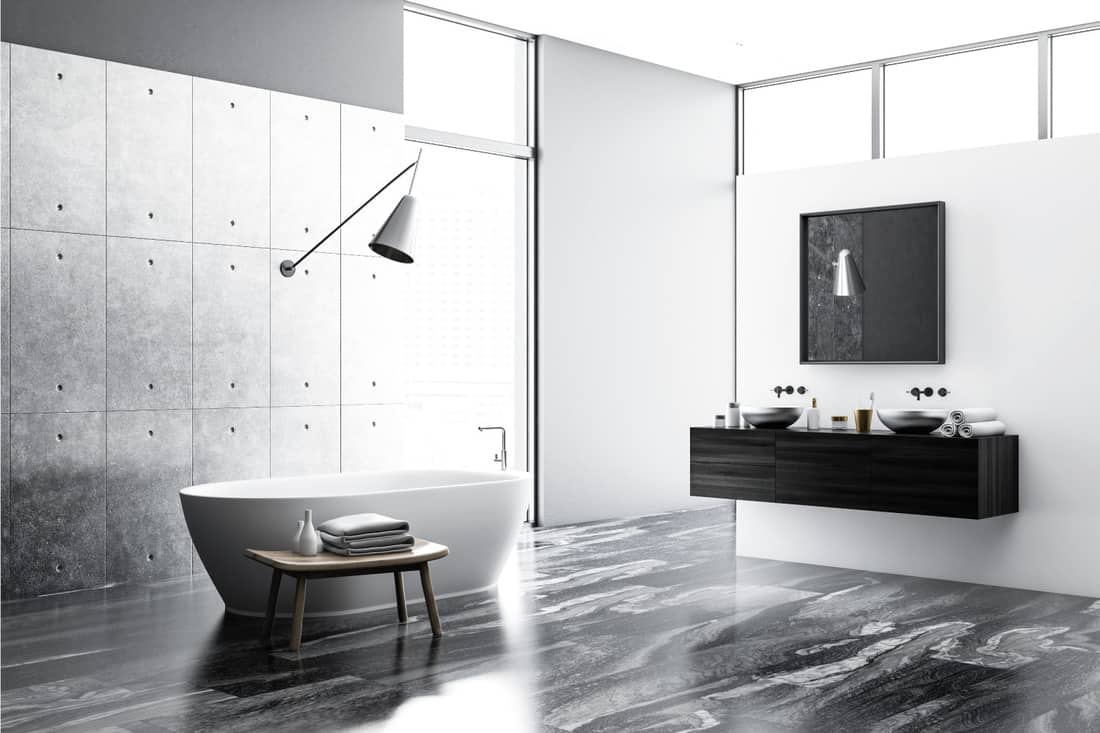 When most bathrooms involve marble tiling, it's white marble or a cream-colored marble, a similarly light-hued, marble-looking tile that is not actually marble but looks great. Black marble is a rarity, primarily because it's an intimidating tile color to work with. However, the dramatic look of black flooring might just be what your bathroom needs.

This is not a tile choice for the faint of heart. If you want to pull it off in a petite bathroom, you better have a good contrast involving white walls and fixtures. Otherwise, it may look cramped. 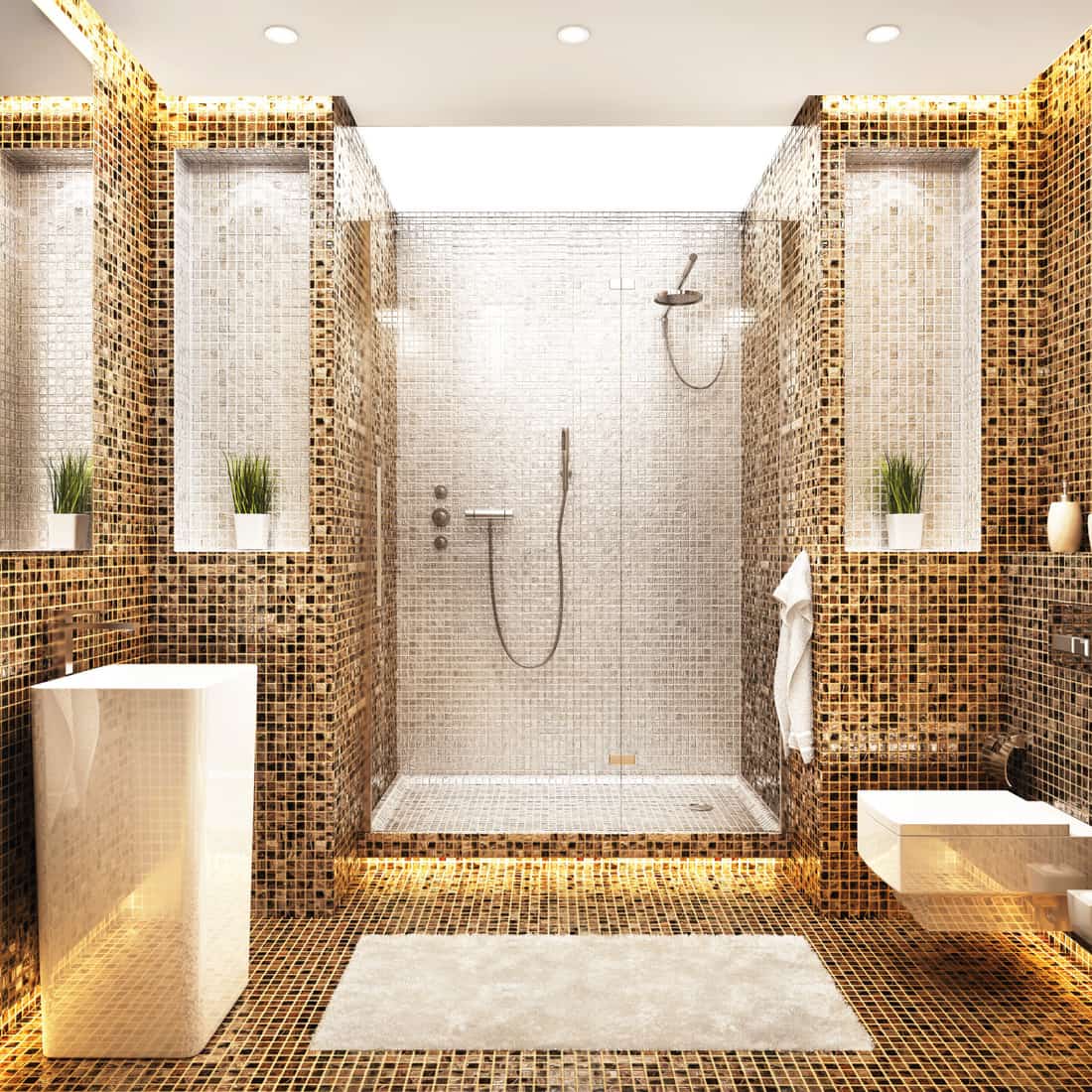 Mosaic tiling fell out of favor once people started using it with uniform colorings, and rightfully so. When done poorly, it looks like a cheap grade school bathroom. This designer, though, didn't use it the wrong way. The bathroom walls and floors are done up in gold-hued mosaic tiling, featuring just a pinch of shimmer.

The reason this looks so good is twofold. First, the mosaic tiling comes in a wide range of different gold hues. This gives a lot of dimensions. To add to that look, the designer added lighting that highlights the tiling. This gives the room an unearthly glow that's visually stunning.

We've already seen a carpet made out of pebble-like tiles, but did you ever see an entire shower floor made of them? This handmade pebble floor switches out traditional tiling in favor of petite pebbles. This look gives the shower an eye-popping vibe that is striking yet not completely out of the left field. It's quirky, but not oddball.

Fans of this look need to make sure that they're ready for a look that's this organic. Want to turn this into tomorrow's DIY project? Big tip here! Always use pre-tumbled pebbles since the ones you find in your back yard can cut your feet.

This striking green tile looks like it's a massive tile spread at first, but it's not. It's just your typical hexagonal green tiles, painted with a couple of stripes. After that, the tiles were arranged in cool starburst patterns throughout the bathroom's floor. This look works for two reasons.

First, the pattern that the tiles were painted in offers a unique twist on a classic flooring option. It's a way to keep you guessing, or at least give your eyes something to process. Second, the pop of green is a very welcome dash of color. To make this look pop even more, you might want to get a bathroom goodie that matches the color.

Click here to get a set of trendy bathroom accessories from Amazon.

We've mentioned many different concepts involving honeycomb tile, and that hexagonal look is now synonymous with geometric patterns. That being said, rectangles are also a thing. So are triangles. This geometric tile layout took a break from the increasingly-common hexagon tile to create a neat, multicolored tile pattern that brings color and dimension to an otherwise drab bathroom.

This cool look is slightly midcentury modern but pointedly current with trends. The soft colors and unique concepts are what makes it work so well.

If there is one color that people sometimes feel leery about using in a bathroom design, it's bright robin's egg blue. This designer didn't care about the uncertainty and did it anyway. They added a cool dovetail pattern to the blue tiles on their floor but knew that they would overwhelm the bathroom's balance if they did that throughout the room.

To help avoid a hypersaturated look, the designer added a painted tile pattern on the wall and made a point of adding some whitespace alongside it. This gave the bathroom an exotic look, which was only further accented by accessories like a faux Oriental rug and a wooden table.

Most of the time, people want to see crisp, glossy bathroom tiles on their floor. This doesn't always have to be the rule, though. This designer took a unique twist on trends by accenting their dark industrial-style bathroom with reclaimed hexagonal tiles. More specifically, they used reclaimed terra cotta.

This highly unusual combination gave the room a very exotic, almost earthy vibe. The contrast between the perfectly polished shower and the terracotta gives this look a gritty, rugged vibrant ambiance that makes people rethink what they know about bathroom style. With that said, it's a daring look. Are you bold enough to try it?

Get creative underfoot with bathroom tile colors and patterns that make a statement. Be modern, be rugged, choose your style to accentuate the entire room!