If you've ever walked down a towel aisle in a store, you've probably noticed there's an overwhelming amount of colors to choose from. However, is there a color that is superior to the others? Well, we've looked into the best color for bathroom towels and have the answer for you.

The best color for bathroom towels is white. Not only does white match any color your bathroom might be, but it is also easy to clean. White towels aren't susceptible to fading the way-colored towels are, and if you decide to change the rest of your bathroom, you won't have to worry about having to buy new towels to match.

Now you know the best color for bathroom towels, but keep reading as we discuss this further. We'll also answer some other questions about matching bathroom towels if you don't like the idea of having white ones. 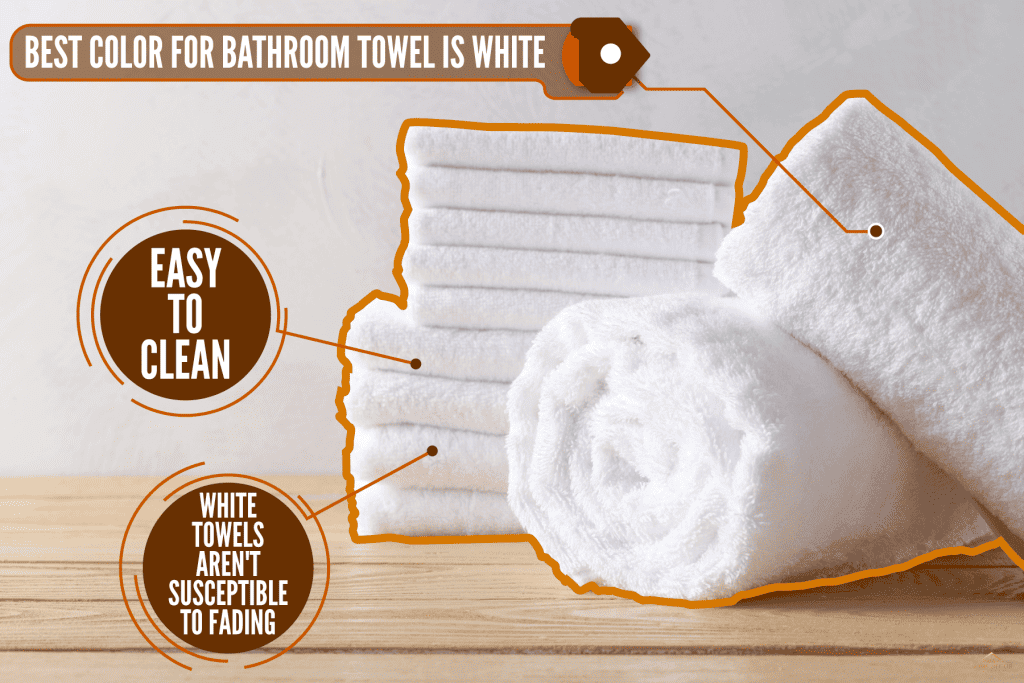 White Is Best for Bathroom Towels

It may be hard to believe that white is the best color for bathroom towels, but there's a reason white towels are the choice of hotel rooms all over the world. They look luxurious, they are easier to clean, and they will match almost any style of bathroom. 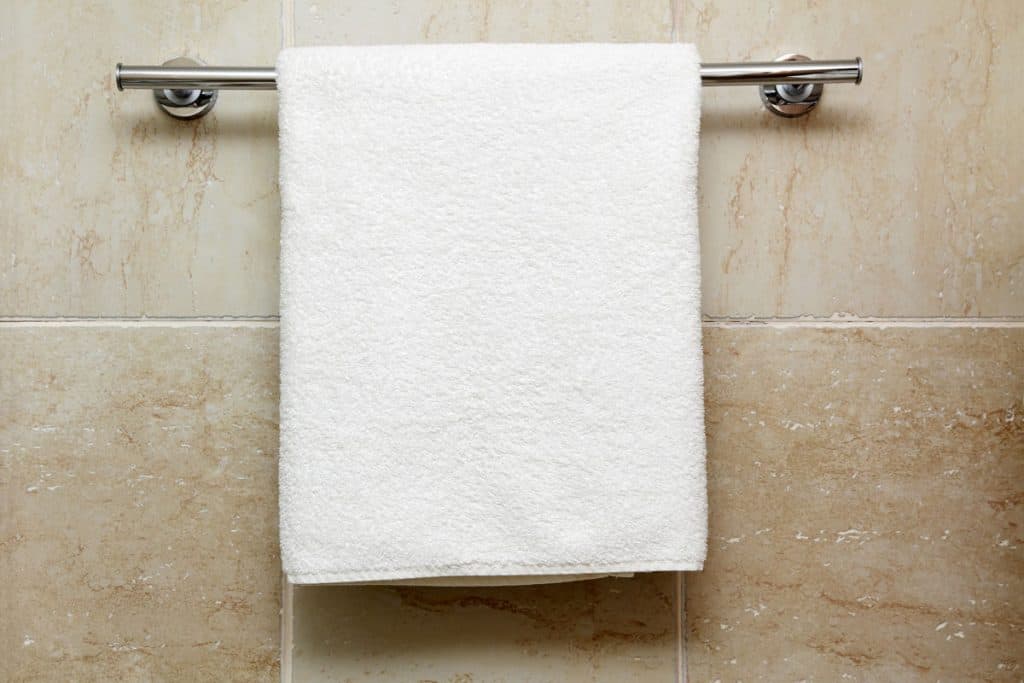 It is true white towels will show more dirt, and though it might seem like a negative trait for them to have, this is actually a good thing. Towels can be a haven for bacteria, so you'll be more likely to throw your towels in the wash if you notice the dirt on them. Colored towels will mask dirt and stains, which means you might not realize they need cleaning when they do.

You may be concerned that since white towels show dirt more, they are harder to keep clean. In fact, this is not the case. It's actually easier to keep white towels clean than it is colored towels.

Towels should be washed on the hottest setting, and if you have colored towels, this might cause them to fade. Also, bleach can be used to wash white towels because there's no risk of damaging the color, adding another way to sanitize them. If you don't want to use bleach, try adding half a cup of baking soda along with your regular detergent. It can help lift stains. 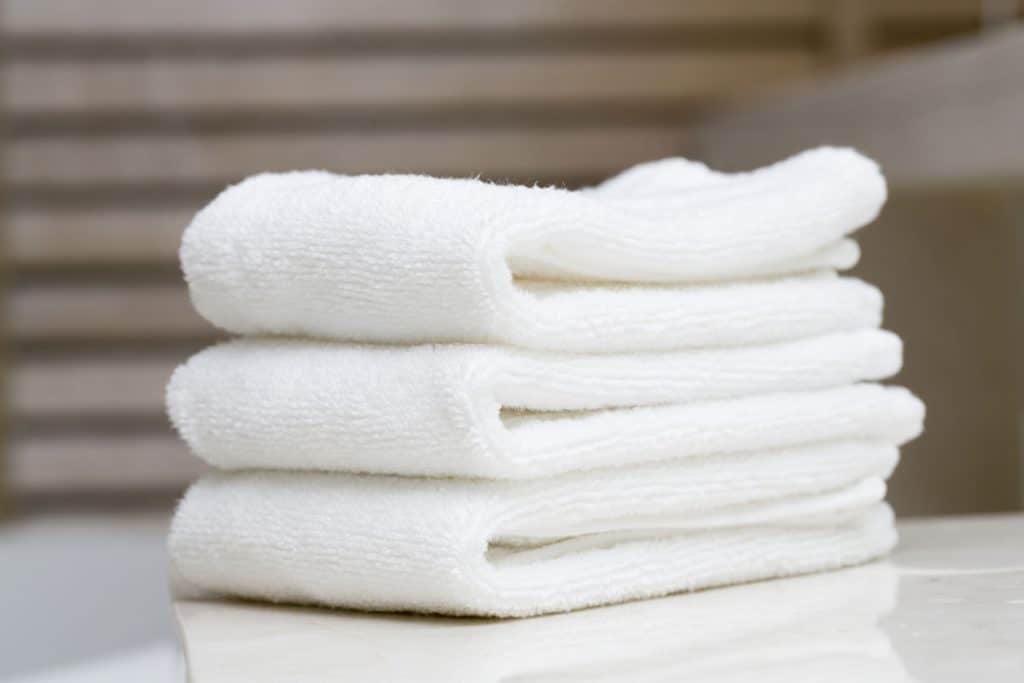 For some instructions on how to bleach your white towels, check out another one of our blogs on the topic here: How To Bleach White Sheets And Towels

While it's easy to clean and sanitize white towels, stains will, of course, show up more. Makeup is the biggest culprit for leaving stains on white towels. It's important to treat any makeup stains right away to have the highest chance of removing the blemish.

Check out this other post on how to treat stained white towels: How To Get Yellow Stains Out Of White Towels

How do hotels keep their towels so white?

Hotels are able to keep their towels white by using commercial washers and/or pretreating their towels. The trick to keeping towels white is to treat any stains right away and wash them frequently. Since hotel housekeepers collect the towels to wash often, they are not left to accumulate dirt and bacteria. 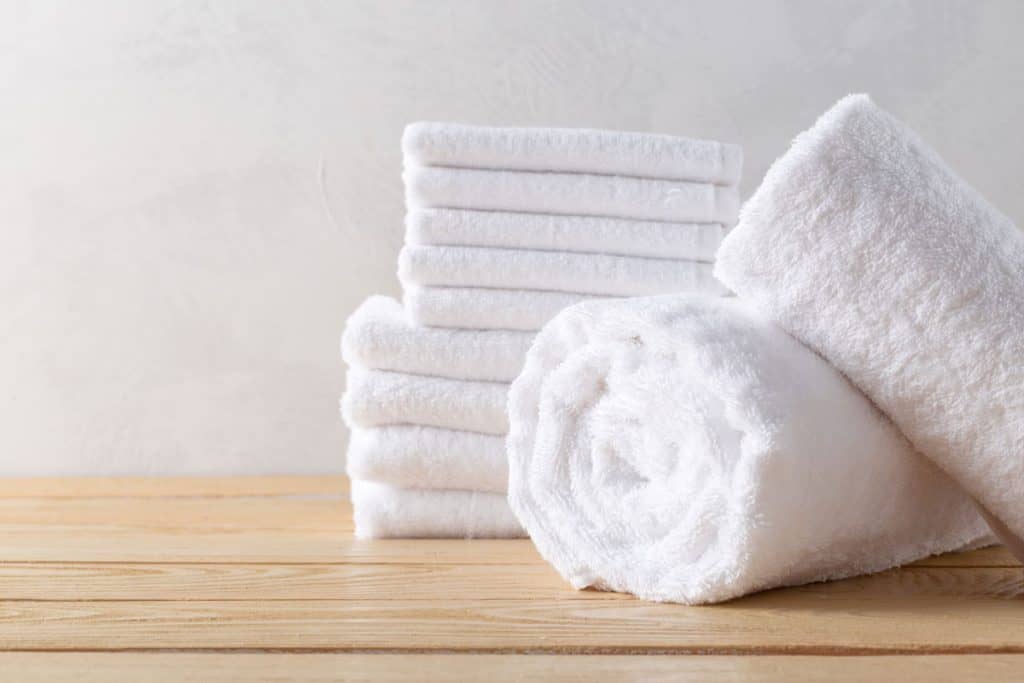 Bleach, white vinegar, heavy-duty detergent, and baking soda are also products hotels use to keep their towels white and soft.  Soaking towels in bleach water before sending them through the washing machine can help lift stains. Chlorine bleach will work best for keeping towels white.

Click here to see Clorox HE Performance bleach on Amazon.

Another trick is not overflowing your washer. If you overload it with towels, they won't have room to agitate against each other to get clean. With any load of laundry, a good rule of thumb is to fill it 75% to 80% full of clothes.

So white isn't for everyone, and if we haven't convinced you that white is best, you may be wondering what other colors you could choose instead. Fortunately, as we mentioned earlier, towels come in a huge variety of colors.

As an alternative, you could choose to match your towels with your decor. In fact, if your bathroom is already mostly white, towels can be a way to add a pop of color to the room. 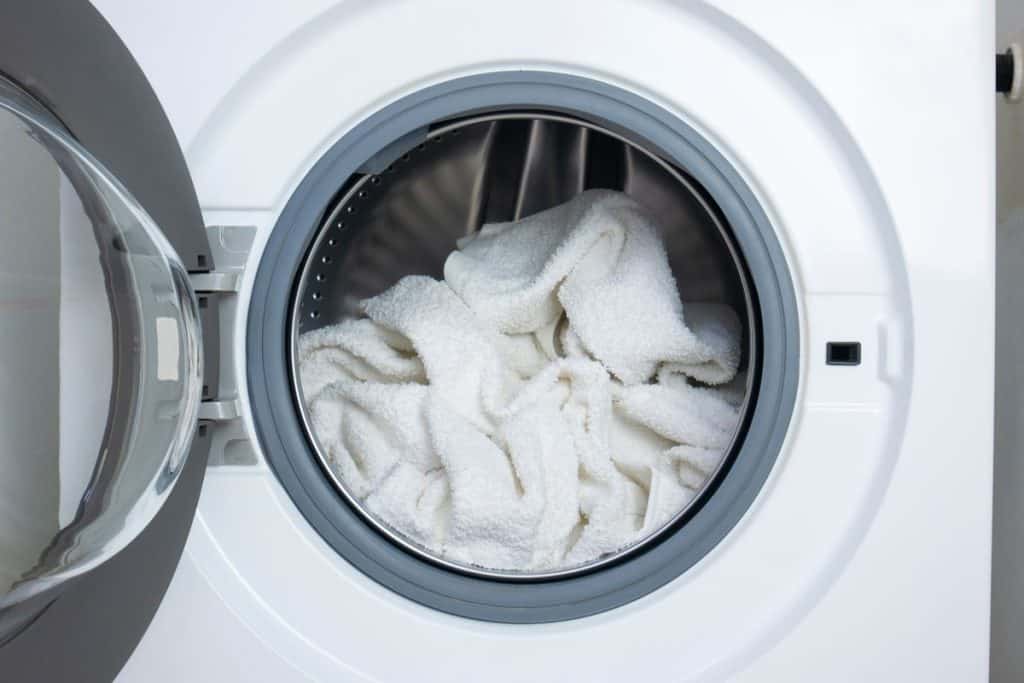 Should your bathmat match your bath towels?

The great thing about decorating your own home is that there aren't any rules. You can choose whatever you want and enjoy. That being said, bath mats are often sold in the same color as available towels or as a set. Nevertheless, the mat does not have to be the same color as your bath towels. However, for a cohesive design, they should at least complement each other. 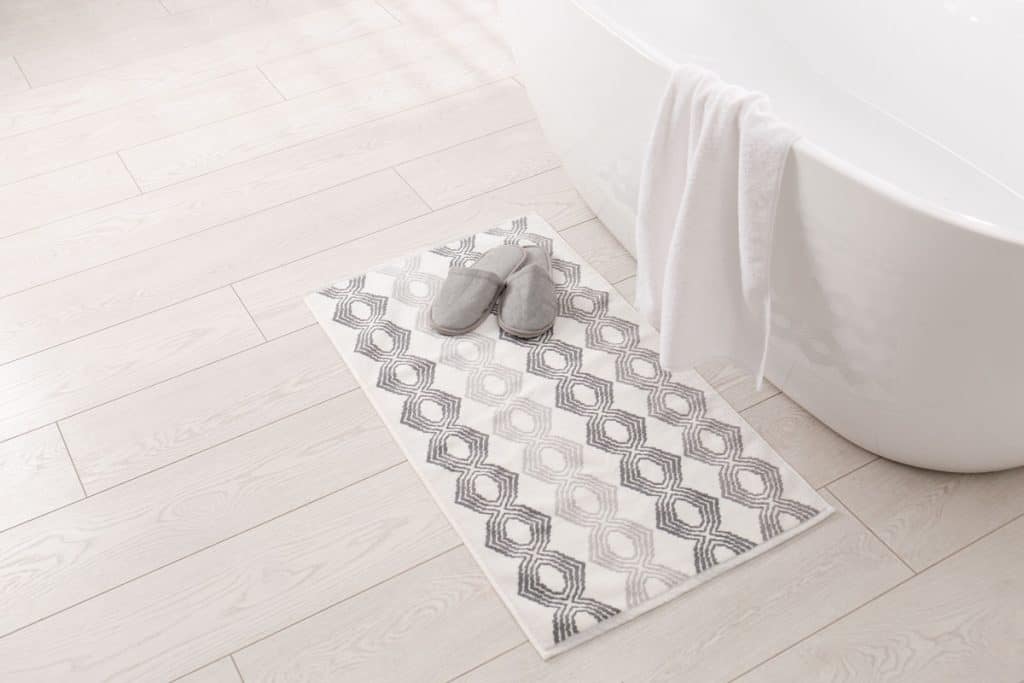 Choose colors that go well together and avoid pairing colors that might clash. If you have a patterned shower curtain, you could choose two of the colors from the design and assign one to the towels and one to the bath mat. 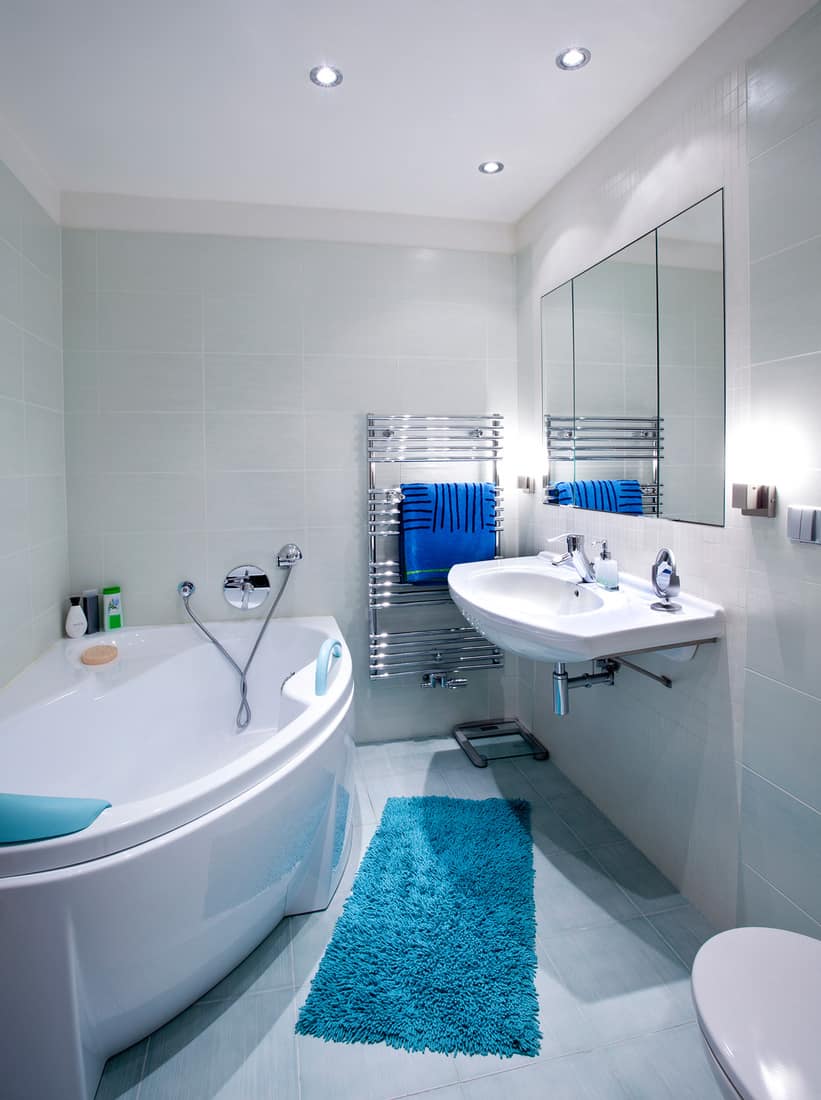 In this bathroom, a blue towel is paired with a blue mat. However, they aren't exactly the same color. Using shades of the same color can work in some situations. It works in this bathroom because the rest of the bathroom is predominantly white and uses cool tones. Nevertheless, these colors do not really match, and the overall look isn't very cohesive. 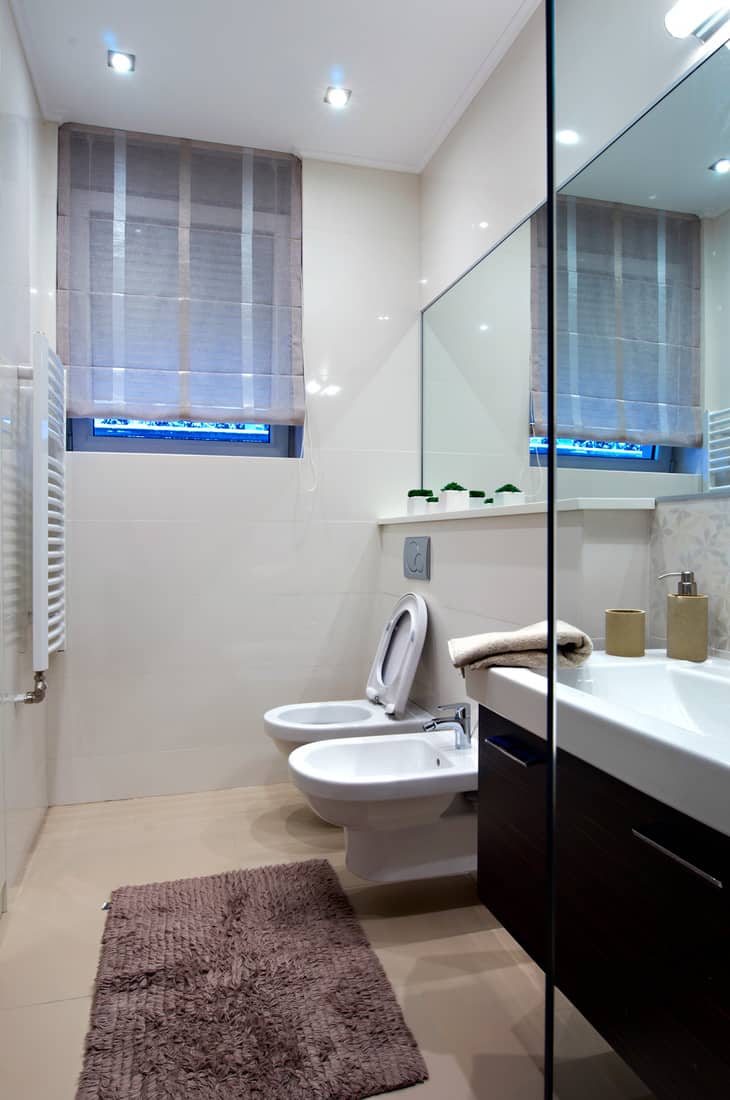 In this bathroom, neutral earth tones are used together. Notice the brown mat, earthy green containers, and beige towel. This bathroom uses colors from the same color palette to create a cohesive and cozy design. None of the items in the bathroom are the same color, but they clash less than in the image above, where the items were both blue.

Click here to see a bath towel and bath mat set on Amazon.

Should towels match the shower curtain? 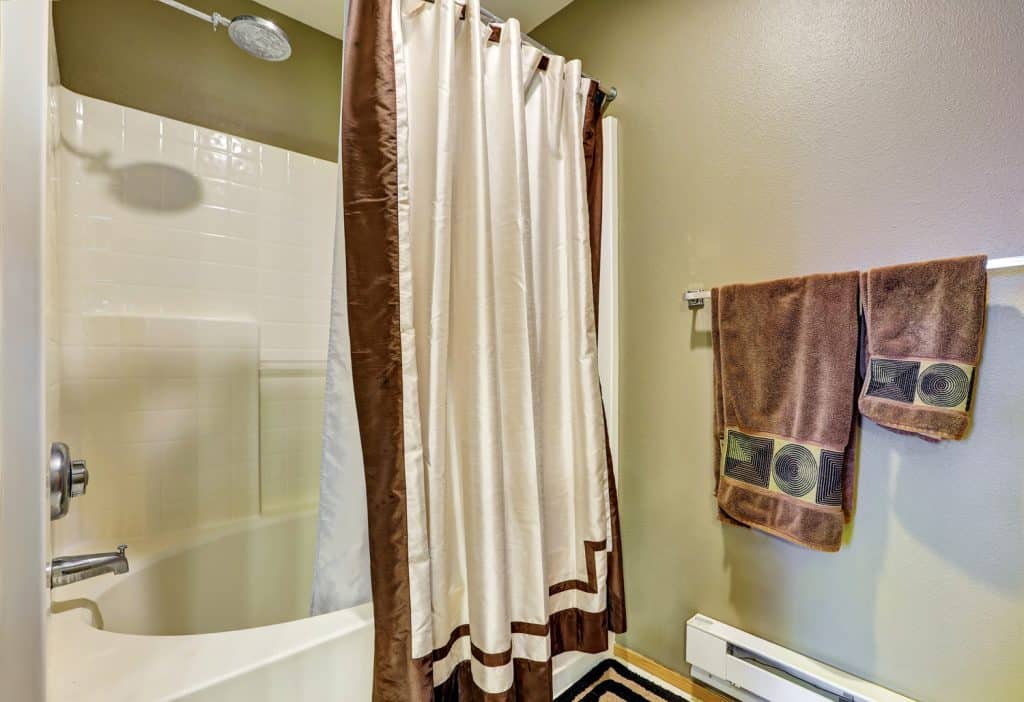 In the image below, a smaller towel that matches the shower curtain is paired with a larger white towel. If the colors of the towels had been reversed, the green might have been too much and overpowered the look. 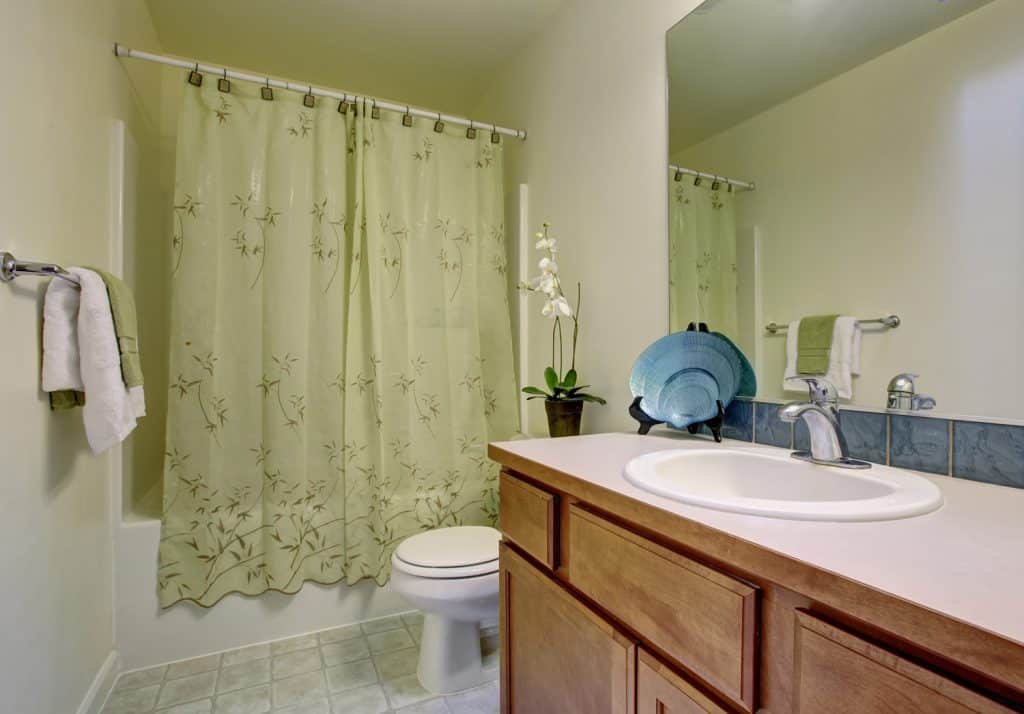 Should all of your bath towels match?

Your bathroom doesn't have to be limited to one towel color. In fact, the image we shared above shows that you can have different colored towels. Choose towels of the same color palette or from colors throughout the rest of your bathroom design. As we mentioned previously, you can choose colors from your shower curtains, rugs, or even artwork.

Or, if you just don't care to match your towels at all, you don't have to. You can even buy sets of towels that are different colors. It's your bathroom, and if you just have an assortment of towels to use, go ahead and use them. After all, the most important thing is that they get you dry after your shower.

Hopefully, our article has given you some things to consider when it comes to choosing the towel color for your bathroom. Overall, white is the best color for towels for both practicality and decoration. However, color towels can add to your decor, especially in an all-white bathroom. Ultimately, the choice is yours!

Once you've decided on some towels for your bathroom, you may be wondering the best place to hang them after you shower. Check out our other blog post on the topic here: Where To Hang Wet Towels After Showering 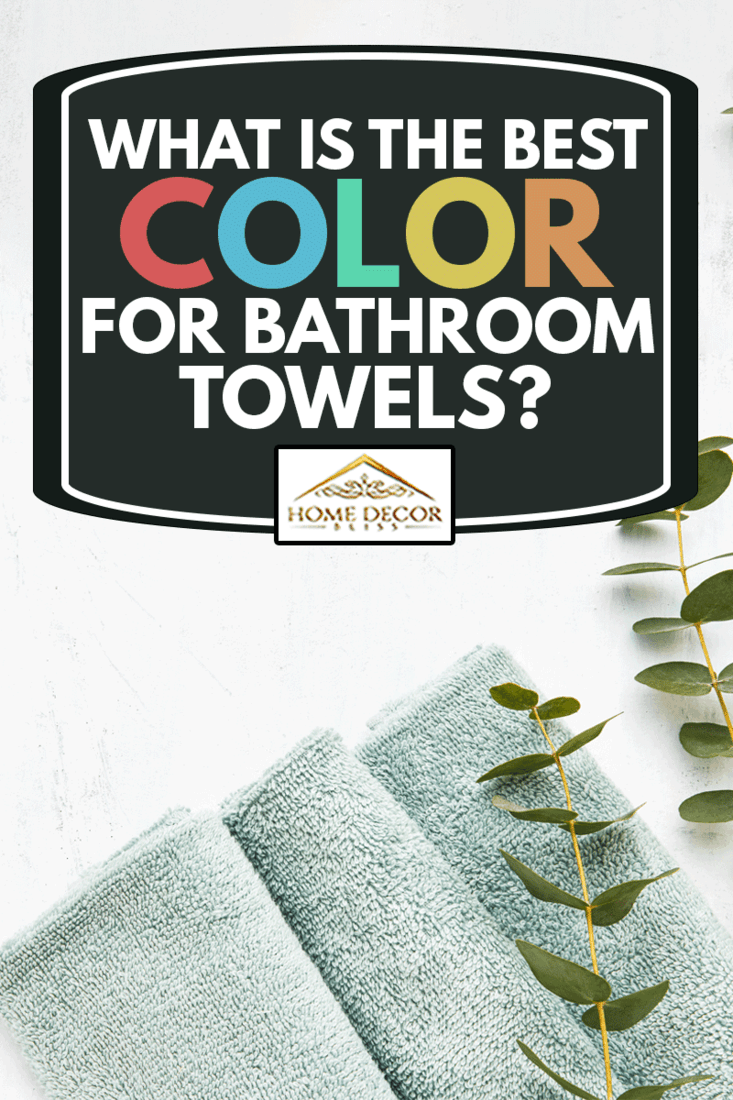