Brown is an earth tone that can easily be coordinated with a wide range of color options. This is precisely why neutrals are a popular design choice and have been for many years. Whether you are looking for a trendy design or a more traditional look, brown could be just the tile color you're looking for!

One of the main benefits of a neutral brown includes minimizing the appearance of dirt on the tile and in the grout. This is if you decide to go with a darker-colored grout to blend into the tile. This frees up precious cleaning time for any homeowner.

On the flip side, harsh cleaners can also discolor the grout when cleaning time comes. Once the color has been affected by cleaners, returning it to its original state can be an issue. So you'll want to be careful with any harsh or abrasive cleaners if dark grout is your plan.

Maybe you are renovating your bathroom on a budget that doesn't include replacing the flooring and are wondering if you can manage the design aesthetic you'd like with existing brown tile. Tiling can eat up a lot of a renovation budget, and surprisingly, brown can be used in both modern and traditional design plans.

Brown can be used anywhere from creating a homey warmth to modern stark contrasts (think dark brown and white). We will give you 12 examples of brown tiled bathroom floors to help inspire your next design adventure. 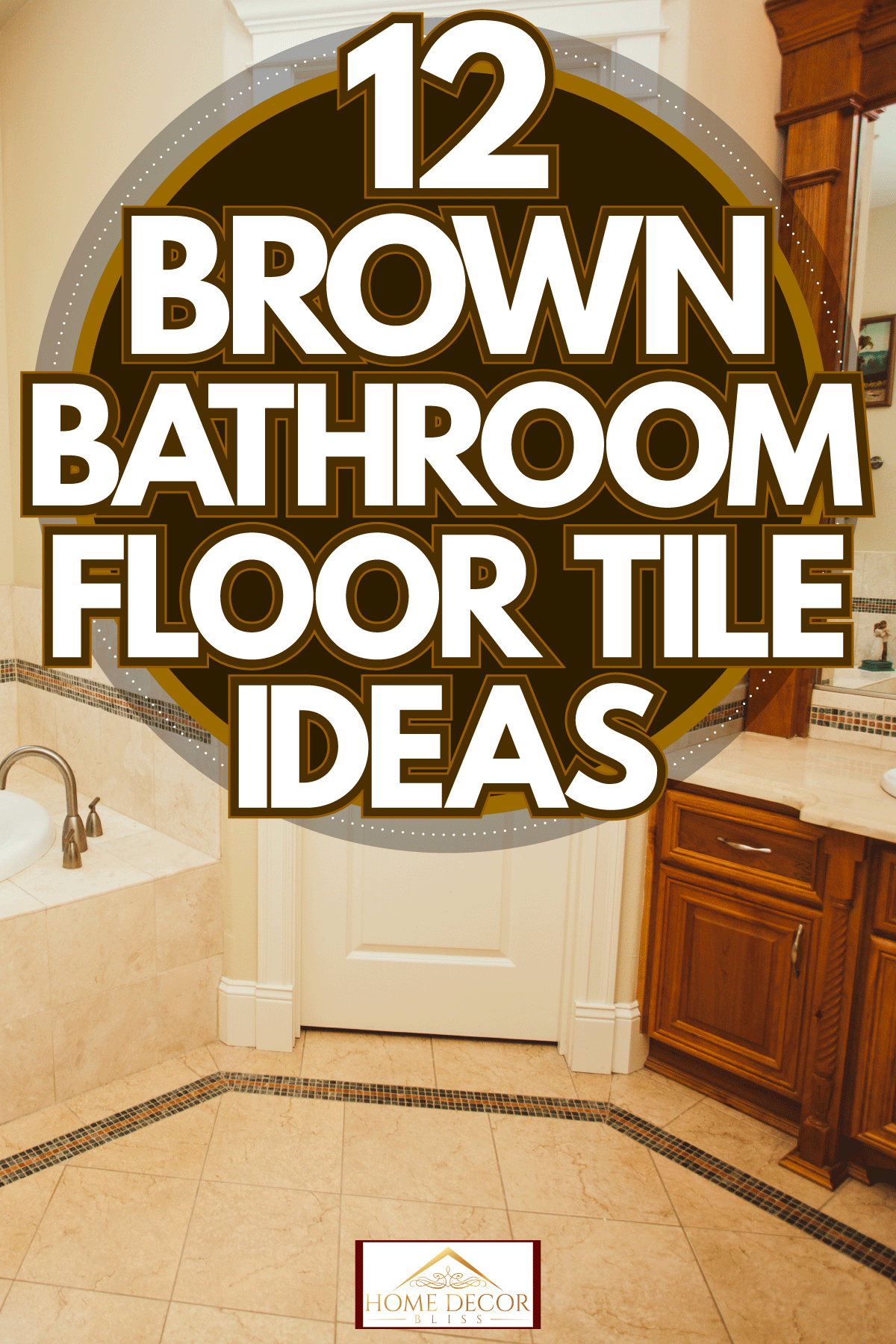 Here not only have they opted for a light beige on the flooring they've also opted for beige countertops and beige walls in varying tones. This creates that homey, inviting warmth. Adding in the elements of white for crown molding and white countertop sinks adds a pop of contrast to everything. 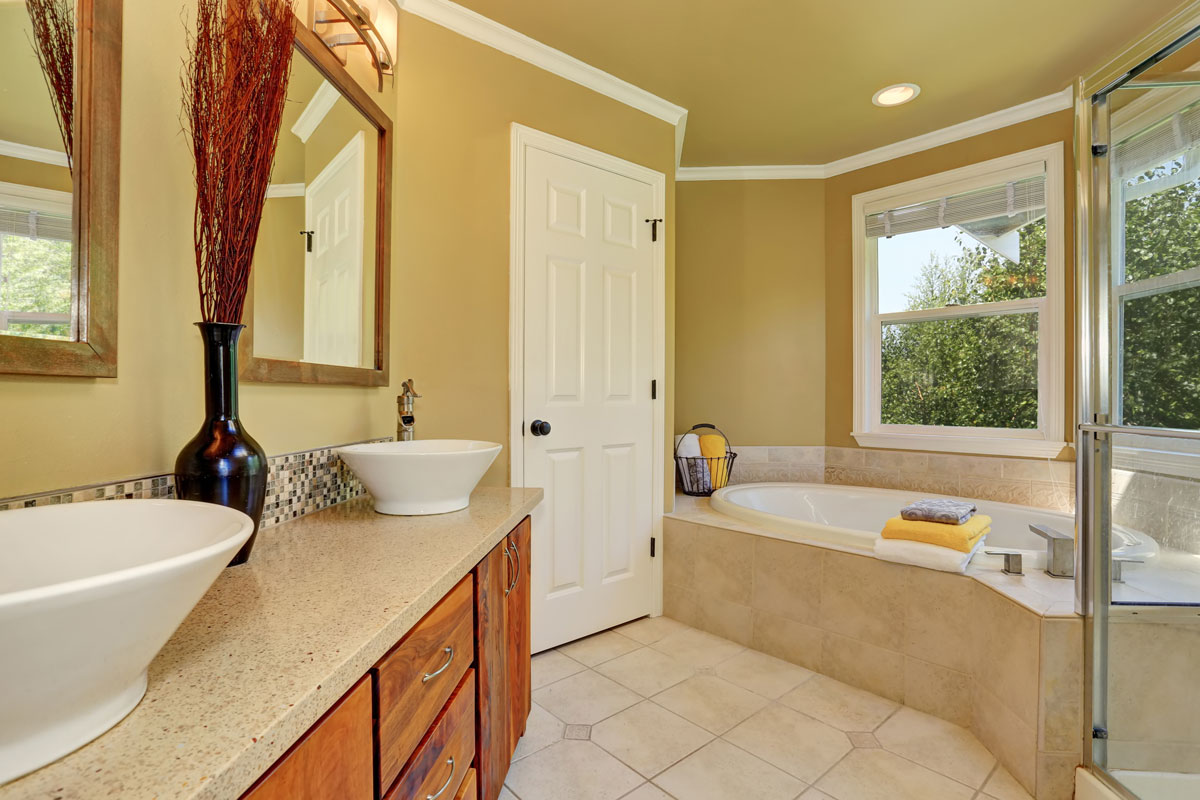 For further interest, they chose to place bold yellow towels on display. This goes to show browns really can coordinate with many colors on the color wheel.

Check out these yellow bath towels on Amazon. 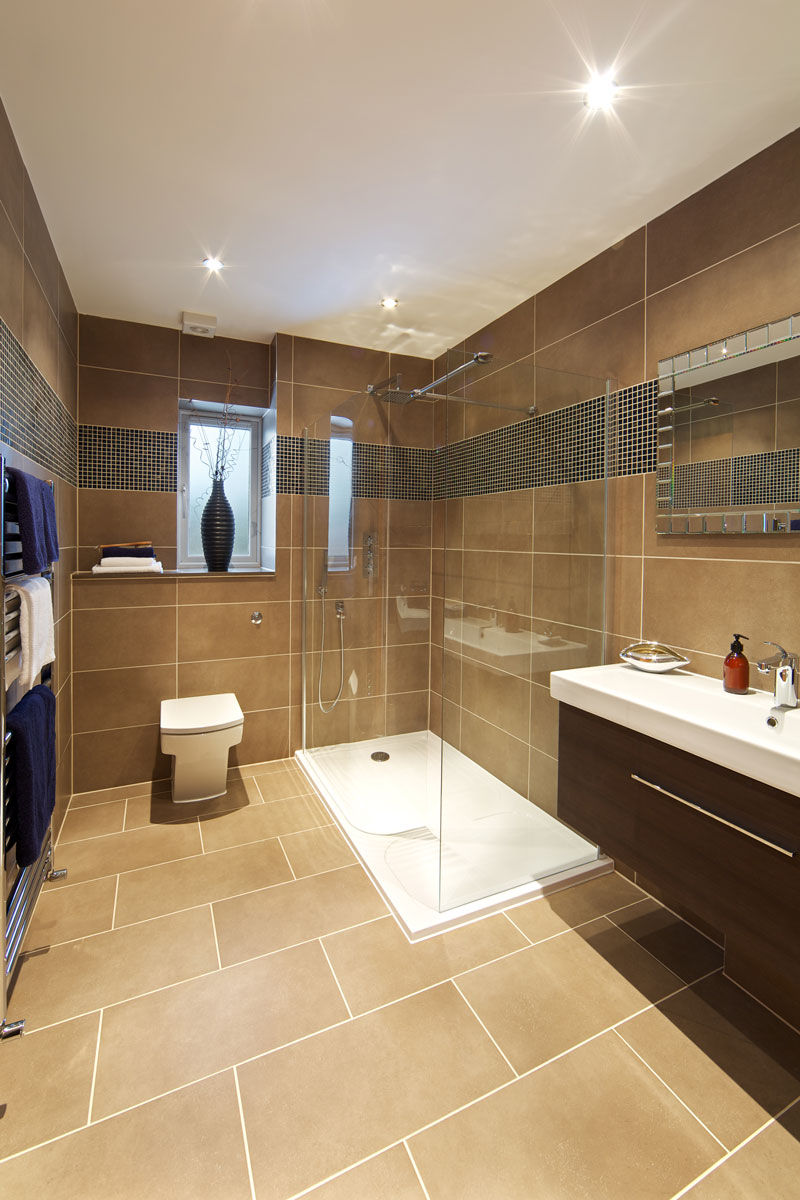 Here they've put uniform tiling on both the flooring and the walls. The white grout really adds a lot of contrast, making the space appear larger than it really is. For visual interest, they've misaligned the floor tiles and added a darker mosaic stripe throughout the wall.

The resulting look is both modern and inviting. The stark contrast between the white grout, dark brown vanity, and dark mosaic stripe make a sleek, modern, visually appealing space.

Here is that bold contrast with the brown we mentioned earlier. Who would have thought you could make such a statement with brown? The brown, white, and powder blue all contrast very well together, creating an absolutely stunning luxurious space.

To add some glam to the design, they have fresh white flowers on display and lighting with crystal-like elements to them. To tie in the crystal-like features in the light fixtures as a nice touch, they outfitted the vanity with crystal pulls.

Check out these crystal drawer pulls on Amazon.

This space uses a seafoam blue for the walls, white accents, and brown on the flooring and tub surround. This is a design that could easily work with an existing tile scheme where the homeowner just wants a fresh update without spending a ton on renovation.

The use of these colors mimics a beach feel, ocean water, sand, and sea foam. The bronze fixtures create an added pop of contrast on the brown tiles and a stark contrast on the white doors. This could be achieved in an existing bathroom by simply updating the fixtures and adding a fresh coat of paint to the walls.

Check out this faucet set on Amazon. 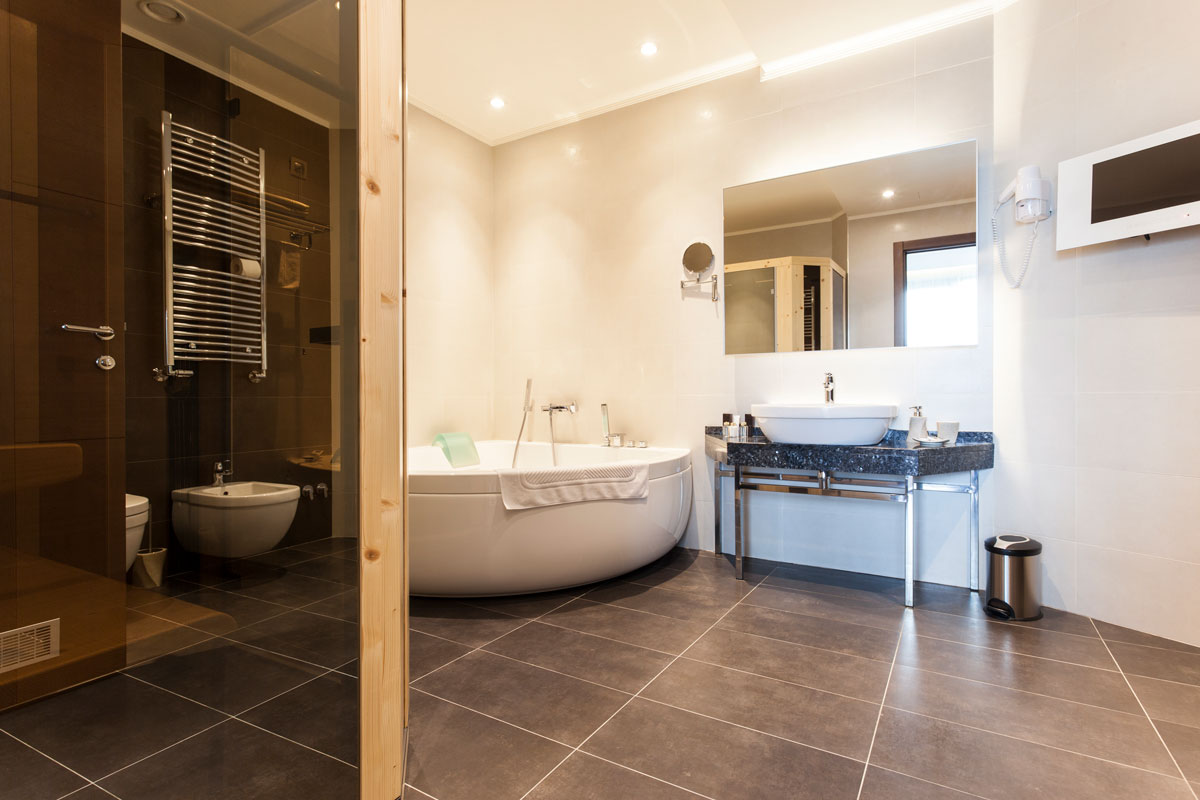 In this ultra-modern design, they've mixed in whites, creams, and metal, making for an ultra-sleek space. With all the whites, mirrors, and metal, the space is still very bright even with the dark brown flooring. For depth and contrast on the flooring, they've used white grout for the brown floor tiles. 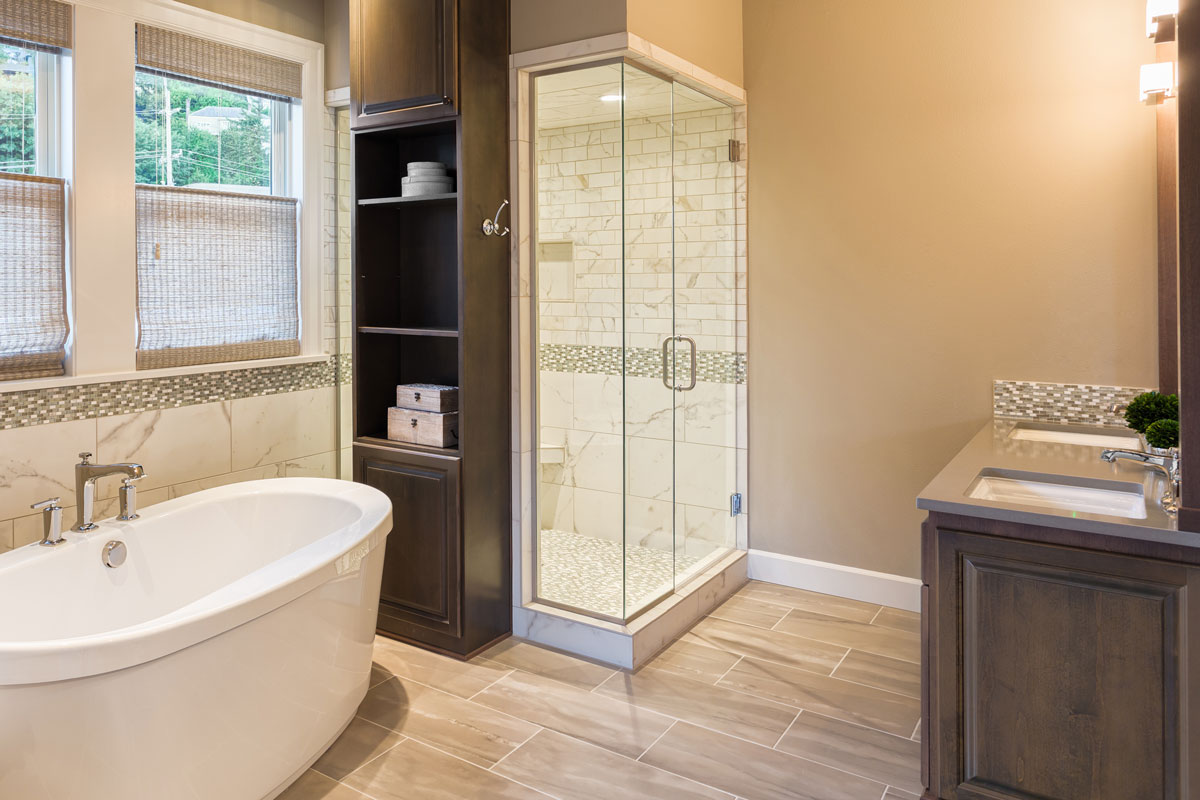 This room pulls off that warm and homey atmosphere with added luxury. They've used trendy tile that mimics traditional hardwood flooring yet with the durability of tile.

The use of a lighter color for the tub and shower surround adds contrast, then they've finished the space with bright white molding and creamy beige on the walls, blending everything seamlessly.

This is a really unique design; the honey-colored wood cabinetry and the dark brown hexagon tiles lend to a warm and cozy feel in the space. However, neither of those take away from the main design feature which is the patterned tile on the wall. It draws your eyes right in, adding color and style to the room.

The many warm brown tones make for a really inviting space while allowing the patterned tile to really shine. They've rounded out the accents with a nice potted plant and contrasting storage baskets, really tying the space together nicely.

Check out this blue storage basket on Amazon.

Even for a small space, this half bath packs a big punch. They have chosen a larger brown tile for the floor to make the space appear larger than it really is, keeping most of the focus on that gorgeous shower surround.

The shower surround itself lends a pop of contrast to the space while they have matched the walls to the flooring. The silver fixtures and use of lighter grout help balance it all out.

In this more country farmhouse-style space, they have thrown an area rug down to tie in the blue and white from the walls.

The rich dark wood vanity ties in perfectly with the softer beige flooring, and they've added a pop of contrast with the wainscoting and near-white vanity top. This is another design that could easily be applied to existing brown floor tiling.

Here is yet another example of applying a design to an existing tile job. This is a perfect example of how a not-so-modern tile job can be turned into a modern space.

They have smaller-sized brown tiled flooring that was popular in the late 90s and early 2000s paired with dark grout. The shiplap on the walls coordinates with the grout in the brown flooring and the shower curtain.

Then to contrast, they've used a white vanity with a grey-toned counter to complement the grey-toned shiplap on the walls.

This design incorporates a multitude of different-sized tiles. They've arranged the same tile color up the shower surround in a contrasting pattern with the floor. They've chosen a lighter grey grout to create a small contrast, yet it still blends into the tile color scheme.

The pops of white brighten the room up and give it a sleek, clean feel. The result is an earthy yet elegant, open space.

Here is an example of a more modern brown bathroom. Again, this is a great example of how brown can really work with so many different colors. Who would have thought brown and blue-grey would work so well together?

The stone tile adds texture to the space while the grey gives it a modern flair. The dark contrasts really work without making the space appear like a dark cave. The use of contrasting brown and white towels adds a nice finishing touch to the space.

Brown is a great neutral earth tone to pick for your next bathroom renovation. As shown above, it can coordinate with a multitude of different colors, creating many different kinds of stylish spaces. It doesn't have to be boring old beige!

Even if it's not in the budget to replace the flooring in your bathroom space, there is still so much you can do with brown tiles. Even though you might not think it, you can probably refresh that bathroom space with existing brown floor tiles, transforming it into your dream bathroom.

We hope this list of floor tile ideas has encouraged you to work with what you have if this is the case. If not, we hope to have inspired you to incorporate brown into the design process for that dream bathroom remodel!

If you have enjoyed this article, please consider the following for further reading:

What Color Towels For A Beige Bathroom? [6 Great Ideas!]

How to Change Bathroom Tiles without Removing Them