Having end tables adds dimension to whatever room it is in. They also come in handy to set a drink on and are often used for the purpose of decor. You are probably wondering if nightstands can be used as end tables. For your convenience, we brought you the answer.

A nightstand can absolutely be used as an end table. Nightstands and end tables are very similar in height and size. End tables typically go in a living room on either side or both sides of a couch. They are also helpful in a bedroom if you do not have a nightstand and vice versa.

It is helpful to be resourceful in using nightstands as end tables if that is what you have to work with. Are you thinking about the difference between a nightstand and an end table? Or whether or not a nightstand is a table? What is another word for a nightstand? Keep reading to learn the answers to those questions and more. 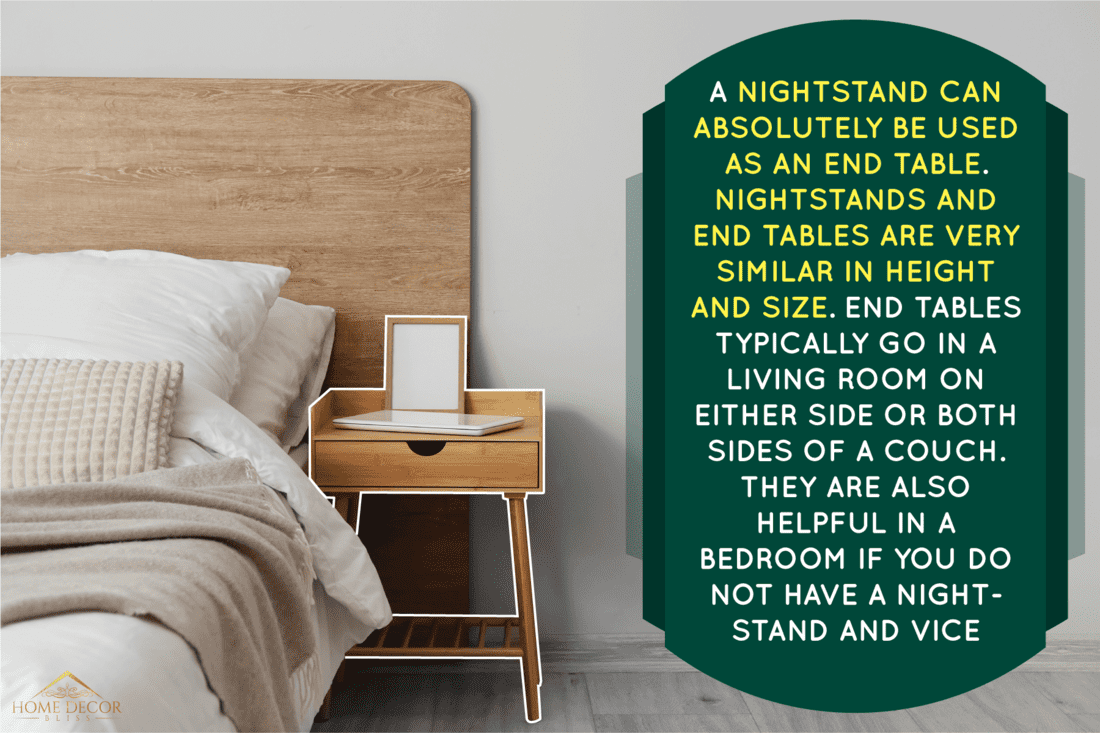 What Is The Difference Between A Night Stand And An End Table?

We have researched all about what makes an end table different from a nightstand. Both nightstands and end tables add style to the space that they are in. There are not a lot of differences, but there are a few. Let's dive in.

You may not even notice if someone has a nightstand serving the purpose of an end table. The main difference between a nightstand and an end table is that nightstands tend to have a drawer or storage built into the table. This is a convenient feature for any room. 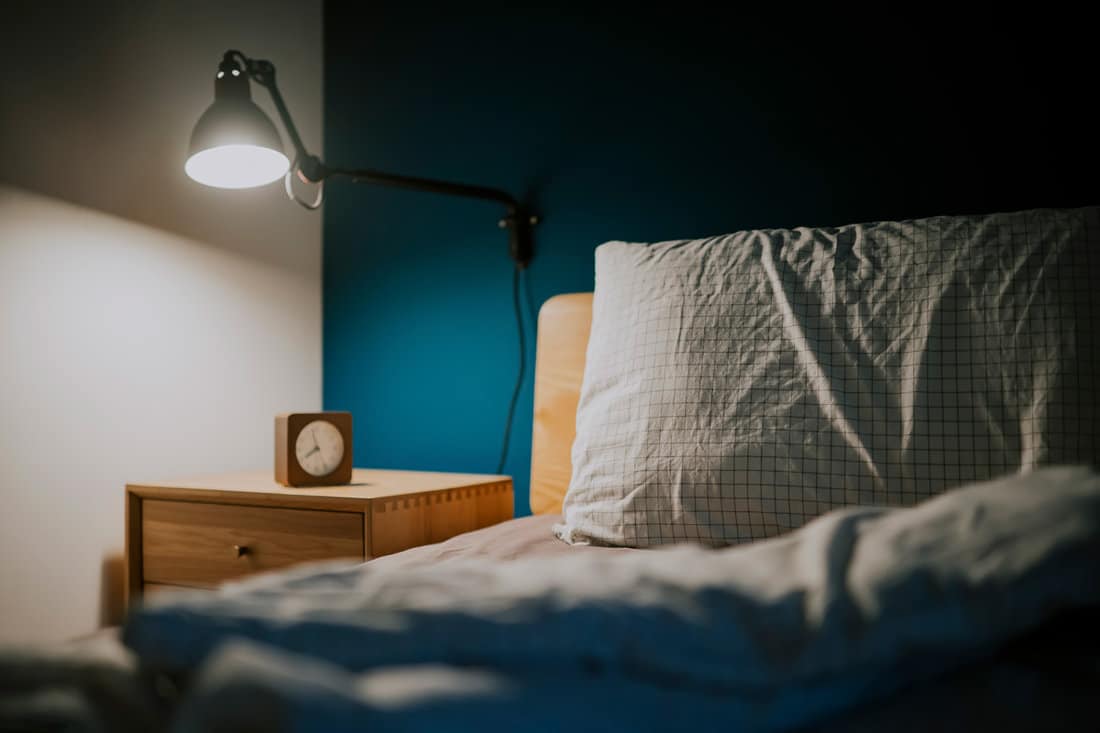 Another difference between a nightstand and an end table is that nightstands are not quite as decorative as end tables. Oftentimes nightstands have a little shelf built into the bottom of them where you can keep a blanket or items that you may need to have within arm's reach.

If you have a choice of how tall your end table or nightstand is that is standing in for an end table, a couch is approximately 25 inches tall.

In the case that you don't want your end table to be taller than the arms of the couch in your living room, purchase one on the shorter end of the spectrum. A table that is about 20 inches tall is still tall enough to sit beside a couch without it being taller than the sides of the couch.

Is A Nightstand A Table? 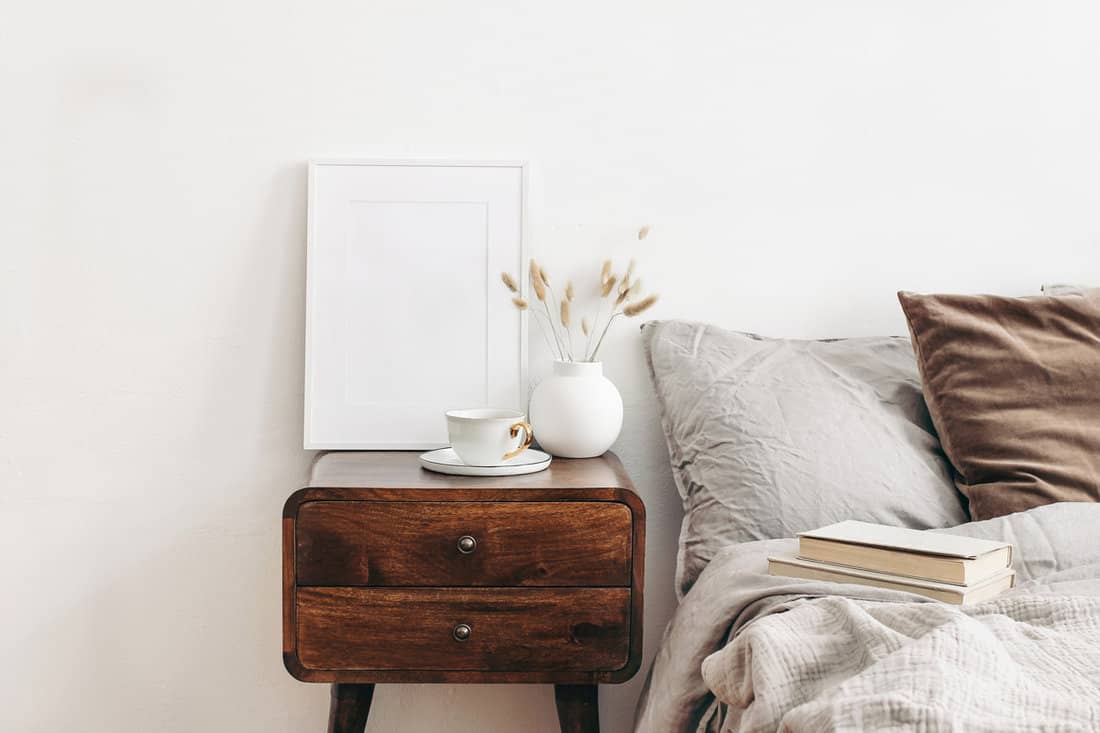 Yes, a nightstand is technically a table, but it is more than that. Nightstands are multifunctional.

End tables are simply a table with legs attached to them. A nightstand, on the other hand, more commonly has some type of storage space, such as a drawer. Most people keep things they may need on hand while in bed such as tissues, nighttime medications, lotion, a pen, a notepad, and lip balm, for example.

Read more: What Do You Put In Nightstands? [9 Nightstand Essentials]

Because a nightstand is not only a regular table like an end table, it provides you with a space to keep all of the extra little things you have—small things like pens, nail clippers, a nail file, matches, or a lighter for a candle that sits on your nightstand. These are all handy to keep nearby.

The corner between couches is a perfect spot for a nightstand or end table. This way someone sitting on either couch has the option to set down their drink or phone beside them.

Nightstands are typically the appropriate height to place beside a couch instead of an end table if that is what you have to work with or what you prefer. The extra storage is a bonus for any living room.

What Can I Turn A Nightstand Into?

You can set your drink or plate on a nightstand when needed. Some people like to decorate their nightstands and use them as a piece of furniture that helps them express themselves. 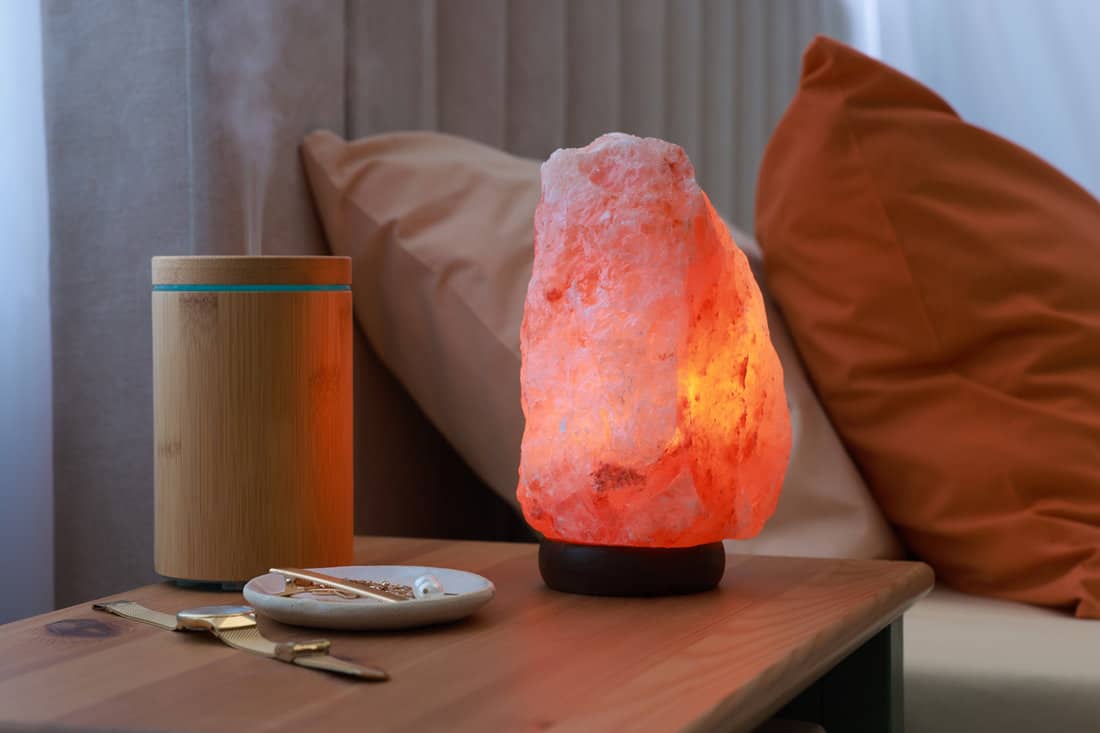 Many people enjoy having a lamp on their nightstand. A small table lamp is helpful for those of you who like to read. Himalayan salt lamps are a good boost for your mood and are great for any room in your home. They clean the air and are the perfect size for a nightstand.

Click here to see this salt lamp on Amazon.

Using a nightstand in place of an end table is really convenient, as there is a space built into storage. Usually, there is a shelf at the bottom too.

Both features make it easy to switch out end tables and nightstands interchangeably. The shelf at the bottom is a perfect space for books and magazines whenever you are using it as an end table.

As for the drawer, it can be used to store the remote so it does not get lost. Pens, a notepad, and anything else you may need close by work well for this storage space.

What Is Another Word For Nightstand?

Another word for a nightstand is a bedstand, bed table, and most commonly, a bedside table. If someone says "bedside table," they are talking about the same thing as a nightstand.

They are typically placed beside a bed which is where the name comes from. A nightstand is the perfect place to keep a glass of water and anything else you might need to have near you in the middle of the night. 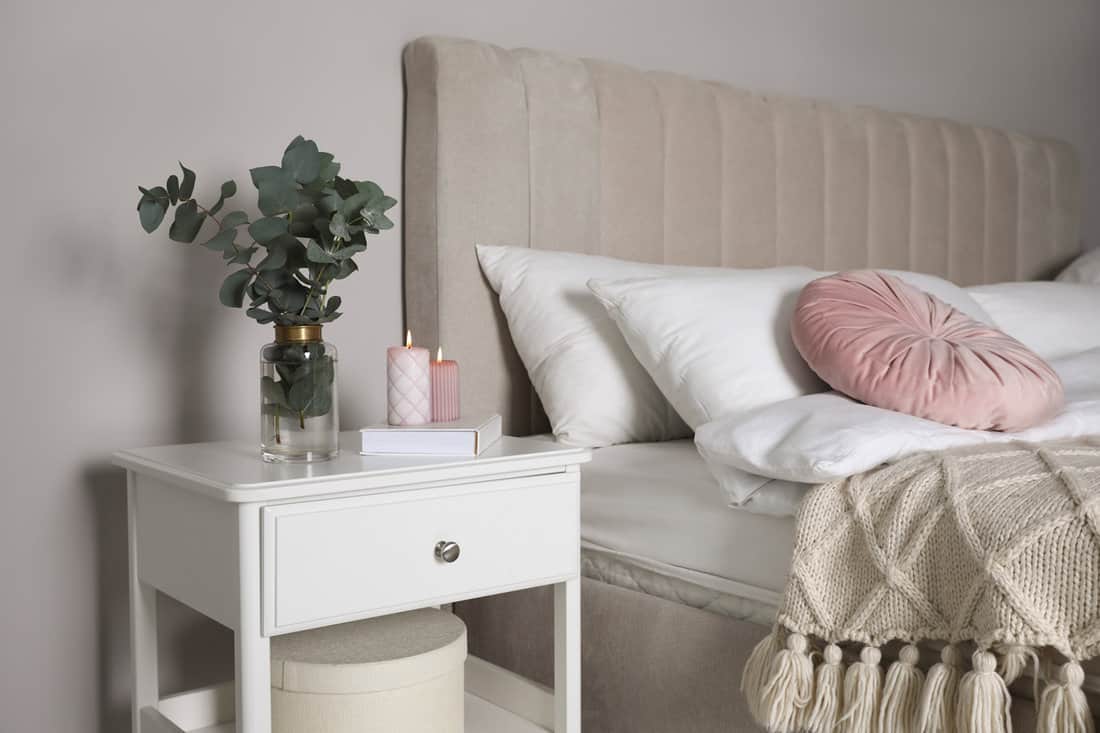 What Can I Use Instead Of An End Table?

If you do not have an end table but you want to have tables beside your furniture, you can use a nightstand. A TV tray will also work, but they are not nearly as sturdy.

It is important to use a sturdy table whenever possible so that it can hold a drink, remote, and whatever else you need it to be used for. A nightstand is the best alternative for an end table.

Another alternative for an end table is to install floating shelves. They provide a sleek and modern way to decorate. You can use a barrel, stool, a crate or two stacked on top of each other, a trunk, or chest, or even a dresser in the place of an end table as well.

Click here to see these floating shelves on Amazon.

Some nightstands have a built-in charger or USB port. This adds another level of convenience to your living space. You can use a nightstand in the place of an end table wherever you need to. It is always helpful to keep a box of tissues on one of your end tables and/or nightstand also.

As for smaller living rooms, a nightstand or end table that is not quite as wide will work out better. The bigger the tables, the less space you will have, but this is pretty much only a concern for smaller-than-average living rooms. 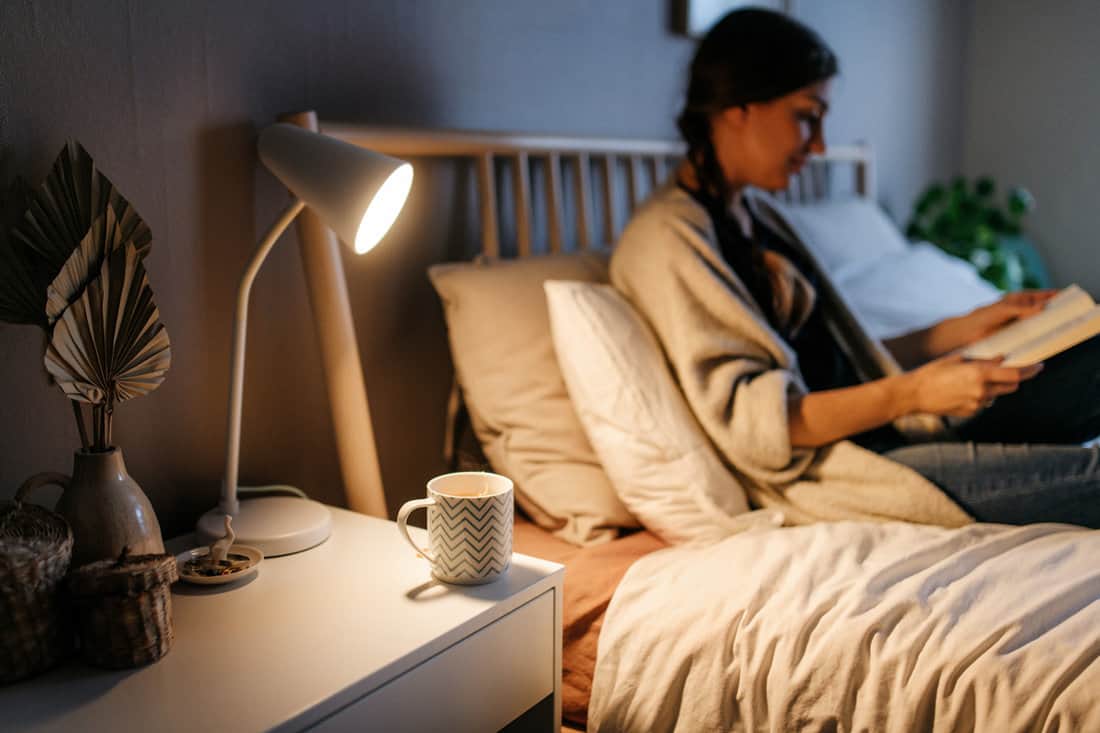 The answer to this question depends on your personal preference. They definitely add more to a room than they take away from it.

End tables are a great space to decorate, show off your sense of style, have a place to set your coffee mug, and are generally just nice to have. A nightstand has the additional perk of having a drawer. End tables are still beneficial in their own ways though.

If you never have a drink in the living room or guests don't either, then the end tables are not necessary. They are a good place to add a small plant, lamp, or picture frame to brighten up the space.

Whether or not you want them in your space has a lot to do with your lifestyle. If you have children, having end tables can come in handy because they usually have a sippy cup and snack on hand.

Should You Match Coffee And End Tables?

No, it is not necessary to match your coffee table and end tables. If you want to that is totally fine, but your nightstand or end tables will still look fine and fulfill their purpose even if they do not match.

If both your coffee table and end tables or nightstands that are being used as end tables are wood, you can potentially sand and stain them to match if you so choose.

To Wrap It Up

All in all, a nightstand will work as a great substitute for an end table if that is all you have to work with. Other than a couple of inches in height and storage, there are not very many differences between end tables and nightstands.

Before you go, check out the following links related to end tables:

11 Great End Tables With Storage For Your Living Room

How Many End Tables In A Living Room?