Ceiling beams are a bold yet cozy feature of any interior design. They are simply joists that have been deliberately exposed. Allowing guests to see the support frame of the roof can be an intriguing move, but it might be tough to find the right color. You can paint your ceiling beams with just about any color on the market. But there are still some basic rules and ideas that should help get you started. So, we have carefully researched what colors are best for your ceiling beams.

The best color for your ceiling beams should change to agree with the existing style of the room. However, using brighter colors is typically best for any ceiling. That’s because most rooms grow brighter from the floor to the roof. This is done to make the space feel more open. That aside, you could still match the style you want with many different colors:

Whether you’ve just moved in or need to repaint the ceiling beams you already have, it’s a challenge. You’ll be working high up, and altering the ceiling can seriously transform the feel of the entire room. Keep reading to learn why some colors work best for ceiling beams and how to match them with other features. 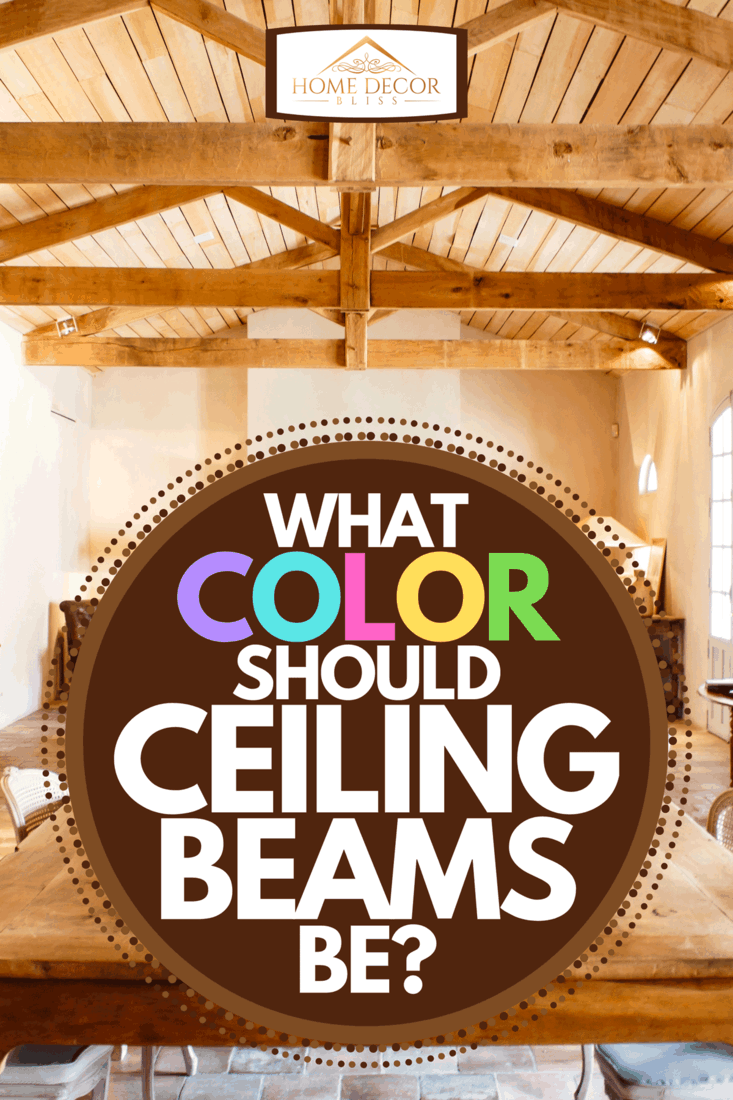 Should ceiling beams match the floor?

First, you need to understand the relationship between the ceiling beams and the rest of the room. Ceiling beams do not need to match your floor. In fact, the floor is probably the darkest color in the room. This grounds the space, providing a visible canvas for everything to stand on. But if you paint the ceiling beams the same color as a dark floor, the roof will feel much lower.

Besides, it is rarely a good idea to use two identical colors in any interior design. This creates a sense of redundancy that is boring to look at. So instead, most interior styles use colors that exist within the same family. They will either be slightly lighter or darker, separated by only a shade or two. You can read this post to learn more in-depth if ceiling beams should match the floor.

Should ceiling beams match the ceiling?

It is generally suggested to let the ceiling beams match the ceiling itself rather than the floor. The ceiling is probably already a brighter color. This will allow the room to flow naturally upwards. Your eyes will be drawn towards the roof, making the area feel taller.

If you paint your ceiling beams the same color as your ceiling, the wooden joists will disappear altogether. This is a rare exception to the rule of avoiding identical colors. That’s because ceiling beams are a structural piece of framework, which is traditionally hidden from view to begin with.

Then again, it can also be a wasted opportunity to let ceiling beams blend into the ceiling completely. You can add a lot of personality by introducing just a little color up there. This is true even if you allow just one shade between the ceiling and the beams.

What color to paint ceiling beams

It will take a lot of effort to paint over every exposed ceiling beam. You will need quite a lot of paint, and you’ll certainly need a ladder for the job. Otherwise, you might consider hiring a professional to take care of it for you.

Click here to find this reliable ladder on Amazon.

Either way, it’s a lot of time and effort. And the color you choose for your ceiling beams will have a major impact on any room. So, you should plan for the ceiling beams properly.

You should allow the style of each room to dictate the color of the ceiling beams. For example, exposed joists in a nursery would feel quite different from a dining room. If the entire home shares one universal interior design, such as a French scene, then let the beams agree with that.

You can use just about any color for your ceiling beams. But you need to understand where each option is ideal and understand what style they could create.

Should I paint my ceiling beams black?

Black is the darkest of the neutral colors, which are technically absent of any actual color. This means that black can work with most other colors, and also greatly reduce the room's temperature. Darker ceilings also feel much lower than brighter ceilings.

This will ultimately cause a pinching effect because most floors are dark to begin with. If there is darkness both above and below you, then the extra volume of shadows can unbalance the area. It can even make the furniture and fixtures in between feel like they are floating in their own space.

Black is always a staple in modern and minimalist scenes. But the goal of these styles is to create sleek, smooth, and open areas with little decoration. Unfortunately, an exposed wooden joist will always have a natural appearance. Even if you paint the ceiling beam jet black, the texture can conflict with a modern look. As long as the ceiling beams are not wood, you can paint them black for an industrial or modern style. 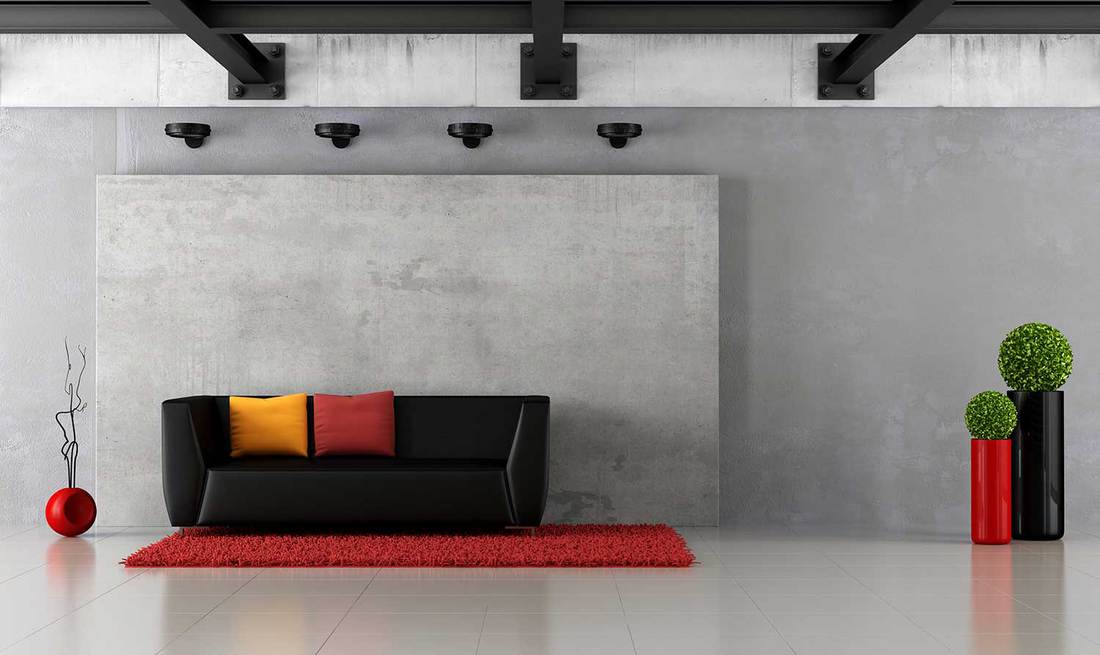 A black wooden ceiling beam will work best with ceilings that are a natural wooden brown. Or, black can help create contrast with a slightly dark ceiling. For example, Chinese, Santa Fe, and Mediterranean styles use rich and bold reds. Black would agree with darker reds, whereas brighter ceilings would make the ceiling beams pop too much.

Should ceiling beams be painted white? 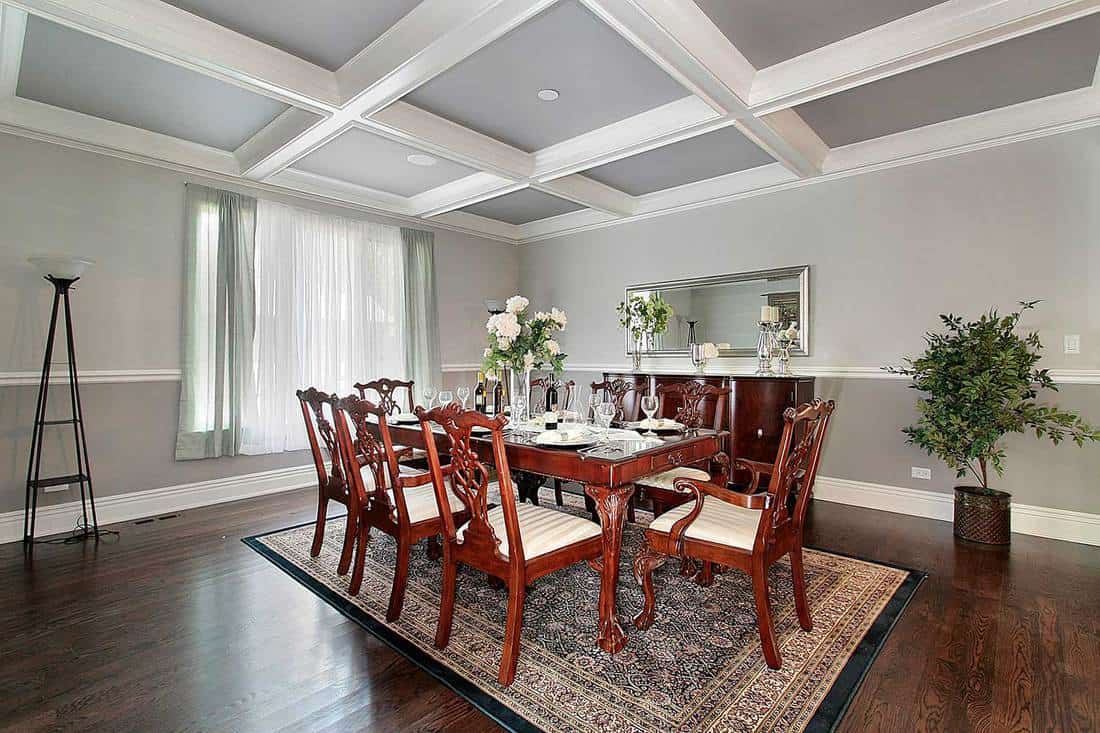 White is the most popular color for interior design because it is the brightest neutral. It will work with literally anything because white reflects all colors. This makes white an ideal color for ceiling beams. White can brighten the ceiling without making the beams a distracting focal point. True, the high temperature of white may cause too much contrast with darker ceilings. But most ceilings are not dark anyway. 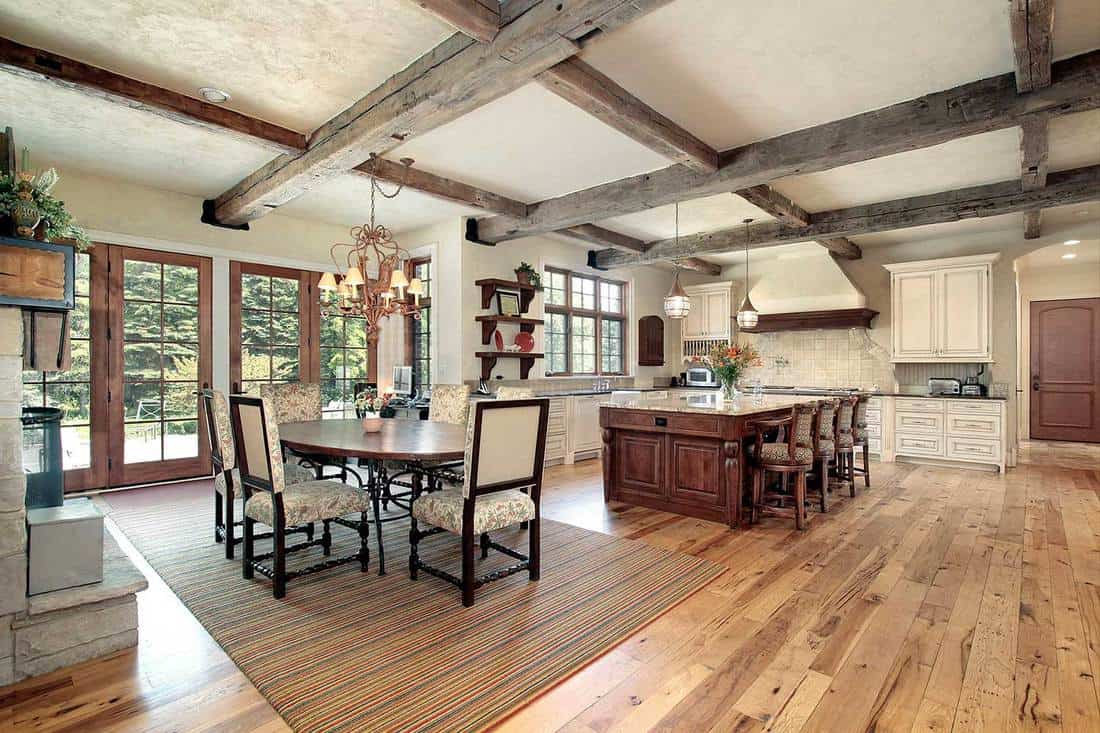 Gray is a cool neutral that won’t cause as much contrast as black. This makes gray a terrific color for ceiling beams. It will also agree with the natural look of a wooden beam. Different species of wood, such as walnut, can have naturally gray undertones. For example, you can use gray to make your ceiling beams look like beach wood for a Coastal interior style.

Blue and green are perfect colors for any kind of wood. That's because the colors blue and green are always found in nature, from rainstorms to forests. This makes both of them an ideal candidate for natural wooden ceiling beams.

Blue and green are also known for their range of shades, including everything from the darkest oceans to the brightest mint. In fact, using sky blue is perfect for a ceiling. So, you can use just a shade or two darker on your ceiling beams to let the ceiling feel just like the actual sky above. But blue and green are also flexible enough for modern, abstract scenes. 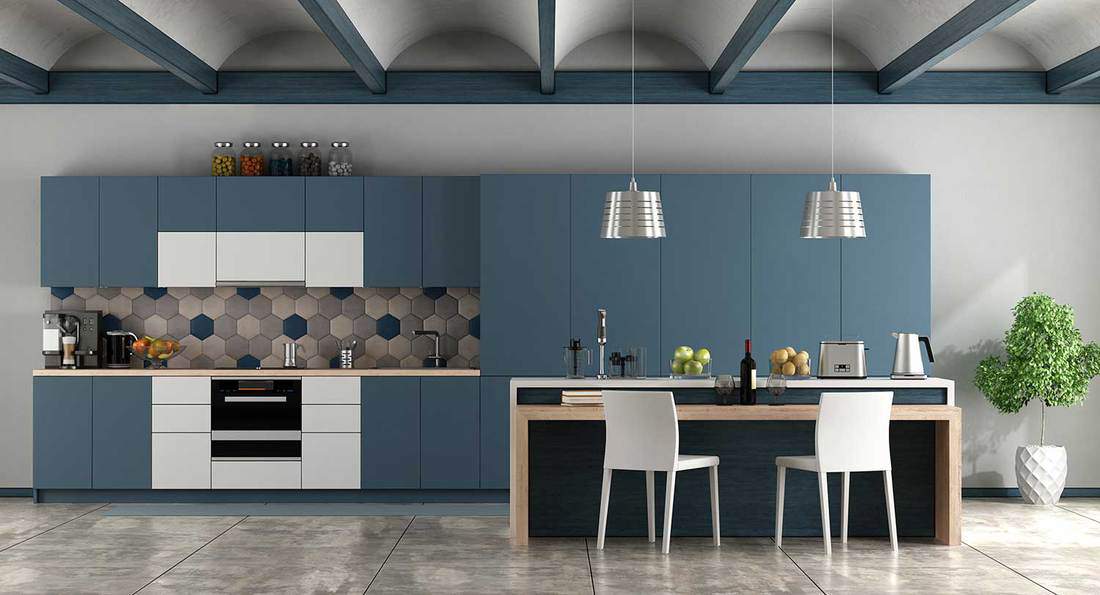 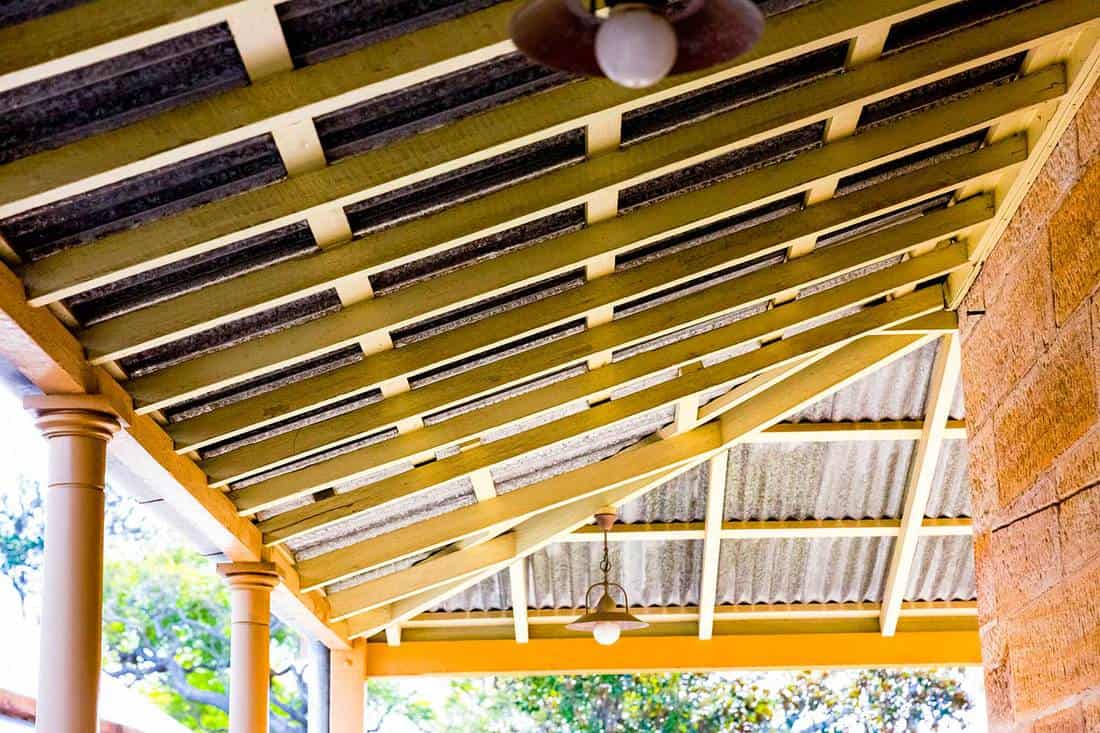 These colors are the brightest you can get without using white. Rose and yellow are already popular outdoors and in nurseries, kitchens, or dining rooms. They make the area feel warm, airy, and flowery. That garden personality will agree with wooden ceiling beams, too.

Rose is often preferred instead of pink because the latter is just too powerful. Rose is a great way to use pink without all of that signature sharpness. Yellow should also be a more subdued shade. That’s because, unlike a living room with many features, there is no way to create a bridge between ceiling beams and the ceiling. 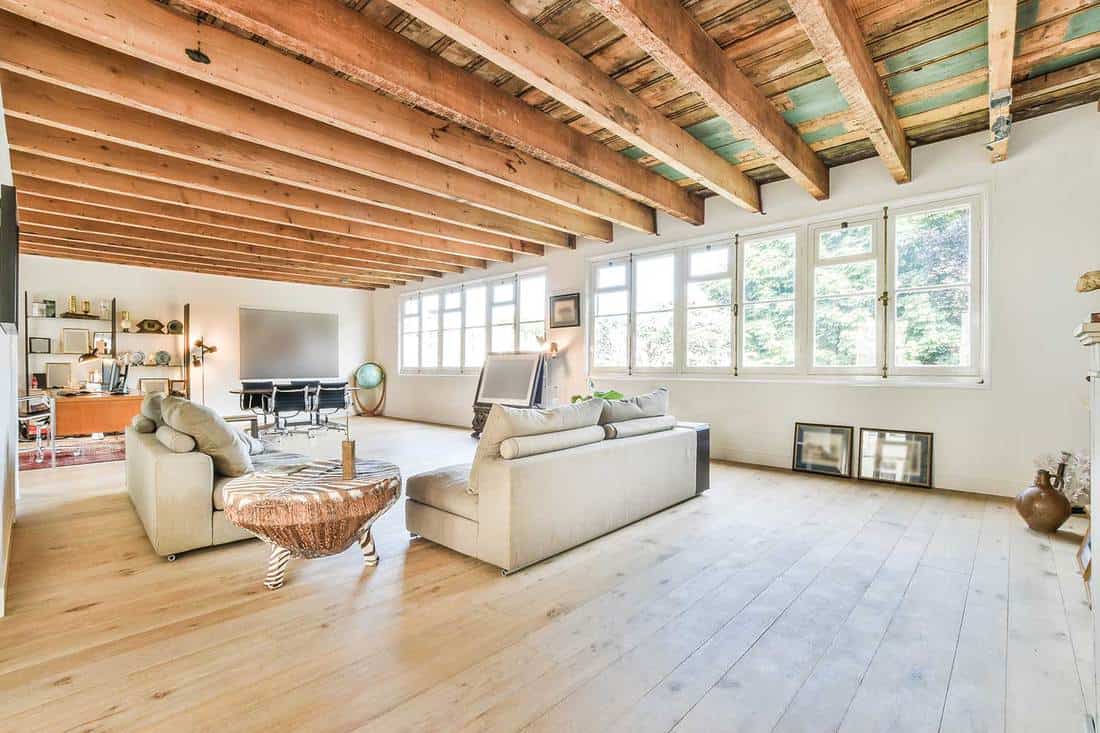 Click here to see this clear wood finish on Amazon.

This will allow the ceiling beams to feel like a cozy, homemade farmhouse. This is also similar to a cottage or beach house. Each of these interior designs will typically allow some kind of vintage, weathered look throughout the room. Wood can make a perfect fit for these purposes.

Generally speaking, wood is just one of the most versatile looks in interior design. This means that you won’t have to repaint the ceiling beams every time you restyle the room. You can also read this post for 17 wood ceiling beam ideas.

Ceiling beams are just as striking as they are important. Exposing the roof's wooden framing is a daring style. If you don’t want wooden joists sticking out of the ceiling, then you can now style the ceiling beams to soften their impact. But now you also know how to add colors that will let the ceiling beams sing their personality above the room.