If there is one place that has been romanticized in popular culture, it's the French countryside. It's the place where romance novels happen, where Belle from Beauty and the Beast is from, and that also just happens to be inextricably linked to subtle undertones about good cooking. Is it any wonder, then, that it's a classic decoration style for people who want an air of sophistication while keeping things rustic?

Country French decor is always in style, especially if you live out in the countryside. So, how do you get this beautiful Euro aesthetic going on? Well, it takes a lot of thought and planning. The eleven inspiring ideas below will help you make the most of your decorating efforts. 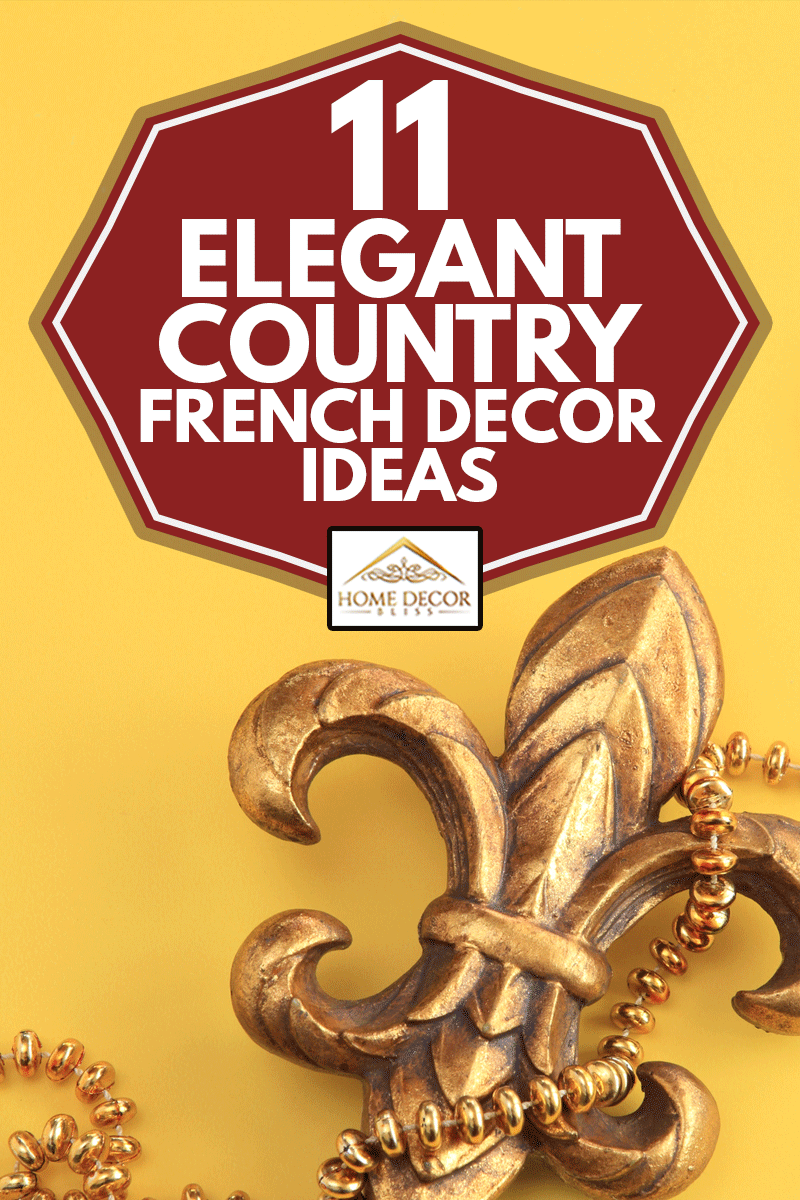 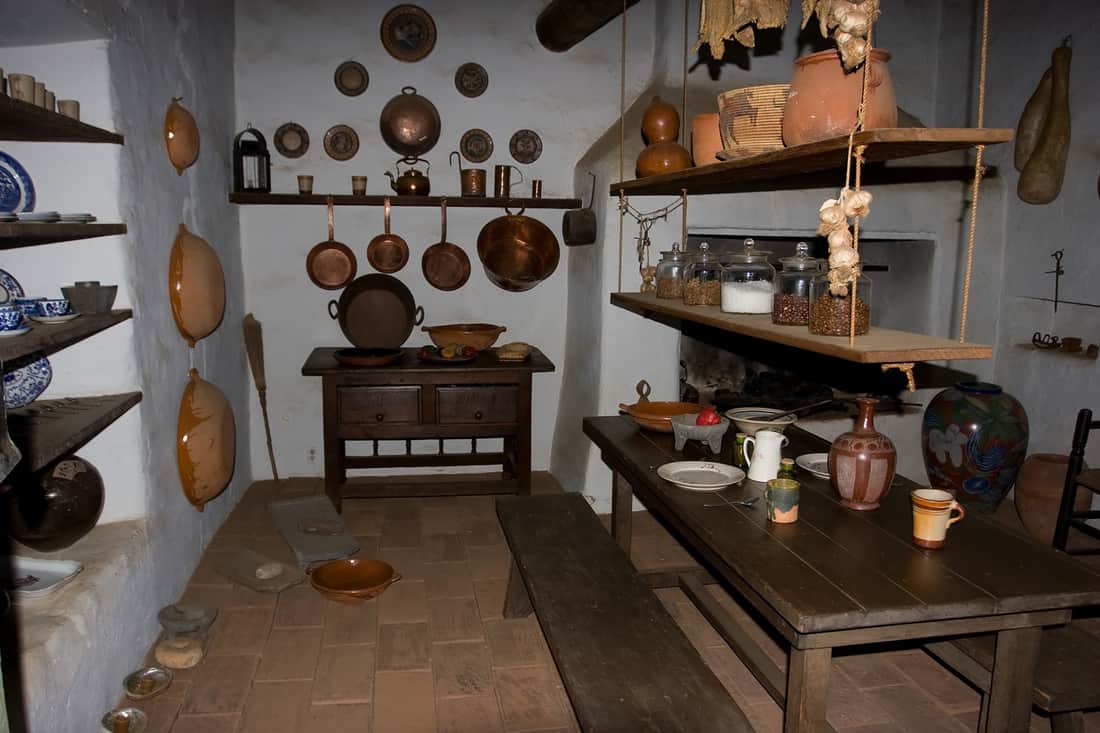 When you're working your way into a country French kitchen, food prep utensils are the number one focus. After all, the French love their food! This photo points out something important to consider: your cooking tools can be an aesthetic statement too. Cast iron and copper cookware, when properly displayed, add a rustic touch to any kitchen.

The cool thing about this kitchen is that the architecture helps emphasize the French countryside vibe. Of course, the china on display helps a bit, too.

Click here for a copper pan set from Amazon.

2. Heavy On The Florals 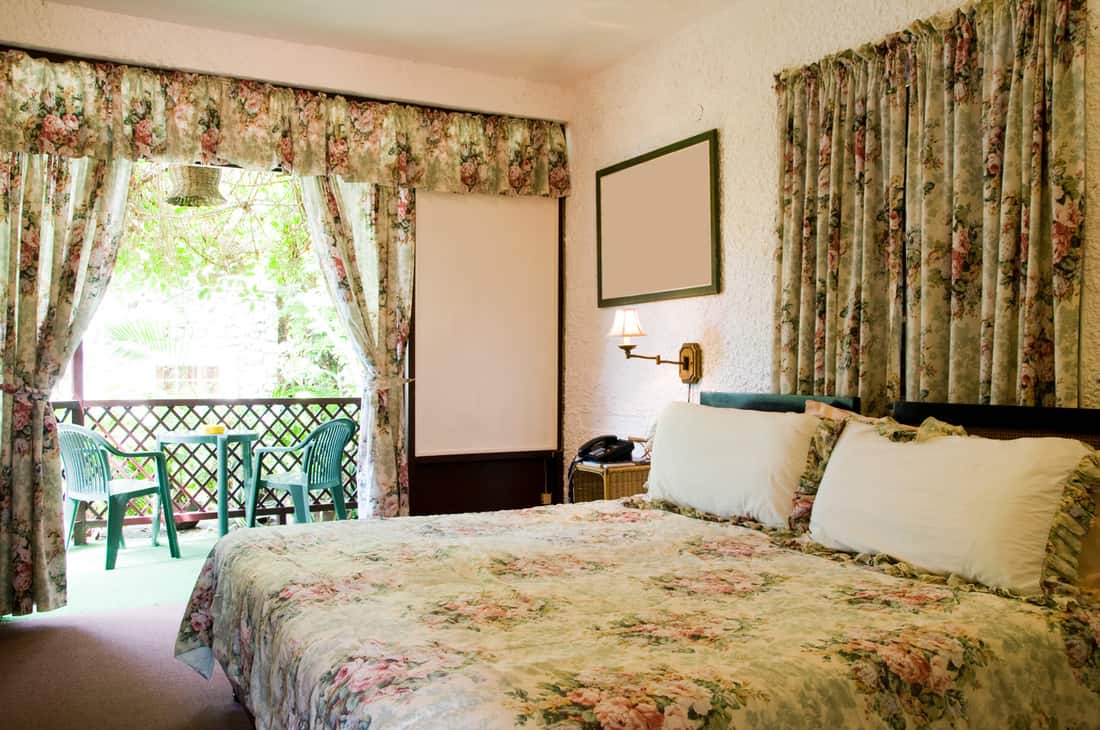 If nothing else, French country bedroom decor tends to go heavy on the frills and flowers. It also happens to work pretty well with sage green. This room shows exactly how to work the French vibe with green walls, using classic floral patterns on the bedding and curtains. Overall, it's a feminine yet chic look.

If this looks a little old world, that's because it's supposed to be. The extra lighting from the outdoors, paired with the warm mood lighting, makes it work.

Like most other country styles, French country is marked by heavy use of wood that's been made to look worn and weathered. More specifically, it usually focuses on furniture that's been painted in pastel colors with a slight crackle effect. You can take a look at this photo and see what we mean.

While many people enjoy DIY'ing this look, you can also find cabinets, tables, and nightstands on the market with the same aesthetic. It's a major link to France, so go for it to your heart's content.

French designs often involve a heavy amount of cushioning and tufted looks. If you are putting together a bedroom, dining room, or living room, this will translate into a need for a lot of padding. Ideally, you'll have extra cushioning everywhere. In this bedroom, we see a tufted bed that is absolutely covered with elegant throws, as well as a bench at the foot of the bed with a leather tufted cushion.

When you add in the pillows' embellishments, a rich and sophisticated take on pastoral French work comes to light. It's a decadent yet still country feel. That's France for you.

Click here to get a white French pillow from Amazon.

Also, like other country styles, French country decor tends to take advantage of home tools that lay around the home. One of the most common things people use to add a country twist is a bucket, or in this case, a milk pail. The French print on the pail gives this accessory a charming, innocent vibe.

To make it extra country, the bucket was used as a vase. Roses, being a very French thing, were a perfect pick.

Most country French rooms will have tons of white, cream, pink, green, and gold accents. However, that doesn't mean that blue decor is out of the question. It's all about getting the right pattern on your sheets. Here, we see a worn print that harkens back to the days of carved, stamped prints on French newspaper done up in blue and white, alongside a distinctly French print.

Adding to the country vibe is the blue and white gingham underneath everything. You can't get more rustic and beautiful than this.

The fleur de lis is considered a major symbol of France, and it's one of the most popular symbols found throughout the country's history. Unsurprisingly, many chateaus, mansions, and farmhouses throughout France have a fleur de lis inside them somewhere. Its symbolism is similar to an American flag in the United States.

This metallic fleur is done up in a worn metal paint and is hung up elegantly above a table. It doesn't get any more French than that, nor does it get any more royal.

Did you know that chickens are a major symbol of the French countryside? It's true! Actually, one could argue that it's generally a European countryside thing thanks to Spain and Portugal. Adding chickens to a kitchen design is a great way to give your home the ambiance of a kitchen out in the middle of Provence.

This kitchen designer decided to add a backsplash featuring hens and a rooster, pecking away at the ground. It's a comforting look that adds a layer of coziness to this already-rustic vibe.

Lighting makes a pretty big difference in how a room looks, and country French designers know that. In this room, we see all the traditional French home elements, plus a little pretty vine. What makes this room feel most inviting, though, is the warm glow coming from the table lamp in the corner of the photo.

A traditional table lamp is one of the best table lamp choices you can make for this particular aesthetic. Adding a cream lampshade helped bring the warmth in beautifully.

The French word cloche translates into bell, and it's regularly used as a term to refer to the large glass bell-shaped protectants as seen in this photo. Cloches are used to help protect sensitive items (traditionally, foods or flowers) from the elements by giving them an airtight lock while also displaying the contents inside for the world to see.

Today, cloches are known for being an elegant way to showcase certain items. It's a great way to add some country French style to your room, all while keeping things elegant. We suggest using cloches for jewelry, mini statuettes, dried flowers, or clocks.

Click here to get a decorative cloche for your home, straight from Amazon.

Even if you don't know much about France, the chances are that you know that this country is famous for its perfumes. It has been for centuries, and much of that fame has to do with the many, many professionally grown flowers in the French countryside. That's why one of the hallmarks of traditional country French decor is flowers...lots and lots of them!

Several flowers are considered to be very french. Lavender is an obvious choice, but then again, so are roses. If you want to make your home feel more French, the easiest way to do it is to add decadently large bouquets on the tables. Maybe it's time to give a call to the florist, don't you think?

That might be the end (or la fin) of our country French decor ideas, but we hope it is just the beginning for your creativity to run wild, bringing the romance of France into your home!