Want to know the deck joist dimensions? You are on the right page! We've researched this topic to help you address all of your questions.

Your deck joists' dimensions are determined by the International Residential Code (IRC). The most popular deck joists are 2x6, 2x8, and 2x10-inch treated lumber with a span of 9 ½, 13, and 16 ½ feet, respectively. The deck joist size depends on the span, spacing, and wood species.

In this article, we’ll go over everything you need to know about deck joist sizes. We’ll go through the installation steps and offer some wood species suitable for your deck joist. 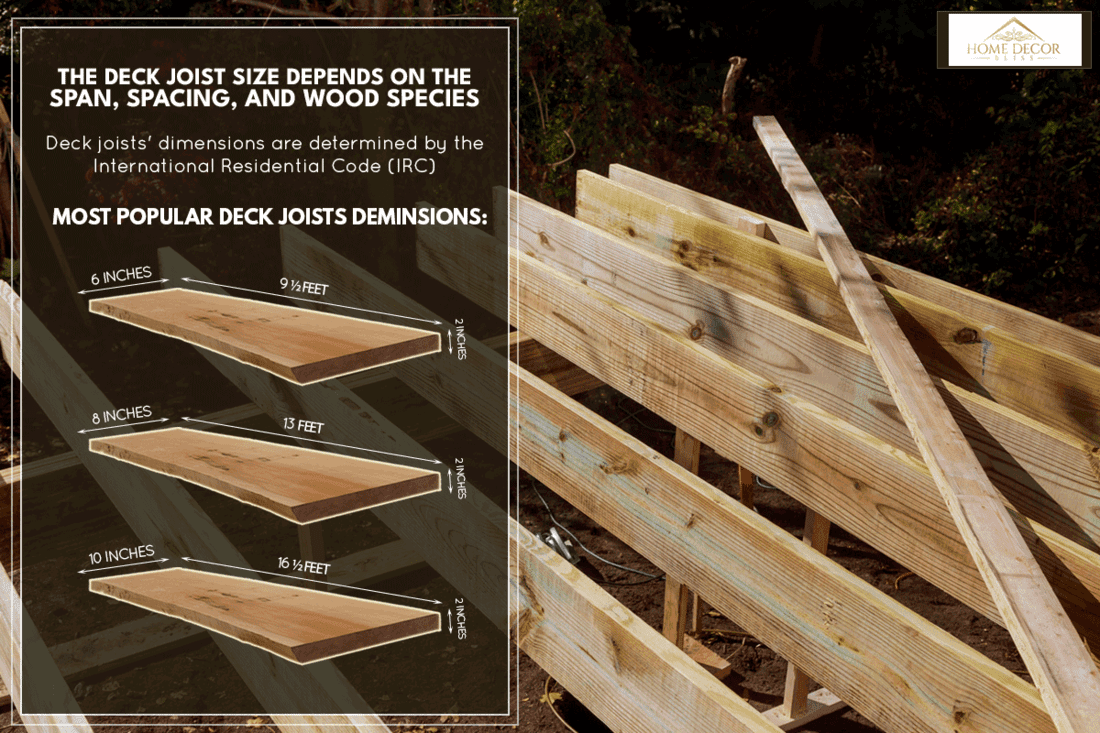 What Is Deck Joist?

A deck is a humanly constructed platform typically attached to a home. Most decks are made of wood, suspended above the ground, and supported by substantial posts and beams.

The deck support beam that firmly fastens the floorboards to the deck is called a deck joist. With joist hangers, these joists are attached to the deck's main header board and post beams. Deck joists are repeated structural components.

The smallest joist size required for deck construction depends on the span between bearing points, the species and grade of treated lumber used to make the joists, and the distance between the bearing points. The minimum weight requirements for a deck floor are very strict according to the building code.

What Size Should Deck Joists Be? 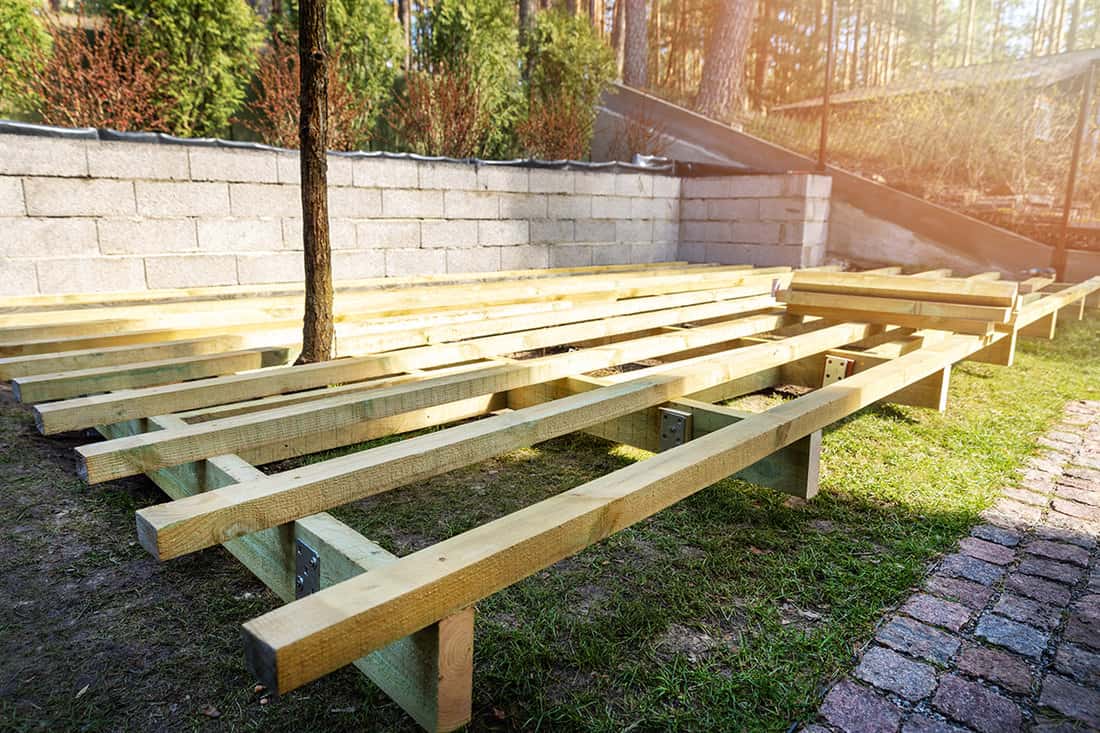 The minimum joist sizes are subject to IRC regulations. Your deck joists must meet the minimum size required to support a live load of  40lb/ft2. Deck joists are commonly measured in 2-inch thicknesses. Deck joists typically come in widths of 6, 8, 10, or 12 inches, with 6, 8, or 10 inches being the most popular measurements.

The deck joists' span, or length, in dimensional lumber, ranges from 8 to 16 feet or longer. The length of the joist cover without bending or requiring support for typically available joists is 9 ½ feet for 2x6 joists, 13 feet for 2x8 joists, and 16 ½ feet for 2x10 joists.

The factors that affect span include grade, dimensions, spacing, species, use, and load. You can select the size that complements the dimensions and overall design of your deck the best. You need larger joists as the size of the deck increases.

How Far Apart Should Each Deck Joist Be? 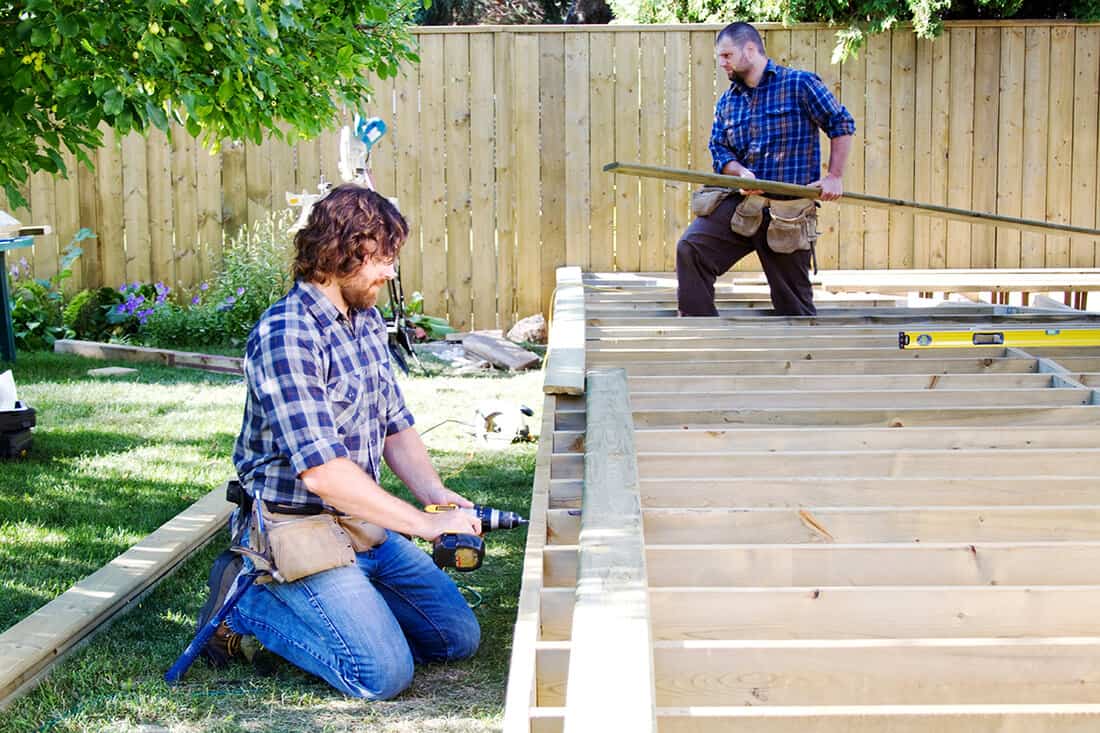 The typical deck joist spacing or the distance between the joists is 16 inches on center, though it can vary from 12 to 24 inches. For special purposes, such as stairways or commercial structures, a 12 inches spacing is used.

For detailed instructions, refer to the installation manual that is included with your decking. You can find additional information about the rules governing the maximum joist spacing for decking in the IRC.

The size of your deck, the beams, the foundation of the deck, and the kind of decking you intend to install will all affect your chosen deck joist spacing.

What Species of Wood Are Available?

A great resource for deck joist sizing and span information is sought after by many homeowners. The available deck species are listed below.

It is the most typical kind of wood used for roof rafters and floor joists. It is strong, resistant to warping and shrinking, and available in longer lengths. The main drawback of using it is that it can be expensive compared to other types of wood and isn't always readily available.

It is also known as hemlock-pine. Because Douglas fir is not always readily available, hem-fir is a good substitute. This wood can be used in most circumstances and has qualities similar to Douglas fir.

It is a wood that works well for building decks. It scores highly for durability, weather resistance, and strength. Because it was easily accessible and affordable, it has always been a favorite for construction.

The fact that Ponderosa pine frequently has knotholes or other flaws that necessitate additional work during deck construction is a drawback for some homeowners.

There are fewer color options available than those for redwood or cedar decking, so painting might be necessary if you can't find what you need in this lumber species' natural form. 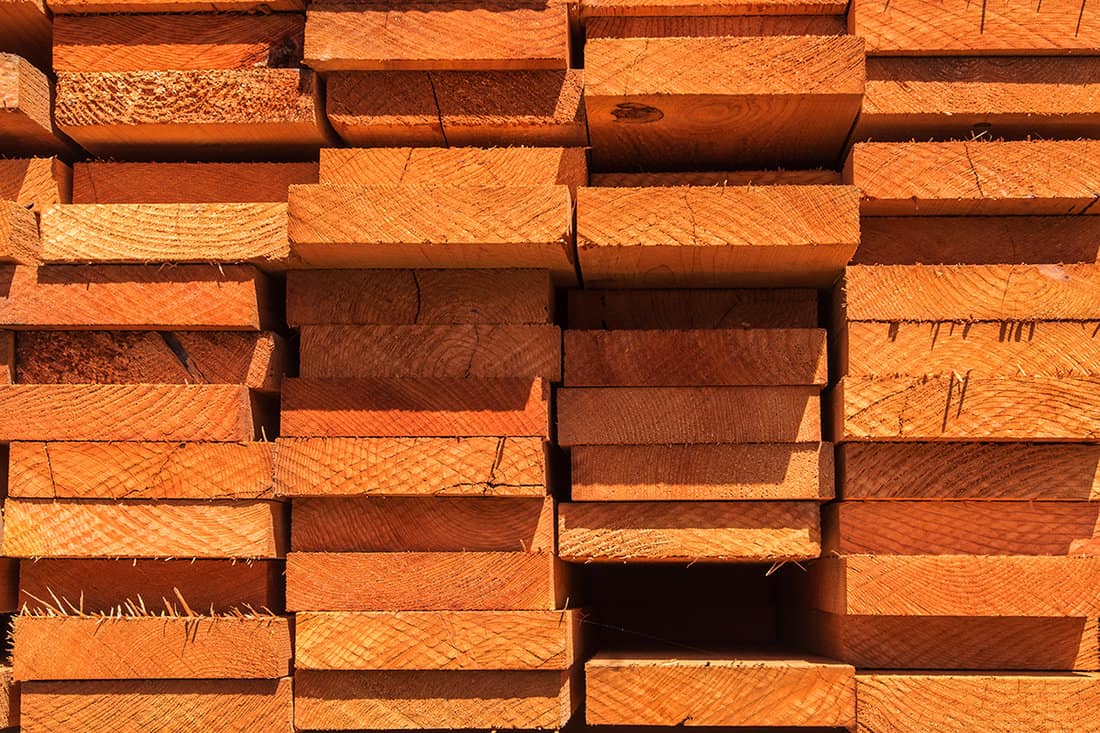 North America is the natural home of the wood species known as redwood. It is among the most widely used types of lumber for decking because it is durable and strong. Redwood can also be stained or painted to match any color scheme. Redwood decks typically last longer than other decks made of cheaper wood species.

Southern pine is a strong, warp- and shrinkage-resistant material that works well for floor joists. Compared to other types of wood, southern pine has several advantages, including being less expensive. The main drawback is that it is susceptible to termites and decay.

It has the lowest strength rating of all species but is also the least expensive. Given that it won't warp or degrade quickly, it makes a good choice for areas where moisture is probably a problem. Spruce should not be used in locations with heavy humidity or snowfall because it can easily be damaged.

The Pacific Northwest is home to a species of wood called western cedar. They are frequently used for decking because they are sturdy, weatherproof, and naturally resistant to decay. Decks made of western cedar can last up to 30 years with proper care.

How To Install Joist For Decking? 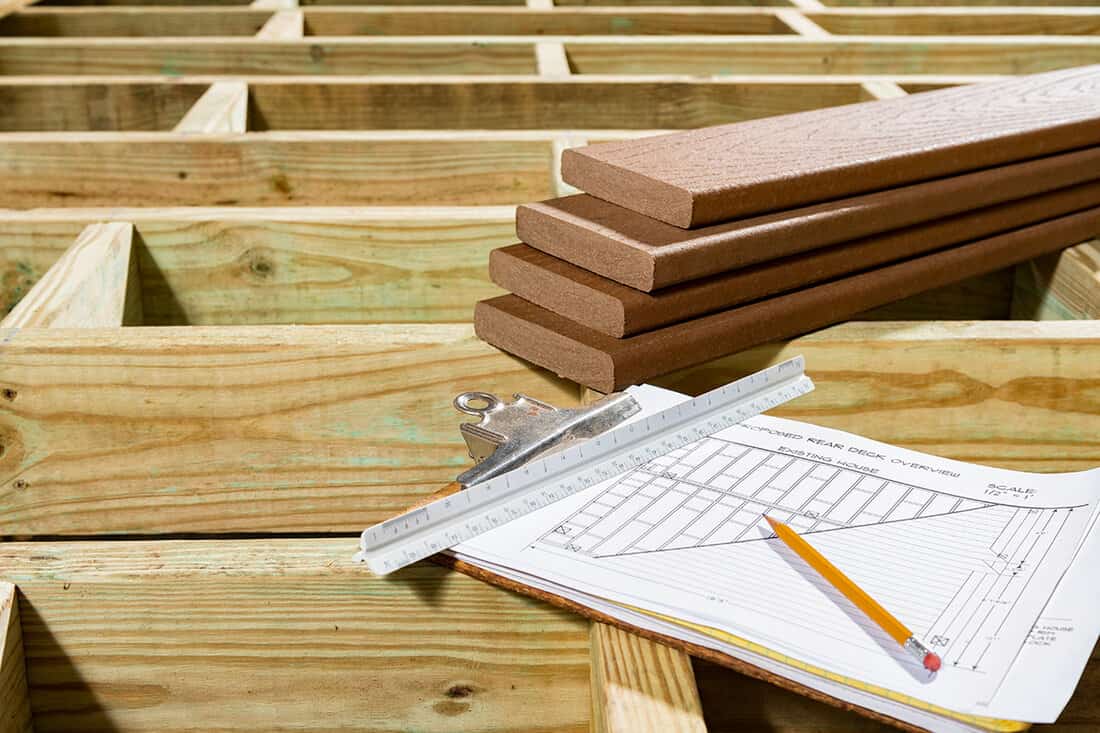 Learning how to space floor joists is crucial to the safety of the finished product as they play a crucial role in the structural integrity of your deck. Start by checking the stability of any existing structures. The process of figuring out how to lay joists for decking can be made relatively simple with a plan and some hard work.

Working your way toward the other end of the rim joist, begin your layout there. Your first joist's location will guide the others' placement, making it easier to place each succeeding board. You can place the first joist into position for an angled corner by using a scrap piece of wood as a guide.

It can be helpful to plan the layout for the location of hanging hardware if you mark out floor joist spacing locations at 16 inches on center spacing on the header with a pencil and draw an X on the side of the line where you want your boards to set.

3. Connect The Joist To The Rim Joist

Before attaching the rim joist and first joist with screws or nails, make sure the top of the joist is flush with the header. The joist can be kept in place while the connection is made by using a support beam.

Click here to see this galvanized deck nail on Amazon.

Remember that toenailing boards are insufficient for winds of 75 miles per hour (mph) or more. You'll need to use hurricane clips to secure each in high wind areas.

4. Notch A Joist Over A Beam

Using a chisel, you can notch out a portion of the joist to level the deck frame. But be careful not to go beyond the maximum notch size permitted at various points along the beam spans. The joist was ¼ inches higher than all the others.

Compared to nails, structural screws that have a corrosion-resistant coating offer a much stronger connection. The expansion and contraction brought on by the wetting and drying of the lumber can cause the nail hole to grow over time.

To make sure the structural screws you're using with the right joist hanger, check the label on the box. Simpson Strong-Tie produces a complete line of approved hangers and structural screws.

The stability, durability, and safety of your deck depend on each one of the available nail hole spaces, so don't skip any of them. Failure to do so could void warranties too.

6. Cut The Rougher Edge Of The Board

Cut the 2x10 pressure-treated joist length using a speed square. When placing the board, pay attention to its crowning.

Install the other 2x10 pressure-treated joists sequentially after the first one. Be sure to install the joists with the crown side up, making sure any bowing in the board is facing up.

Don't forget that you can use your knee to lift joists. Connect beams at 16 inches on center or your required spans as determined above.

8. Install Hurricane Ties At Each Connection Between Beams

On each joist-to-beam connection, use a Simpson Strong-Tie H2.5Z Hurricane Tie or an equivalent. Again, avoid using nails and instead, use Simpson structural screws. Remember that hurricane ties are not a substitute for strong blocking.

Avoid finishing the fastening from behind the truss plate when installing ties on plated trusses because doing so could affect the hardware's functionality.

A video demonstration of the deck joist installation is shown on YouTube below.

Contractors commonly use 2x6, 2x8, and 2x10-inch lumber to make deck joists. To ensure that the material you select is suitable for your project and capable of supporting the deck, you need to consider its lengths, distance between the joists, and wood species.

Moreover, constructing a safe frame can be difficult because even the smallest errors must be corrected. By locating qualified deck builders nearby, you can make sure that your project is finished on schedule, to the highest standards, and in compliance with all applicable local codes.

Hopefully, you found this post helpful in getting started on building your dream deck! See our other related articles below:

How To Tell Which Way Floor And Ceiling Joists Run?

How Many Screws Per Deck Board?