You can usually tell immediately if there is a problem with your dishwasher. But if it's a faulty dishwasher float, which could result in serious trouble at home, you may wonder about the culprit and if you can fix it yourself.

We've gathered a list of possible causes for such concern, plus a few potential DIY fixes.

If your dishwasher's float isn't operating correctly, it may be because it is dirty or clogged. A problem with the guiding tube is another possibility.

To troubleshoot these dishwasher float concerns:

The float is an essential component of the dishwasher. Continue reading to find out everything there is to know why floats malfunction and what to do in these situations. Let's dive right in!

Why Is Dishwasher Float Not Operating Properly?

Most of the time, the float will function as it should, but food crumbs and other debris will often prevent it from doing so.

Another reason for the float switch not working is a problem with the guiding tube. The guide tube is at the bottom of the dishwasher basin and supports the switch. The switch might not work correctly if this tube is deformed or bent.

Insufficient water in the dishwasher can result in subpar cleaning. The float must be elevated for the dishwasher to fill with water. A damaged guide valve and dishwasher float is the most likely issue. 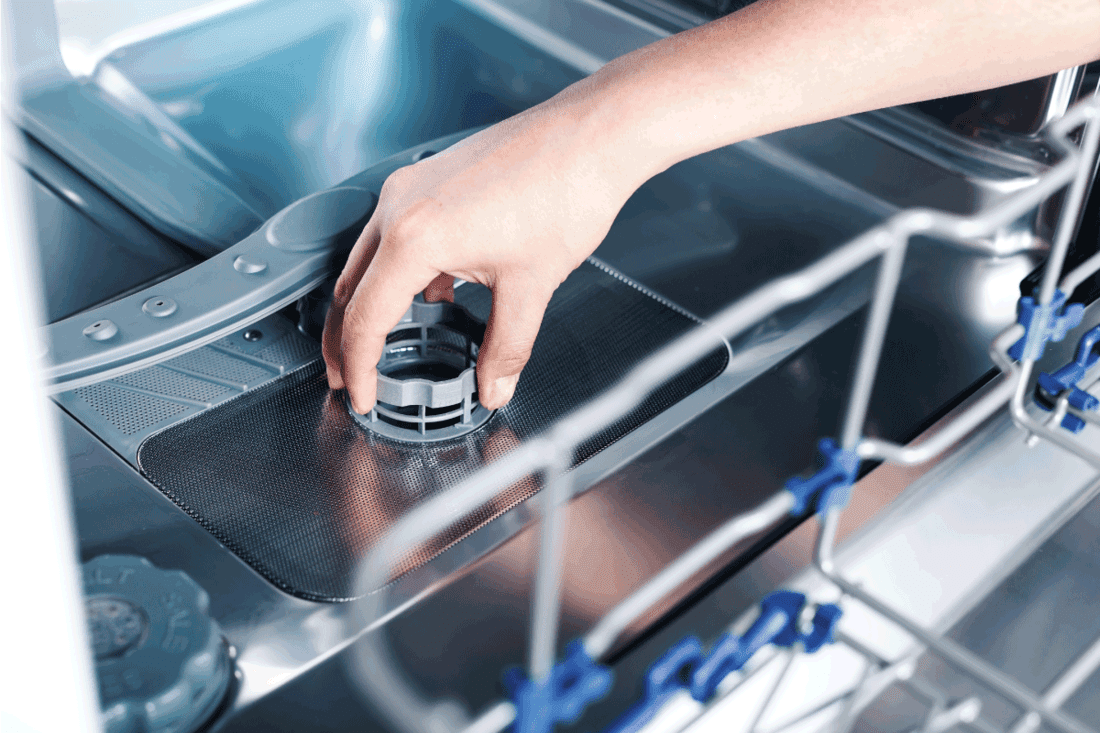 How To Fix A Faulty Dishwasher Float

The issues above create a risk to your dishwasher unit. So, it will help to be ready with these possible fixes for them: 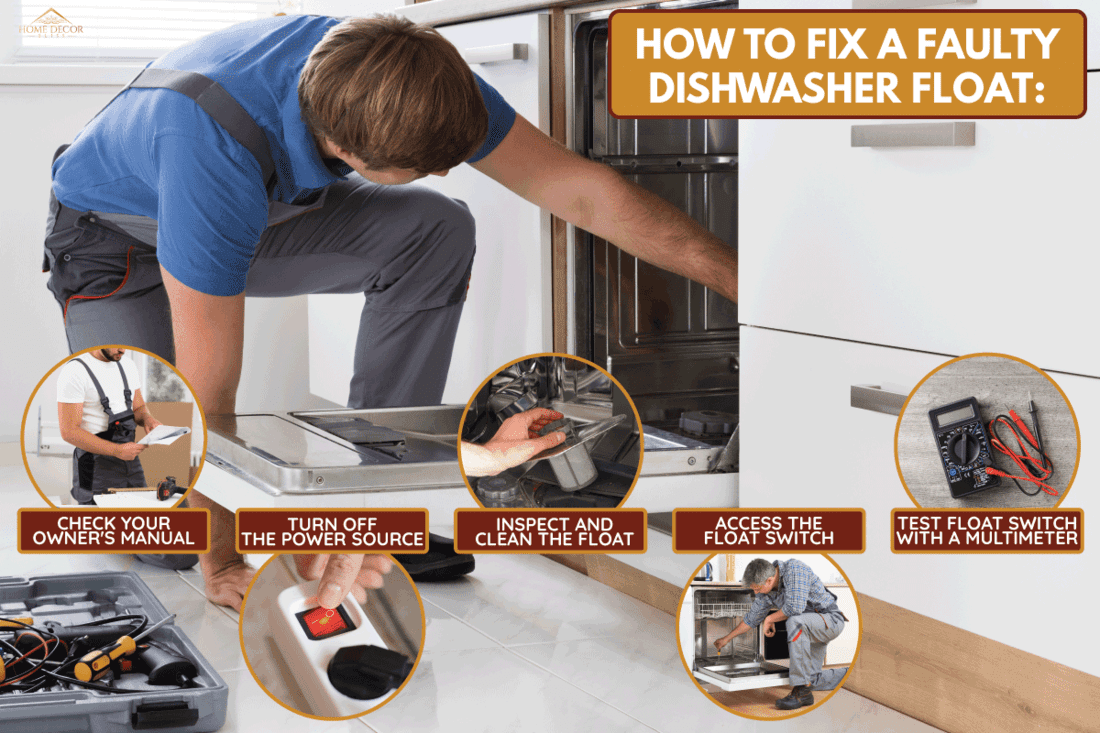 Like any other home appliance, dishwashers come with user-friendly manuals that answer all your questions about operating them—knowing where a broken dishwasher float is the first step in fixing one. Get that manual ready, and then let's begin!

2. Turn Off The Power Source To Your Dishwasher

Many dishwashers are connected directly to the house's electrical supply. The first step in fixing the dishwasher is disconnecting the unit from its power source.

Make sure you identify the circuit breaker assigned to your dishwasher and then turn it off.

3. Inspect And Clean The Float

Your dishwasher's float controls the amount of water entering the basin to prevent overflow.

When the water level is correct, the float rises and closes the water intake valve, preventing additional water from being pumped into the basin. However, food crumbs can occasionally contaminate the float.

Gently scrape the float to remove any buildup using a brush or tool, and scrape it out with a warm water-detergent solution. 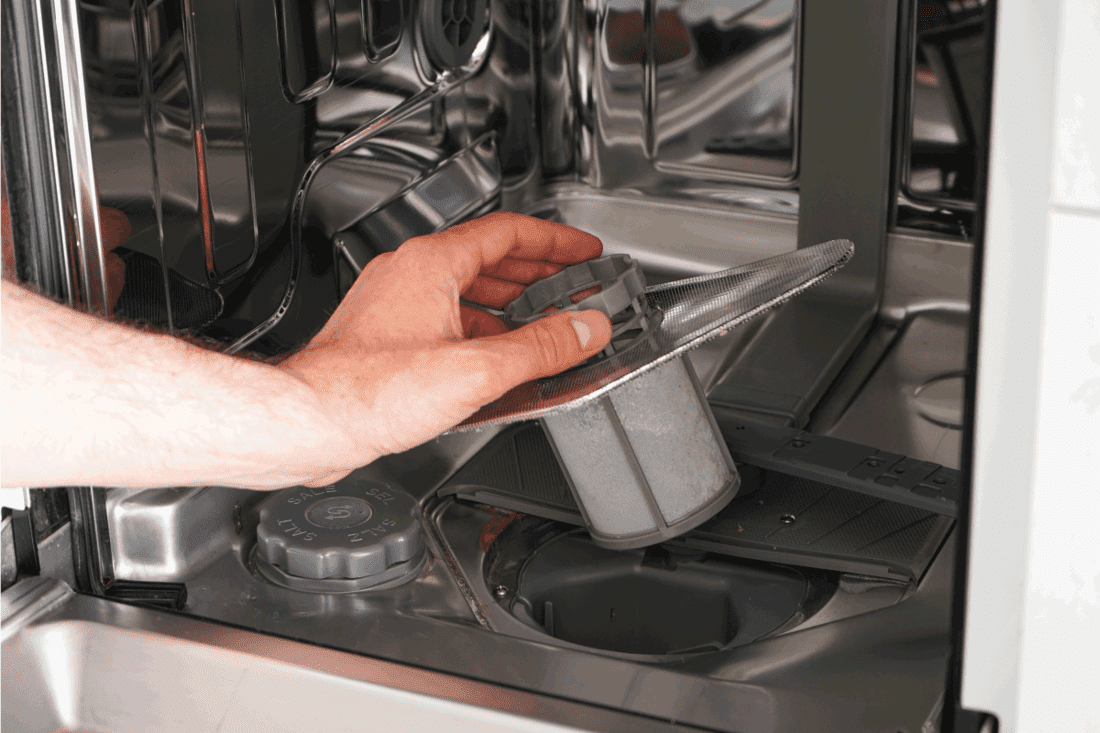 Additionally, you ought to clean the surrounding of the float. The float should function adequately once all buildup, filth, and food particles have been removed.

Lift the float and drop it repeatedly until it moves in the guiding tube without restraint.

If it doesn't move as expected, remove the float and check if you need to detach a retainer on the stem's end that may be hindering the float from lifting out of the guiding tube.

If you find any dirt, clean the float's guide tube thoroughly. Make sure it moves freely by checking the mechanical operation once again.

Click here to find the dishwasher cleaning brush on Amazon.

The lower dish rack should be removed when you've opened the dishwasher. If the dishwasher uses a stationary float cover, you must remove it. It will either be a snap-on cover or something that requires a screw.

The lower kickplate panel, which is right below the dishwasher door, can be removed to allow access to your switch. A few screws are often used to secure this panel.

To access the screws and remove them, you might have to open the dishwasher door. You will need to close the door once again to remove the panel.

It should be situated just below it in the access area. It will most likely be on one of the sides: the left or the right.

The float switch uses two different wires. These have to do with slip-on connectors. Labeling these wires will help you accurately reconnect them later, so do it now.

To remove the cables from the switch, grasp the slip-on connections and pull hard. Do not tug on the wires directly. You might find it helpful to use a set of needle nose pliers.

5. Detach The Float Switch From The Wires And Test It With A Multimeter

Check the switch with your multimeter. Set the device to the ohms setting x 1. Take each probe and attach it to a single switch terminal. The result should be either 0 or infinite. 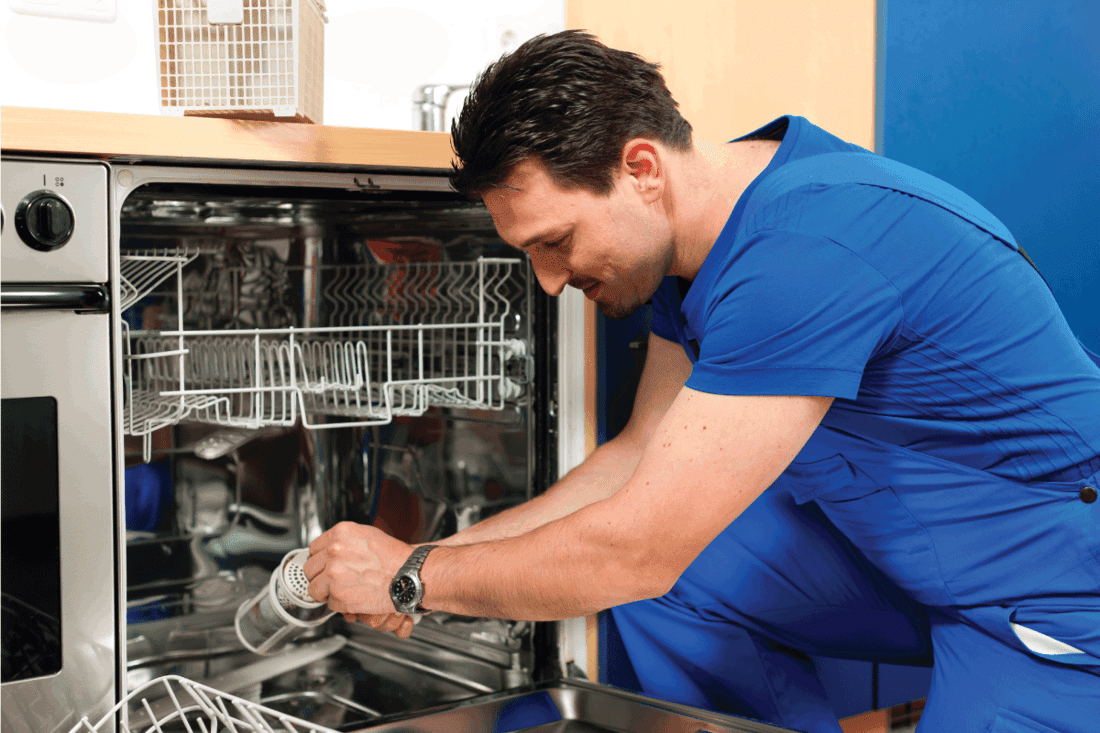 Keep connecting the probes to the terminals while pressing the switch button. The reading should shift to the other extreme.

Check out the video below for a visual guide on how to locate and test your dishwasher float switch:

If either of these tests fails on your switch, you may consider replacing it.

How To Replace A Dishwasher Float Switch

Generally, you can replace a broken float switch by putting in a replacement with the screws or pin and reconnecting the wires.

You can get float switches from the original supplier, online merchants, or hardware shops. If replacing the switch doesn't fix the issue, you may examine a few other things.

The water entry valve may be faulty or damaged, the drain valve solenoid may have failed, or the hose that fills the tub may be kinked.

For more details on the method of replacing a dishwasher float, watch this video:

Check out this dishwasher float switch on Amazon.

How Long Is The Lifespan Of A Dishwasher Float Switch?

Should You Repair Or Replace Your Dishwasher?

If you're unsure whether to fix or replace a faulty dishwasher in your house, look at the dishwasher's age, usage, cost of repair, and installation costs.

Find the alternative that will save you the most money long-term.

After carefully weighing all of these aspects, you can choose the option that makes the most sense.

If you've had to repair your dishwasher multiple times during the past year, that's another indication it's time to get a new one.

While the cost of a single repair now and then could be acceptable, if multiple parts start to fail, the appliance will probably stop working altogether.

You might be able to tell if additional parts are on the verge of falling by checking gaskets, seals, drains, and other easily accessible areas.

Most of the time, it is in your best interest to fix rather than replace: if your dishwasher is relatively new or repairs are affordable.

We hope we have helped you with discussing the causes of a malfunctioning dishwasher float and the potential fixes. While a faulty dishwasher float is a common issue, it can be so severe that it will need immediate repair or replacement.

If you enjoyed reading this article, check out these other posts:

How To Cover The Gap Above A Dishwasher [Quickly & Easily]

Does Costco Install Dishwashers And Other Appliances?