Dropped ceilings come in a variety of colors and materials to give your space some personality or color. They are a sort of veneer for your original ceiling structure, so they are not as sturdy and show leaks and stains earlier than traditional ceilings. Dropped ceilings reduce your room's height, usually an average of 3-8 inches. 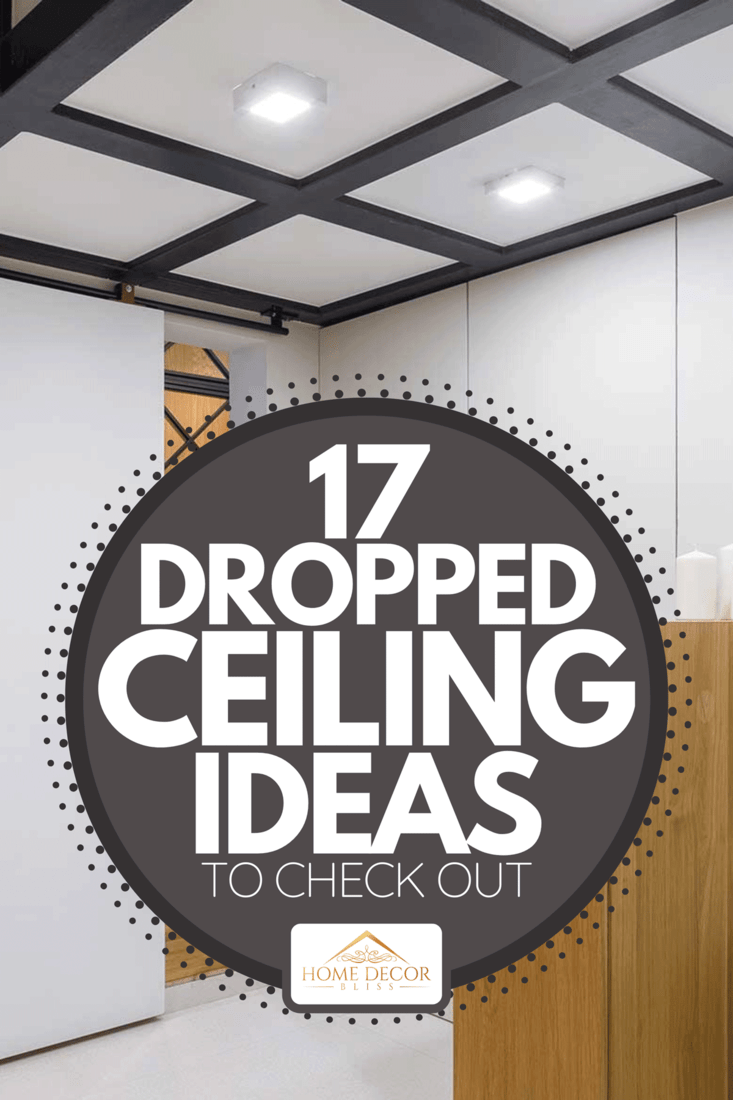 Metallic colors give your space a bright and shiny accent and highlight other colors throughout your room. For a metallic spin on a dropped ceiling, consider tin ceiling tiles as the material for your dropped ceiling. These tiles are often embossed with decorative patterns, which add a unique rustic touch to your space. Tin ceiling tiles, while visually appealing, can rust with moisture if not properly prepared with a polyurethane finish or paint. 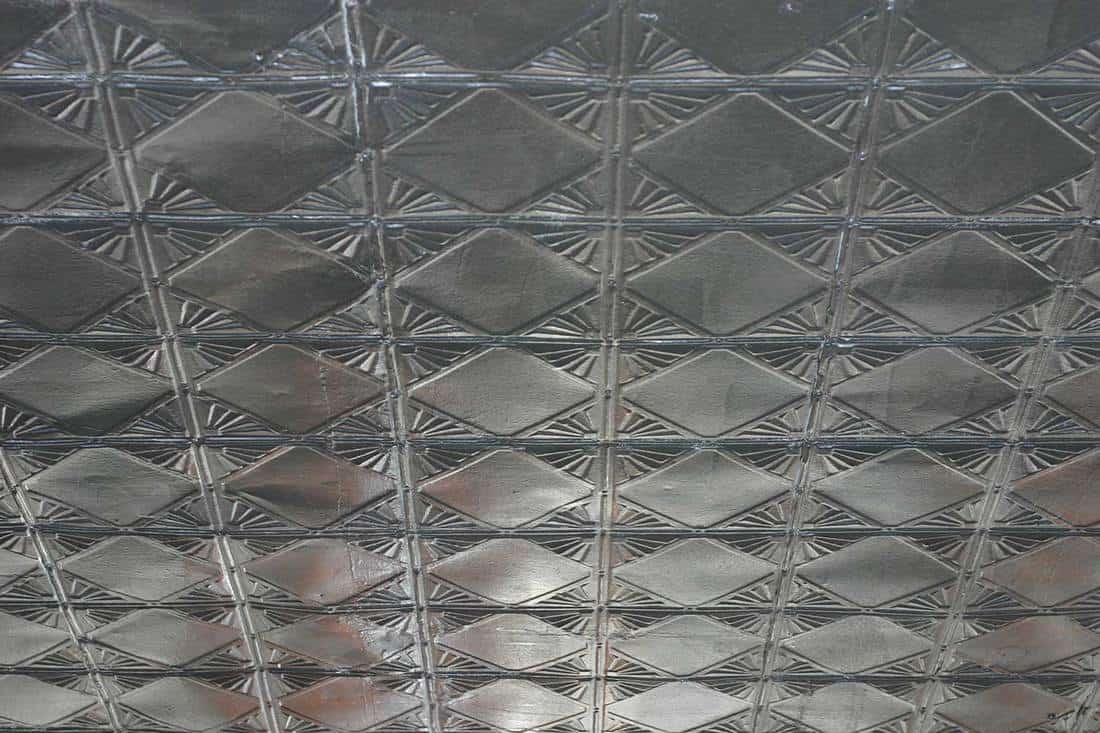 Crisp and clean, white ceilings can make your room seem taller and brighter. White tin ceiling tile has a ceramic tile appearance and adds a vintage classic look to your room. Whitewashing tin ceiling tiles also seal the tiles against rust, as discussed earlier. The white tin ceiling tiles in the example below have a warmer neutral color accenting the edges, creating a dimensional look. 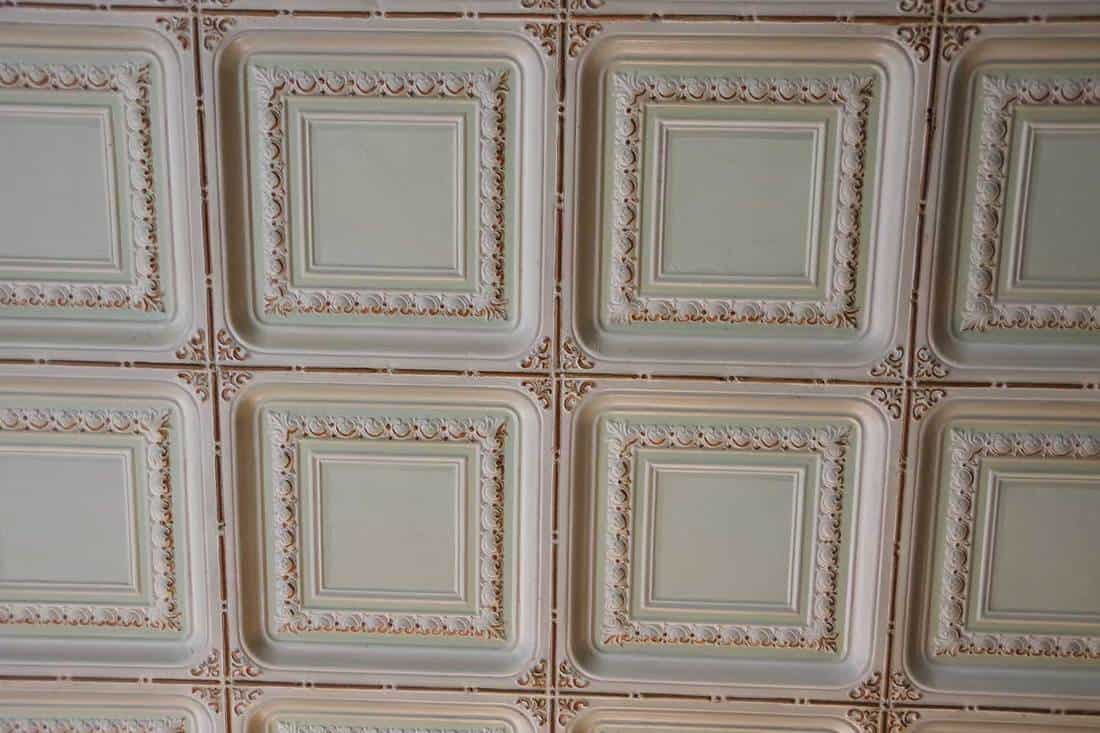 For a country-inspired look to your space, wood planks are a great option to use as the primary material for your dropped ceiling. Combining natural colored wood beams with a white plank background provides a contrasting appearance to the ceiling in the example below. The white wood combines with natural wood colors for this barn-inspired rustic look. 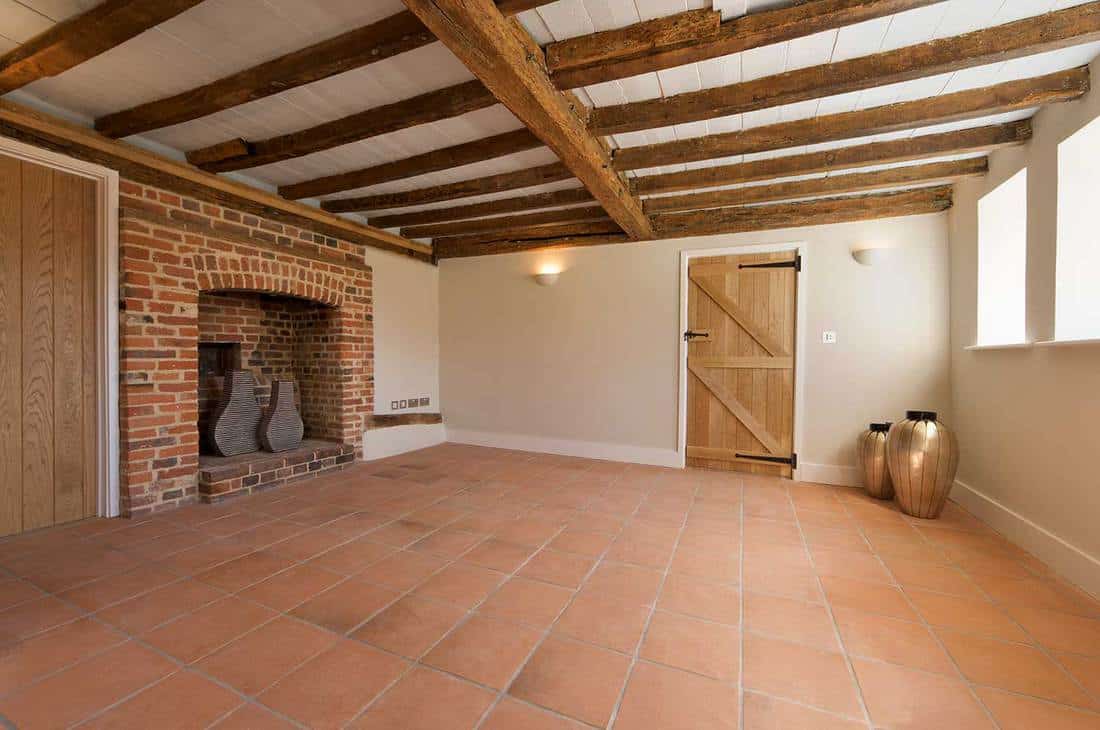 For a warmer spin on the wood plank dropped ceiling, consider a natural colored wood for the entire ceiling area. The warm neutral-colored wood plank ceiling adds a light neutral accent color in the example below. Black accents contrast with the warm neutral wood color for a cozy country ambiance. 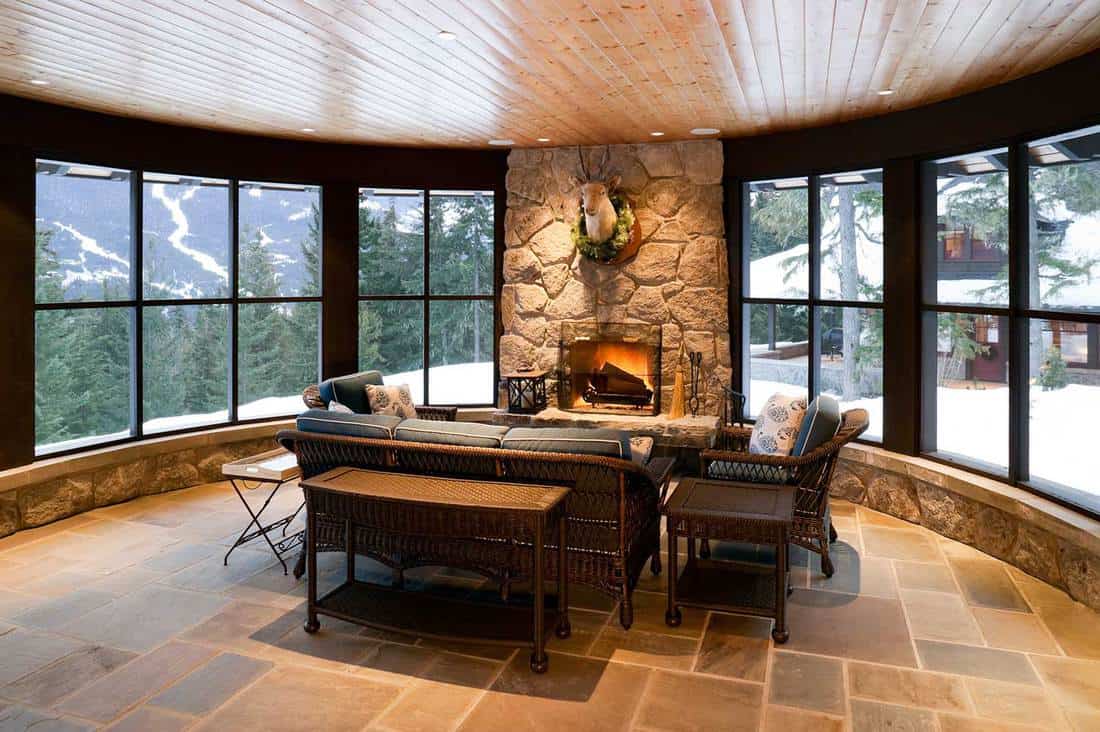 Clean angles and lines give your space a modern industrial feel that has recently become popular in home decor design. The dimensional look to the grid ceiling in the example below provides this space with depth and texture. Industrial-inspired lighting accents this metal grid and tile design for a bright glow strategically placed throughout the metal grid tiles. 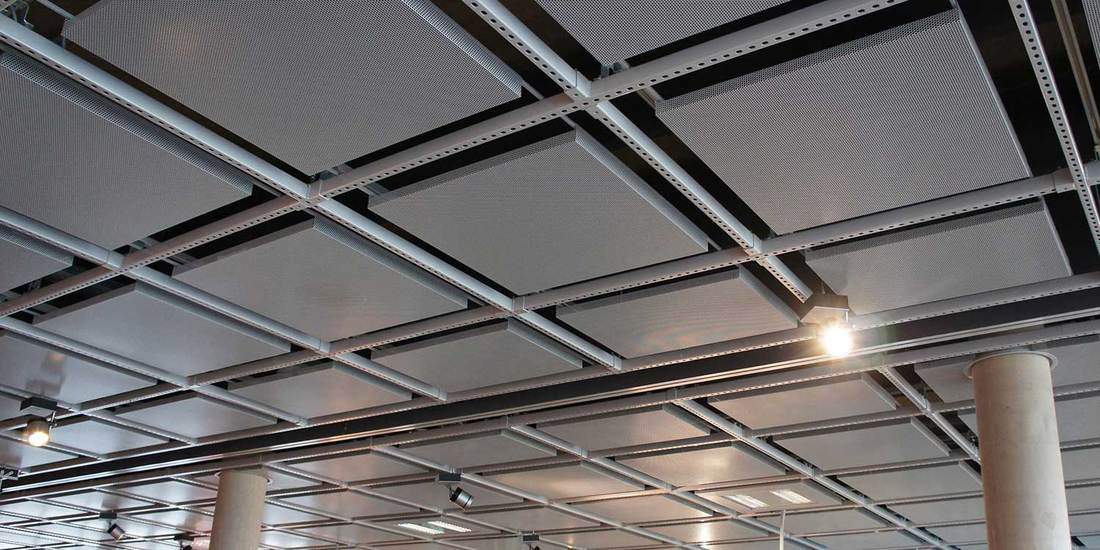 A partially dropped ceiling can add a unique architectural element to any space. By dropping the ceiling only in a specific area of your room, you can show division in your space without putting up walls. The partial dropped ceiling combines with track lighting for further decorative accents and the illusion of separation in the space. 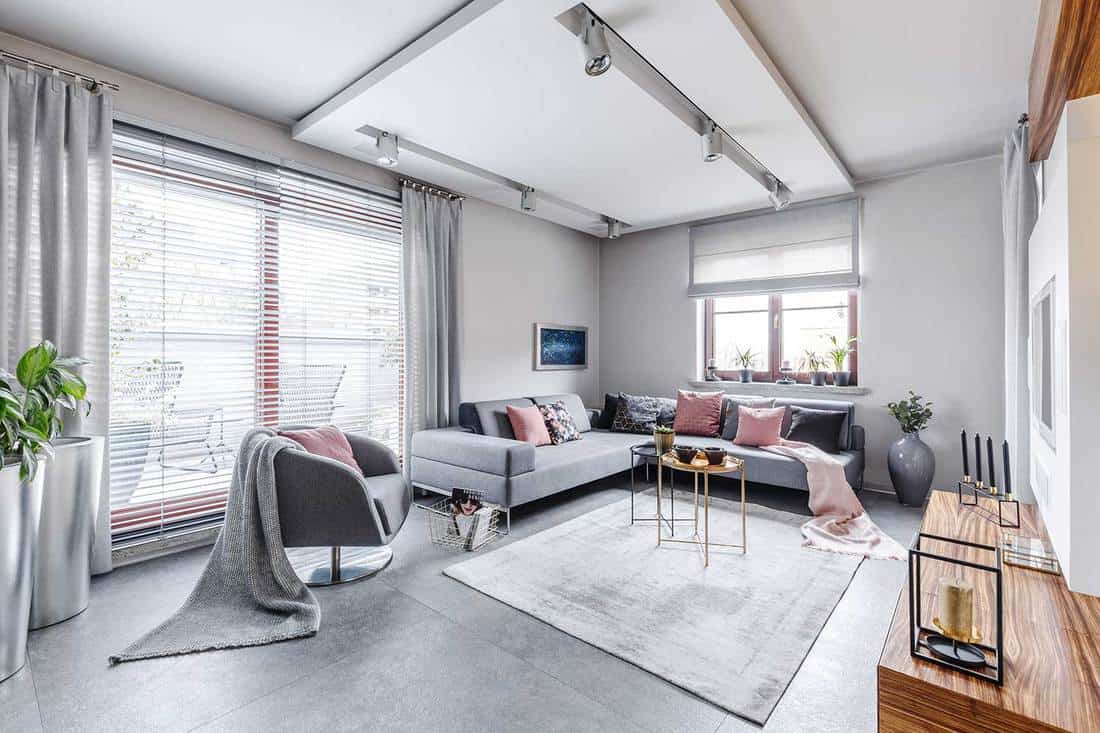 Recessed lights offer a sleek look to your ceiling by laying flush with the surface of your ceiling. Combining recessed lighting or can lights with a dropped ceiling may require a little extra effort to secure the cans in place above your dropped ceiling, but the clean, smooth look is worth every extra step. Place recessed lights purposefully throughout your room to illuminate specific spots in your home, as shown in the example below. 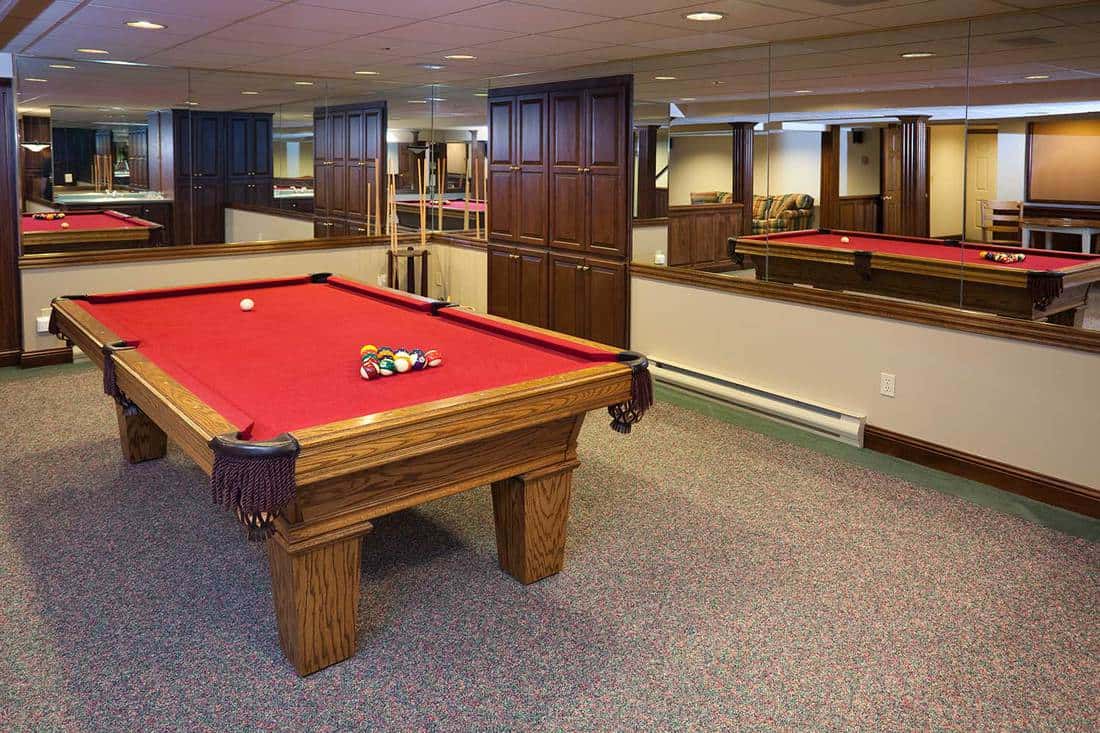 For an ultra-modern geometric look, the ceiling's circular cuts can be dropped and suspended for a unique cosmic ambiance. In the example below, the white circular portions of the dropped ceiling are illuminated using recessed lights for a bright accent to the dark walls. The black and white color palette adds a further dramatic contrast. 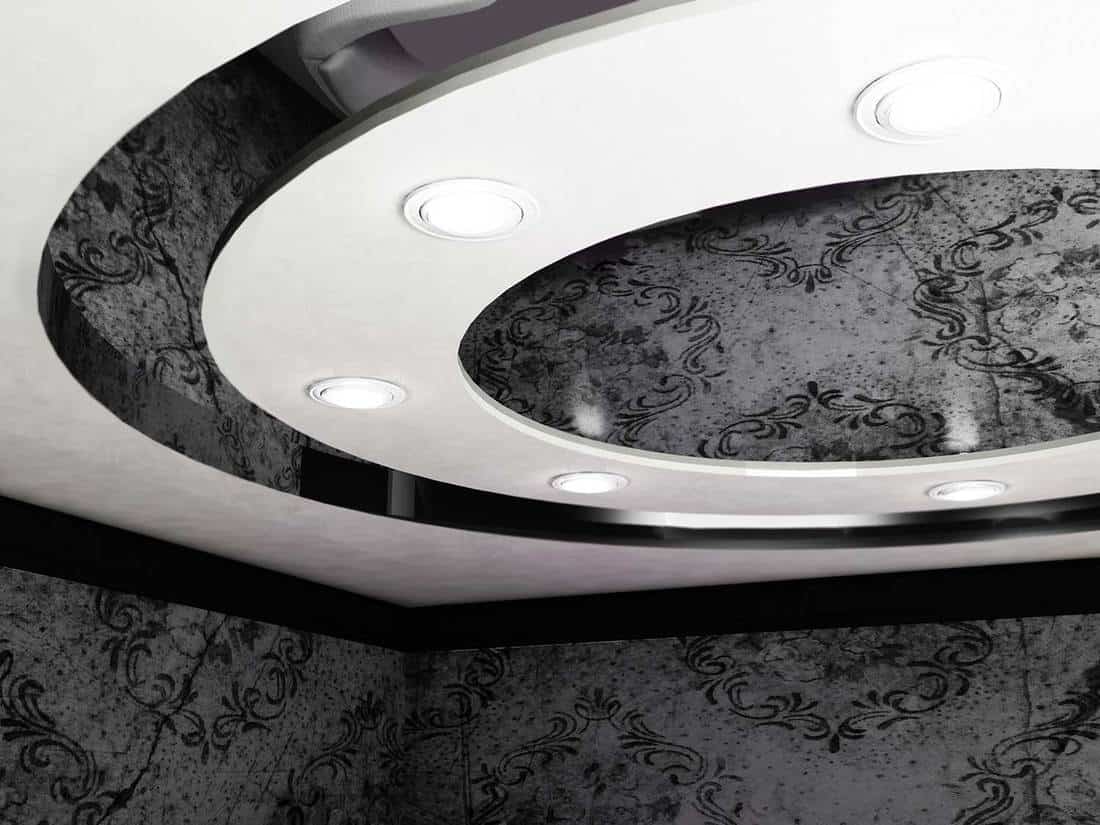 To create a cozy, toasty touch to the top of your room, naturally colored wood planks are a beautiful choice for covering your dropped ceiling. The warm natural brown wood planks on the ceiling in the example below coordinate perfectly. The brown tones in the brick walls and the shade of paint used on the adjacent room walls work together for a cohesive look. The recessed lights embedded in the wood-covered dropped ceiling give the wood a welcoming glow that brightens this entire kitchen. 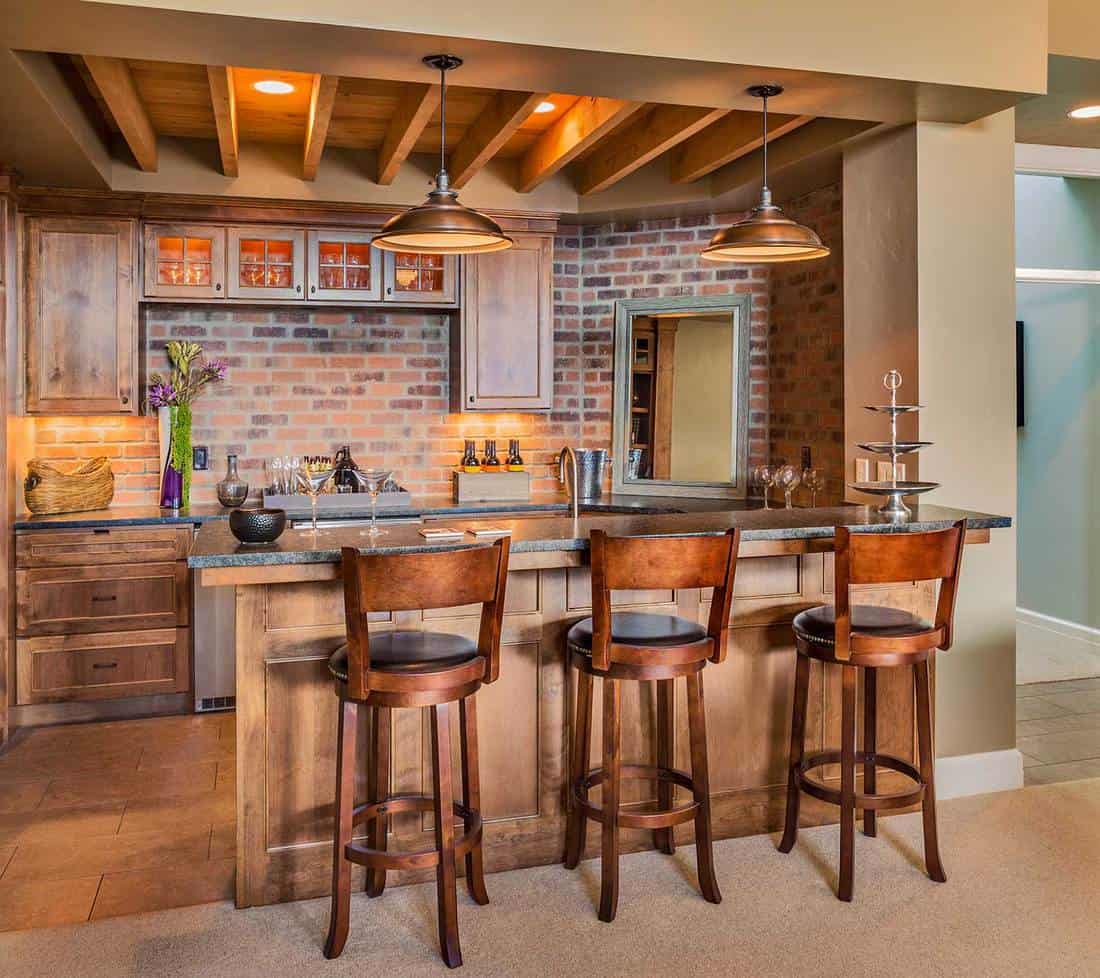 Dropping only the outer edge of your ceiling can draw attention to the center of your room or accentuate your room's lighting. The otherwise reasonably simple room in the example below is given an elegant architectural touch by dropping the ceiling's outer edge and highlights the chandelier lighting. 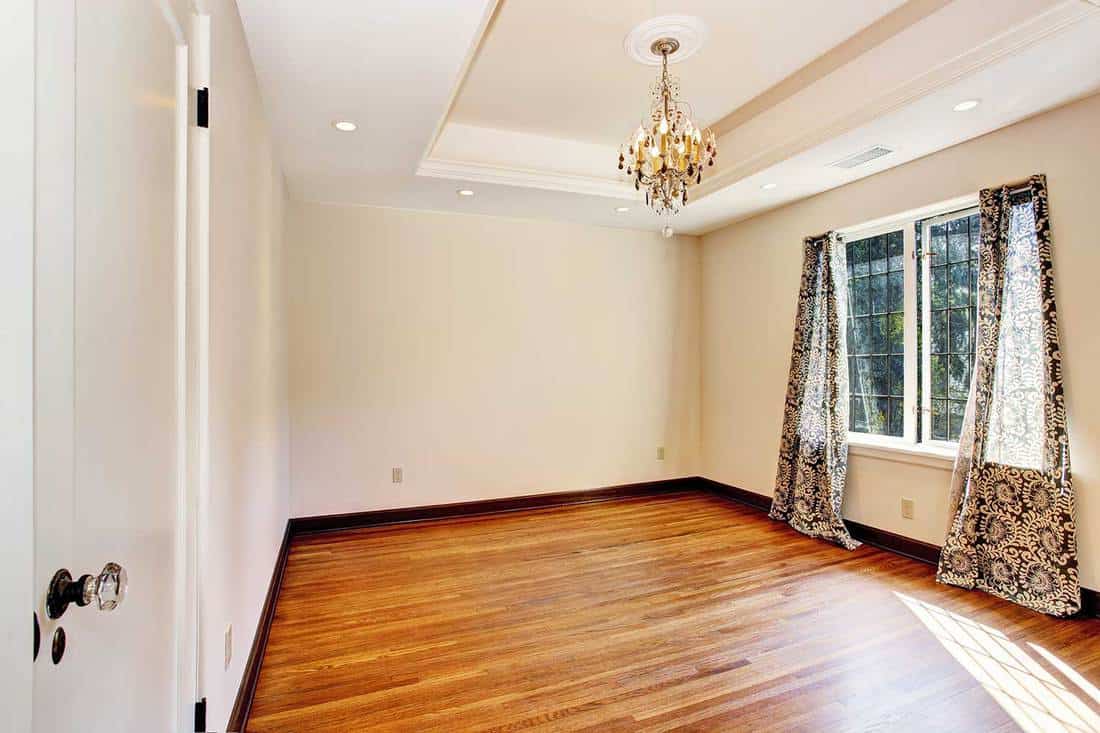 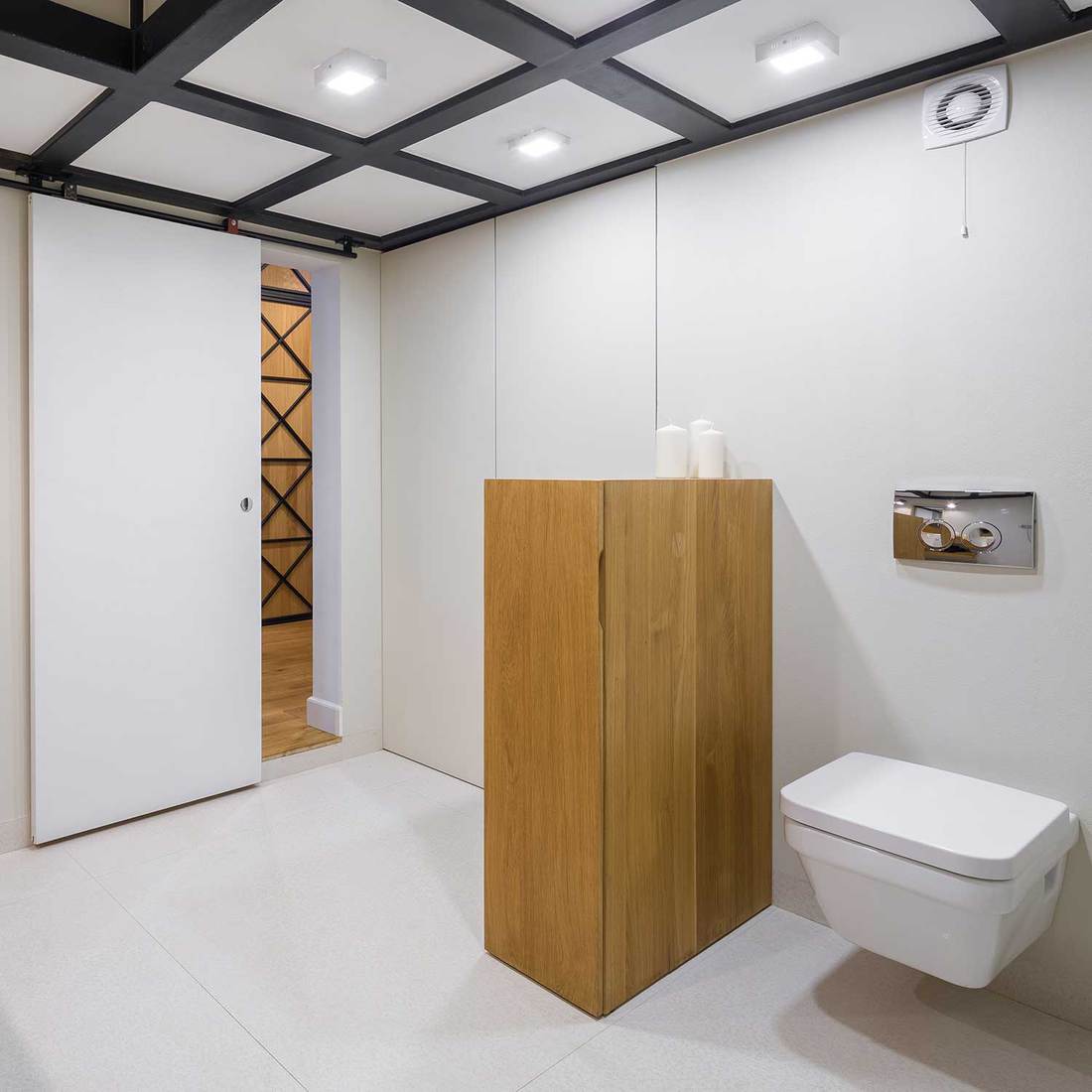 Seal tin ceiling tiles must to prevent rusting. For a lightweight alternative to traditional tin ceiling tile, consider using styrofoam ceiling tiles to add texture and character to your ceiling without the risk of rust and discoloration. The floral embossed example pictured below is a unique design that will add a simple, fun pattern to the top of your room. 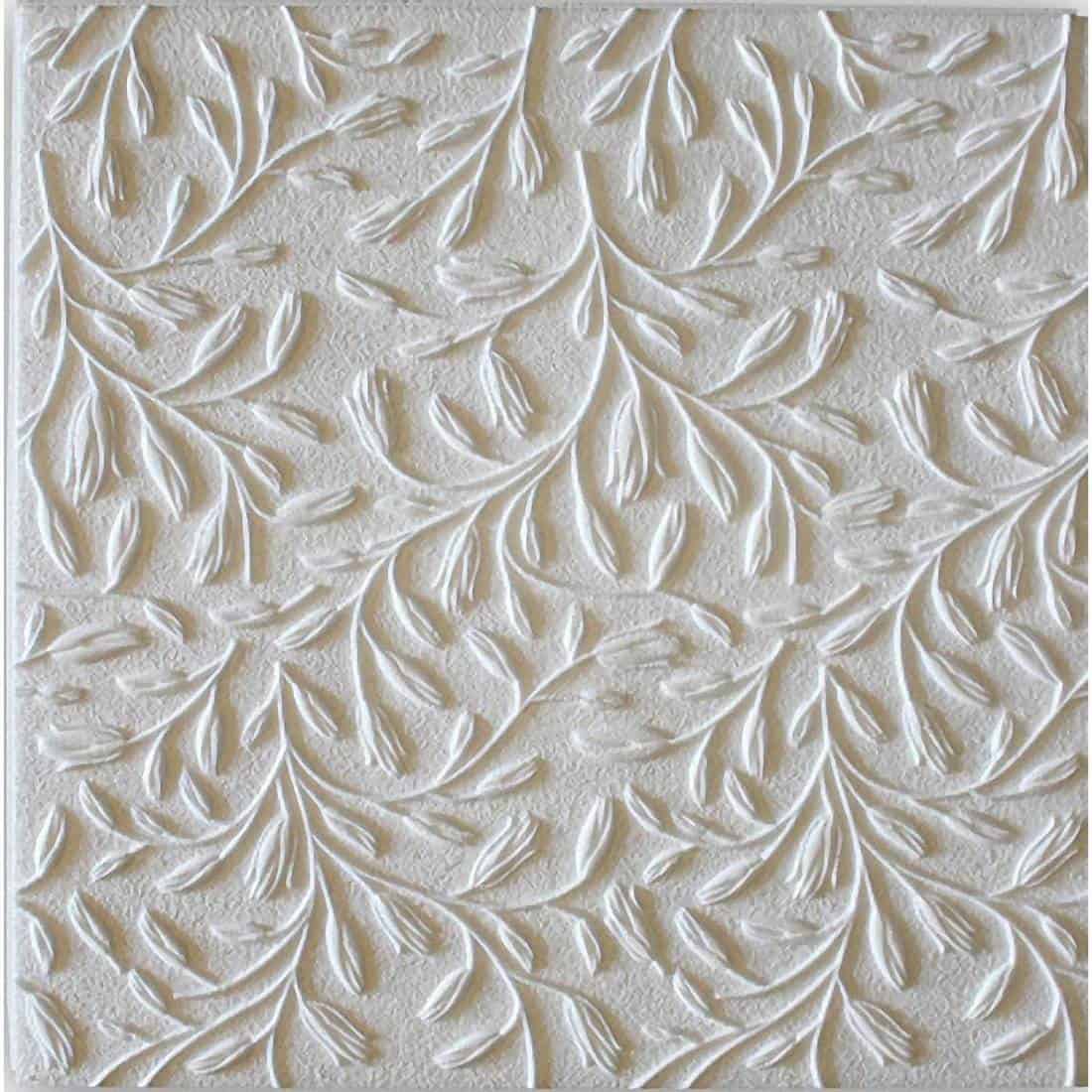 Rustic home decor has recently grown in popularity for its simple vintage style. The rustic wood planks used for the dropped ceiling's centerpiece give the kitchen a toasty grey and brown focal point. They pair beautifully with the white and grey surroundings.

Nothing says modern, quite like LED light accents in your space. The bright backdrop for the dropped edge ceiling in the example below adds a contemporary glow to the entire room and the room's brightening lights also highlight the lines of the ceiling's dropped edges. They add a dramatic effect and a vibrant contrast to the otherwise plain dropped ceiling. 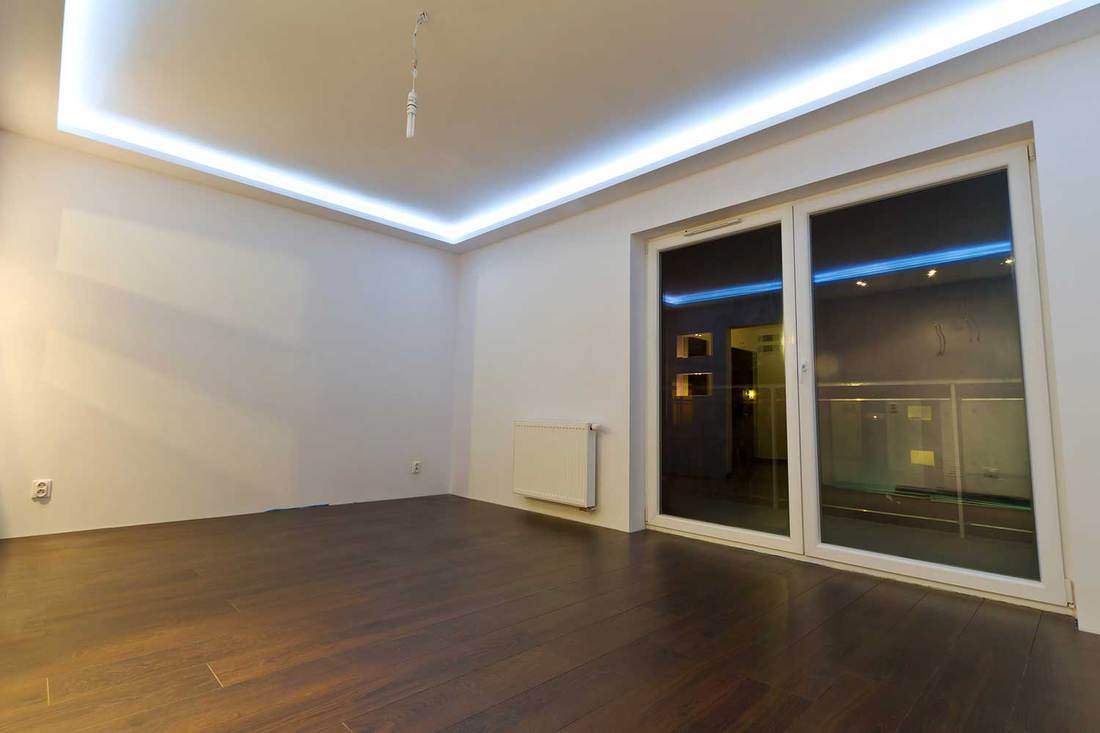 Sleek and classy, monochromatic colored ceilings can create a moody, elegant ambiance to your home. The black and white 3d tiles covering the dropped ceiling pictured below are the perfect accent to the cream room with black accents. The 3d geometric design adds a decorative flair to the ceiling.

Mysterious and dramatic black ceiling tiles can create a dark and moody ambiance in any space. The ultra-modern bedroom pictured below is accentuated with the black cut-out ceiling tile. Reserve the color black for a larger area, as the black ceiling can make your space seem smaller.

Whether you call them suspended, dropped, or drop ceilings, these false ceiling surfaces can be both functional and attractive. Dropped ceilings can cover unattractive objects through the use of a false or dropped ceiling but can also add a certain amount of decor to your room. Dropped ceilings can be covered with many different options in color and materials and give your room a whole new look. There are endless possibilities in dropped ceilings options! We hope to have inspired your inner decorator with the selection of drop ceiling ideas that we have provided.

Before you go, here are some other articles that may be of interest to you:

3 Types Of Suspended And Drop Ceilings