Many people install french doors in their homes to add more light and openness to a room or space. However, French doors can have an all too welcoming nature that can make those considering installing them think twice due to security concerns. In this post, we'll discuss French doors and certain safety measures surrounding them.

Compared to standard steel and solid wood-constructed doors, French doors are not the safest door option--especially when not installed with security features. This is because they are typically comprised of mostly glass panes, which can be easily broken. However, there are ways that you can add extra measures of security to your French doors. Here are a few of the most commonly used methods:

By adding additional security measures, you can improve the line of defense to make your French doors a perfectly secure home entrance. First, let's cover more reasons why French doors are less secure. 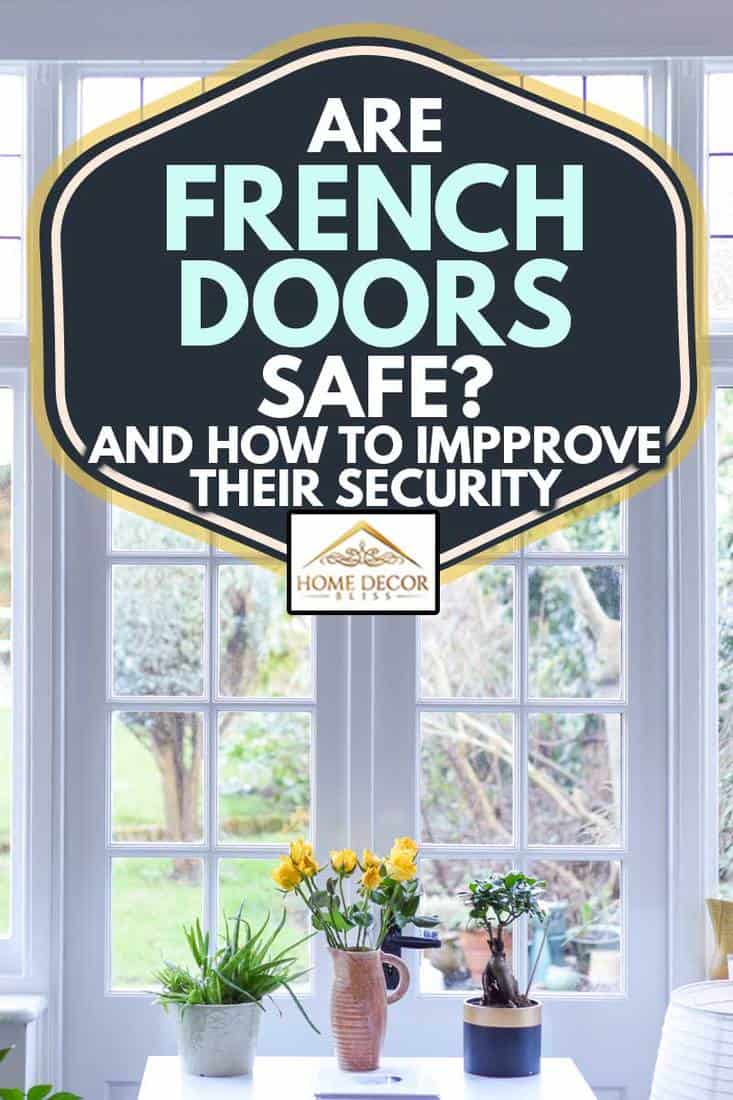 Many French doors tend to open outward, leaving the hinges exposed to the outside. This exposure leaves the door susceptible to entry as a thief can simply take the pins out of the hinges and then remove the door to enter the home.

The small, separated glass panels of French doors can easily be broken or cut, allowing a burglar to access the lock inside and open the door easily. The glass panels can also leave your home visibly accessible to prying eyes, which is why it's always best to have door length curtains to cover the doors at least overnight.

French doors consist of two doors instead of one; they can be easily kicked in as there is no joist or wood frame attached to the ceiling and floor to lock the entryway (as there is with a single door that has wood studs on both sides). The wooden frames on the doors themselves are typically rather thin, making it easier for someone to force their way through them. 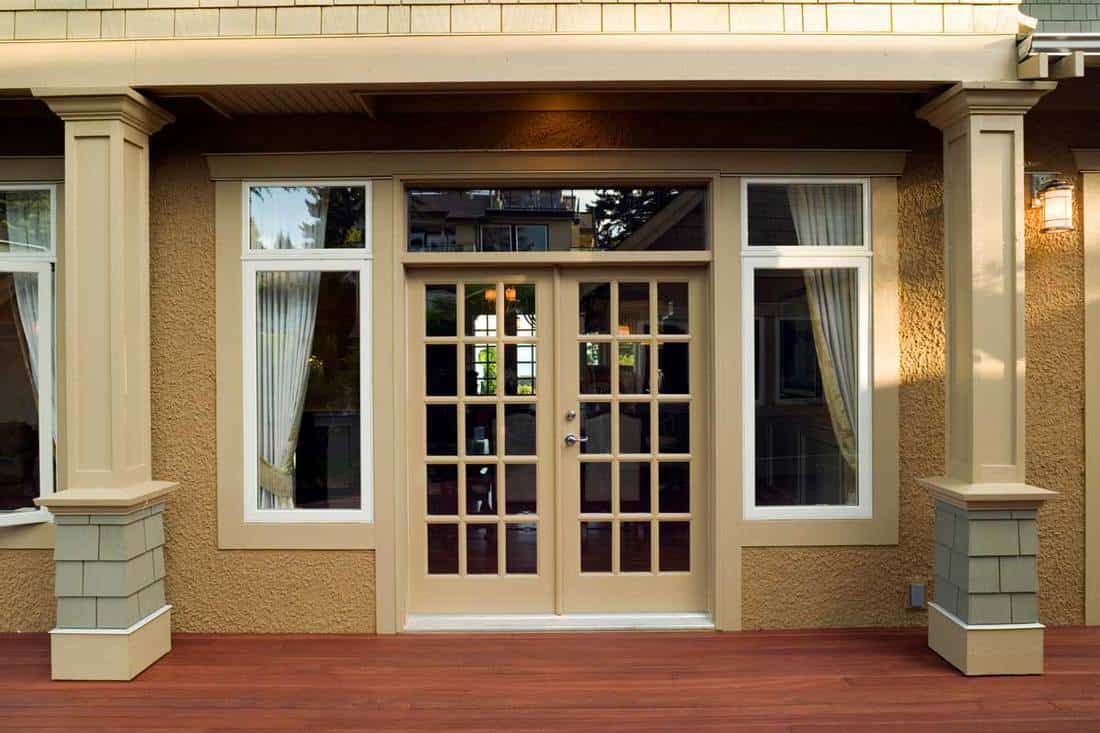 Now, let's discuss the ways we've previously mentioned that you can use to beef up your French doors' security.

To beef up the locks on your French doors, you can add a deadbolt lock that requires key entry on both sides of the door. An even better option is to add a double-cylinder deadbolt, which would require key entry on both sides. If going with the latter, be sure to note where the keys are kept to prevent locking yourself out! Double-cylinder deadbolts can make for an especially effective security defense, as a burglar would need to pick both sides of the lock to open the door, as opposed to just the outer deadbolt.

Check out this Kwikset deadbolt on Amazon.

A 3-point or multi-lock system consists of long metal rods that run the door frame's length and consists of three separate locks that's cure the door, making it more impenetrable than a single deadbolt.

Mortise locks are also worth considering. These locks are actually embedded within the door and are harder to pick. Mortise locks are strong, reliable, and have the appearance of traditional cylinder locks. Another great thing about them is that they are versatile and can be combined with other types of cylinders and security measures.

Indoor hinges can be helpful as they are inaccessible from the outside. This means that a burglar won't have access to remove the pins from their hinges to take the door off. There are three types of hinges that are typically recommended for French doors:

These types of hinges are usually designed for outward-facing hinges. The pins are secured in place with a latch so that burglars cannot tap them out, remove the door, and gain access to the home.

You can also buy studded hinges that allow a stud to be placed on either side of the hinge or the side of the doors. These hinges work by lining up both doors so that when they shut, the hinges cannot be ripped out with blunt force (due to the stud holding them in place) or tapped out with a tool.

Set screw hinges are also a great option as they make it fairly difficult for a burglar to penetrate the doors when they are closed. They come with a set screw that is used to hold the hand on the hand in place, and once the doors close, it can be accessed from the outside. However, you can quickly access it by simply opening the door and retracting the setscrew.

Homeowners can actually make this hinge on their own by simply drilling a hole in the middle of any hinge and then installing a small set screw. It's important to grind down the set screw as much as possible, as burglars can take it out if it is exposed.

Check out these Mortise hinges on Amazon.

It's always best that French doors do not open inward, but outward instead, with the hinges on the house's interior. This prevents them from being tampered with by potential burglars.

You can use door sensors to help secure your French doors. For example, vibration-sensitive alarm systems can detect any forced entry within seconds. Once detected, the sensors will go off, alerting you and the authorities. Alarm sensors can be installed on the pane of the doors or the top of the door frame.

Wedge alarms can also be installed on French doors and placed on the back of the door. These alarms will sound as soon as the door nudges even a few inches, triggering the alarm to sound. They can also easily be managed using a smartphone.

Check out this GE door sensor on Amazon.

Security bars are long narrow metal bars that can go either above or below the door handles. Similar to the liftgate on a highway toll stop, these lay horizontally across the door and can only be lifted (or slid to the side) from the interior of the home.

One of the most common types of security bars is known as a flood bar, which sits diagonally against the door and uses the floor's surface as leverage to prevent entry. It's important to install flood bars correctly, as they can easily collapse if they are not lined up perfectly with the floor.

Check out this security bar on Amazon.

Security screens are unobtrusive and simple safety options for French doors. They are fairly easy to install, and they're also one of the less costly security options--if you're on a budget. While they may not be as effective as other security measures, they can definitely offer elements of privacy and a minimal measure of defense. However, this isn't necessarily bad as they can deter thieves who prefer homes that are easier to access--this adds another layer to get through. The grills are also pretty easy to install and can be set up in a couple of hours.

Security grills are another option and are more effective than screens. These retractable grills are made of metal and are installed on the outside of the doors, requiring a key to unlock them and gain entry to the home. Security grills are rather unobtrusive when retracted but are clearly visible up-close when they are extended.

Important to note, blackout curtains can also be a great way to ensure your privacy at night.

Check out these french door blackout curtains on Amazon.

Laminated or hurricane-rated glass can also be used to keep French doors more secure. Hurricane-rated glass is made to withstand heavy impact and stays intact even while under pounds of pressure. This type of glass has been shown to even withstand blows from sledgehammers without breaking. So to say, it's worth looking into as a suitable security option for your French doors.

What type of glass is used for French doors? 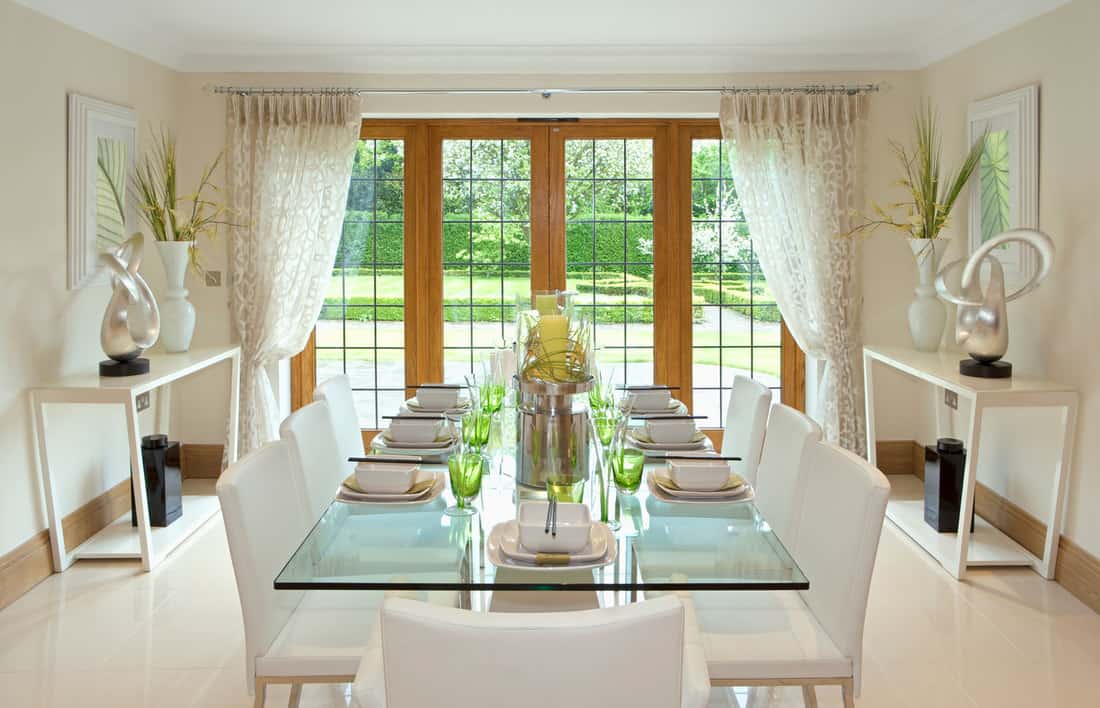 For the most part, French doors are safer than sliding doors. There are a few reasons for this, primarily:

Sliding doors can easily be pried off of their tracks or forced open using everyday tools. And this is actually the most common method of entry in home burglaries (in addition to window break-ins). French doors typically have a steel rod at the top and a latching deadbolt, making them harder to kick in (and impossible to kick in if they swing out). They can also be comprised of multi-point locking systems, something that isn't available for sliding doors.

Sliding doors use latches instead of locks, a fairly weak locking mechanism that can easily be pried open by burglars. French doors can have deadbolts installed on multiple areas of the doors to make them more secure.

French doors are typically made with laminated or tempered fiberglass. The glass used to make sliding or patio doors tends to be thinner in most cases.

Which is better; inswing vs. outswing French doors?

For the most part, inswing doors will provide more security and safety than French doors that swing outwardly. Not only do they allow the hinges, deadbolts, and other security features to be inaccessible from the outside, but they offer quick access, so then you can lock them at night.

They also allow more control over the amount of airflow that enters the home. Their inward swinging ability means that you don't have to worry about being hit in the face with a huge gust of wind when you open the doors. But instead, you can open them, even just slightly, to allow a nice fresh breeze into the home.

Do French doors add value to your home?

It's a known fact that curb appeal and added security can make a home more attractive to buyers. French doors can definitely raise the value of your home if you are looking to sell it. Many homeowners love the benefits of French doors, including their ability to let in enormous amounts of sunlight while still keeping cold air out.

Are French doors and double doors the same?

Double doors and French doors are not the same, though the terms tend to be used interchangeably. The term "French doors" will always represent a set of doors comprised mostly of separated glass panes. However, the term double doors can refer to any set of conjoined doors, whether they're made of glass or any other type of material. And in the real estate world, it's often a term more used to describe doors in residential properties and commercial buildings, as these are popular entrances for areas such as game rooms and swimming pools. 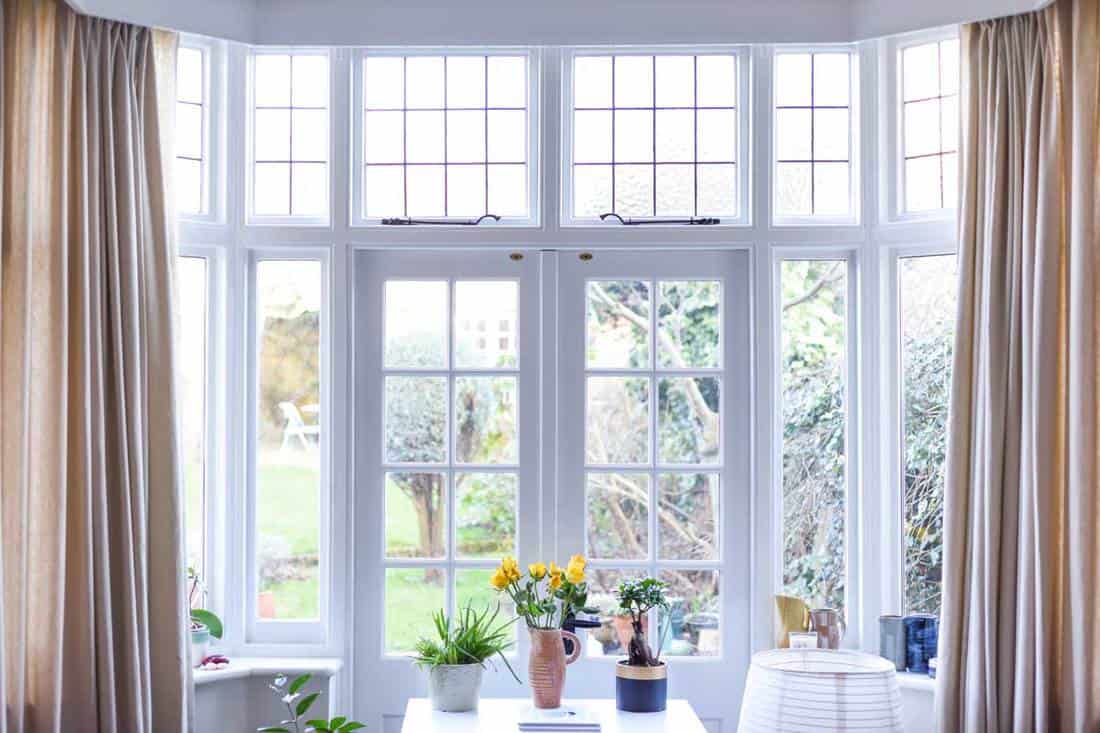 In short, french doors are not ideally the most secure door option available. However, there are ways to increase your French doors' security, including adding security bars, alarms, impact-resistant glass, amongst other options.

Interested in learning more about home doors? Check out our other posts:

How To Stop French Doors From Blowing In The Wind?

Should All Exterior Doors Be the Same Color?