If you've never hung a shower curtain before, it can be intimidating to know how high to hang it. Hanging it too low will let the curtain drag on the ground, collecting germs and dirt. Too high, on the other hand, and the curtain will look too short. We've found the ideal height for a shower curtain to help you get the right fit.

You should hang the shower curtain rod three to five inches higher than the length of the curtain. Since most shower curtains are 72 inches long, this means that you should hang the rod 75 to 77 inches high, depending on the size of the rings or hooks. This is high enough to keep the curtain's tail off the floor but low enough to allow it to do its job.

The good news is that you have plenty of flexibility on how high to hang your curtain. But if you want to be sure you're doing it the right way, don't worry because we've done the research and can help your curtain look great! For more details on shower curtain heights, plus a step-by-step guide on how to do it, please keep reading. 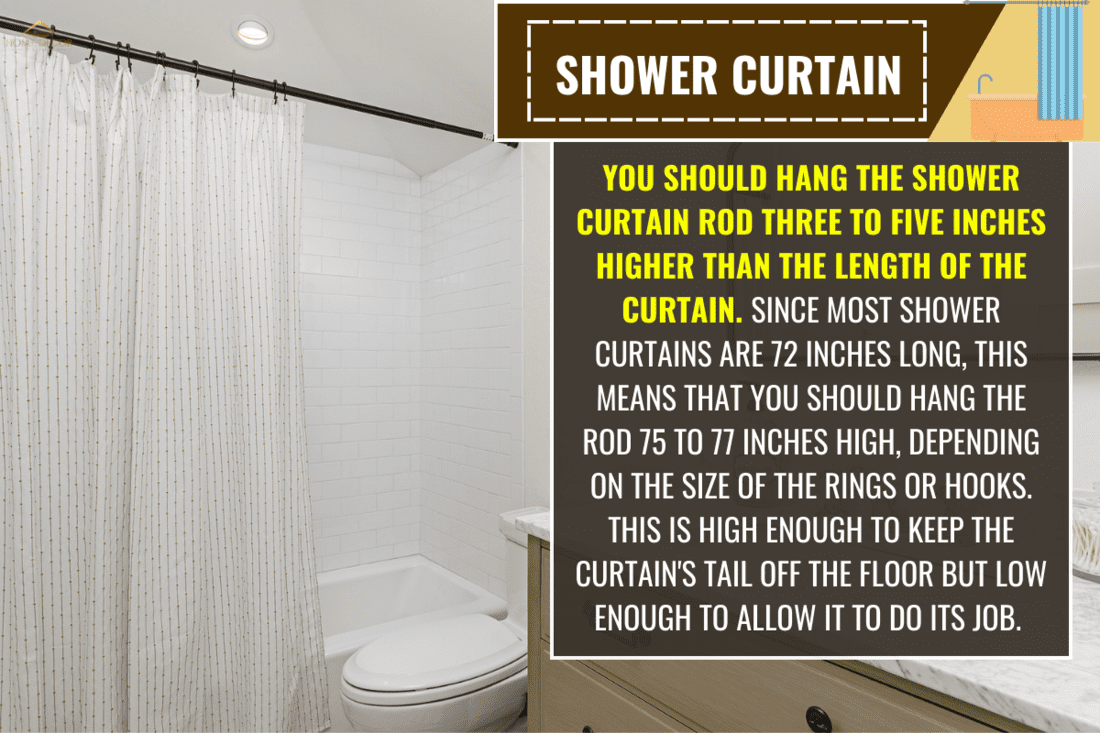 How high do you hang a shower curtain?

The height of your shower curtain is flexible and depends on your preferences. However, there are some tips you should follow to make sure you're getting the most out of your curtain. The rule of thumb is to put the shower curtain rod three to five inches higher than the shower curtain's length. At the least, you want the curtain to hang at least six inches past the rim of the tub. 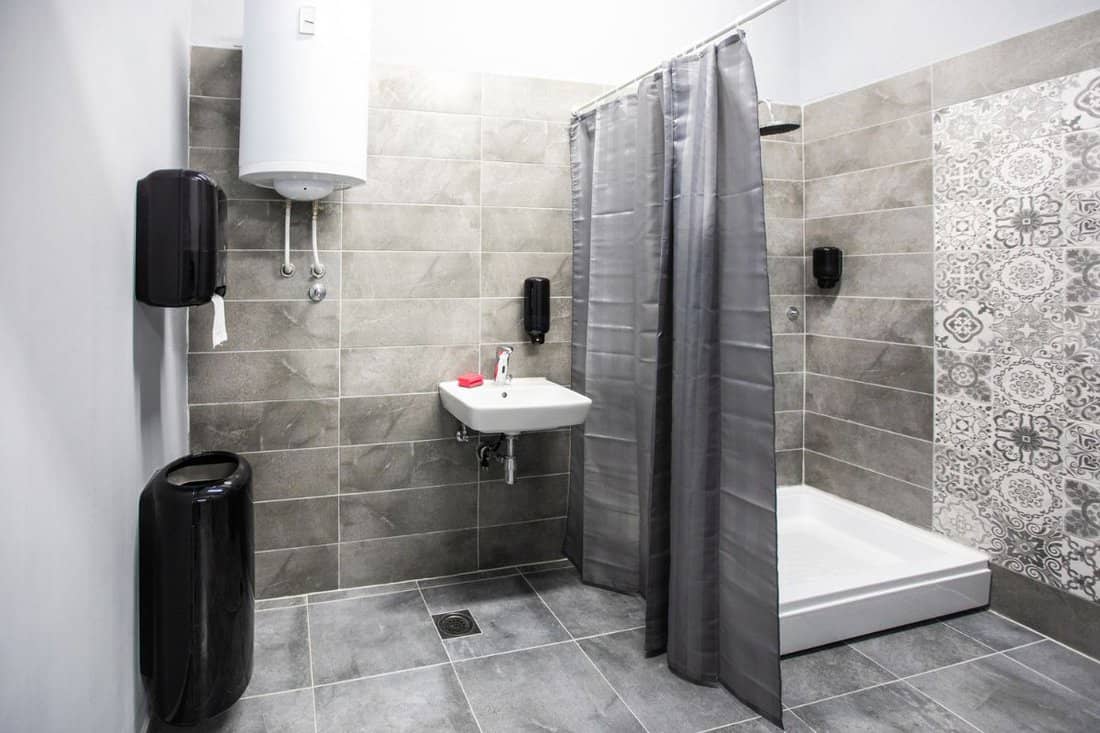 Hanging the rod higher has the effect of making the bathroom ceiling appear taller. This is important if you want to create the impression that the bathroom is larger than it actually is. You can also find extra long shower curtains. This lets you hang the curtain higher than normal while still letting the tail hang low enough. This curtain is 84 inches long, a full foot longer than a normal shower curtain.

Click here to purchase this shower curtain on Amazon.

Should A Shower Curtain Ever Hit The Floor?

A shower pan is designed only for showering, not for filling a tub. The shower pan will typically only have a lip a couple of inches high. This makes hanging a shower curtain different than in a bathtub. If you have a shower pan instead of a bathtub, you'll want the edge of the curtain to drop below the lip of the pan by at least an inch. There is not as much flexibility since you have less room to work with on the lip.

What Is The Proper Way To Hang A Shower Curtain? 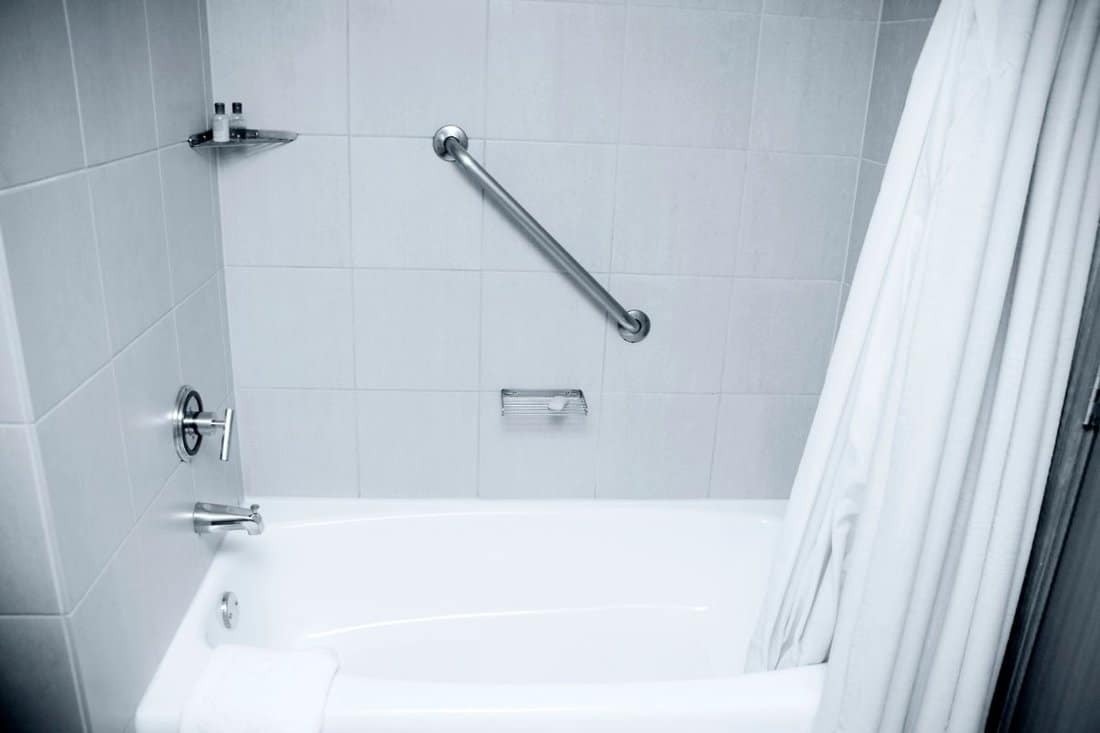 Then, decide how far off the ground you'd like the tail of the curtain to be. Remember that the curtain should ideally drop below six inches of the tub's lip to prevent water from dripping. Add this amount to the length of the curtain and hooks.

When you are satisfied with the calculated height, measure and make a small mark at the same height on both shower walls. Don't worry if it's not perfect or you'd like to change it later because most shower curtain rods are not permanent and can be adjusted easily. Use a marker or pencil, which will wipe away if you've made a mistake. 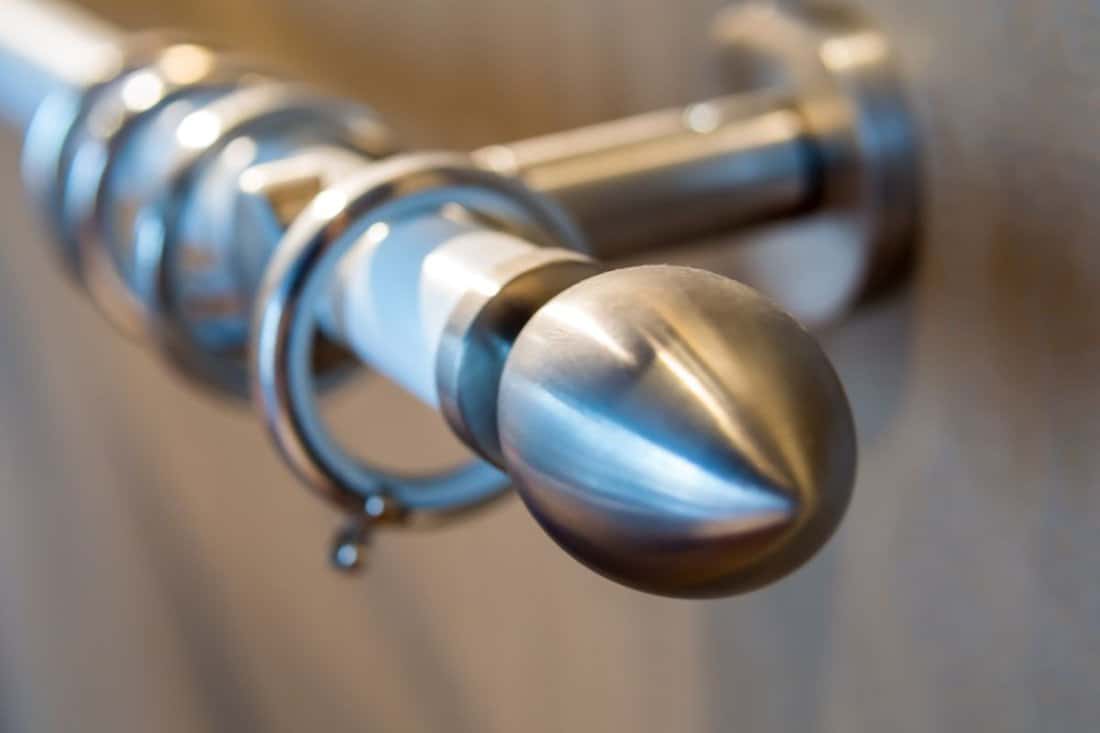 Many curtain rods are what we call tension rods. This means that the only thing holding the rod in place is tension against the two walls. Each end of the rod usually has silicone or rubber tips so that they can grip the wall. Tension rods telescope into themselves, so you can make them longer or shorter by unscrewing them.

Click here to see this tension rod on Amazon.

To put up a tension rod, unscrew it to almost the complete length between the walls. Once you have the rod unscrewed, almost as long as you'll want it, put it on top of the marks you made earlier. Unscrew it the rest of the way until it is wedged between the two walls.

If you're not using a tension rod and instead have a screw mounted rod, follow the directions on the packaging. Apply the brackets at the location of the marks you made earlier.

3. Put on the hooks or rings

Most shower curtain hooks require you to use force to open the gap so that they can fit around the rod. Others, like the ones below, have an interlocking mechanism to hold them in place. Others are simply hooks that rest on the top of the rod.

If you're using a curtain that doesn't need hooks (like the one shown below), this step will look slightly different. Instead of hanging the rings, slide the curtain directly onto the rod.

Click here to purchase this shower curtain on Amazon.

4. Hang the curtain and liner

Using the same method as when you put the rings on the rod, open them up enough to get the shower curtain and liner into the ring. Do the liner first and make sure it is on the tub-side of the hook. Then hang the curtain, making sure it's on the outside.

For a clean look, make sure all the hooks' openings are uniformly facing into the shower.  Spread the curtain out to make sure it looks the way you'd like and that it moves correctly. Put the curtain's tail outside the tub and make sure it hangs at a height you like, and do the same with the liner on the inside of the tub.

Sick of your shower curtain liner sticking to your legs? Check out "Why Does My Shower Curtain Attack Me [And How To Prevent That]!"

How Long Should A Shower Liner Be? 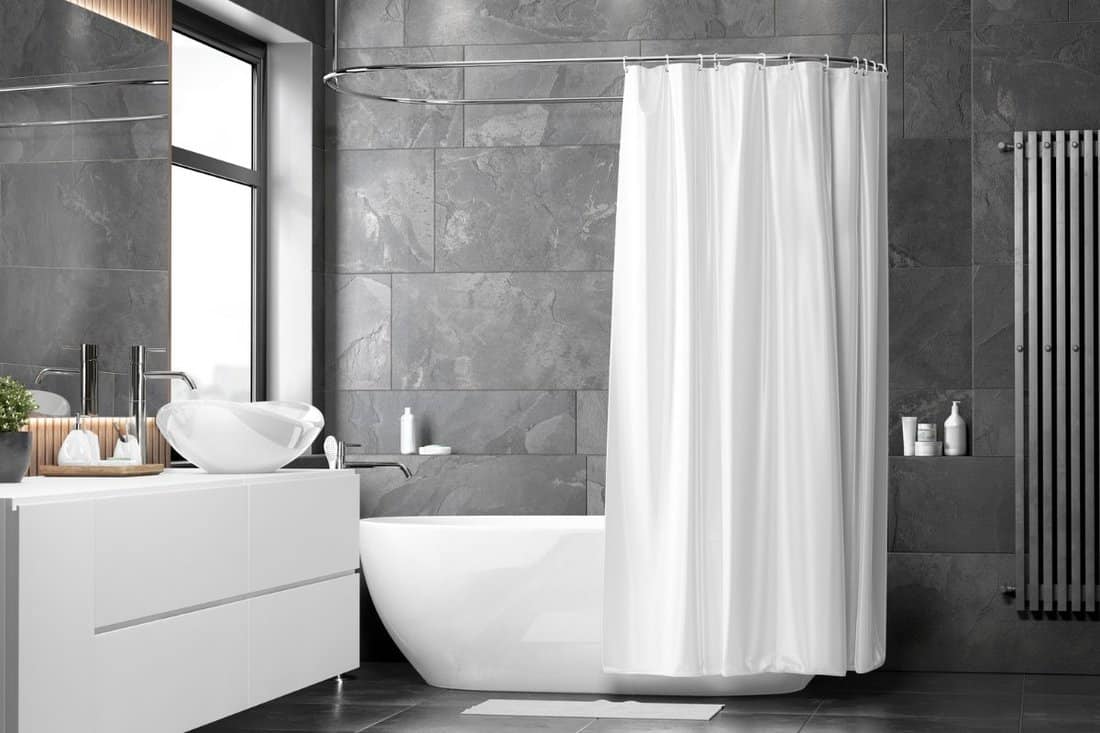 A shower curtain liner's goal is twofold: to protect the shower curtain from water damage and keep water in the shower, not the bathroom floor. A liner's tail should hang inside the tub wall, while the curtain should hang outside of it. Thus, when the water hits the liner, it runs back into the tub instead of outside the shower.

For a detailed list of the best mold and mildew-resistant liners, check out "5 Best Shower Curtain Liners To Avoid Mildew And Mold!"

You have a lot of flexibility when hanging a shower curtain. However, if you'd like a tried-and-true way to make sure that it looks good, hang it three to five inches higher than the length of the curtain. For more specificity, add the curtain's length, the drop of the hooks, and how far off the ground you'd like the curtain's tail to be. The curtain's goal is to hang low enough that no water can escape and so that the tail covers at least half of the tub's lip. 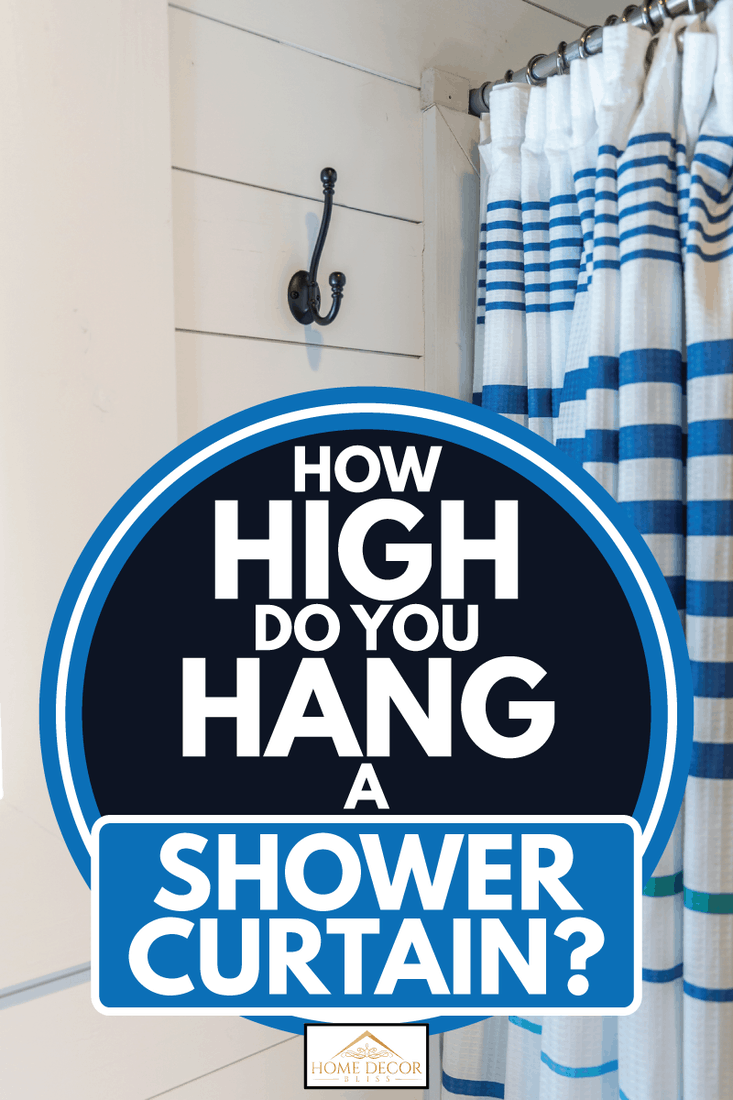