A drop ceiling can be a very effective way to improve the look of a room. This ceiling type is a cost-effective choice and a good option to hide exposed plumbing and wiring. If you’re considering installing a drop ceiling, you may wonder how low it should be. Below is what we found in our research.

Manufacturers of drop ceilings typically recommend between as few as 3” and 8” at most of space above a drop ceiling. This could be a factor in how high above a floor your drop ceiling should be. Typically a drop ceiling must meet building codes for minimum ceiling height, which is 7' in many locations. Many people install this type of ceiling in basement rooms and recommend at least 7’5'' as the lowest height.

We discuss finished drop ceiling heights and how far beneath plumbing, floor joists, and other obstructions to install the ceiling in detail below. Please keep reading! 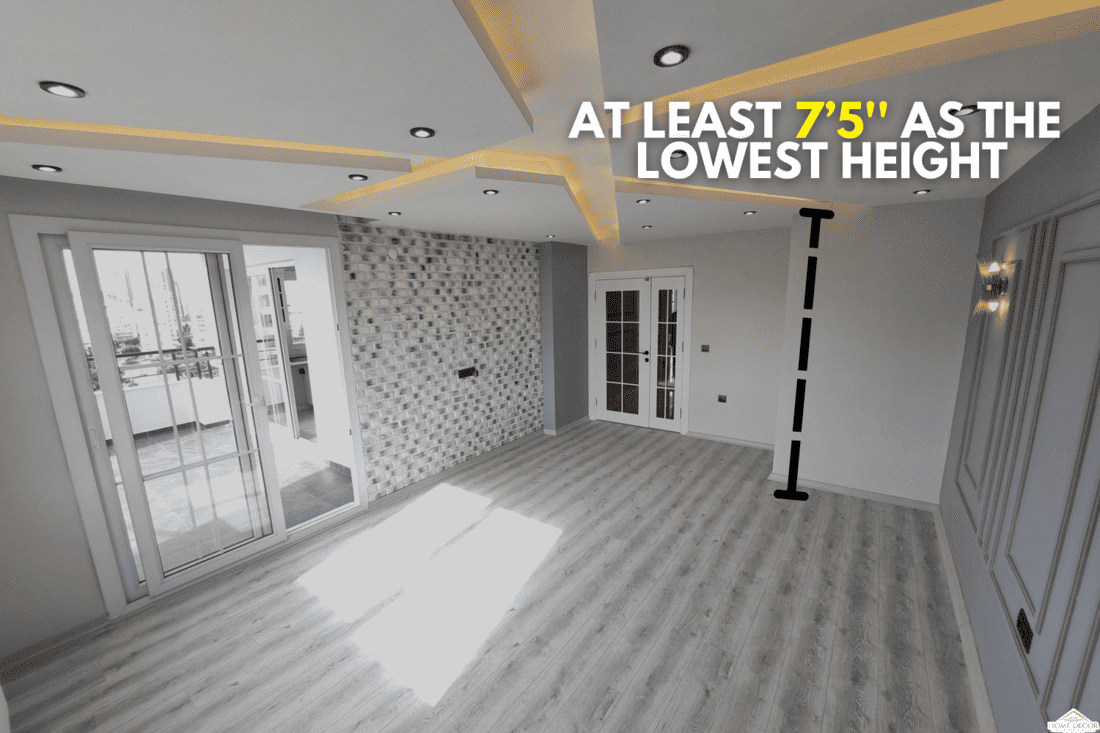 How Much Room Do You Need For A Drop Ceiling?

Drop ceilings are a common do-it-yourself project that people take on to improve the look of their home. A drop ceiling can hide plumbing, heating ducts, and electrical wiring while still allowing easy access as needed. They are often simple to install, and there are various panel styles and sizes to choose from, making them popular for room upgrades. But these ceilings do need a certain amount of space above them for proper installation.

How Much Space Should Be Above A Drop Ceiling? 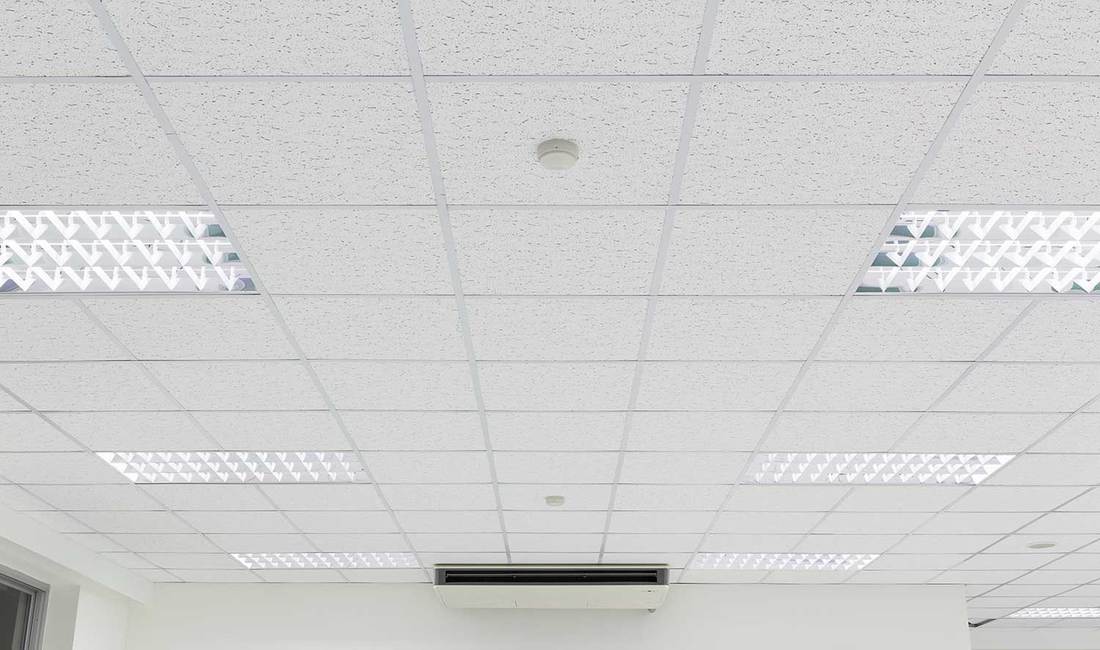 Most manufacturers recommend around three-inches of space above their drop ceilings, with some recommending as much as eight-inches. That three-inch recommendation typically applies to space between any obstruction, some of which include:

This is just a recommendation, and in some cases, people install a ceiling with just a half-inch or one-inch above it. Though, it may be more difficult to install the tiles with such limited spacing. To install tiles, you must lift them through the grid's opening at an angle, then slide them down into their proper place in the grid --less than three-inches clearance can make this process difficult.

When installing closer than three-inches, you may not be able to remove the tiles to work on plumbing or electrical above the ceiling without taking down the entire track that holds the ceiling grid up. It will also be much more difficult to install if you use such low clearances, and it will take longer.

Most people consider it best practice to allow at least the recommended three-inches below any plumbing or electrical wiring. This gives you room to access everything, and it leaves room to install or remove the tiles without any trouble with interference from the structure or obstructions above.

You can sometimes get by with less space under a pipe or wiring, as long as the majority of the drop ceiling has three-inches or more space. This is because you can insert a ceiling tile into an adjacent opening, then slide it over the grid and under the pipe or wiring. In such cases, one-inch or less may be possible, but still not usually recommended.

How Far Above The Floor Should A Drop Ceiling Be? 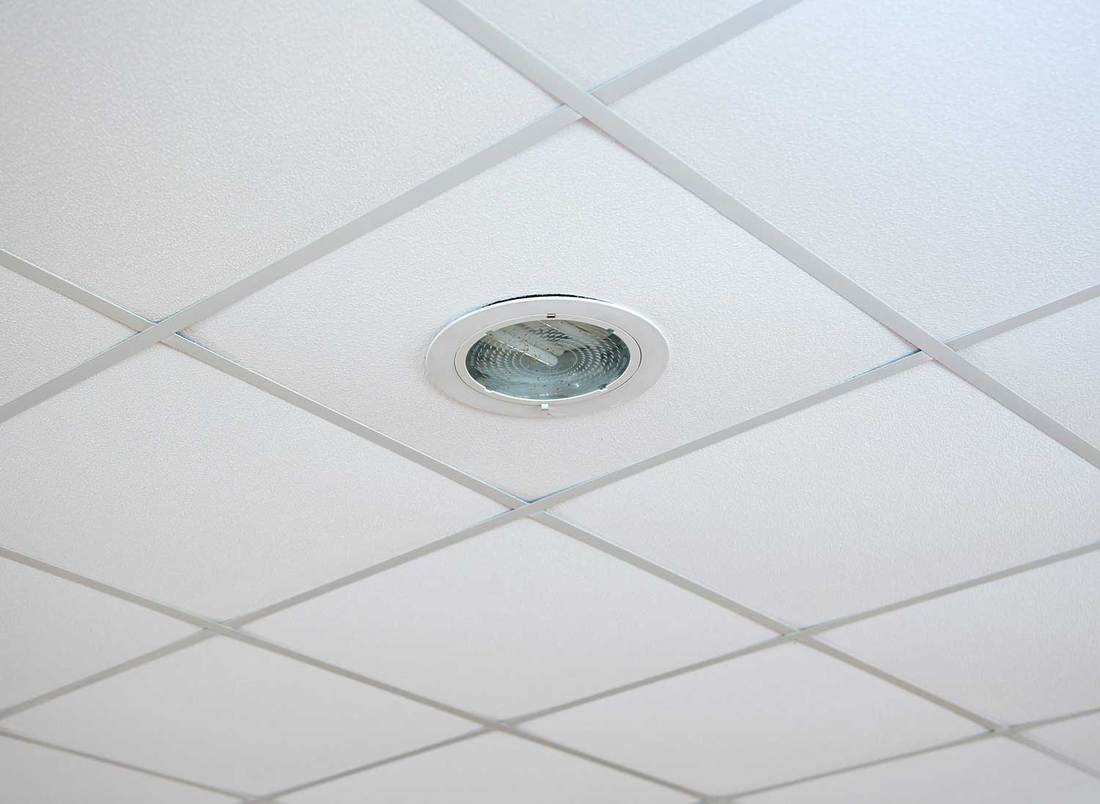 Many building codes do not have specific rules for drop ceiling heights. Building codes treat them like other ceilings as far as height, so typical ceiling codes will apply. Most United States' locations base their building code on the International Residential Code, stating that a ceiling must be at least seven-feet high over at least half of the room. Some local codes may differ from this, but if not, your drop ceiling should be at least seven-feet or higher.

Many people recommend placing your drop ceiling higher than the required minimum, suggesting seven-feet, five-inches, or seven-feet, six-inches as the lowest height. Whatever height you set your ceiling, keep in mind that lower tends to make the room feel more enclosed --especially in smaller rooms. Also, keep in mind the room's use. A low ceiling in a laundry room isn’t as much of a problem as a low ceiling in a family room. 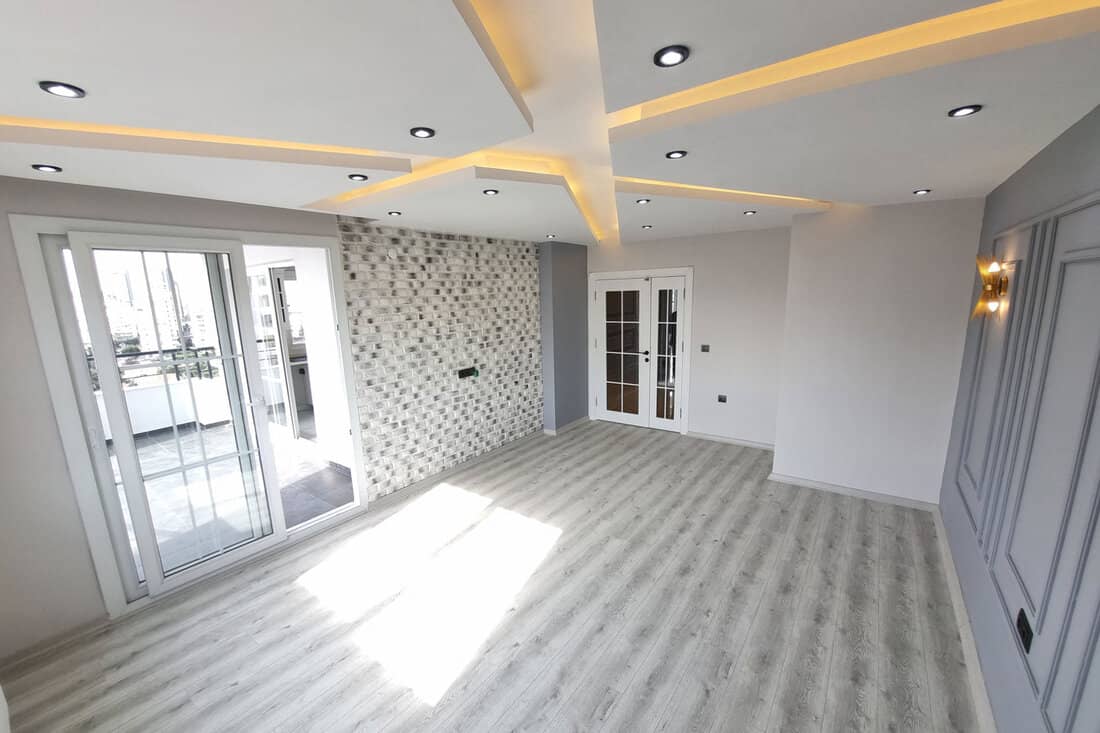 There are a few other considerations when installing your drop ceiling: boxing obstructions and support and spacing for lighting fixtures.

If you have an obstruction, such as plumbing or heating ducts, you can box around it. This leaves the majority of the ceiling higher while dropping it down underneath your obstruction. Doing this would help you maintain a decent ceiling height in an area where there are low-hanging pipes or ducts. You can see an example of this in the video below. 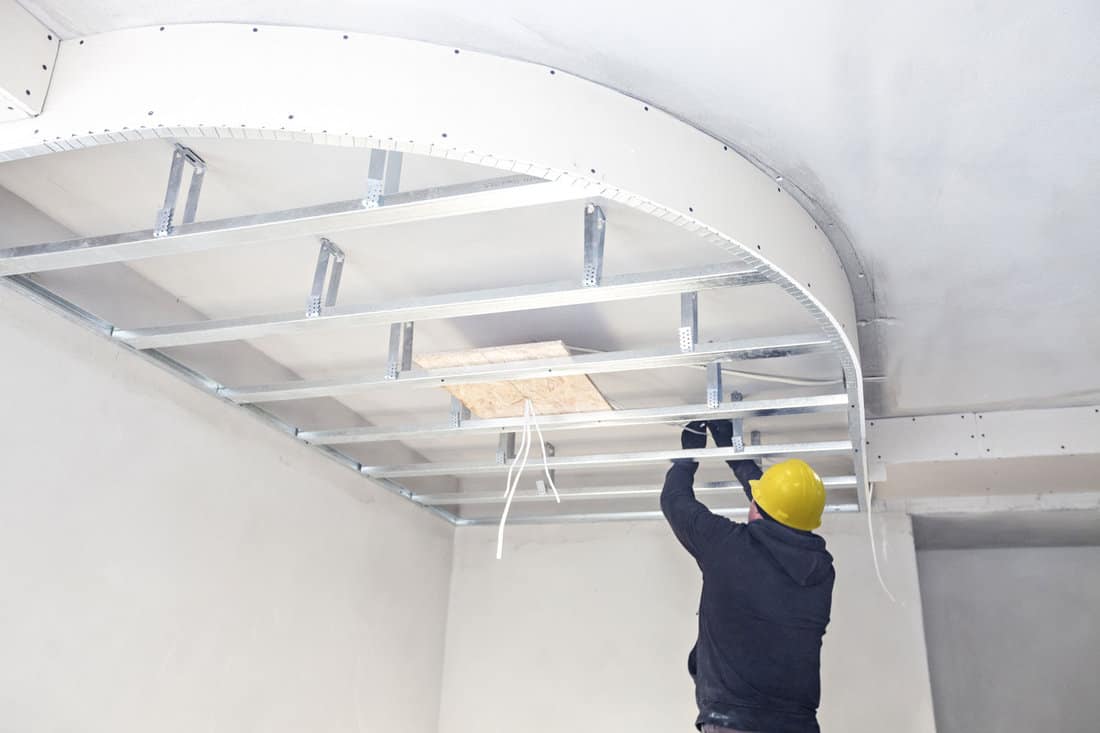 For an example of how to install a drop ceiling, check out this video:

What's The Difference Between A Drop Ceiling And A Suspended Ceiling? 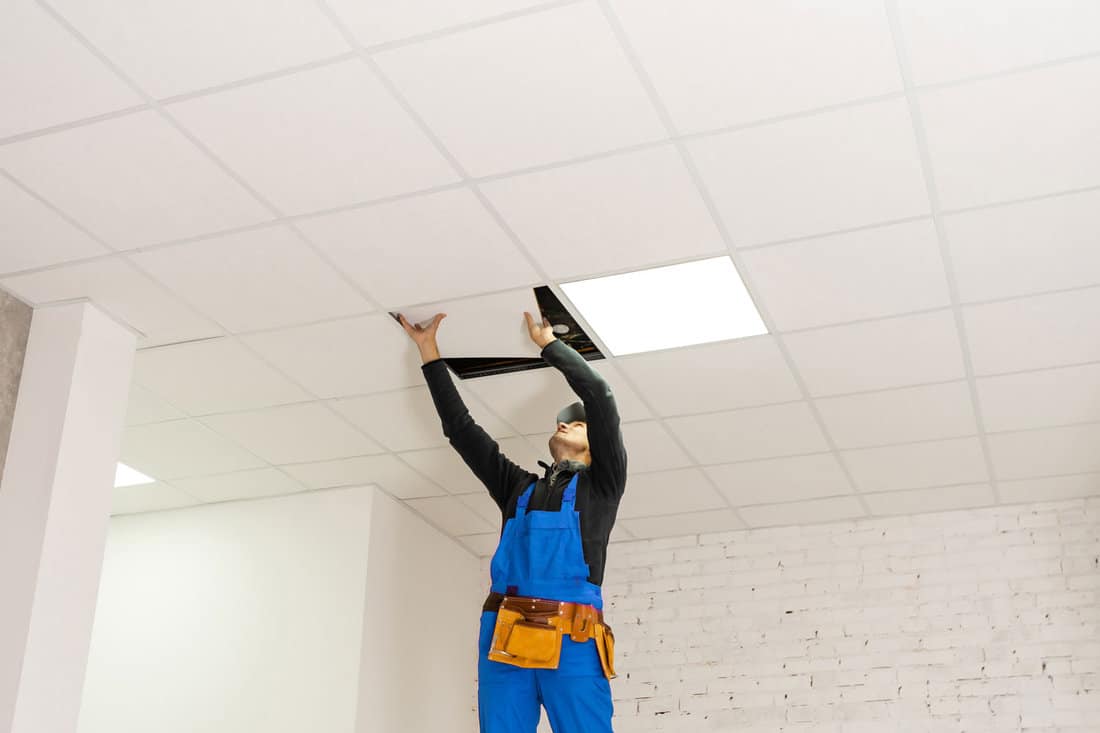 A drop ceiling is the same thing as a suspended ceiling. People may refer to this kind of ceiling by any of the following:

These are all referring to the same type of ceiling. All are basically just grids that hang below the permanent structure and allow for placement of drop-in ceiling tiles.

Can You Hang Things From A Drop Ceiling? 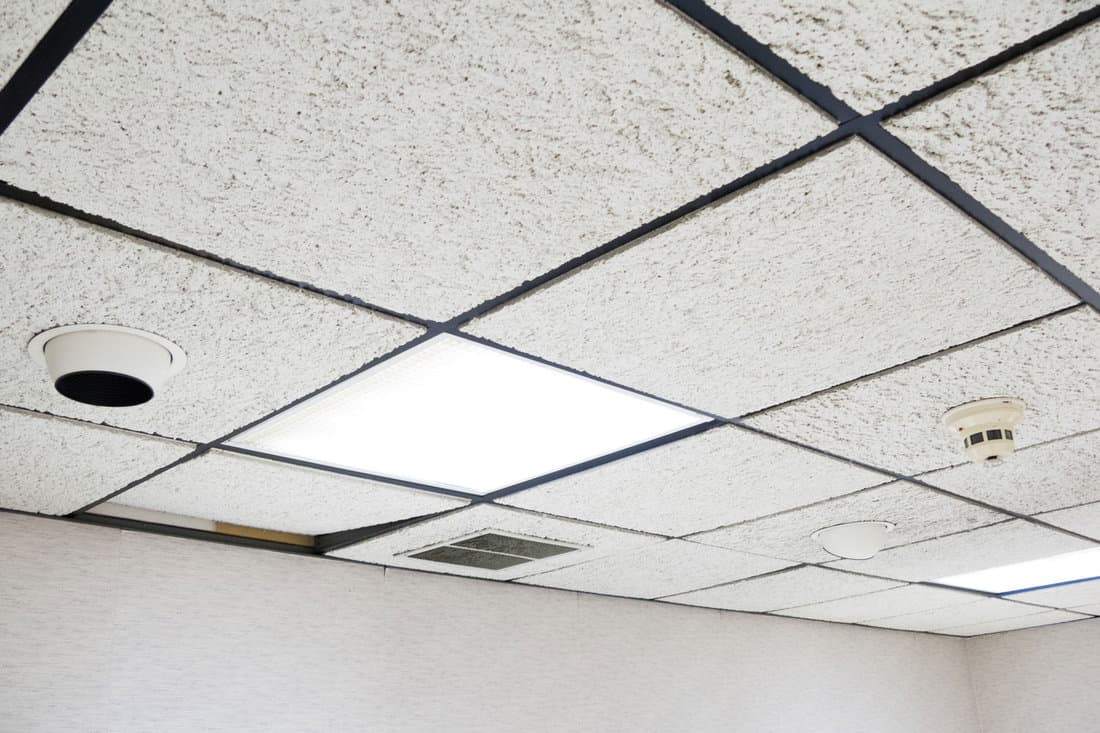 While you shouldn’t suspend heavy items from a drop ceiling, smaller items are easy to hang. Because of the metal grid structure, it’s easy to use a piece of wire or bend a paperclip to create clips for hanging small items. Many school teachers do this to hang classroom decorations, for example. Some stores also hang decorations and small items from their drop ceilings.

There are hooks specifically created to hang items from dropped ceilings. One such product is this one:

What Kind Of Lights Go In A Drop Ceiling?

When it comes to lighting options with your drop ceiling, fluorescents are the most common. However, LED panels are available as well.

If you don’t want to go with one of the above options, you have a couple of obstacles. Your drop ceiling cannot support substantial weight because it’s not a solid structure. This could make it more difficult to use some lighting fixtures but not completely prevent you from using them. If you want to use a fixture not designed for a drop ceiling, you can build supports above the ceiling to support the lighting.

You can see in the example below that recessed canister lights are used with this drop ceiling; refer back to other considerations, as discussed above, for tips on incorporating these fixtures.

Drop ceilings are a good DIY project that can upgrade a room quickly. Manufacturers recommend leaving three to eight inches above the ceiling. Most locations require your ceiling to be at least seven-feet above the floor. 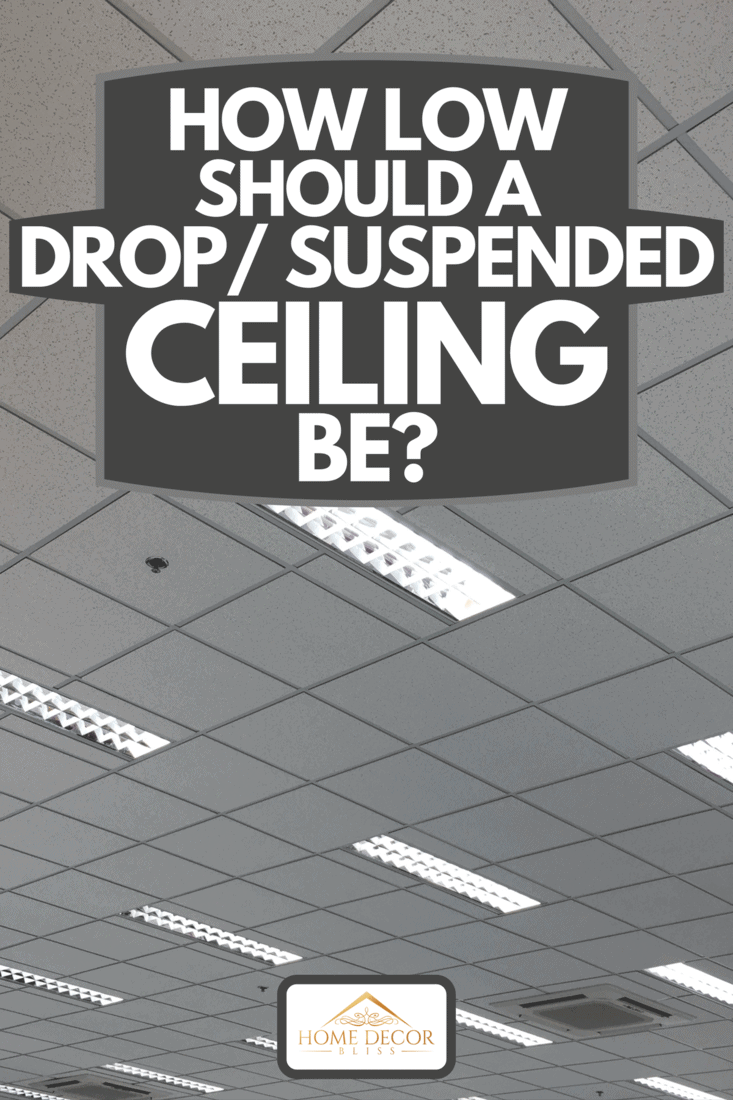