Are you wanting to buy a duvet, but you're not sure what you need your budget to be, how long they last, or what options are available? Have no fear, we have the answers for you right here because when it comes to your home, we want you to have the best!

A regular, plain duvet will generally cost you between $30-$140. The price will vary based on size, the fabric used, the pattern on the fabric, and the material used for batting or stuffing. 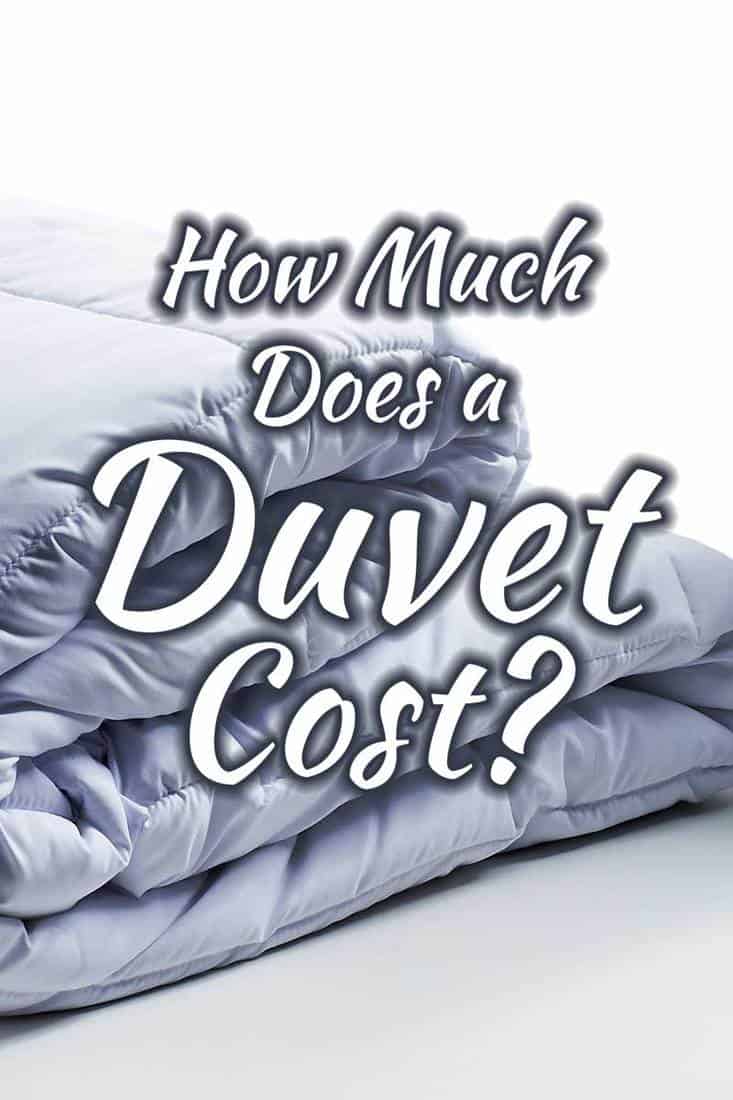 With that basic mystery solved, you might now have more questions that need answering before you feel like you can make an informed decision. You may also want more details on duvet prices. Keep reading for all the information you may need to make your decision.

What is a Duvet?

A duvet is generally a white, very lightly quilted blanket, that gets placed into a duvet cover.

The above image is a great example of a solitary duvet without a cover. Click here to check it out on Amazon.

Below is a duvet cover set, which also generally comes with pillow covers to match. Click here to check it out and get more details from Amazon!

A duvet cover is the second part of any duvet purchase. Not only does it help you decorate and coordinate with whatever theme you're working with, but it also helps you keep your duvet clean, and it makes washing your bedding easier.

Duvets are almost always white, which means that they can get dirty easily, and as I'm sure most of us know, it can be difficult fitting a giant blanket into a standard household washer or dryer. If it's a white blanket that gets dirty often, you're going to be faced with that struggle a lot more often then you're going to want. That's where a duvet cover comes in!

A duvet cover is essentially a pillowcase for your blanket, which is actually a perfect analogy. Bedroom pillows are almost always white, and you put a cover on them to help keep them clean and to accessorize. Duvet covers are used for the same reason. When the cover gets dirty, you take it off the duvet and wash it. Doing this is much easier than trying to stuff your queen-sized blanket into a washing machine and dryer.

Many duvets are also stuffed with down, which makes washing them kind of a pain, as down has a proclivity to clump together when it's washed. You can avoid having a clumpy, lumpy blanket by using a duvet cover!

Why Are Duvets So Expensive?

Buying a duvet can add up because it really comes with more than one purchase. You have to buy the duvet itself, and that specific price will vary quite widely based on the size and overall quality of the duvet, with variations in price that can exist around one hundred dollars. Once you've made that purchase, you then need to buy a duvet cover. Based on that size and quality, you can end up spending between twenty-five to one hundred dollars just on the cover.

If you're wanting to save money, making your own duvet cover is most certainly a viable option. Since it really is just a pillowcase for a blanket, you'll just need enough fabric, and a sewing machine. While this may not give you something as intricate or detailed as you may want, it's a good way to protect the duvet while splitting up your big purchases.

How Long Will a Duvet Last?

There isn't really a solid "one size fits all" answer for this, since the length of time that each duvet will last will depend on the quality of the duvet, the quality of the cover, and the type of treatment and care they both receive. A duvet will last longest if the duvet cover is regularly washed and replaced when needed, and if the blanket itself stays flat on your bed so the stuffing doesn't get shifted around and lumpy, or worn out unevenly.

Unfortunately, no matter how hard you try, the duvet will wear out, and you're going to have to buy a new one. When it is time to wash the duvet itself, just check the care information on the tag. It will tell you whether or not you can machine wash it (usually based on whatever the filling is made out of), or if you need to take it to a dry cleaner. Do your best to take care of it, and it will last you for years!

How Often Should You Buy a New Duvet?

While there isn't a set time period for buying a new duvet, there are a number of ways you can check your duvet to see if buying a new one might be in your best interest.

How Much is a King-sized Duvet?

If you look up "King Sized Duvet" on Amazon, you can see what pops up as their top recommended product by clicking here.

You can purchase a king-sized duvet from Amazon for anywhere between thirty dollars and one hundred and twenty dollars. The difference in price is due to the quality of the blanket and its filling.

You're then going to need to purchase a king-sized duvet cover.

Check out this amazing King-sized duvet cover set on Amazon by clicking here!

Remember to keep in mind that this picture is a picture of the cover on top of the duvet, not the duvet itself. The first several results that pop up when you look up "king duvet cover" on Amazon range from thirty to sixty dollars, with the plainer options being cheaper, and more detailed belonging closer to the expensive side.

How Do I Choose a Duvet?

When it comes to duvets, you have two decisions to make. You need to buy the duvet itself, which is the blanket part, and then you're going to need to buy the duvet cover, which is essentially a pillowcase. When it comes to the blanket itself, once you know what size blanket you need, really the only choice you have left is to decide what kind of filling you want inside the duvet, like goose down or synthetic fiber.

Choosing a duvet cover can be much harder. This is where patterns, colors, and type of closing mechanism all need to be considered, which are essentially all the choices you'd need to be making if you were buying a comforter. Break it down by asking yourself these questions, and build what you're looking for in your head as you go along.

Once you can answer all those questions, you should have a pretty good idea in mind of the kind of product you're looking for!

Duvets are pretty simple items, and the one that you choose is dependent on budget, size, and preferred materials. Once you have those points nailed down, it should be pretty easy to choose the one that best fits your needs. Then you can pick out your cover, which is the fun part!