Adding a loveseat to an empty spot occupying your living room or den can definitely pull a room together. Not only does it add to the room's ambiance, but it also adds a cozy place for you or your guests to sit. But adding a new piece of furniture has its challenges. Is a loveseat something you can move on your own? How much does a loveseat weigh? We've done some investigating and have the answer for you.

The weight of a loveseat depends on a number of variables including height, width, length, and the materials of which it is made. A loveseat can weigh anywhere from about 100 pounds to well over 200, depending on the aforementioned variables.

Now that you know the range in which a loveseat might weight, let's discuss those variables further. We'll go over the structure of a loveseat, as well as answer more questions you might have. Continue reading for all the details! 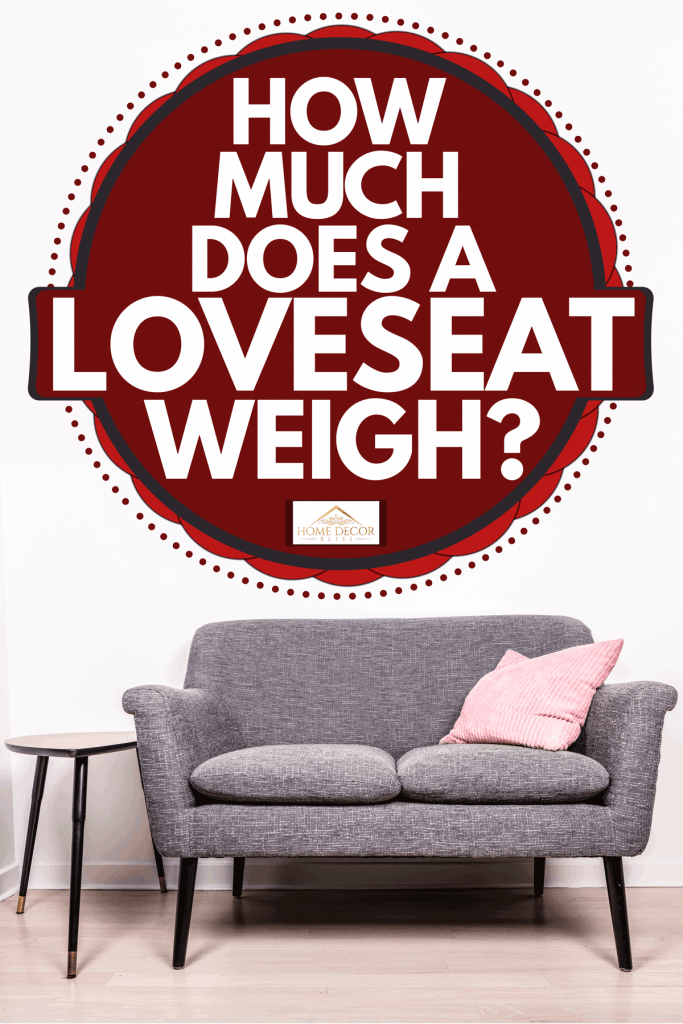 What's the difference between a loveseat and a standard couch? 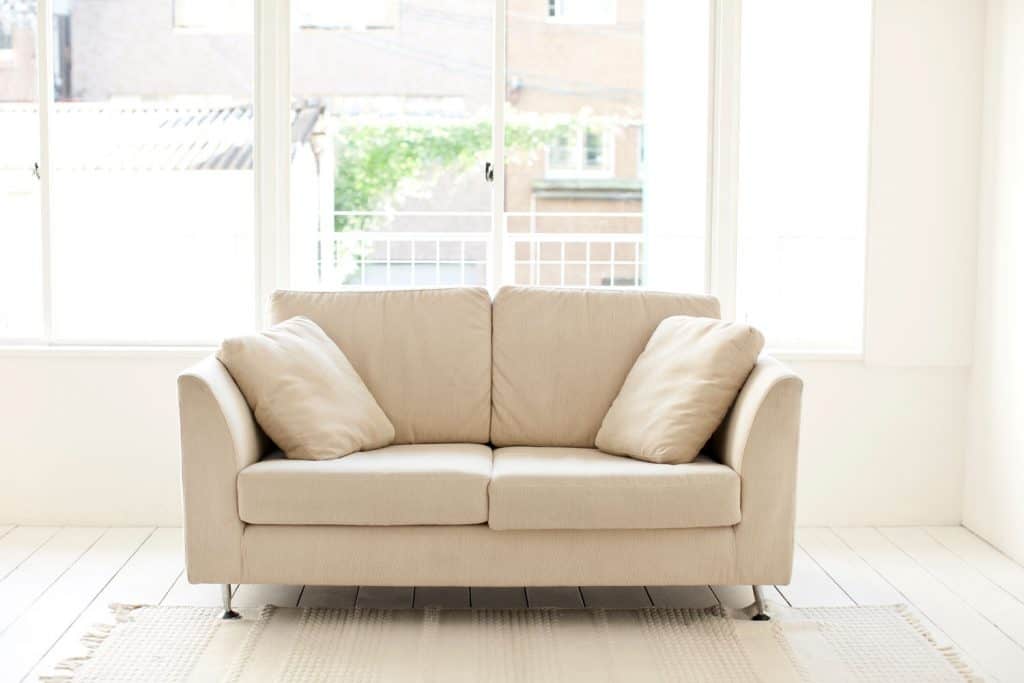 So what constitutes a loveseat? A traditional loveseat was an upholstered two-seater in which two people can sit. Overall, it forms an "S" shape. Due to its structure, the two occupants face different directions with a modest barrier between them. Sometimes referred to as a British two-seater, gossip chair, kissing bench, or a handful of other monikers, this type of loveseat has fallen out of fashion in modern times, though there are still some versions available at popular retailers such as Amazon.

View this kissing bench on Amazon.

The "loveseat," for the purposes of this article, is a small, two-person couch bearing many properties of a traditional couch with the exception of size. Standard couches seat three people and have three cushions (or more). These types of loveseats, two-seater couches, are the ones you will find in most modern homes, so we will discuss the dimensional properties of these.

The standard height of a loveseat from floor to cushion is anywhere from about 16 to 24 inches, though can sometimes be more, depending on the style. The overall height can be as small as 26 inches and goes all the way to almost 40 inches. A short, squat loveseat is going to naturally weigh less than one that is several feet tall. The more area a loveseat covers, the heavier it will be.

The width of a loveseat tends to hover right around 36 inches, so this measurement won't have as much bearing on the weight as some other variables. Although the width does stay around the same measurement from couches to loveseats to armchairs, any variance will affect the overall weight.

Some loveseats even have a chaise lounge extension so one cushion is wide enough for a person to stretch their legs out. This extension would add quite a bit of heft to a loveseat, not to mention making it significantly more awkward to move.

Length can be a hefty variable. Though loveseats are considered two-seaters, some can be almost as long as a traditional couch. No matter the length, a loveseat will have one long singular cushion or no more than two cushions. At times, they are long enough to seat more than 2 people. From arm to arm, the length of a loveseat can vary anywhere from 48 to 80 inches long. That's quite a variance. The longer your loveseat, the heavier and more awkward it will be to carry.

Want to know more about couch sizes? Read our article How Long Is A Couch [Standard Couch Sizes].

The material used in crafting the loveseat will make all the difference in the weight. Some older, antique loveseats are composed of mostly heavy, durable wood with minimal upholstery and non-removable cushions. These types of loveseats are covered in embellishments and definitely on the heavier side. 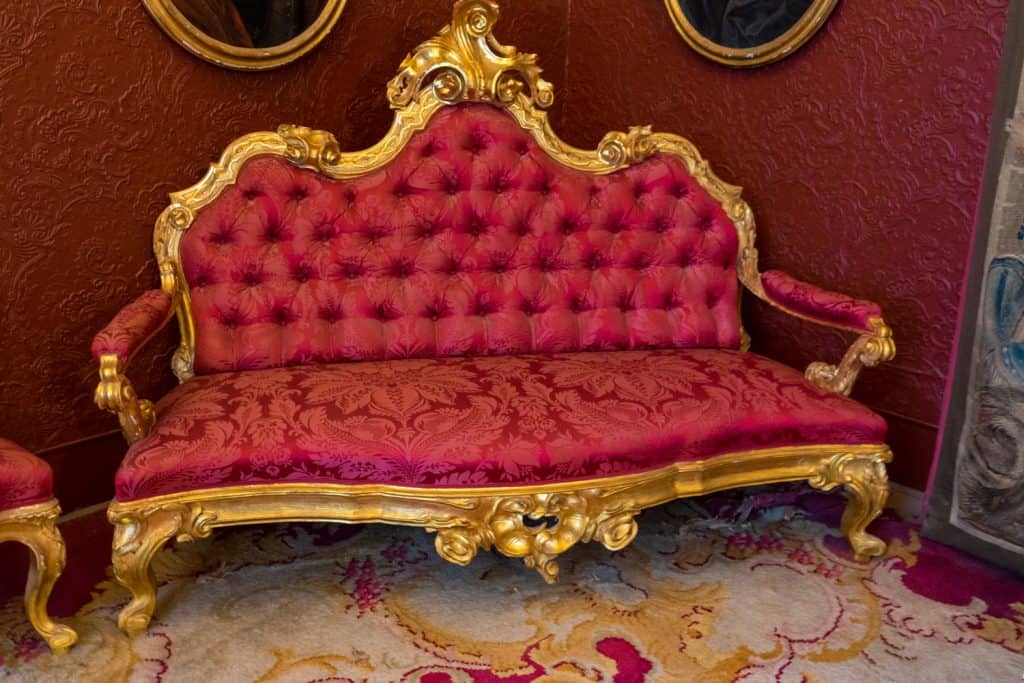 The upholstery can also make a difference. Loveseats upholstered in leather also tend to be heavier in comparison to other fabrics. If you're worried about getting a piece of furniture that is too heavy, or not heavy enough, always inquire about the loveseat's structure as well as upholstery.

The overall style of the loveseat has a lot of bearing on the weight. Remember those kissing benches we discussed briefly earlier? All the extra construction and the odd shape of those loveseats would make them super heavy and difficult to lift, even with a friend. Many of these benches, as well as modern loveseats, have a metal frame.

Will a moving company move one piece of furniture?

Just about all moving companies would be more than happy to move a single piece of furniture. If this is a necessity for you, make a list of the movers in your area and call around for quotes. They'll take into consideration the distance you are from their company, the size and shape of the object, the distance of the move, and the number of people it will take to move the object. Don't be surprised if you get a lot of different numbers!

Also, consider moving the object yourself using some moving equipment. It's never advised to lift a heavy object by yourself, but many moving companies and hardware stores have equipment available for rent. This could potentially save you a lot of money. Ask about equipment such as a dolly, hand truck, and straps to make the move yourself.

Click here to see these moving straps on Amazon.

Does a couch have a weight limit?

All constructions have a maximum weight-bearing capacity, and couches are no exception. A couch's weight limit is generally judged on a per-cushion basis. That maximum is generally around 300 pounds per seat, though there are more heavy-duty couches that can hold more.

Couches with a reclining option will have a lesser capacity on the footrests - generally around 180 pounds. The internal construction will have everything to do with the weight-bearing limit. Consider a metal structure if looking for longevity as the cushions are easily replacable.

How many people can sit on a loveseat?

Loveseats are traditionally meant for two people. That's the whole reason for the name "loveseat;" they're created so two people can sit close together and have an intimate conversation. Although that was a loveseat in the more traditional sense, these short couches have modernized along with everything else.

As touched on above, some loveseats measure up to 80 inches long. That's six feet, and definitely the length of some standard couches. Three, or even four, people could sit on a loveseat of this length. It is, however, still classified as a loveseat as long as it only has two cushions.

The weight of a loveseat varies depending on its size and style but generally goes anywhere from 100 to over 200 pounds. If this is a weight you can't bear on your own, feel free to reach out to your local moving companies for assistance. Be informed about your purchase and plan accordingly. Happy loveseat hunting and moving!

Want to know how much a standard-sized cough weighs? We have a post about that, too: How Much Does A Couch Weigh? [By Type of Couch].