Board and batten has been a popular style for a long time, and although it was originally designed for function, it is now mainly used for its personality. Board and batten is traditionally an exterior feature, but you may be wondering how tall it should be when used inside too. It can be considered a form of wainscoting. We have thoroughly researched how tall your board and batten should be for both exterior and interior applications.

Board and batten is an exterior feature of wide boards and thin batten strips, which would traditionally cover the entire house face. It has also been used inside as wainscoting. It should generally measure either one-third or two-thirds the height of the ceiling. But it should never settle at half the height of a room.

Using board and batten can completely alter the face of a home or the style of a room because it adds detail onto an otherwise flat surface. Keep reading to learn what board and batten actually is, how tall it should be to avoid proportion issues, if the look is still in style, and more. 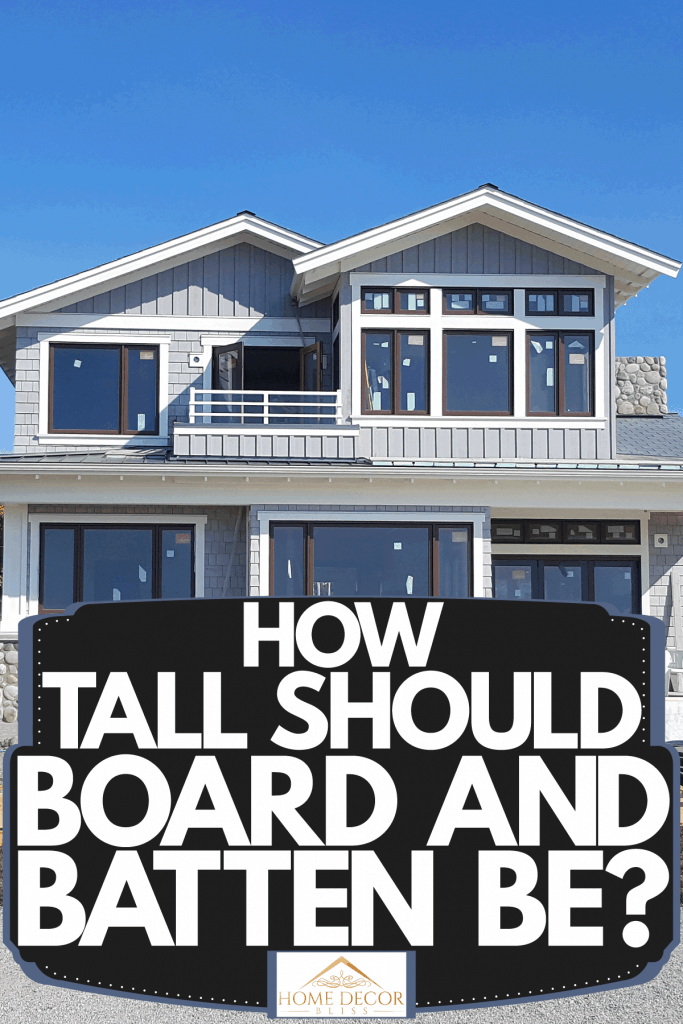 Is board and batten farmhouse style?

The name board and batten is literal because it combines wide boards with vertical battens that help cover the seams in between. The board and batten exterior design was originally a popular addition to old-fashioned barns, making the building unusually airtight for the time. 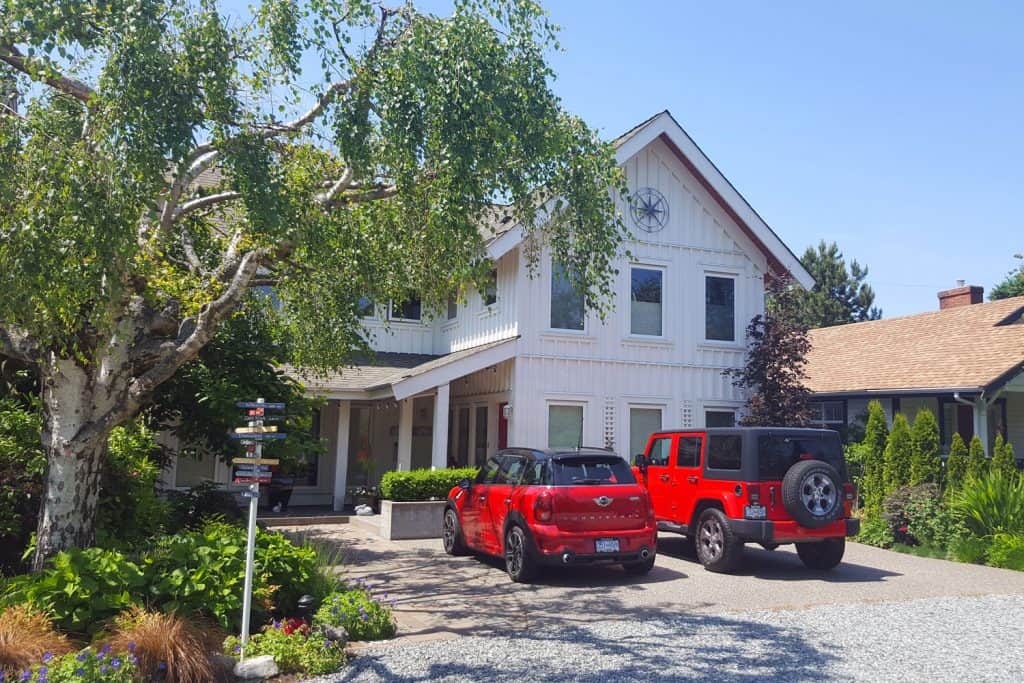 As such, the board and batten feature is frequently considered a farmhouse style. It is now popularly used for modern farmhouses. But board and batten may be found in other rustic interior designs, too, with similar country or cottage style scenes.

You can read the post "10 Types Of Board-And-Batten Siding" if you intend to use board and batten on the exterior.

Can board and batten look modern?

It is also possible to make board and batten appear more modern by increasing the spacing between the battens so that the pattern of the battens is less noticeable. Modern designs are characterized by minimalist features, such as simple surfaces with less detail.

Adding space to the battens is an effective way to make the style appear less detailed and coordinate with other characteristics. However, it is important to remember that board and batten on an exterior wall should always be secured to the wall studs.

When board and batten is used inside the home instead of outside, you can also use the surrounding décor to make it feel more modern. This will soften the impact of its natural rustic look.

You might also paint the board and batten a cool neutral like gray, which will remove the focus from the pattern and hide the appearance of natural wood. Similarly, a glossy finish would make the surface look shiny, which is also closer to a modern style.

How tall should board and batten be in a hallway?

Board and batten was first moved into the house itself for purely decorative purposes. As such, this practice is now considered a form of wainscoting when it covers the lower part of the walls. Wainscoting refers to many other interior wall coverings such as panels and beadboards.

So, the height of your board and batten should mainly satisfy your personal preferences. However, certain heights can be more naturally appealing, and they can also affect the apparent proportions of the room. As a general rule, it is ideal for a board and batten cap to reach a third of the ceiling height.

This should include trim, such as the baseboards or crown moldings. Baseboards are the long, thin pieces of wood that guard the feet of your walls. Crown moldings are fitted where the top of the wall meets your ceiling.

Sometimes, the board and batten can line up with the height of the window sills to create even lines along the walls. Unfortunately, this can make the rest of the room appear to sit on a foundation of board and batten.

It can drastically change the room and should only be used for personal preference. This may not align with the rule of thirds, which could potentially adjust the room's proportions so that it looks uneven.

Does board and batten make a room look smaller?

In some circumstances, it is possible to use a board and batten that sits as high as two-thirds of the ceiling height. This usually makes the room appear smaller. That’s because the pattern of the board and batten will make the ceiling appear lower than it actually is.

If the feature has a dark color, this will also make the room appear smaller. Darker colors tend to absorb light and can appear to recede. This will make the walls look shorter than they truly are. 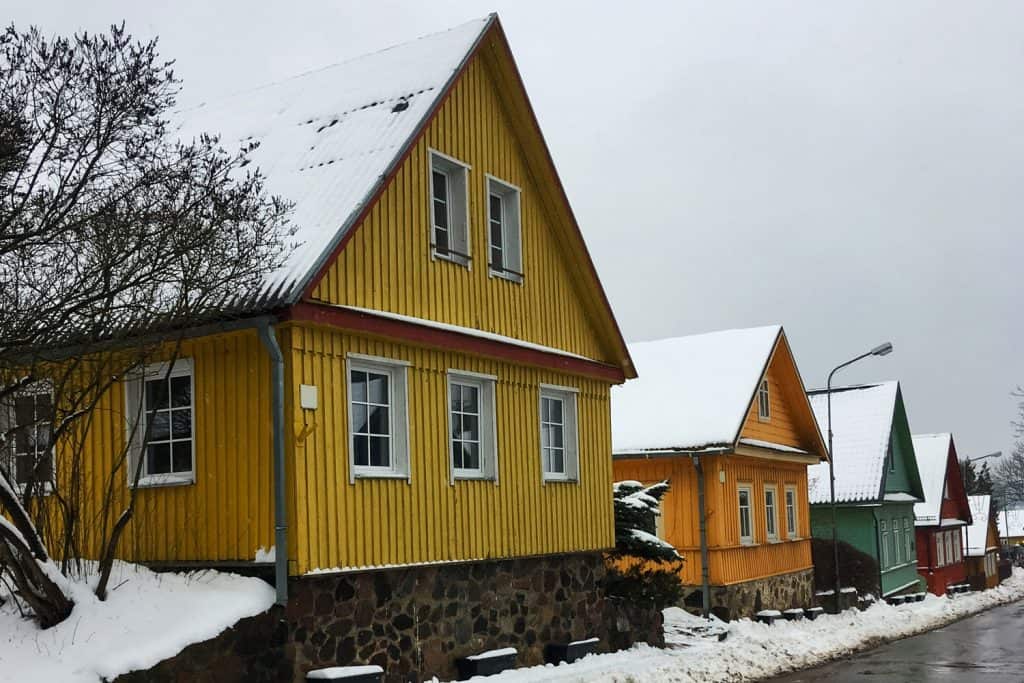 Meanwhile, shorter board and batten designs with brighter colors can make the room feel larger. White is commonly used for board and batten because it is neutral; it blends with the scene while still brightening the room. And because white reflects all colors, it will also make the lower part of the walls appear larger.

How tall should board and batten be for an 8-foot ceiling?

Most ceilings are 9 feet tall, which would mean that a room with 8-foot ceilings is unusually short. As such, it would be ideal for the board and batten to sit slightly lower, 32 inches or slightly over 2.5 feet.

It is best to avoid using the two -hirds option here because the ceiling is already too low. Meanwhile, a one-third board and batten could potentially make the room feel taller.

You can read the post "What's The Standard Ceiling Height? [Answers by House Floor]" for more details, which can help determine your ideal board and batten.

Is board and batten still in style?

That’s because the design is both stylish and practical. The wall covering can potentially help protect the lower part of your walls from everyday damage, such as furniture scrapes. Anything that can serve a useful function will never lose its popularity.

Also, the board and batten feature has the unique ability to decorate any bare wall. And because it can also reach up to two-thirds the height of the ceiling, it is unlike other wainscoting styles.

Is board and batten the same as shiplap? 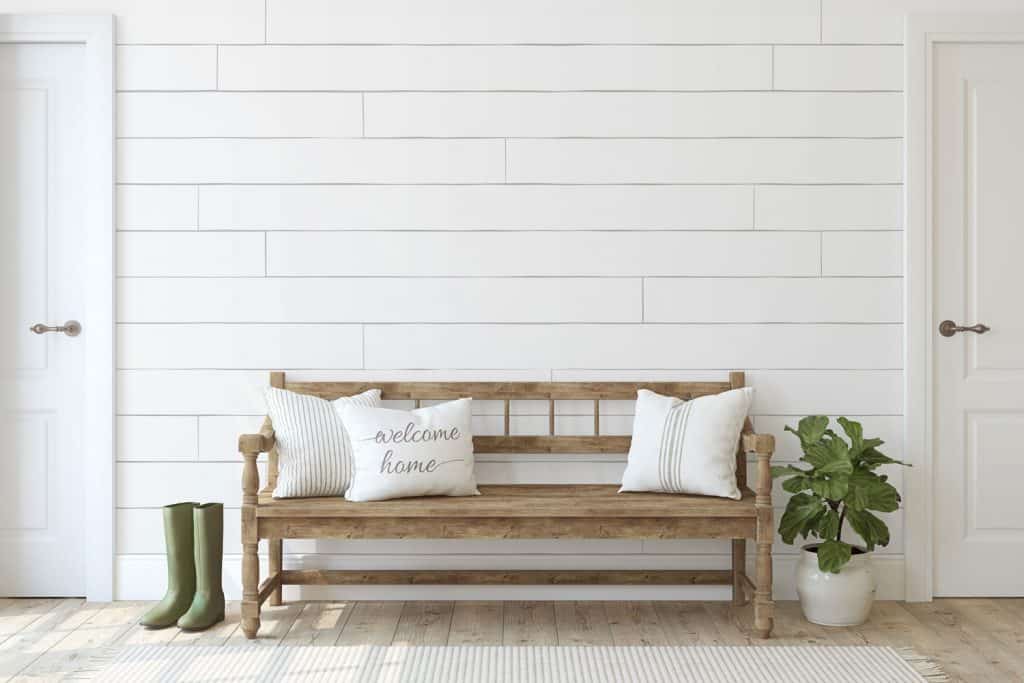 No, these two are not the same feature, although they share several characteristics. Both were originally designed for exterior use but eventually moved inside for purely stylistic purposes. They even provide the same rustic appearance since shiplap is also commonly used for barns and sheds.

However, the primary difference is that shiplap is defined by its overlapping boards, whereas board and batten is joined by its seams using separate pieces of wood. There is a signature shadowy gap between shiplap boards, which is often the reason it is used instead.

And although shiplap can sometimes be designed in various directions, it is traditionally used horizontally to recreate the classic exterior designs. This tends to make the room look longer, while vertical shiplap will make the room look taller.

Board and batten is a unique and powerful addition to your home for both the exterior and interior. Although it can be grouped in with other wainscoting styles, it can also reach much higher on the wall. But if this freedom is used incorrectly, the proportions of the room will become completely unbalanced.

It should now be clear when board and batten is appropriate for your home. It is an effective way to transform your bare walls into a detailed and eye-catching room when properly applied.