Most people who want to hang objects on drywall rely on stud finders. They’re efficient tools that save you from drilling too many holes in the wall. Do you have a Hart stud finder and want to know how to use it? We have researched this to come up with simple steps for you.

A Hart stud finder uses five sensors to locate the center of studs. To operate this tool, follow these easy steps:

These are the shortened steps for using your Hart stud finder. In this post, we will talk about these steps in detail. We will also discuss safety precautions in using stud finders, common issues with stud finders, and more. So continue reading to get further information on this topic. 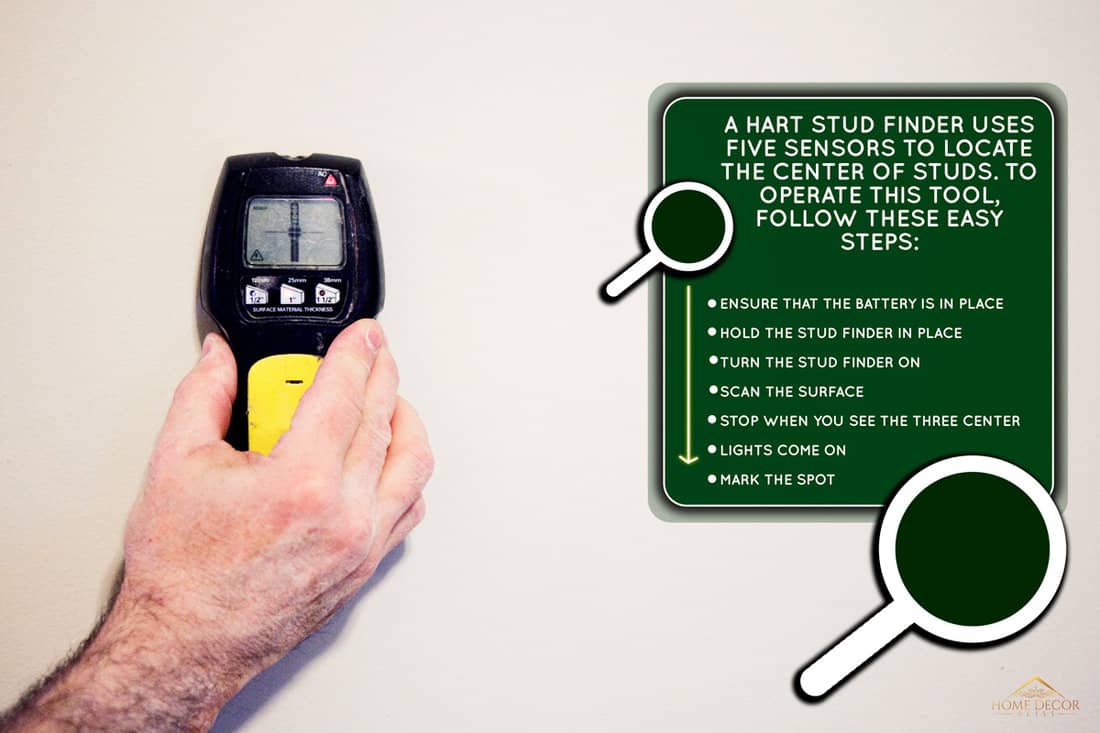 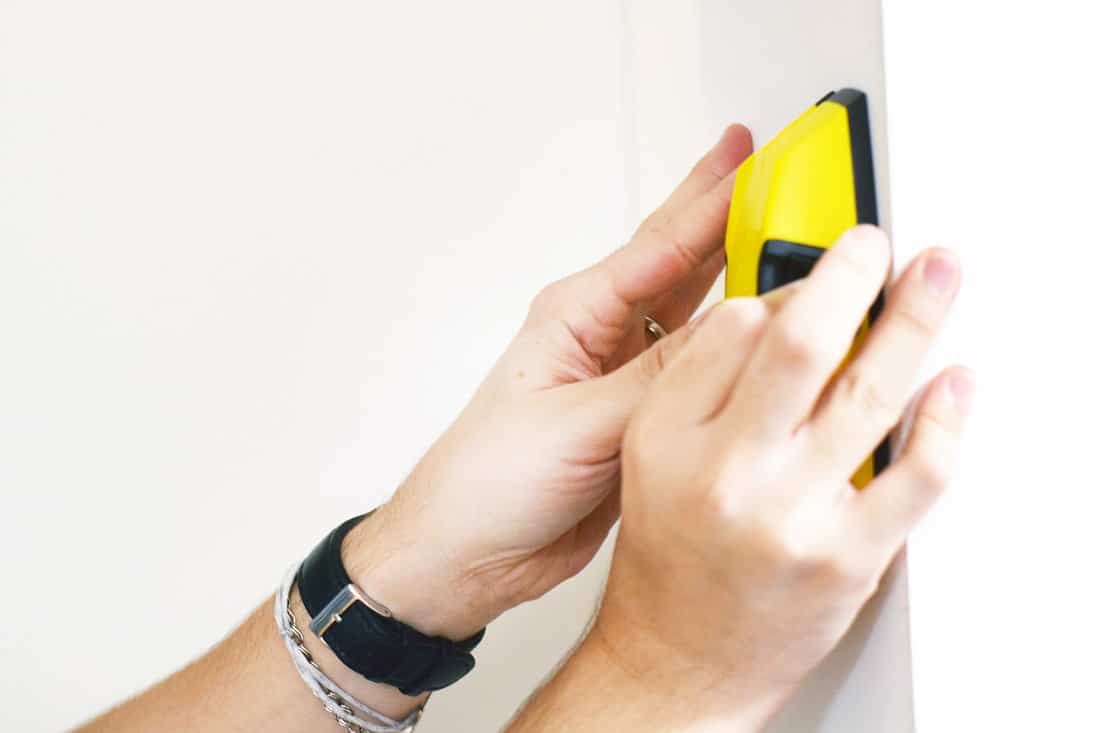 Hart has three stud finder models: basic, advanced, and professional. These steps are for the advanced model, which has five sensors. These sensors identify the edge and center of a stud.

1. Ensure That The Battery Is In Place

When you open the stud finder package, you'll see that the batteries are not inserted yet. The Hart Advanced Stud Finder uses two AA batteries. Make sure that you use new batteries to efficiently and accurately operate this tool.

Depress the battery cover at the back of the unit and gently lift it to insert the new batteries. Once they are in, put the cover back in place. You’ll hear a click indicating that it is properly closed.

2. Hold The Stud Finder In Place

Place the stud finder at the height where you want to hang the object. Hold the tool firmly against the wall before you turn it on.

3. Turn The Stud Finder On

The power button is the blue button on the right side of the stud finder. Remember to hold this button while you are scanning or else it’ll only work briefly.

This unit does not need calibration, so you can immediately scan your walls. It is important to note that LED lights will display when it has detected any objects on the wall.

The manufacturer notes that this stud finder is designed to detect objects behind walls like pipes, wood, beams, and the like. You should rely on resources such as floor plans if you are not sure what's behind your walls.

It also helps to know that studs are spaced 16–24 inches apart, so if you find one stud and want to find another, this is a good reference for you.

When scanning the surface, keep your hands on the handle. The unit may not give accurate readings if you hold it on the sides.

5. Stop When You See The Center Lights Come On

As mentioned, this stud finder has five red LED lights. The two outer lights are signals that you have detected the edge of the stud. The three lights in the middle will give you the accurate position of the center of the stud.

You want to attach a screw or nail at the center for stability when hanging objects on the wall.

Lastly, when you find the center, mark this spot before drilling a screw or hammering a nail.

The Hart Advance Stud Finder also detects live wires.  To correctly identify live electrical wire, scan in both directions slowly.  You can pass through the same location multiple times to be sure.

When the stud finder senses an electrical wire, the yellow lightning bolt icons will illuminate.

Always be cautious when drilling near a live wire. If you really need to do so, make sure that the electric power supply is shut off.  There is a possibility of you being electrocuted if you fail to heed this warning.

On What Surfaces Can You Use The Stud Finder? 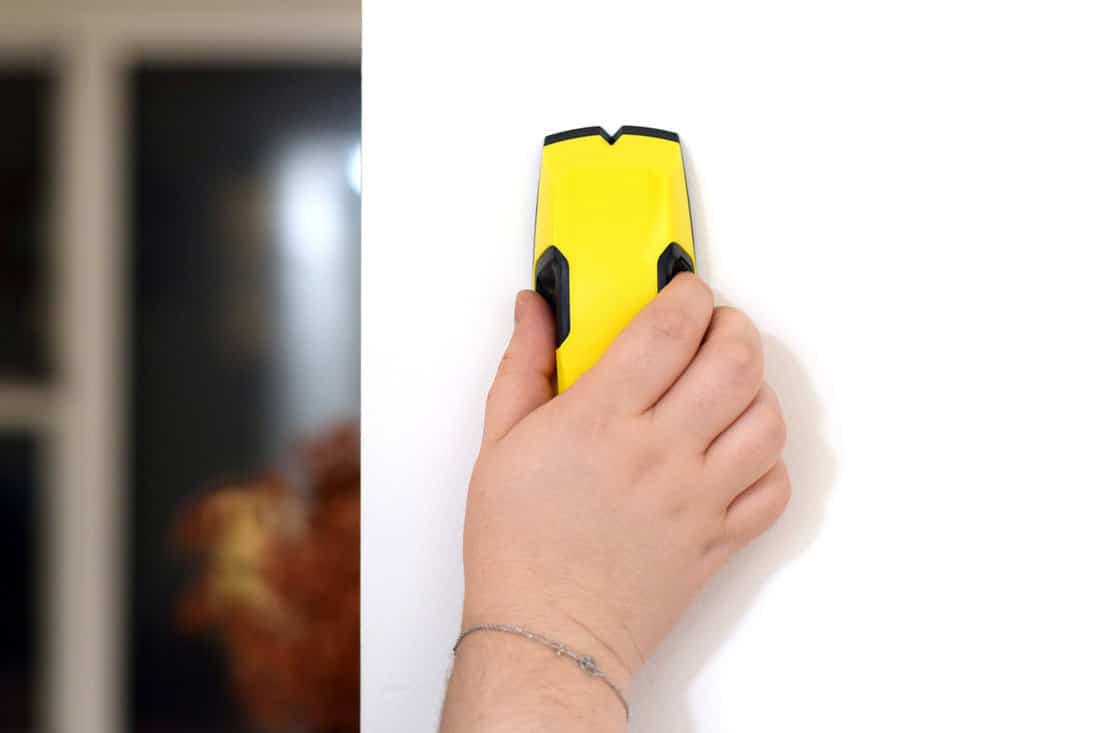 There are different circumstances where a stud finder may not work as accurately as it should. The Hart stud finder can scan through different materials with some exceptions.

The manufacturer does not recommend using the stud finder on these surfaces: 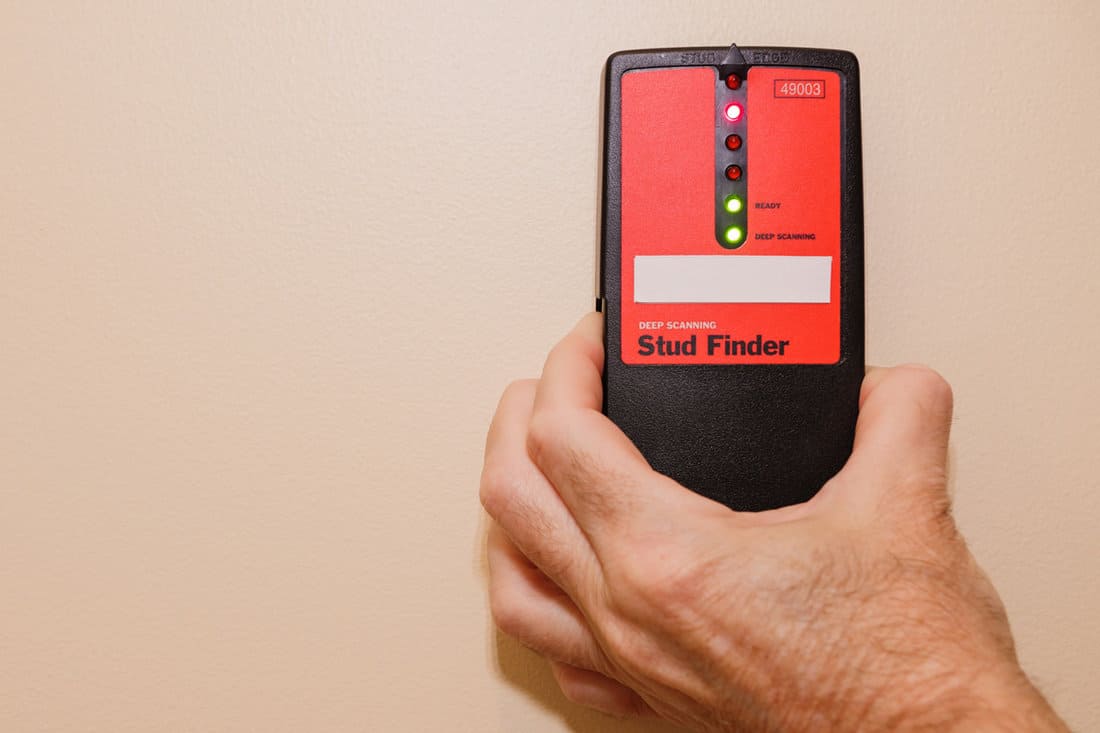 As with any other tool, the Hart stud finder is not free from issues. Don’t fret if you have encountered these concerns, they can be solved with basic troubleshooting.

This is a sign that the battery is running out of power. An old battery is not capable of providing enough energy to light up the LED lights. Apart from that, the device can also give off inaccurate readings. Replace the batteries to solve this issue.

If you are not finding studs, it may be because there are inconsistencies on the surface. The stud mostly works accurately on flat surfaces. The surfaces where it will not work were mentioned in the previous section.

Difficulty Scanning Near Windows And Walls

The LED lights do not illuminate when the stud senses a change in density, which often happens on walls and windows. To solve the problem, start scanning away from doors, wood trims, outlets, and switches.

This can happen if you’re scanning the wall for a period of time. You have to release the button and press it again for a new scan to reset it.

This problem also happens when the user is holding the tool incorrectly. Hold the stud finder by the handle instead of the base for an accurate reading.

This happens when the stud senses construction inconsistencies such as pipes or wires.  You should keep the stud finder away from metals or outlets. Three inches is a safe distance. 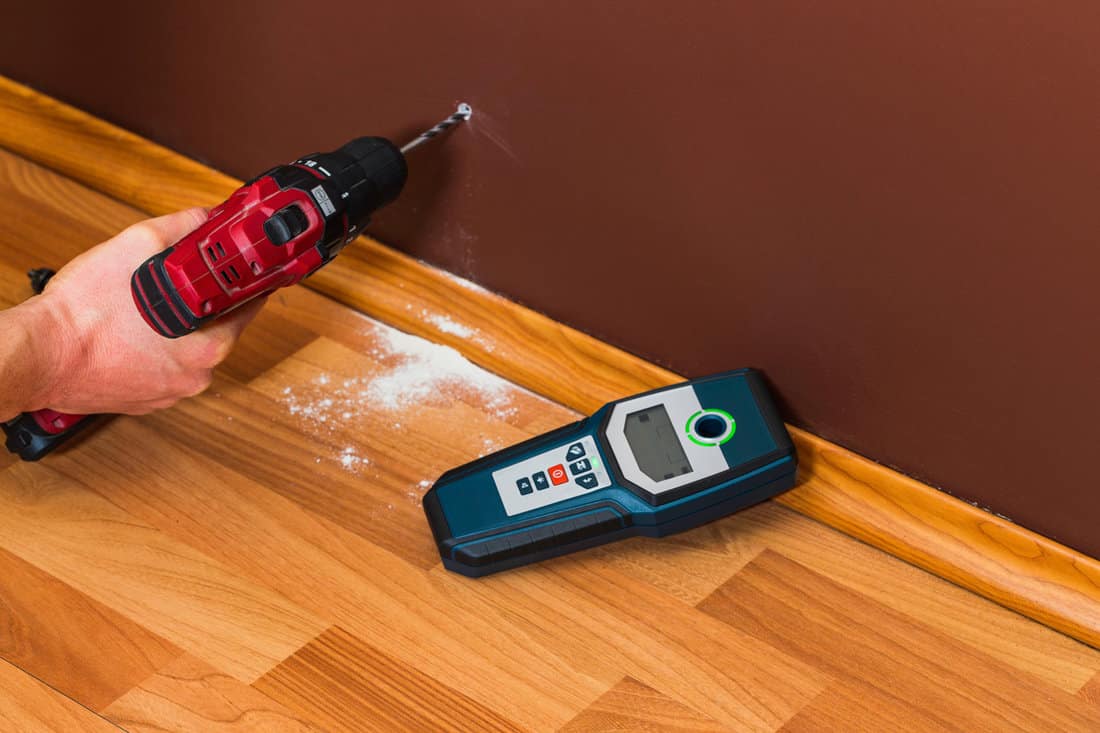 The issue with this type of finder is that it can also sense metal even if it’s not connected to a stud. There are two types of a magnetic stud finders: stationary and moving magnetic detectors.

These devices are not especially reliable because it is up to the user to feel a pull when detecting a metal stud, nail, or a screw attached to a stud. You have to move the detector in different directions to find what you are looking for.

These types use suspended magnets that react to hidden metals. Unlike the first type, these are not dependent on the user.

Click here to see this magnetic stud finder on Amazon.

Younger generations use their phones for many purposes. As technology progresses, apps are developed for almost anything. There are now stud-finder applications you can download to your phone.

These apps use your phone’s feature to detect metals. They work depending on your phone’s magnetometer. However, they may not be as reliable, as they lack the qualities of real stud finders.

At the end of the day, a real stud finder is still the better choice.

A Hart stud finder is not difficult to use. Unlike other stud finders, it doesn’t need to be calibrated. But you should keep in mind that there are limitations when it comes to the types of surfaces this stud finder can scan.

Also, the Hart stud finder can scan walls to find live wires. This feature will help you avoid these wires when drilling your wall. You should be able to operate the tool smoothly if you follow the simple steps provided in this article.

If you found this post informative and helpful, check out these other articles:

How Far Apart Should Wall Studs Be

How Far Should A Screw Go Into A Stud?