A stud finder has many applications and is very useful for locating studs, joists, and even live wires. Here are simple steps for operating your Stanley stud finder:

These are simplified steps in using the Stanley stud finder. In this post, we will talk about each step in detail. We will also discuss other related information that you need to know regarding studs and stud finders. Read on to find out more about this subject. 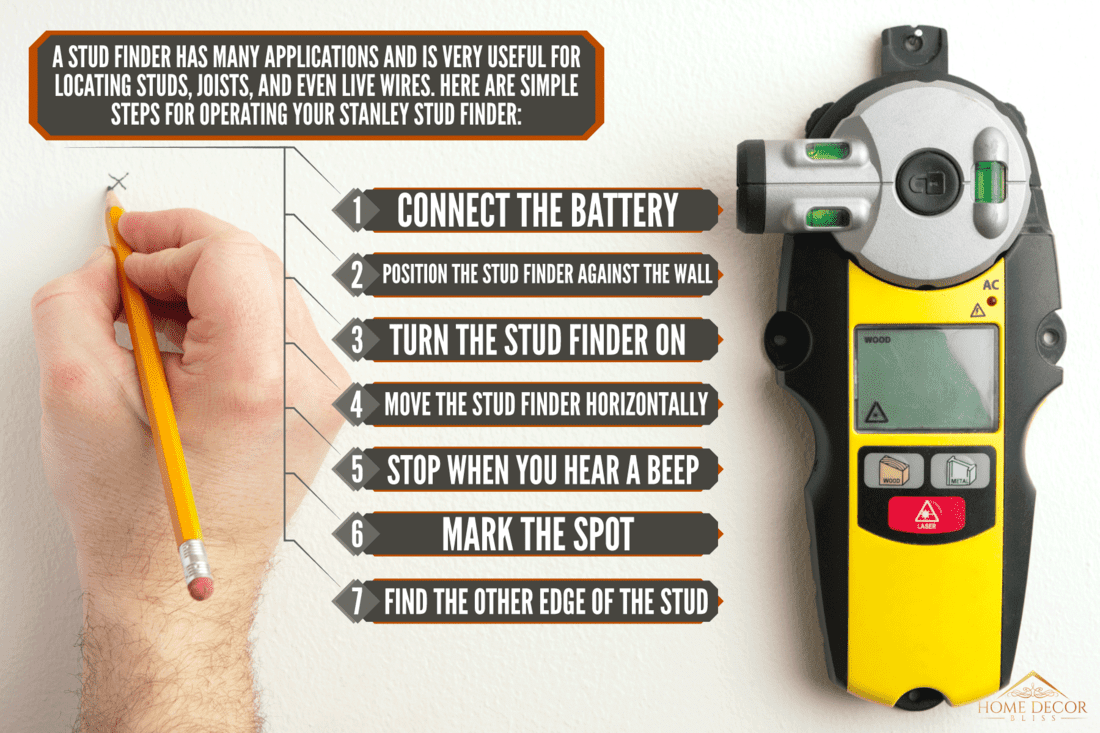 How To Use A Stanley Stud Finder

Stanley has different types of stud finders. Some use LED indicators, while some have LCD screens to signal that you have detected the stud.

The steps listed here are for the Stanley stud finder S100. 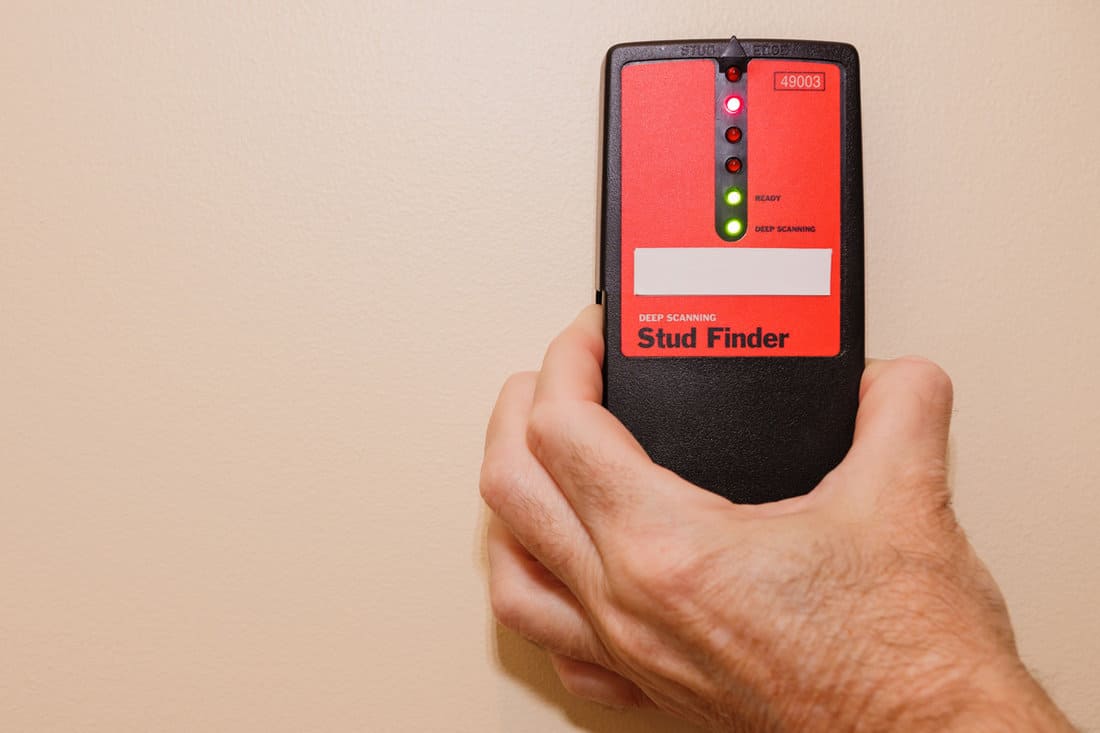 This stud finder uses a 9-volt battery that may not be included when you purchase the tool. Simply open the back and slide the battery in place. Make sure that the back is properly closed before using the unit.

The manufacturer suggests replacing the battery when you see the LED indicator flashing green. This signals that the battery is about to run out of power.

2. Position The Stud Finder Against The Wall

After making sure that the battery is properly inserted, you can locate the studs. Place the stud finder firmly against the wall.  Make sure that you are holding the tool at the height where you intend to drill a screw.

It is important to note that this particular type of stud finder can scan through gypsum drywall, plywood sheathing, hardwood floors, linoleum over wood, and wallpaper.

3. Turn The Stud Finder On

Press the activation button located on the right side of the stud finder.  The green light in the middle and the red LED on top of it will light up.

The unit will calibrate. When the red LED light goes off, it means that calibration is complete.  Note that when the activation button is released, the tool will be turned off.

Next, slowly slide the stud finder horizontally to find the stud. Make sure that you are moving the device in a straight line. Continue gliding the device across the wall until you hear a signal that you have detected a stud.

As the tool detects studs, the red lights above the green one will blink.

5. Stop When You Hear A Beep

When a stud is detected, the red LED light at the top of the tool will light up, and you will hear a beeping sound. Stop when you hear the sound.

Now that you have found the edge of the stud, make a mark. This tool has a marking V-shaped channel at the top of the red LED light.

7. Find The Other Edge Of The Stud

Next, you should locate the other end of the stud. Move the stud finder to the right and mark the other edge once you hear the beep. Typically, the size of a stud is 2x4 or 2x6 inches.

When you find the other edge of the stud, mark the center where you’ll insert the nail or screw.

Other Stanley stud finders typically have the same operating instructions, although others may have an LCD screen in place of the LED light indicator.

What Is The Distance Between Wall Studs?

When you are planning on hanging objects on the wall, you also need to know the distance between each stud.

Generally, wall studs have 16 to 24 inches of space between each other.  Your walls may contain pipes apart from studs, so if you found something closer than 16 inches, it may not be a stud.

For your safety, be careful when nailing and drilling your walls. Knowing how far apart the studs are will help you properly lay out your DIY project.

What Does AC Mean On A Stanley Stud Finder? 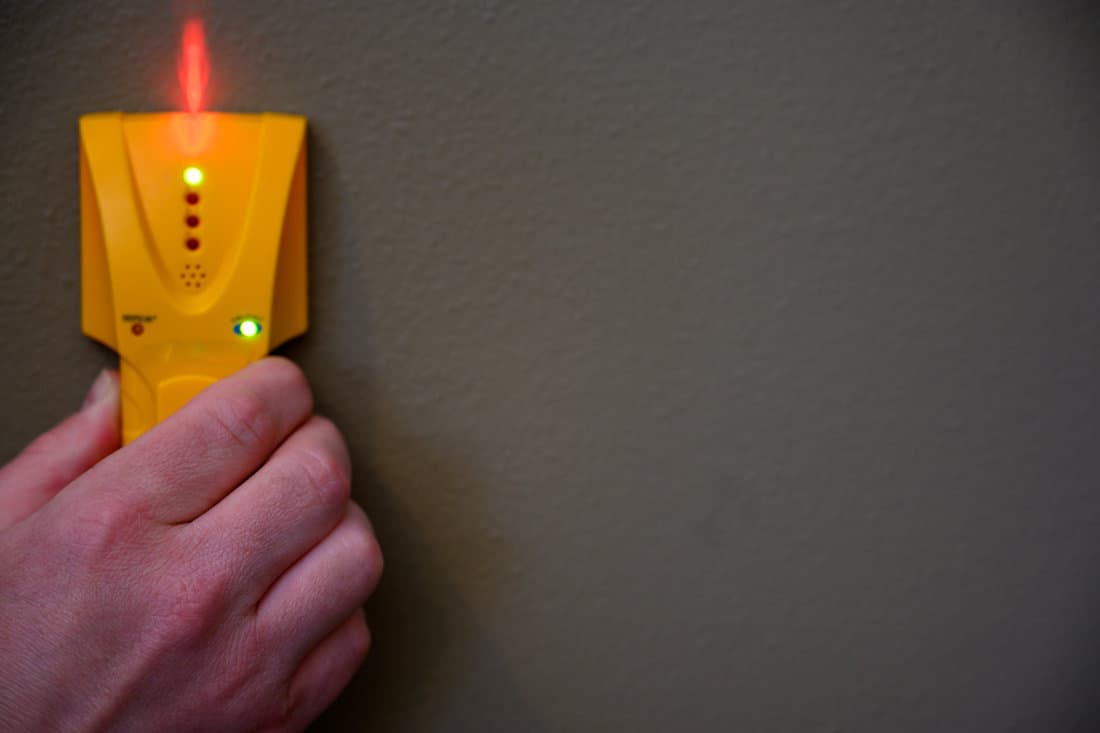 When you look at the Stanley stud finder, you’ll see the letters AC beside a voltage icon. This function detects live wires, and it is made to warn users that there is an electrical line behind the wall.

When you come across live wires, this LED light will illuminate, and you’ll hear beeping sounds. Take note that the AC indicator may go off even if there are no electrical lines directly under the stud finder. This is because static charge may develop on walls.

To accurately locate a wire, scan the wall while holding the tool ½ inch away from the surface. Note that the Stanley stud finder will not be able to locate live wires that are encased in metals and or behind thick walls.

How Do Stud Finders Work?

Before the days of stud finders, the easiest way to locate studs was by knocking on a wall. Of course, this is not a foolproof method, and there is a big chance of an accident happening.

In the early 20th century, magnetic stud finders were born. These only detect nails, screws, or fasteners that are supposedly attached to the wall.

Click here to see this magnetic stud finder on Amazon.

Nowadays, electronic stud finders have many other functions apart from detecting studs. These tools use sensors and detect signals to locate studs behind walls, usually drywall.

What Are The Types Of Electronic Stud Finders?

Edge finders and center finders are available on the market.

As the name suggests, edge finders locate one edge of the stud after the other. You should move the stud finder twice to locate the stud's edges. When you locate both edges, you’ll have to mark the center off and work from there.

Why Is The Stud Finder Not Finding A Stud?

There are some reasons why stud finders don't function the way they should. 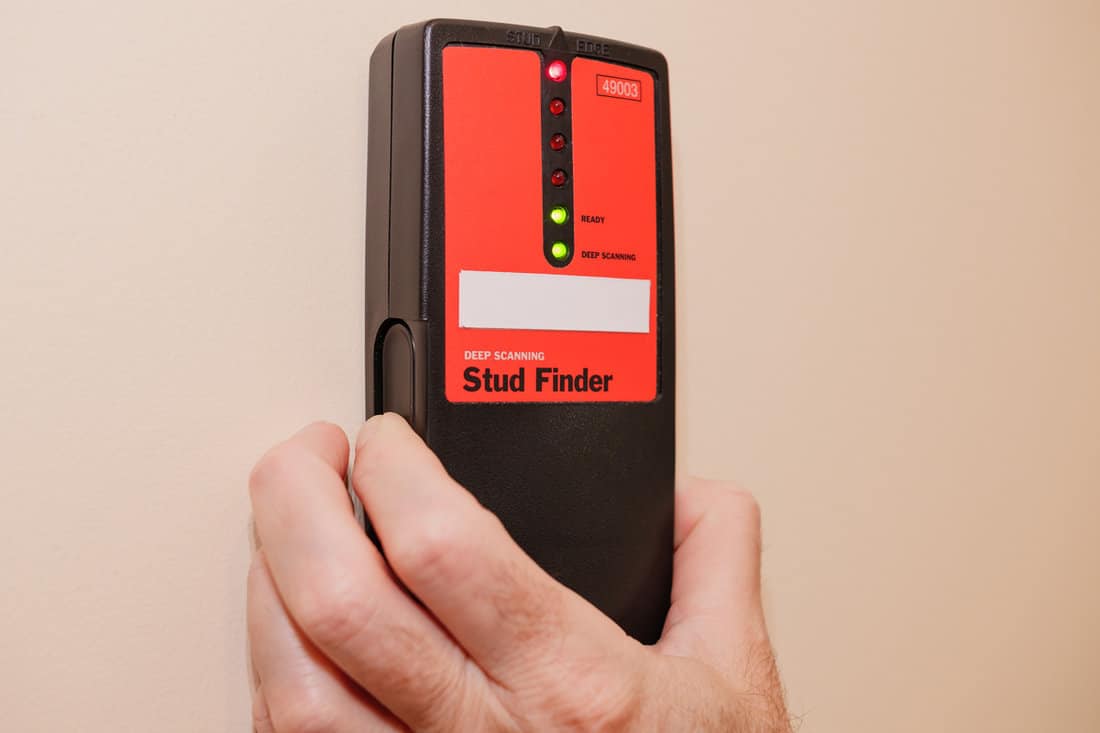 How To Calibrate A Stud Finder

For Stanley stud finders with LCD Screens, you have to hold the unit firmly against the wall and turn it on. The calibration cycle will last for one to three seconds.

You will see “calibrating” displayed on the screen. When the calibration is done, the display will change to “ready”.

For Stanley stud finders with LED lights, press and hold the on button. Do not move the tool before the completion of the calibration. The red LED light will go off once the calibration is completed.

Take note that the tool should not be placed directly under a stud, a dense object, or on a newly painted wall during calibration, as this will cause it to not calibrate properly.

Can You Use A Smart Phone As A Stud Finder?

With the development of technology, there is an app for almost anything. The apps use the phone’s capability to detect metals. There are apps on Google Play and AppStore that you can use as stud finders. The catch is that they may not be as accurate as the real deal. 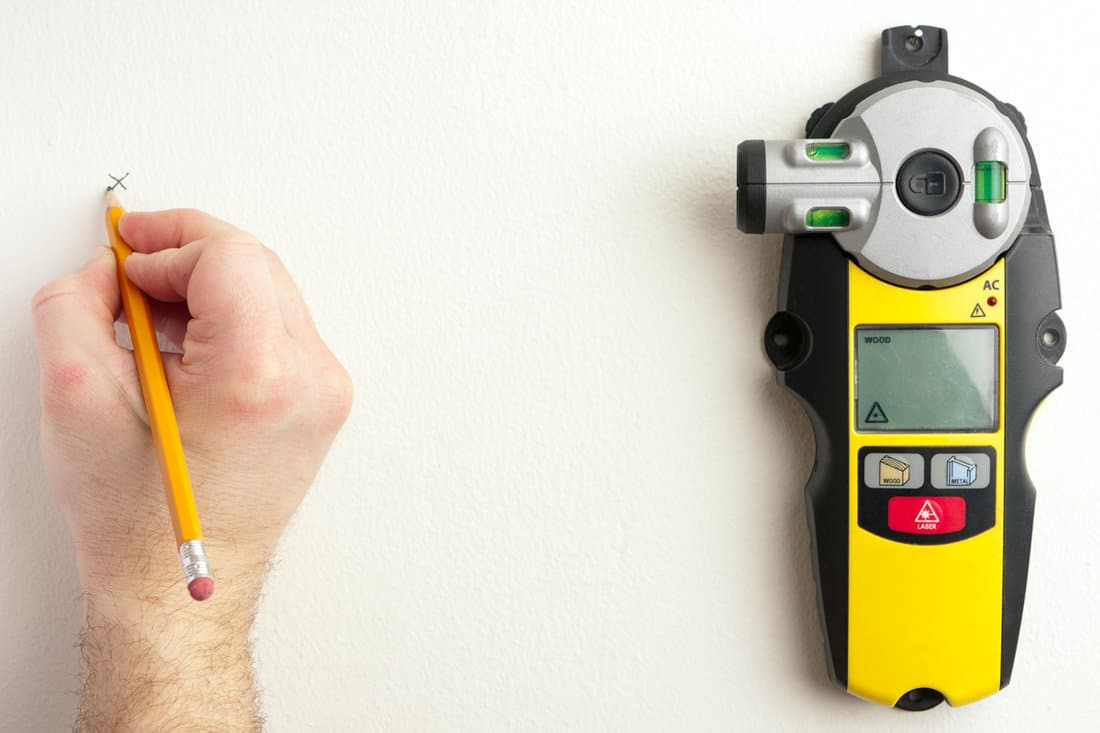 To properly find studs, make sure you use the stud finder on surfaces that it can scan through. Stud finders are not especially effective on dense walls and drywall with static charges.

Overall, if you follow the steps provided for using a Stanley stud finder, you will be able to locate wall studs and even live wires effectively.

If you found this article helpful, be sure to check out these related posts too:

How To Hang A Heavy Mirror On Drywall