Lights are one of the most important electrical components of our homes. We use them for utility, and for beauty. You can light up our office for focused productivity with bright lights and we can set a moody scene in our dining room for a romantic dinner. We generally think that lamps are pretty green in terms of electricity usage. For the most part, that’s true. But you may wonder, do lamps use electricity even when they're turned off?

Most lamps do use a tiny amount of electricity when plugged in and turned off. Almost all electrical components run in some form of standby mode and leech out small amounts of electricity. Lamps use very little because they have no computer parts or batteries. The switches need to remain charged to be turned on the next time you want to turn the lights on, and that is where the small amount of standby drain comes from. 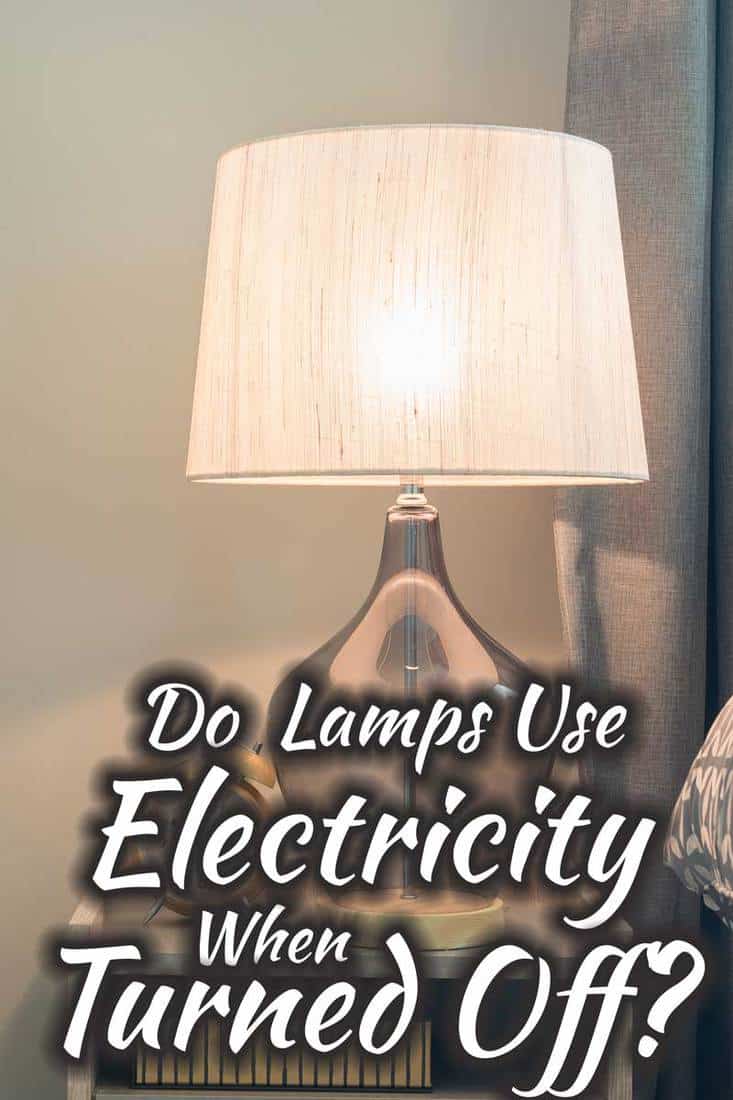 This may come as a surprise to you. After all, it's easy to imagine that the “off” switch really means what it says. There are different ways that electronics act when plugged in and turned off, and several factors that determine how much electricity they use. Read on to learn more about this, and some ways to help prevent excessive standby drain.

Why Do Lamps Still Use Electricity When Turned Off?

Most lamps use what’s called a soft “on” and “off” switch. This means that the electricity is not directly cut off from the light bulb, but instead, that the switch actively controls whether electricity goes through it or not. This would mean that a tiny current would always need to pass through, thus causing some electricity to drain. Many people call this phenomenon in home appliances “Vampire drain” and in some cases, it can account for up to 10% of household energy spending.

How Much Energy Does a Lamp Use When It Is Plugged in But Turned Off?

Lamps in particular use very little standby energy if any. Some lamps are designed with this in mind and feature a hard switch that directly severs the electrical line to the bulb. There are some devices that never really power down all the way though, and the power they consume while off is almost the same!

Do All Electronics Use Electricity When Plugged In But Turned Off?

Almost all household appliances, chargers, and electronics use electricity even when turned off. Chargers for cellphones and laptops that have an external power converter are among the worse offenders. They use almost the same amount of power even when nothing is plugged in!

Televisions also use electricity constantly in standby mode for several reasons. One of them is that the receiver needs to constantly be checking for input from the remote control. A coffee maker that can be scheduled, for example, has to run the clock to determine when the time has come to start heating up. Cable boxes have been shown to use almost identical amounts of electricity when recording live TV as when they are in standby mode with the television off.

Basically, anything that is plugged in and has an LCD panel, light, receiver, power adapter, or clock is always drawing some level of electricity.

How Can You Find Out How Much Electricity is Being Used by a Household Appliance When It’s Turned Off?

There are several sensors you can find online to plug into an outlet that will determine how much energy flows through it. You then plug your device into the sensor and it acts as a sort of intelligent power strip. You can monitor the current for a set number of hours and find out if and how much your appliance is draining.

This device, called a Kill-a-Watt can be used to find out just how much your appliances are costing you in standby mode.

You can find this product here on Amazon.

How Can You Prevent a Device From Drawing Standby Power?

The simplest way to prevent electrical components from draining electricity while turned off is to unplug them. Though it can be a hassle at times, simply reaching out and unplugging a high-drainage device before a long period of not using it can help lower your overall electrical usage. Things like gaming consoles, televisions, and computer monitors can be turned off when you know you’ll be away from home for a while and make a big difference.

You can also connect several appliances to one power strip and turn the master “off” switch. This will cut the electricity being fed to each outlet on the strip. There is no way for devices to continue running on standby if not current is allowed to reach them.

You can find this product here on Amazon.

Some devices use such little power on standby that it’s hardly worth the effort to manually unplug them. Lamps fit into this category and its usually best to just leave them plugged in.

Inform Yourself And Do What You Think is Right.

Lamps drain such little power, it is not useful to micromanage when they are plugged in or not. The most important thing to know is which are the most power-hungry standby devices ad manage those. Watching your overall energy use can help lessen your impact on the environment and lower your energy bill costs!

lamps use Zero electricity if turned off. unless they have remote or touch sensitive switch. on/ off switches disconnect the electrical path.