When doing a project with wood, it is essential to consider what materials you should use. After all, they all have their specific purpose. So, that begs the question, should you nail or screw wood together? If you would like to know the answer and why it is, let's find out!

Whether you should nail or screw wood together depends on the situation. Screws have a superior grip on the wood. On the other hand, nails have greater shear strength. In other words, you can use either fastener, but the project you are working on will influence which you should use.

Now, you may ask, what are grip strength and shear strength? How important are they to holding pieces of wood together? Lastly, what situations will warrant one over the other? If you would like to know this and more, keep reading ahead. 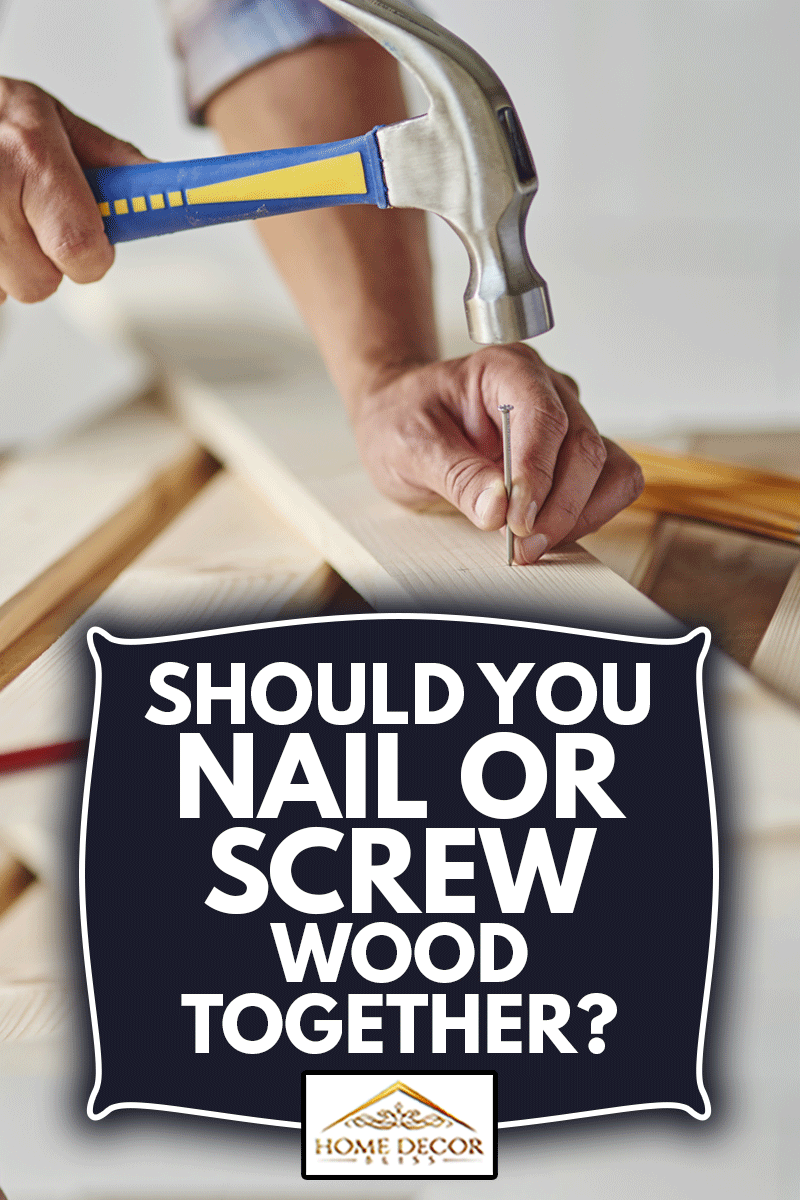 The Difference Between A Nail And A Screw

So, what is the difference between the two? The first indication of their differences is their design. Take a closer look at a nail and screw. You will find a spiral in the screw.

Why does that spiral matter? It is an indication of its purpose. That spiral that you see is also called the thread. When you use it on wood, it turns and pulls two pieces of wood together. However, that is not the only essential part of the screw.

The shank is the smooth surface above the thread. It is an essential part that is in charge of heat dispersion. Therefore, it allows for a firm hold without having the screw break.

The purpose of its design is to hold two pieces of wood together. Therefore, we can conclude that it has better grip (tensile) strength than a nail. What we mean by grip strength is the fastener's ability to hold in wood.

To paint a better picture, think of a wooden deck. There is heavy traffic most of the time. That traffic brings vertical pressure on the boards. A screw's job in this situation is to prevent the wood boards from detaching from one another.

Since you have a spiral to fasten the wood together, it will hold well under vertical force. It would have to be spun out of the wood to take apart the wooden boards.

We will develop the wooden deck idea further. Nails are also an essential contributor to maintaining a deck's structure. As you can see, they lack a thread (spiral). If it was in charge of withstanding vertical force, it would not do as great of a job as a screw would.

So, what is its purpose? This situation is where the term shear strength comes into play. Shear strength refers to how much force a fastener can hold from the sides. A nail's strong point comes from its elasticity.

When horizontal force is applied, the nail will bend to accommodate for it. In this case, screws have little shear strength. They are too brittle to handle pressure from the sides.

When To Use One Over The Other

So, the answer to whether you should use a nail or screw for wood is dependent on the situation. One fastener is better suited for a job than the other. Additionally, this answer means that you will have projects that may require both! So, let us take a look at when you should use either.

Here are some situations where it is better to use a nail:

Now, here are situations where a screw would be the better choice:

Which Is More Efficient In Holding Wood: Screw Or Nail?

If holding in wood is what your project will need, screws are a great starter choice. In general, if the woodwork will have gravity as the force bearing down on it, screws should be your go-to choice. Additionally, some suggest screws are great for temporary jobs. The reason being that they are easy to remove once you no longer need them in the structure.

For pressure on the sides, nails are preferential for holding wood. In this situation, due to how brittle screws are, they will easily snap. Nails have superior shear strength. Once it meets force from the sides, it bends slightly to accommodate for it. Additionally, it will not break if it has to readjust.

Why Do Carpenters Prefer Screws As Compared To Nails? 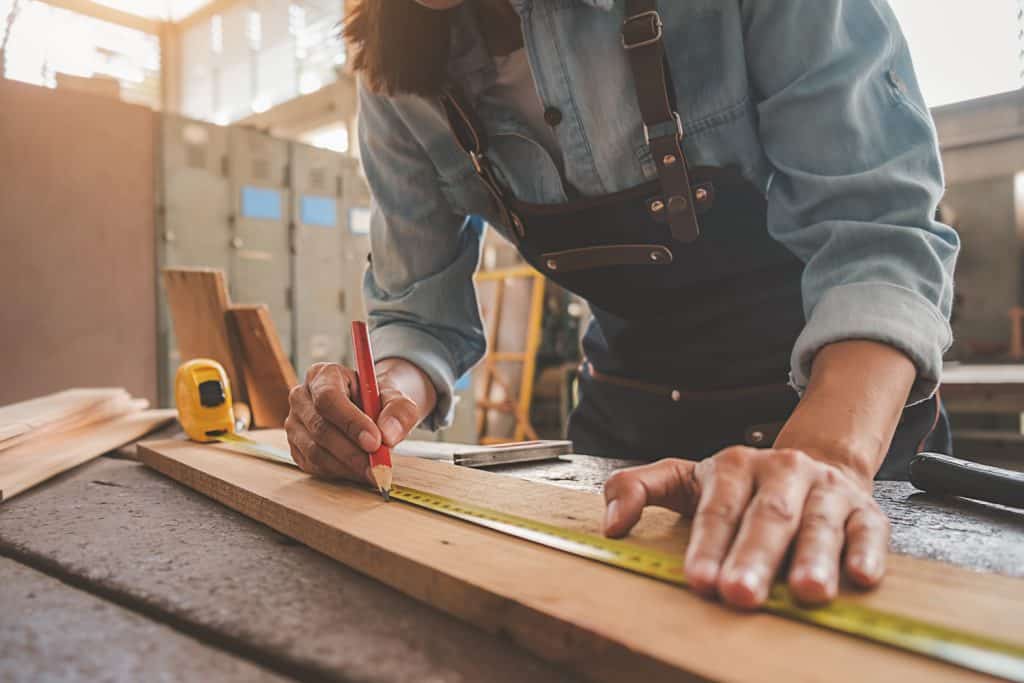 Carpenters use screws over nails because of their grip strength. It is also known as tensile strength. As users suggest, a screw's threads make it harder for it to dislodge. A nail's lack of threading makes it harder for it to hold onto the wood. It is especially the case once it begins to rust.

Should Subfloor Be Screwed Or Nailed?

The answer to this question is open to interpretation. Many home DIYers are up in a battle over which fastener is better than the other. If you want to do quick work, nails are the better option. Economically, nails cost less than a sturdy set of screws.

However, it does come at a slight disadvantage! As some report, nails tend to squeak because of their elastic nature. Over time, nails and the subfloor will get weaker in the high traffic areas. The unfastened spots will produce a squeaky noise.

So, does that make screws better? To some, it does! Since screws have superior grip strength, they hold down plywood tighter. The tightness helps glue spread out, resulting in a better bond.

Additionally, since it has a firm grip on the wood, it will not produce squeaks. In the end, a screw's potential to hold the subfloor joints firmly gives it little room to shift or loosen over time. Though, others seem to suggest that you should go with a professional's opinion.

It all depends on your situation, which fastener you prefer, and your budget. Either will work fine. But, each fastener does have an advantage over the other.

Why Would You Use Nails Instead Of Screws?

As mentioned in previous sections, nails tend to be the economical choice. They are less pricey than screws. However, if you want decent stainless steel nails, they will run your wallet slightly more.

In terms of building sense, nails are the preferential choice for structural joining. So, for instance, framing walls will use nails instead of screws. Additionally, you can use them for installing hardwood flooring.

Another example in which you can use nails is in installing the subflooring. As you may already know, floors can go through many temperature changes throughout the seasons. So, naturally, the material in the subflooring will contract and expand. This process means it will face side-to-side pressures.

In this case, nails are a better choice over screws. Though, you will have to put up with squeaking whenever the nail shifts.

Is It Better To Use Nails Or Screws When Framing?

It depends on what you are framing. For smaller projects, screws will do fine. However, larger projects will require tensile strength. Again, a screw will do fine for framing. But, you will have to use screws acknowledging that it could snap in the future.

In that sense, nails are the better overall choice for framing projects. Though, not all nails are the same. You will have to determine what nail is best suited for your needs. In general, there will be two types that you will need for framing. They are:

16D nails come with an epoxy or vinyl coating for easy installation. In addition, they also have a textured head to prevent slippage of the hammer. For more information on this topic, check out our post here. 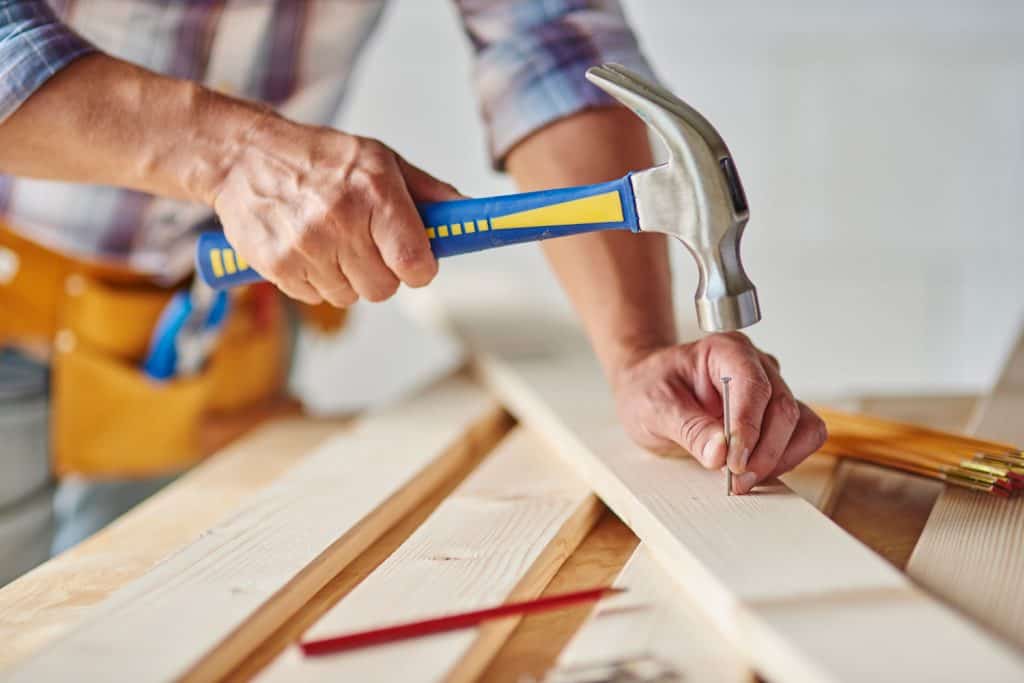 Dealing with construction requires a lot of knowledge. While a screw and nail both have a job as a fastener, they have advantages over the other. It is essential to familiarize yourself with what they offer so your projects will not succumb to pressure quickly. We hope you found the information above insightful and informative.

Before you go, do you have other nail concerns? Do you want to know how to remove nails from woodwork without damaging the wood? We have the answer! For more information, check out our post here. Until next time!