Figuring out the best way to design a bathroom isn't always as easy as you'd think. Do you want to install a gorgeous Roman bathtub but have no idea what size it should be? What about the faucet? Is there a specific vibe you want your new tub to have?

Well, we've done plenty of research into these luxurious bathtubs and have some ideas to share.

Whether you're looking for something opulent, traditional, or modern, your bathroom needs to be cohesive. Roman bathtubs tend to have an over-the-top look, so they're certainly a conversation starter.

Therefore, you want to choose the right faucets, design, and size for your space so everything looks well-designed. You also want to decide where your Roman tub will be, as it takes up a lot of room.

As we begin this article, we will answer all these questions and show you our top Roman bathtub concepts. If you're thinking about remodeling, building a home from the ground up, or need inspiration for down the road, we're here to assist.

With that said, let's dive right into this topic below!

How Big Is A Roman Bath Tub? 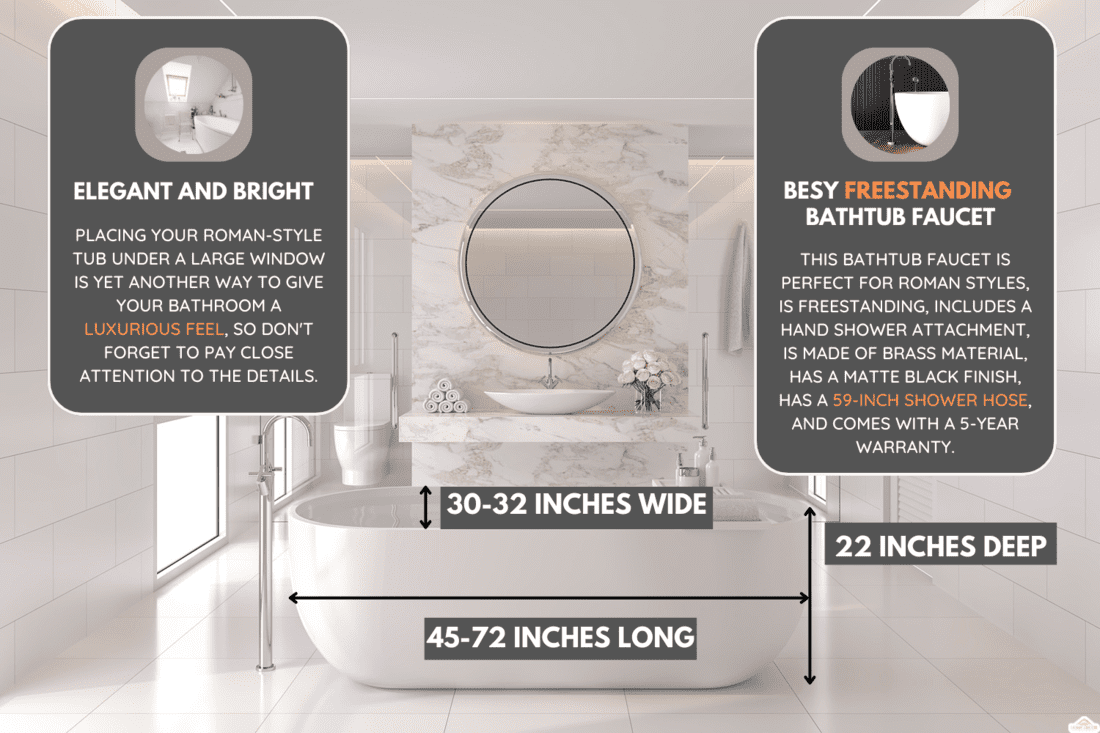 In general, a Roman bathtub will measure 45-72 inches long and roughly 30-32 inches wide. Since these tubs have a grander look than standard models, it's safe to say they'll take up more room.

On top of the above measurements, a Roman-style tub should also be around 22 inches deep. The history of this bathtub is that it was created for soaking, so when you're inside, you should be able to soak up to your chin.

Of course, if you're very tall, you may need to choose a slightly deeper model, but that shouldn't usually be an issue with this tub style.

Roman bathtubs also have jacuzzi-style options, so if you prefer bubbles while you soak, that's an even further luxury to explore. Regardless, you want to create a space to relax and unwind in.

A Roman tub is essentially a deeper, fancier bathtub than traditional options. Unlike the 2-in-1 shower and bath you see in many homes, a Roman tub is strictly for soaking.

In addition, a Roman-style bathtub will be much deeper than a standard model. As we said, you should be able to soak up to your chin comfortably in one, which screams luxury.

According to design experts, many Roman bathtubs boast majestic pipework and fine detailing, so this is certainly not an everyday fixture.

You may even notice that luxury hotels have Roman bathtubs in their suites or standard rooms, so this is a great selling point.

Furthermore, a Roman-style bathtub will have a larger faucet (or multiple) than a regular bathtub, allowing it to fill faster and rinse more of your body.

What Are Some Ideas For Roman Bath Tubs? [With Faucet Inspiration]

If you want to install a Roman bathtub in your home, there are endless designs to choose from.

Whether you want something sleek, modern, traditional, or over the top, a Roman tub should check off these boxes. With that said, let's show you some of our favorites: 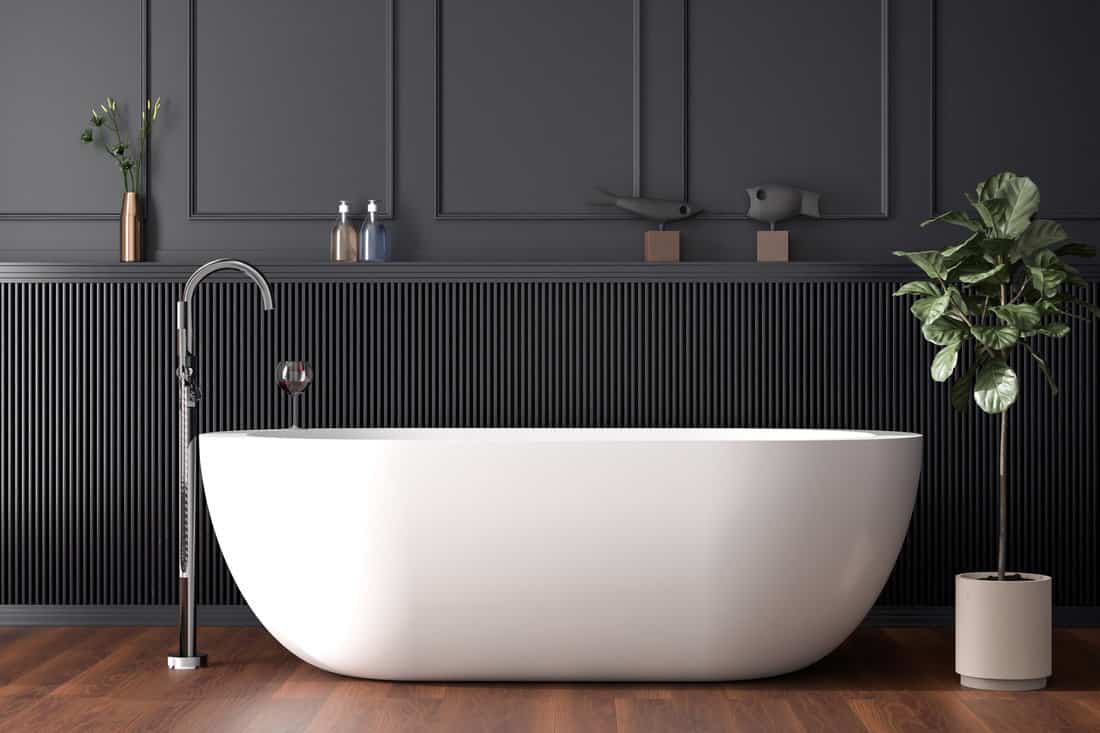 First, we have a pretty simple Roman bathtub that is perfect for any space. As we said, Roman-style tubs already have a stunning appearance, so you don't always have to go crazy with the details.

Here, you can see how the design is white and basic, paired with a tall black faucet and hand shower. Another thing to consider for your bathroom is adding a hand shower attachment, so you can rinse off while soaking.

The black and white contrast each other nicely in this bathroom and will also be a great pairing in your house. For your tub, you may even want to have it high-gloss, which will be easy to clean and look a bit more exciting.

This bathtub faucet is perfect for Roman styles, is freestanding, includes a hand shower attachment, is made of brass material, has a matte black finish, has a 59-inch shower hose, and comes with a 5-year warranty.

Check out this faucet on Amazon here. 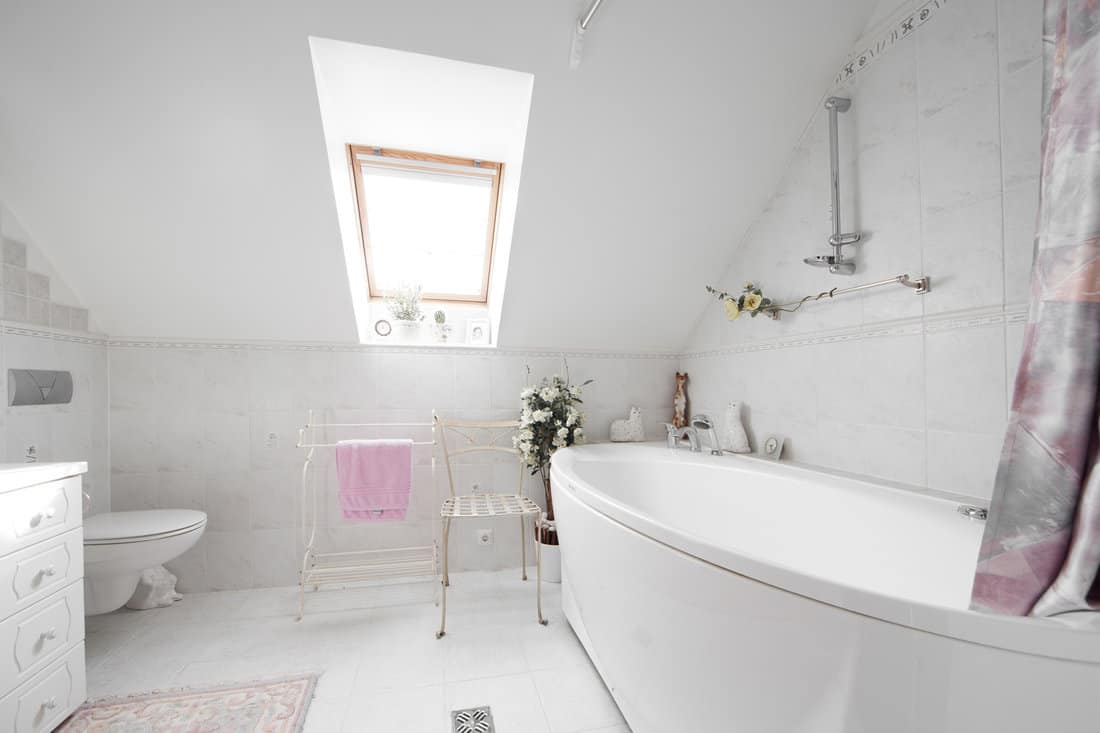 Another idea for your Roman bathtub is following a more elegant and traditional design. In this room, you can see the bathtub's built-in design, giving it an even more prominent appearance.

The stunning marble backing to this tub enclosure seals the deal and reflects plenty of light.

Placing your Roman-style tub under a large window is yet another way to give your bathroom a luxurious feel, so don't forget to pay close attention to the details.

This tub has a traditional silver design for the faucet, which works nicely for the space. It's not too modern, but it certainly fits the aesthetic of this bathroom.

This traditional-looking bathtub faucet has a chrome/silver finish, is made of brass material, features a hand shower attachment, promises better water flow, works for freestanding tubs, and comes in various colors.

Built Into The Ground

This Roman tub idea is one of the more eccentric options of the bunch. As we said, Roman-style tubs tend to have a lavish vibe, so why not build one into the ground?

In this bathroom, you can see how the bathtub features a stunning tile enclosure, which gives it that elevated feeling.

Additionally, the optional shower attachment above the tub is perfect for anyone wanting to rinse off before soaking, which is a great detail.

Again, this is another silver faucet/fixture design, so clearly, that's a popular choice.

Should My Roman Bath Tub Have A Shower Attachment? 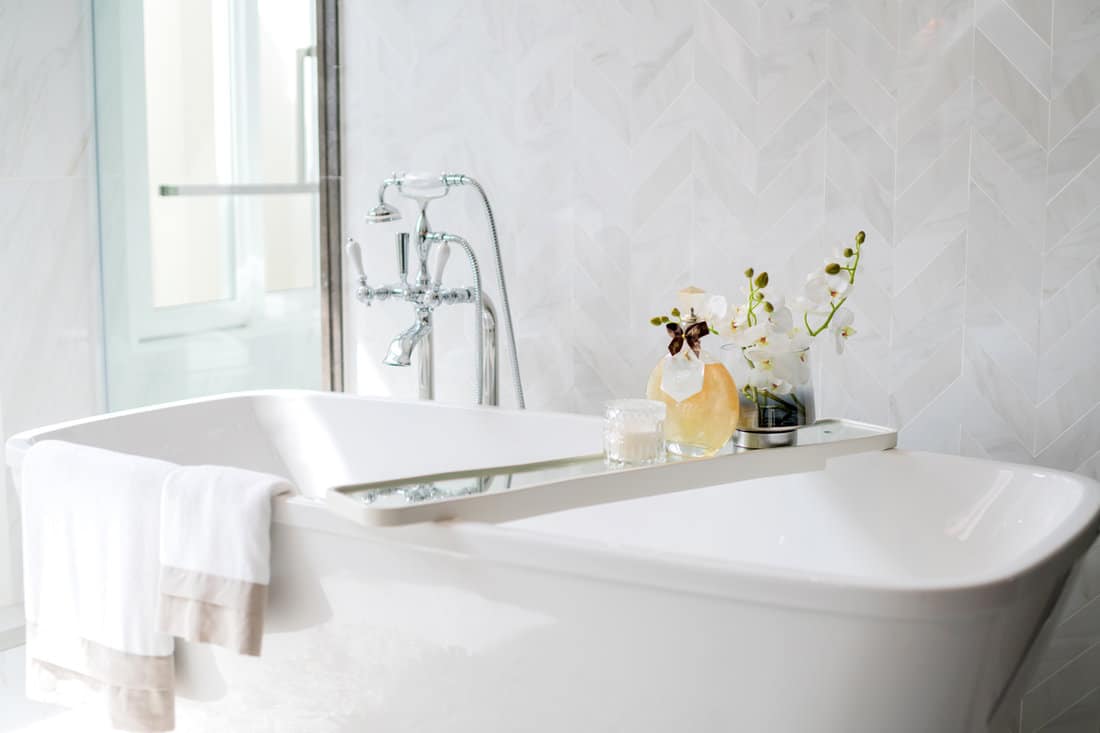 If you want to rinse off or use your Roman tub like a standard shower, we recommend purchasing a faucet kit with a handheld shower attachment.

As we covered, having that extra water source can make a massive difference in bathing and you relaxing in your Roman tub.

On top of that, you can install an above-head shower faucet to your Roman bathtub if you sometimes want to stand and clean yourself.

This is a viable option with a built-in tub, so that's one more detail to consider. You want to create a functional yet aesthetically pleasing space to soak and rinse off, so this will be different for everyone.

Luckily, most bathtub faucet kits include a handheld shower attachment, so finding one isn't difficult.

What Is The Difference Between A Roman Tub And A Garden Tub?

On the topic of faucets, you might run into the question of whether a Roman and a Garden tub are the same things. Although they're both for soaking, a Roman tub typically has a taller faucet, as it's meant for full-body soaking and cleaning.

According to experts, you can expect a Garden-style bathtub to feature shorter spouts and less ornate detailing, but they're virtually the same in size.

You might also notice Garden tubs don't always have shower attachments like many Roman ones, so that's another detail to remember. Besides that, you won't miss out on anything.

How Much Does It Cost To Install A Roman Bath Tub? 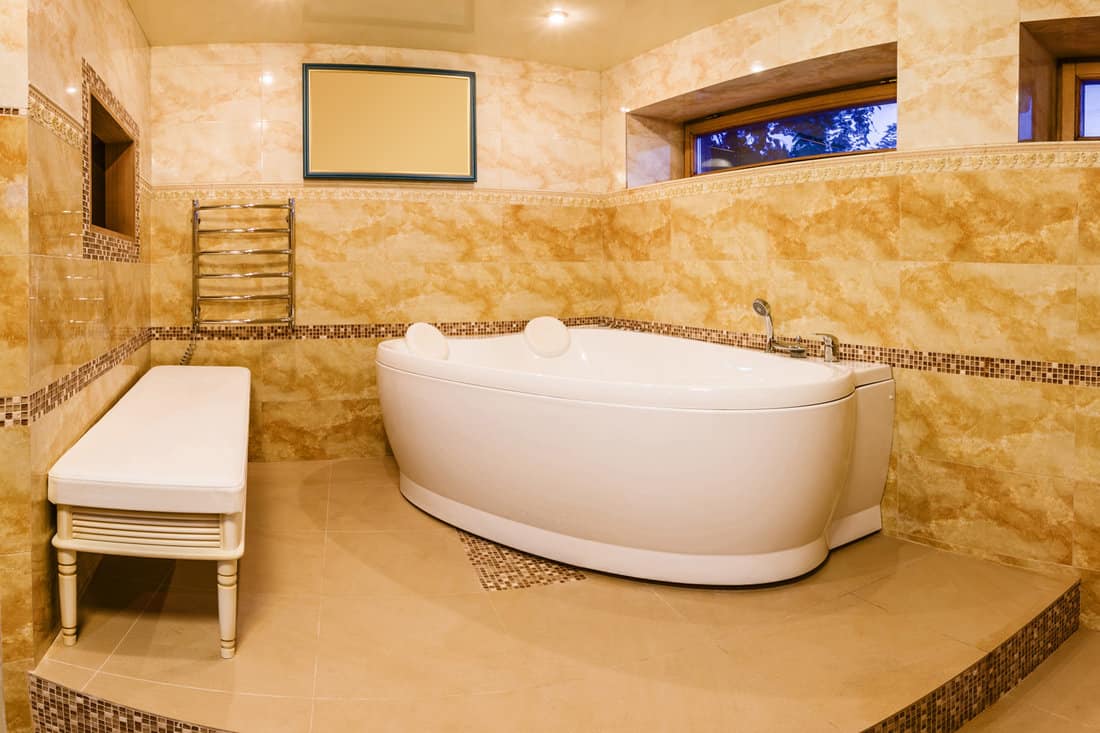 Now that you have an idea of what a Roman-style bathtub looks like and does, you need to create a budget for your project.

Generally, purchasing a Roman bathtub will set you back anywhere from $1000-$20,000, so this is a significant price point.

Unlike a regular bathtub, a Roman model will be larger and require additional setup.

Of course, you won't be spending $10,000-$20,000 for a basic Roman option, but if you want to build one into the ground or add special features, expect a higher cost.

As we said, Roman tubs are considered a luxury. Therefore, you can't usually find one for cheap and have it be as fancy as the ones you enjoy at a resort.

Labor-wise, installation for a Roman-style tub should be around $2,500, although this greatly depends on your project's size, design, and complexity.

No. A Roman bathtub shouldn't be challenging to maintain. Considering most of these are built into the ground, your Roman tub shouldn't be any more difficult to take care of than a standard model.

For your cleaning, a Roman tub should be easy to rinse off and scrub, regardless of how it's installed.

On top of that, many high-end Roman tubs feature self-cleaning features, which makes your life even easier. Of course, a tub with that type of technology will be much more than one without, but sometimes it's worth the splurge.

You also want to consider piping and how the water is supplied to your Roman bathtub. With a freestanding design, you might be able to repair your tub without cutting into any walls or flooring, so that's a good idea.

Generally, it's better to have your pipes accessible rather than hidden, as this can be a headache later.

To Finish It Up 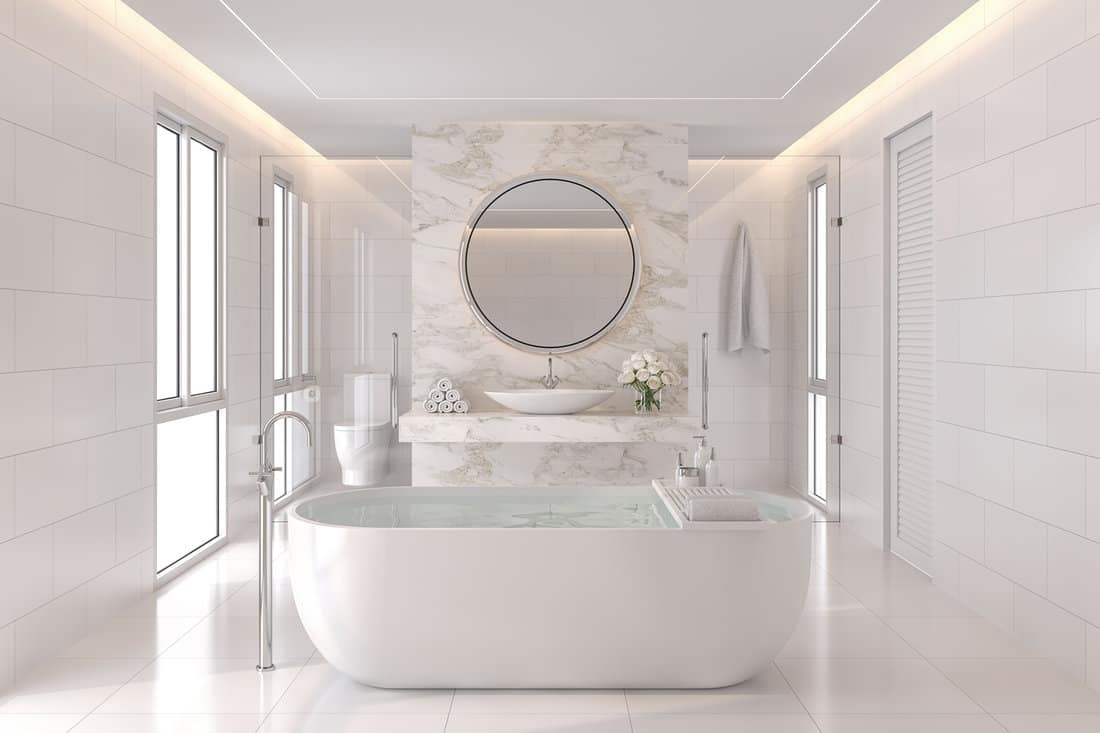 Whether you want to add a Roman tub to your bathroom or need help with the details, it's always good to create a game plan. We found that Roman bathtubs are larger, often measuring between 45 and 72 inches long and 30-32 inches wide.

When it comes to faucets, a Roman tub will have a larger spout, which can be silver, black, gold, or more of a rustic brass color. You might even want to consider purchasing a faucet kit with a shower attachment, so you can rinse off before filling the tub.

Regardless, create a space where you can relax, unwind, and enjoy a luxurious soak in your own home!

Made it to the end? Check out these other related home posts below:

How To Update An Old Jacuzzi Tub - 3 Methods To Consider

How To Extend A Bathtub Spout Pipe - 2 Methods To Try