Deciding whether to go the route of a fully tiled bathroom or a partially tiled bathroom can be stressful. Between all the different kinds of tile, paint, and possible decoration you could include in a bathroom, you want to make sure that step one, the bathroom assembly, goes well and in your favor. So should a bathroom be fully tiled or not? We have researched this to give you the most information before making this essential decision.

Here's why you should fully-tile the bathroom walls -

On the other hand, there are good arguments for keeping your bathroom walls only partially-tiled - 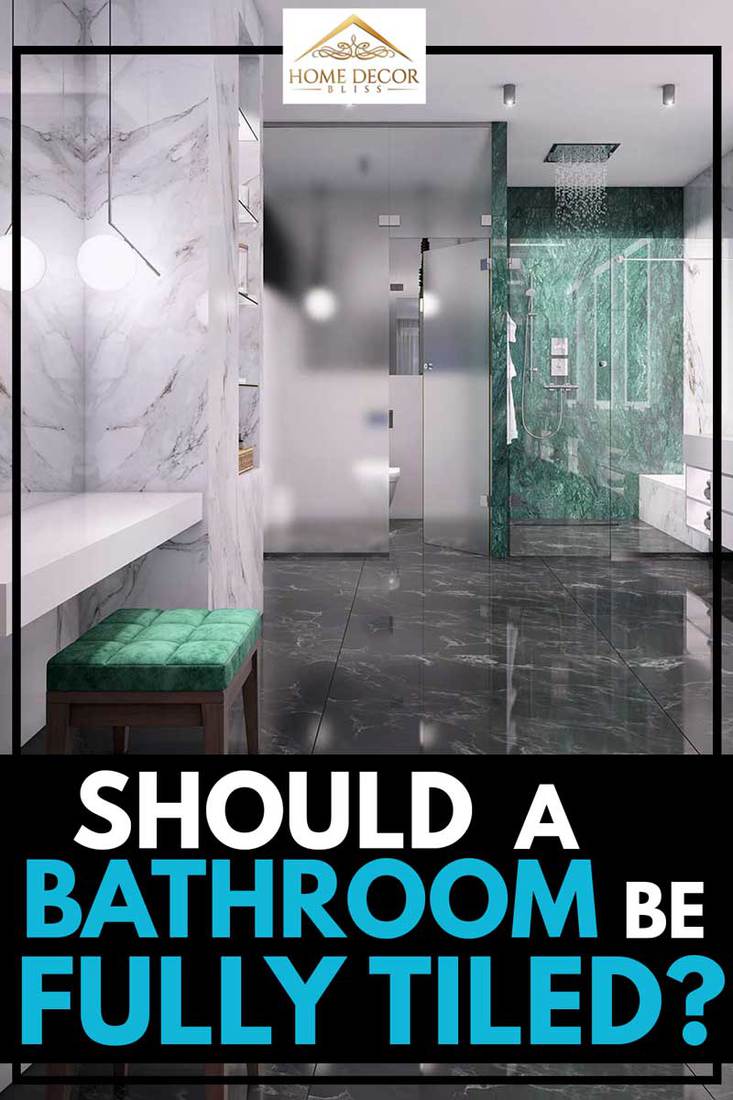 Now that you have a beginner's understanding of the different options when it comes to installing tiles in your bathroom let's go over the specifics! We've done the research and come up with several examples to help you make the decision that's best for you.

Fully tiling your bathroom is a great way to make it classy, more formal, and very clean cut. There are several different ways you can personalize with different kinds of tile. Keep in mind that if your walls are covered in tile, you may have a more difficult time doing things like hanging pictures. Tile can also crack, so if this happens, click here to find out why! 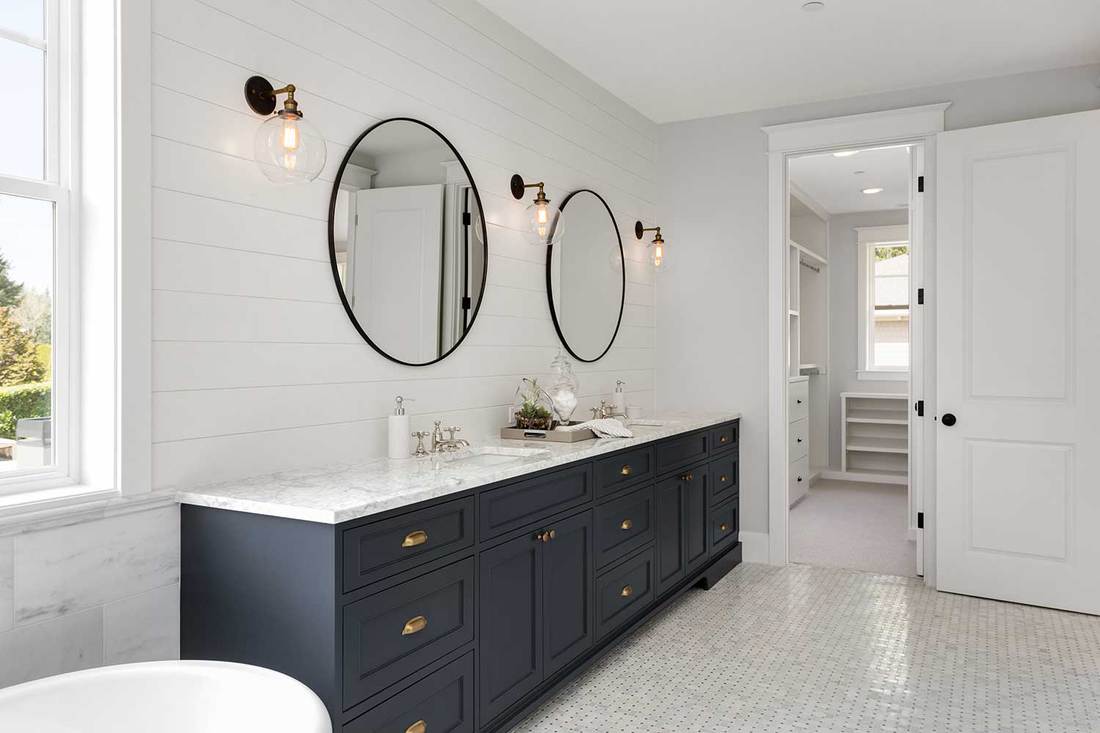 These people have cleverly utilized their choice to tile their bathroom fully and have opted to use long, horizontal tiles that give the bathroom the appearance of seeming much longer than it is. This effectively increases the amount of perceived available space.

One of the many perks of installing tile in your bathroom is the resulting light. Tile is reflective, and in this case, white tile is even more so. Tile bounces the existing light around the bathroom, making it seem both bigger and brighter than it is. 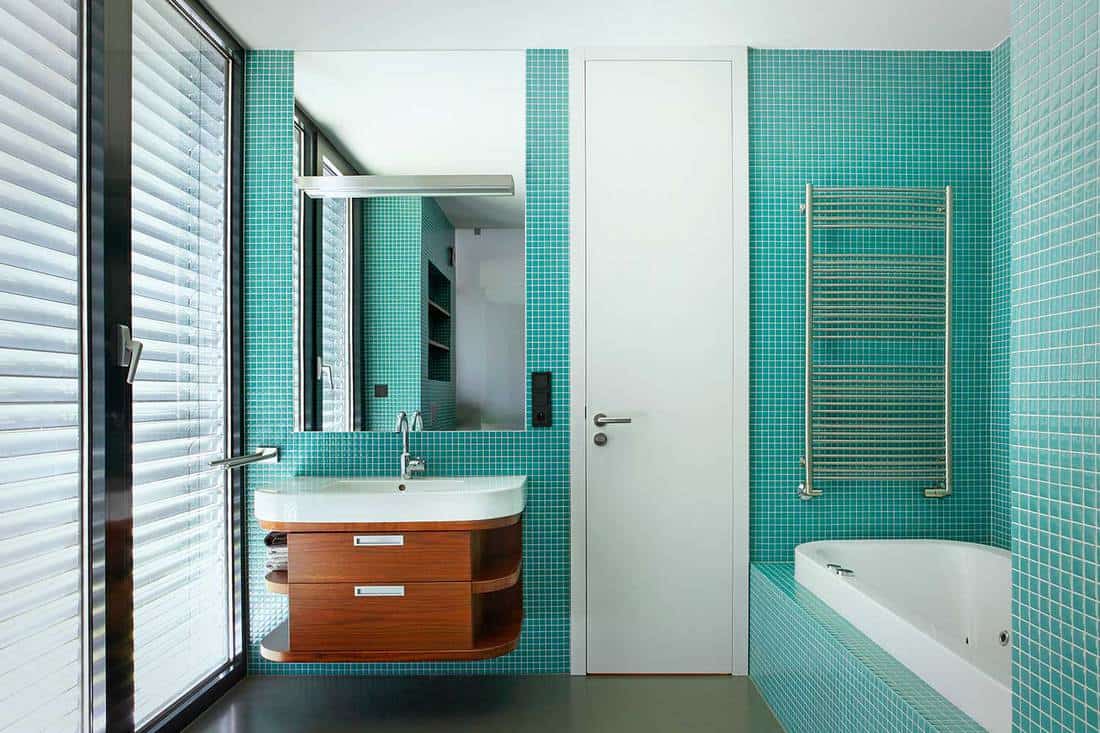 This bathroom utilizes many small blue tiles, achieving a cheery, welcoming sense of uniformity. From the ledges around the bathtub to the wood sink area and the narrowness of the door, special features in this bathroom are thrown into sharp relief.

Most bathrooms decorated in this much blue tile would be special because of the blue tile. However, because the bathroom is uniform in its complete tile job, and not done partially, the blue tile is the norm, and even though it continues to be special, it's not what sticks out. 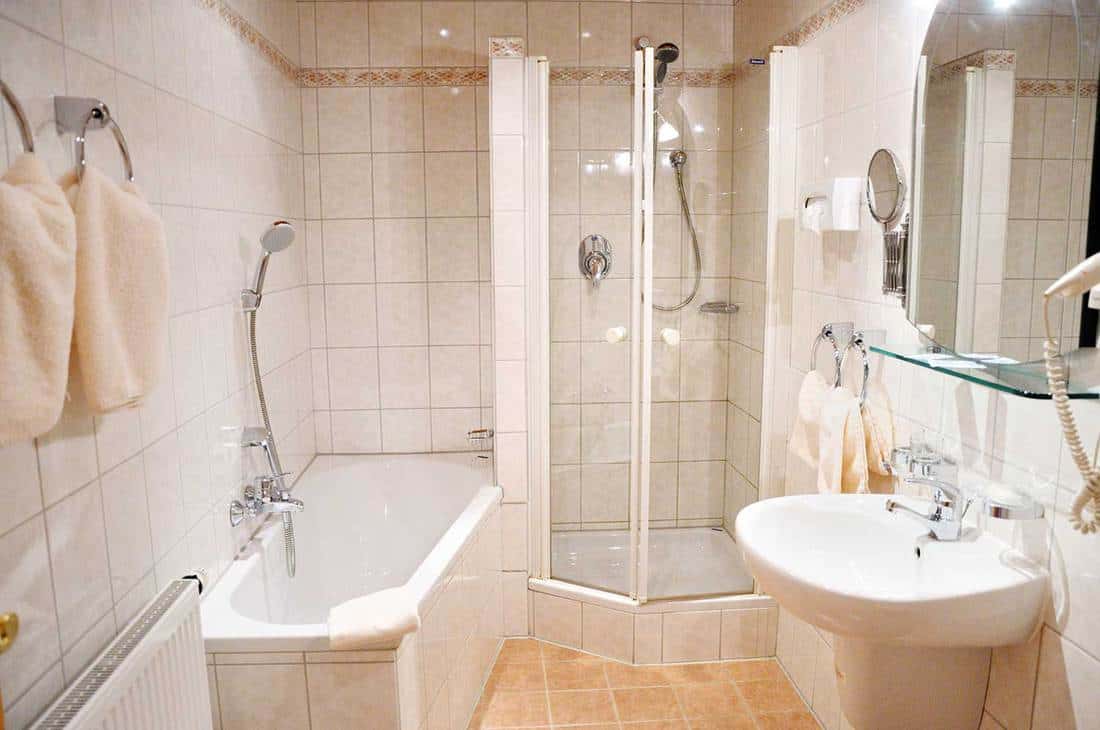 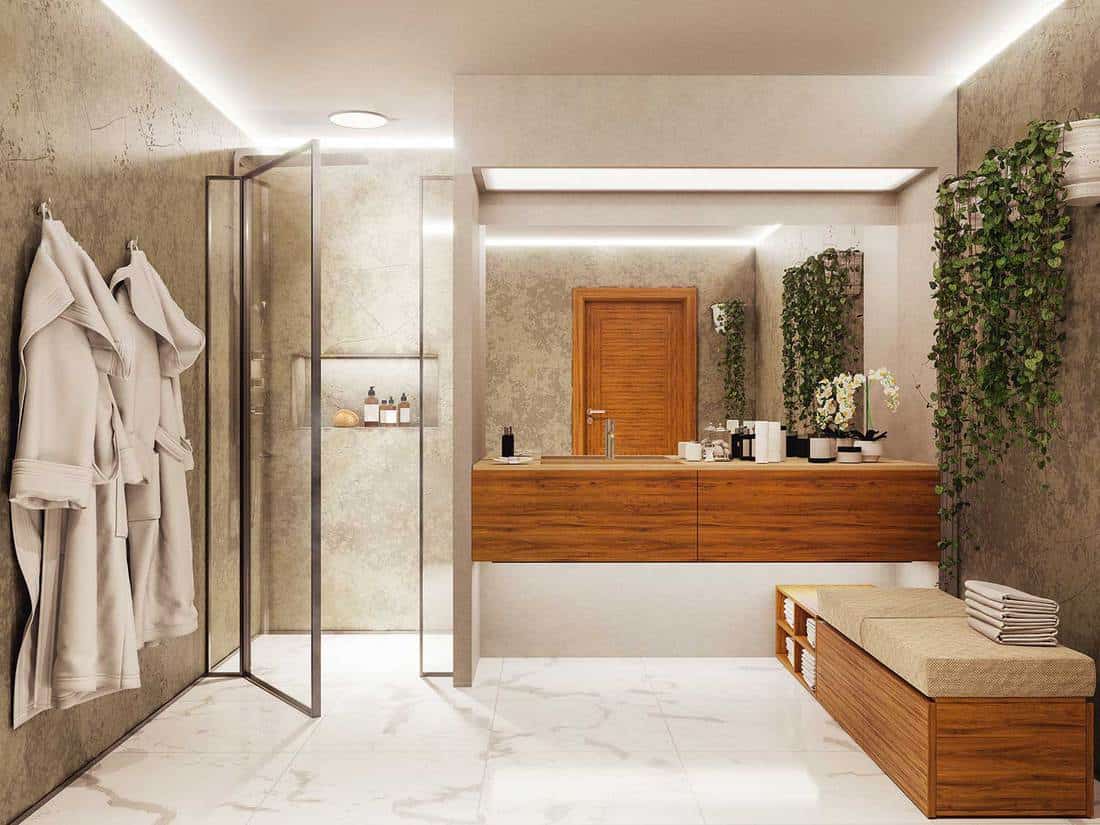 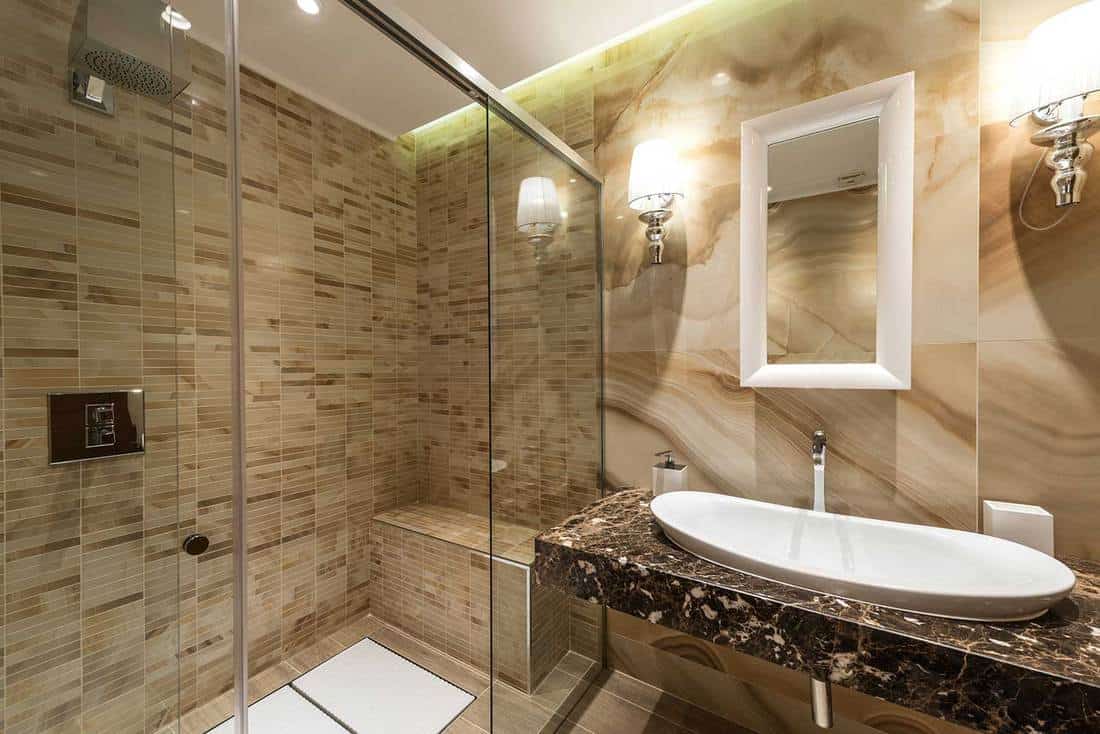 This specific design incorporates many traditionally old features as well as stereotypically new designs. The colors used here have a 70's vibe to them, as do the different tiles being used. The border between the shower and the rest of the bathroom is made clear by the differences in the tiles used, making the bathroom seem bigger by defining the different spaces. 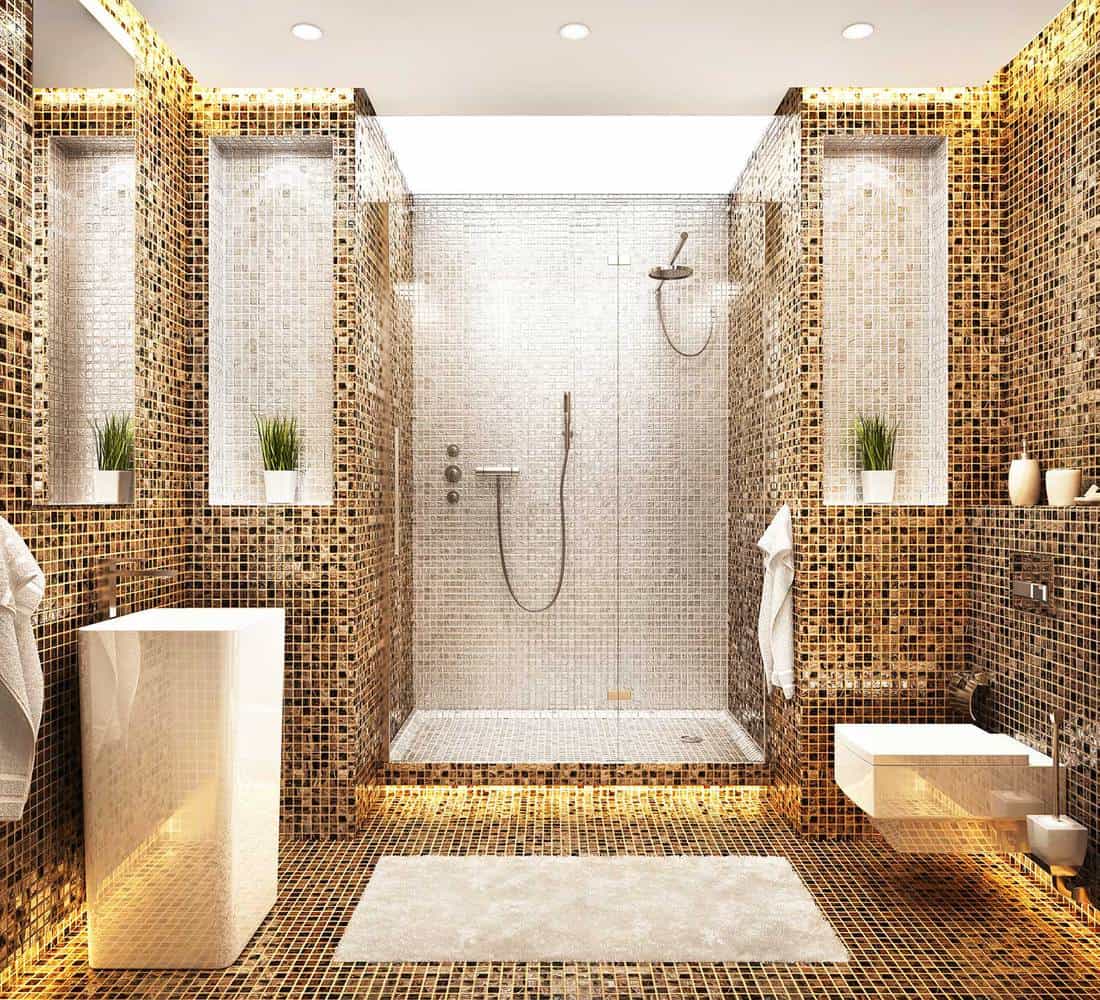 This bathroom, already decently sized, is made to look even bigger with the uniform, reflective tiling. With the selected tiles all displaying in a desert theme, non-descript white fixtures, and a few plants added for good measure, this bathroom and it's tile job come across with a very classy, but non-assuming, allure. 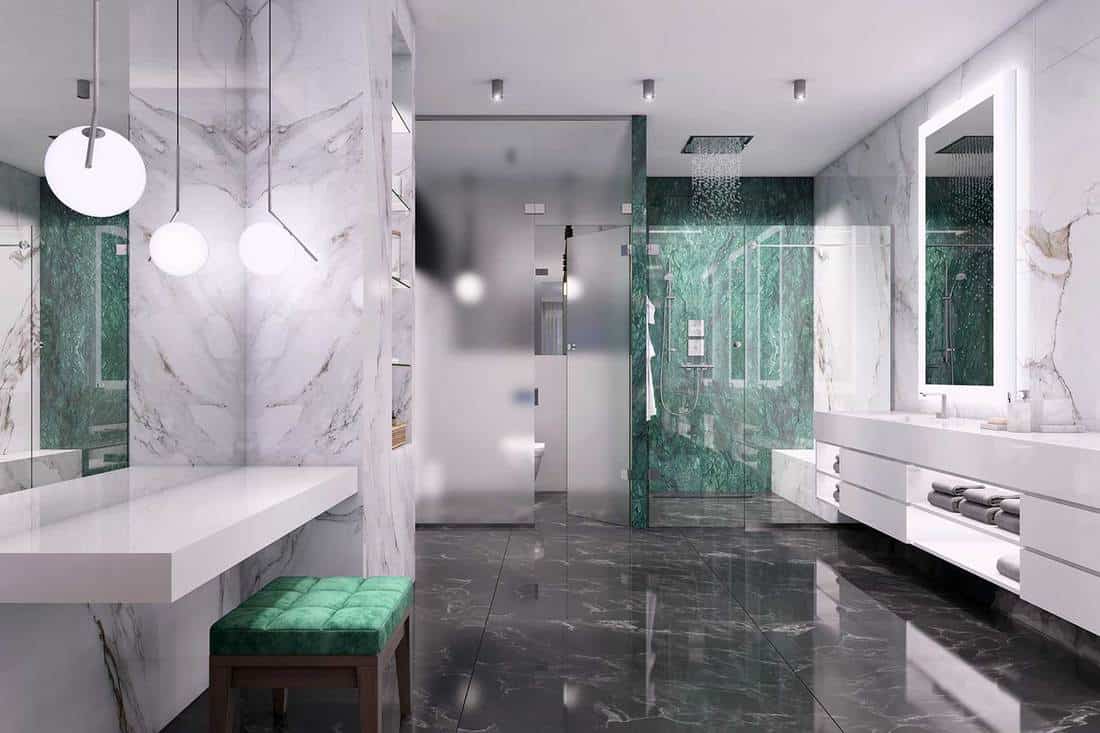 The tiling in this bathroom was very, very well done. Take a look at the floor, the walls, and the inside of the shower. They are all different colors, but the pattern is the same. The abstract marbling that is consistent in all the different areas, regardless of the base color, creates a specific cohesive effect that binds the room together. 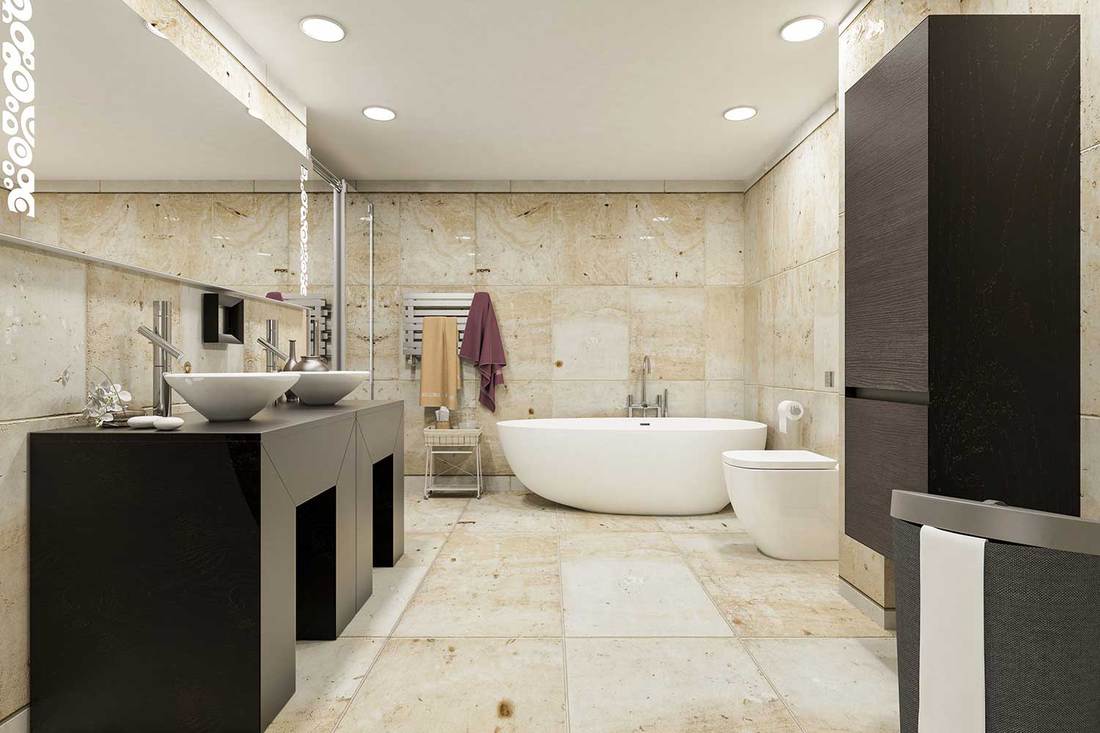 These tiles fall somewhere between a marbled style, and an aged, polished concrete look. The combination of these two styles in connection with the new furniture and modern style of the included decor gives off a very new industrial vibe.

The bathroom itself is big enough that the large tiles don't make the size bathroom seem much smaller, instead of making the bathtub, counters, and other installments seem smaller, which in turn, makes the bathroom look bigger. 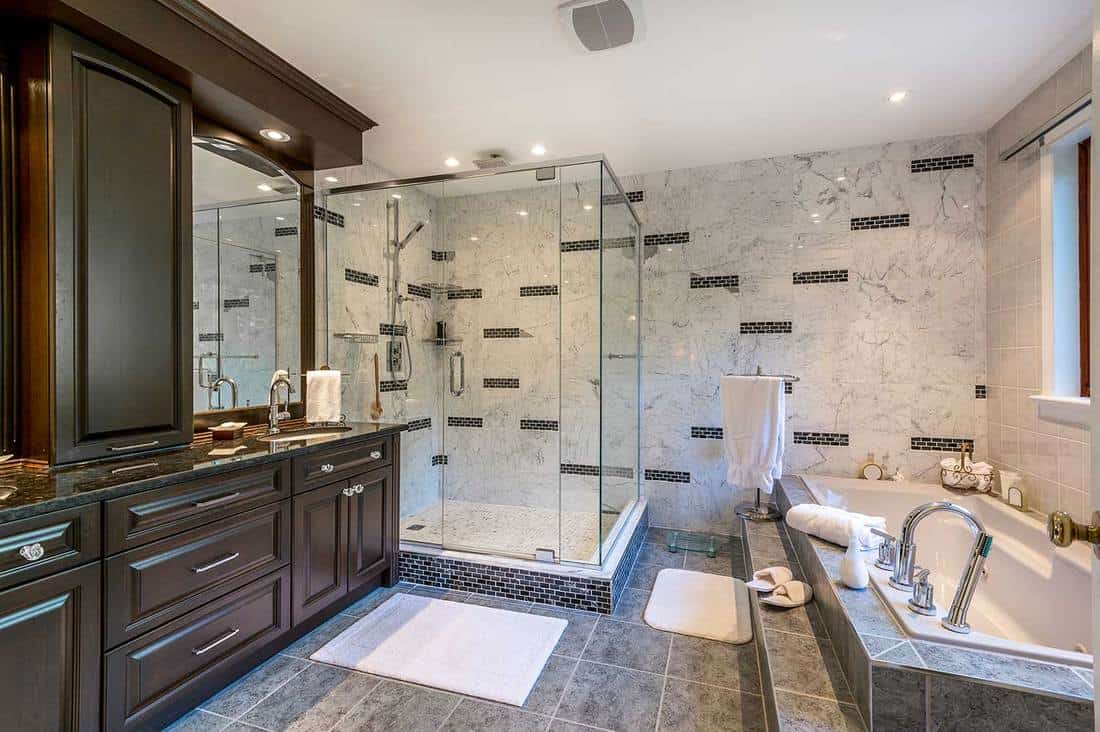 While there is a lot to be said for separating the different spaces that have different uses, choosing to have a more seamless look is something that can be pulled off very well. For example, the entire wall behind the shower and the tub is the same, creating a more open feel than would exist if different styles of tile were used to separate the spaces. 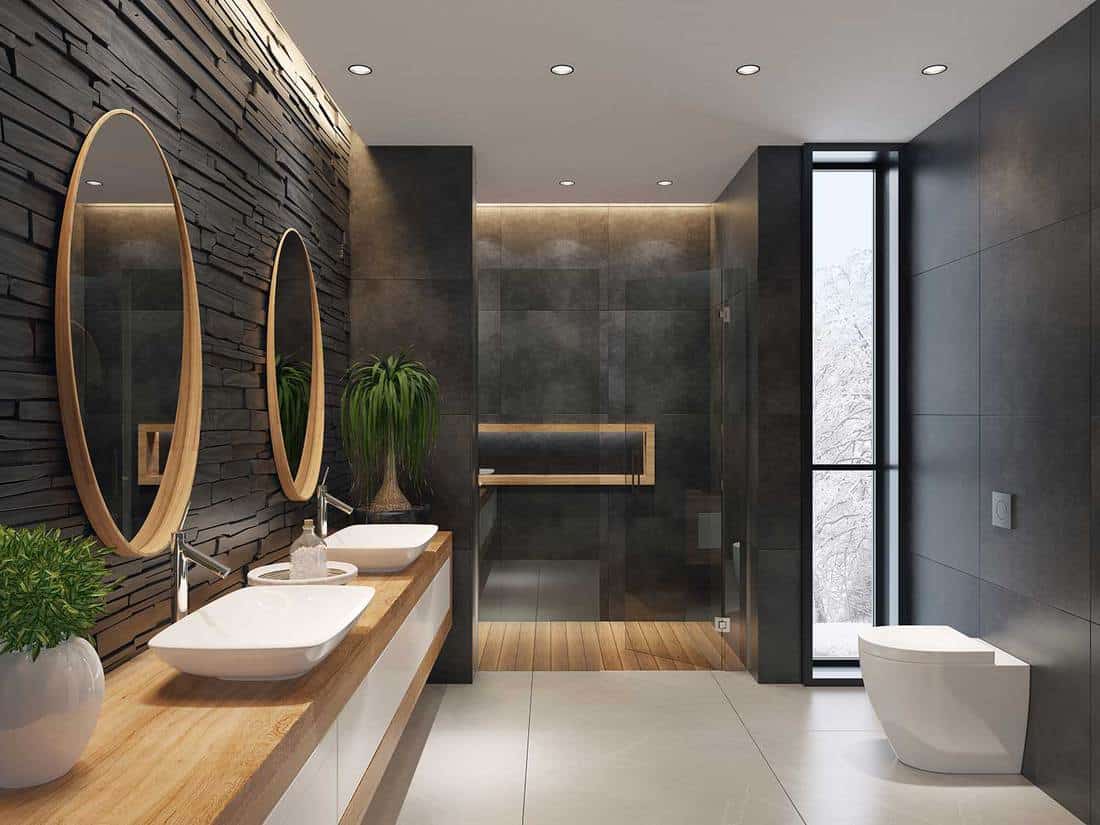 Contrast is a very desirable quality when it comes to decor, and not just because of the different colors you can include in a design. Contrast can be achieved in several different ways, from color selection to texture placement.

This bathroom uses an uneven pattern of textured tiles behind the sink, which not only contrasts the smooth mirror and countertop but the floors and walls as well, which creates a "natural vs. industrial" effect. 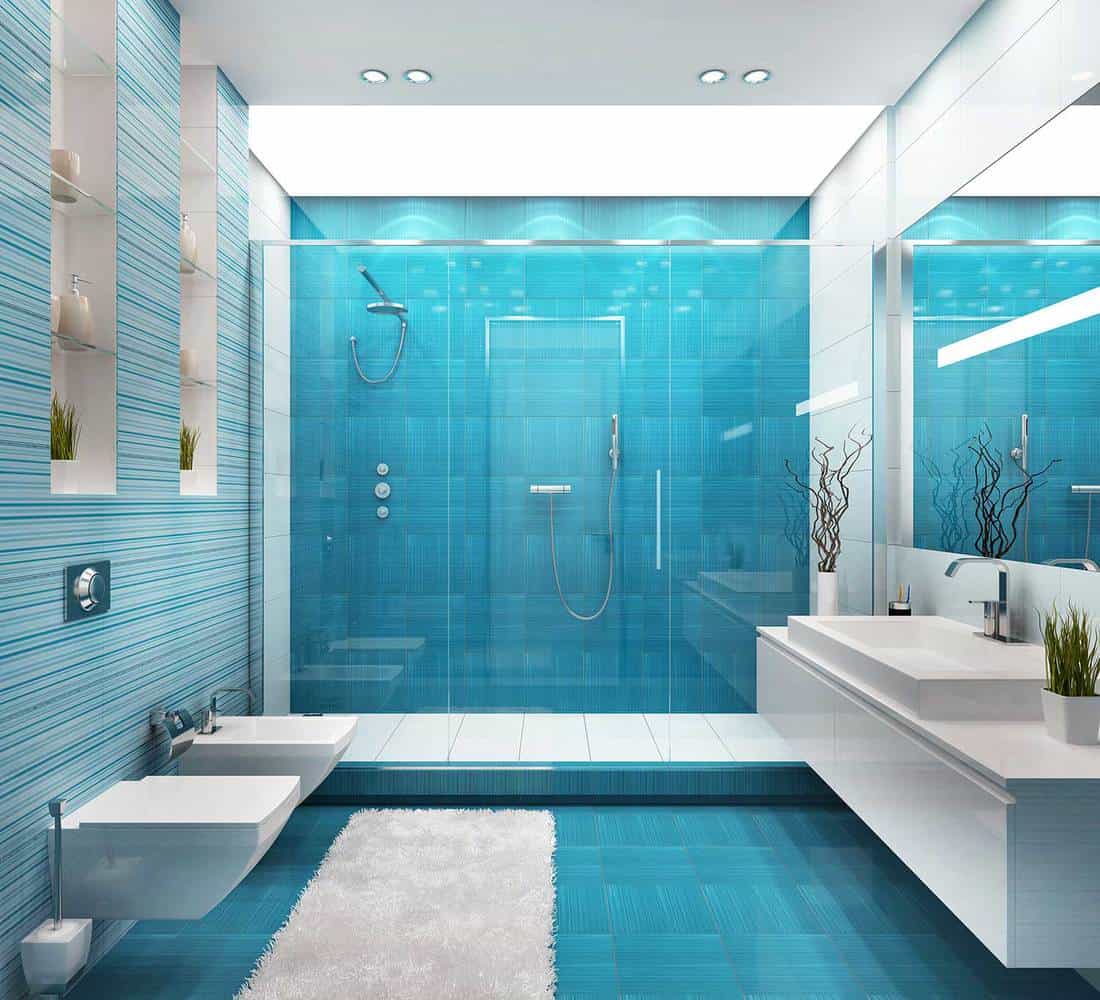 The tiles in this room have wonderful similarities without coating the room in repetitive patterns. The tiles on the back wall behind the toilet are comprised of stripes that contain all the colors that are used in the bathroom. The tiles on the floor and in the shower, though more solid in color, are faintly striped, giving contour and texture to the room.

A partially tiled bathroom gives a lot more room for decorating, personalization, and customization. Once you throw paint into the mix and add wall hangings and fixtures, you have a large number of ways in which to make your space your own. For example, click here to look at beach-themed tiles that could be a great addition to your bathroom! 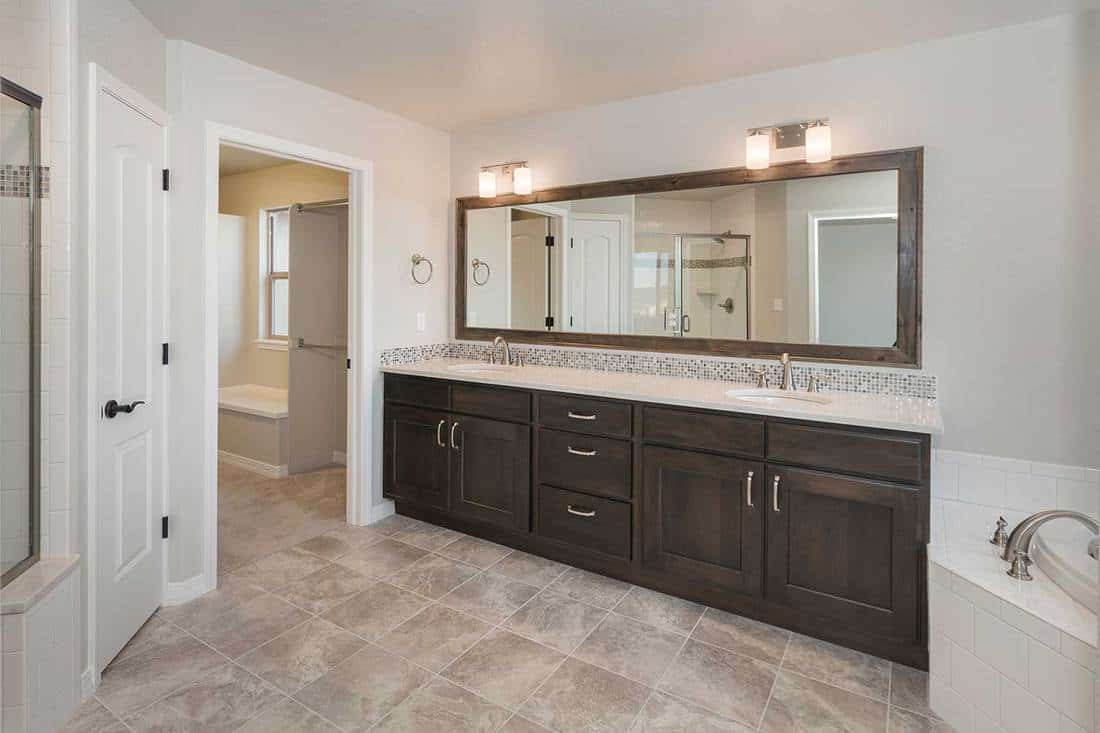 This bathroom contains minimal tile, installed only in the splash zones above the sink and above the tub. It is worth noting that there is also tile installed on the body of the tub itself, making for a very cohesive unit, and a very defined bathing area. 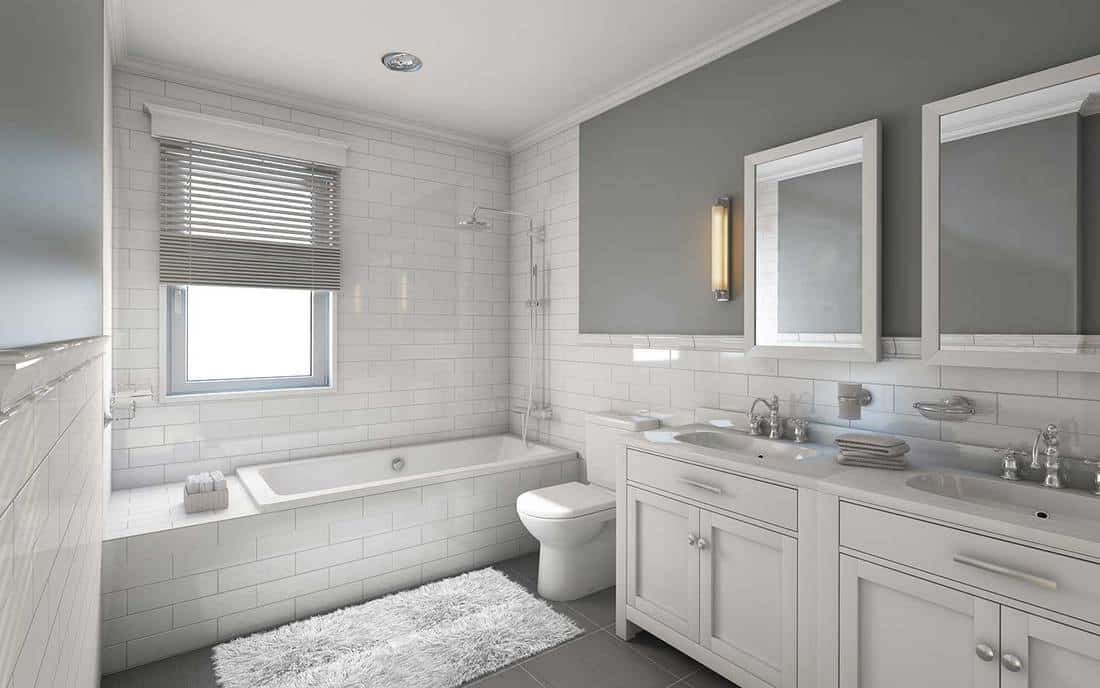 The colors and shapes of the tiles you use will have a tremendous impact on the aesthetic of the bathroom as a whole. For example, this bathroom is all white and utilizes very long, horizontal, and reflective tiles. The effect is an immaculate, well-lit bathroom that gives the appearance of being larger than it actually is.

The long tiles draw the eye sideways instead of up and making everything look longer, contributing to the idea that the bathroom has more space than it does. 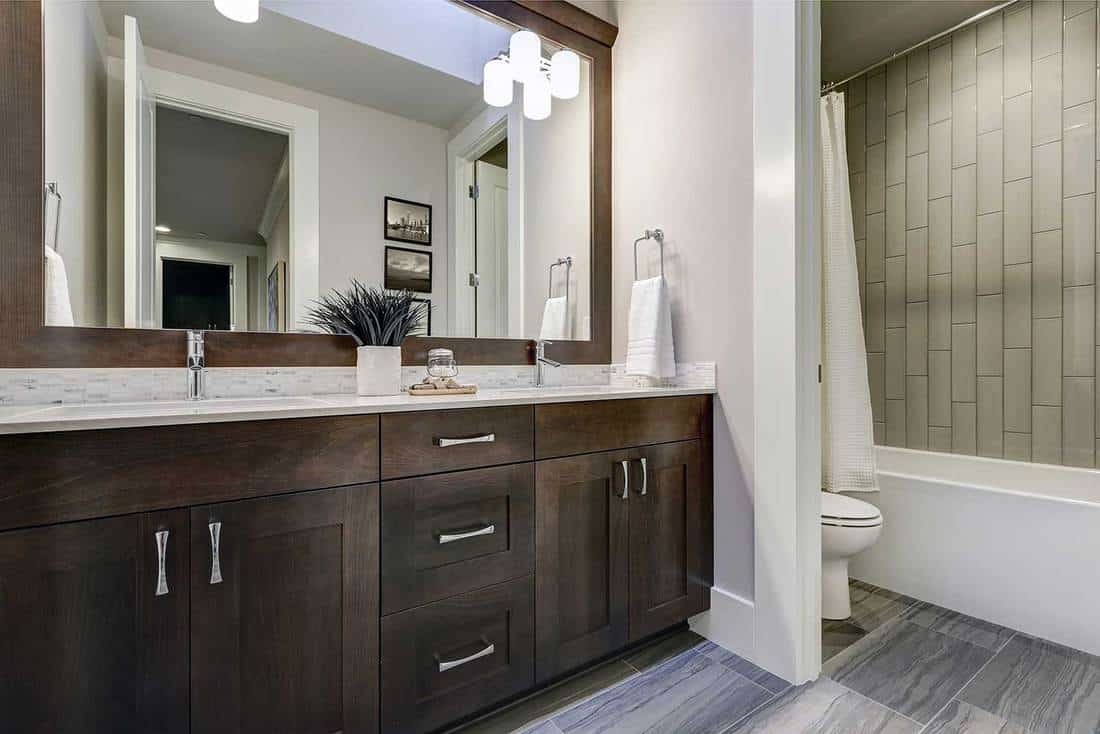 For example, showers almost always use tile but rarely do they use the kind of tile as shown above. Personalization isn't always about doing something entirely out of the box as it is doing something ordinary in a way that isn't common. 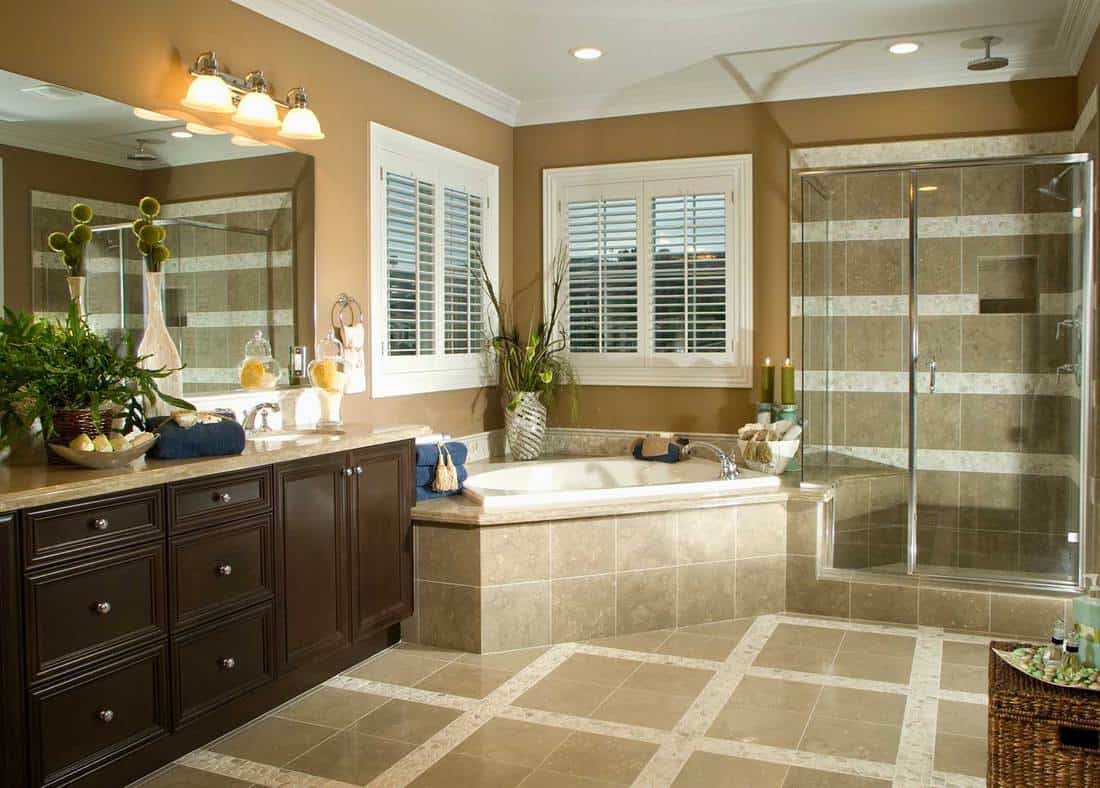 If you have an excess of materials, but don't want to use the same patterns over and over again, consider new ways in which the tile can be used without being repetitious. This bathroom uses the same two materials in three different ways.

On the floors, patterns of four tiles are surrounded by the lighter stone. In the shower, the same materials are used in a design that has more resemblance to layers. On the side of the tub, the lighter stone has been abandoned, and the simple square tiles create a significant effect.

Using several different tiles can give you a wonderfully detailed room, but it can occasionally come across as overdone or overwhelming. There's nothing wrong with using the same kinds of tiles in several different places. In this bathroom, the same tiles are used in the shower, on the floor, and surrounding the tub. 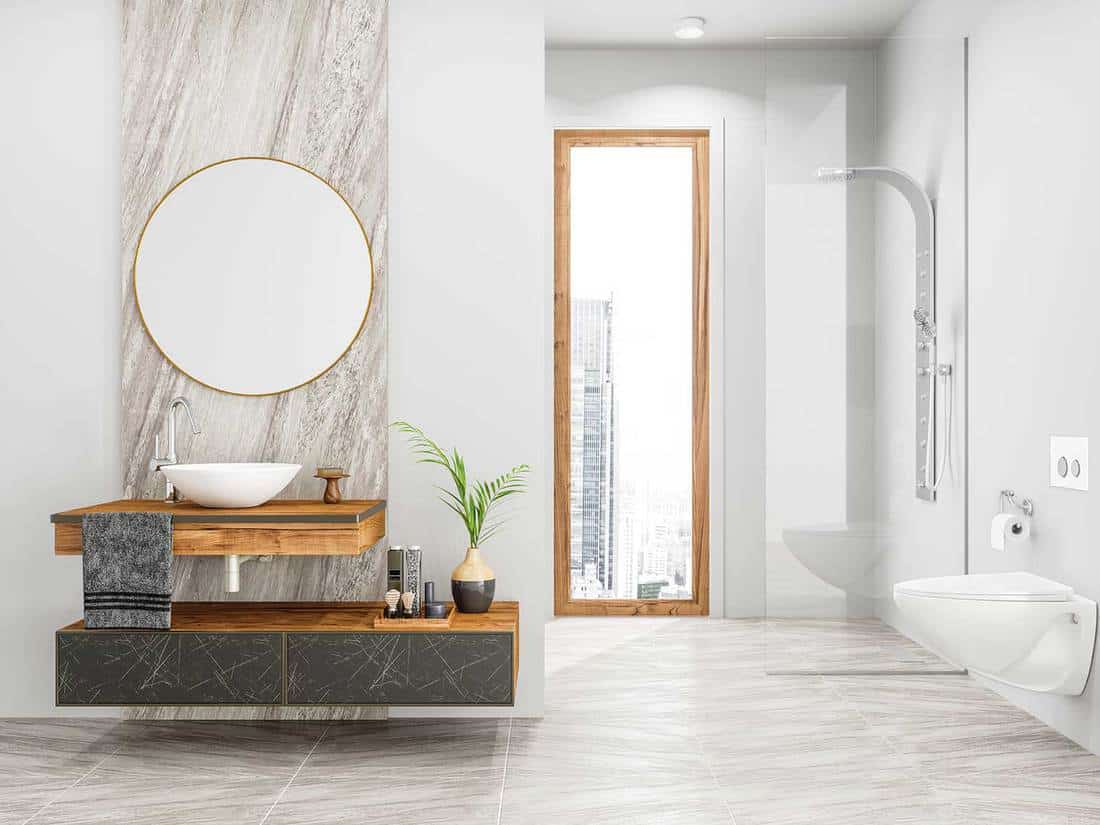 Tile, when viewed as a kind of decor instead of a purely functional item, can be used to draw attention to certain places and section off areas of a room. The same tiles that are used on this floor were also installed on the wall behind the mirror, drawing attention to it and making it a focus of the room. 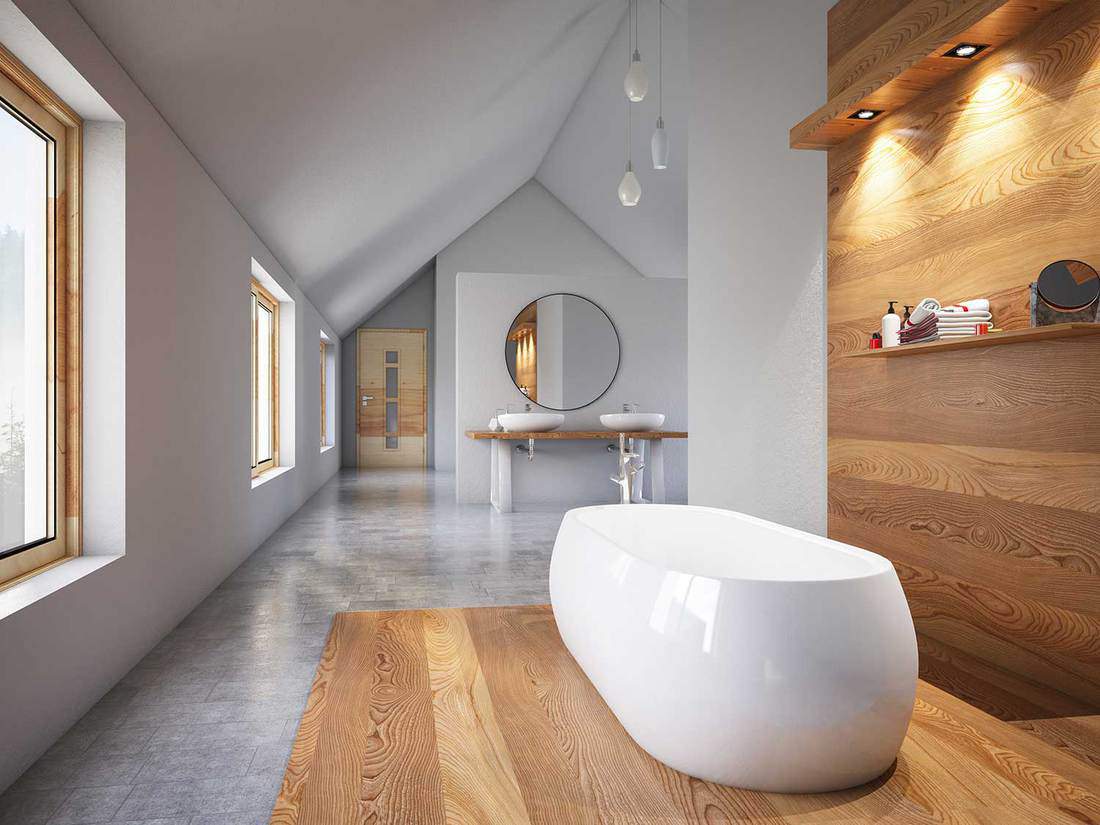 Stone and wood have been used quite effectively here. The hard lines on the floor compliment the door, and the table in the background, white the tub, and sinks are all rounded edges, giving a nice contrast. 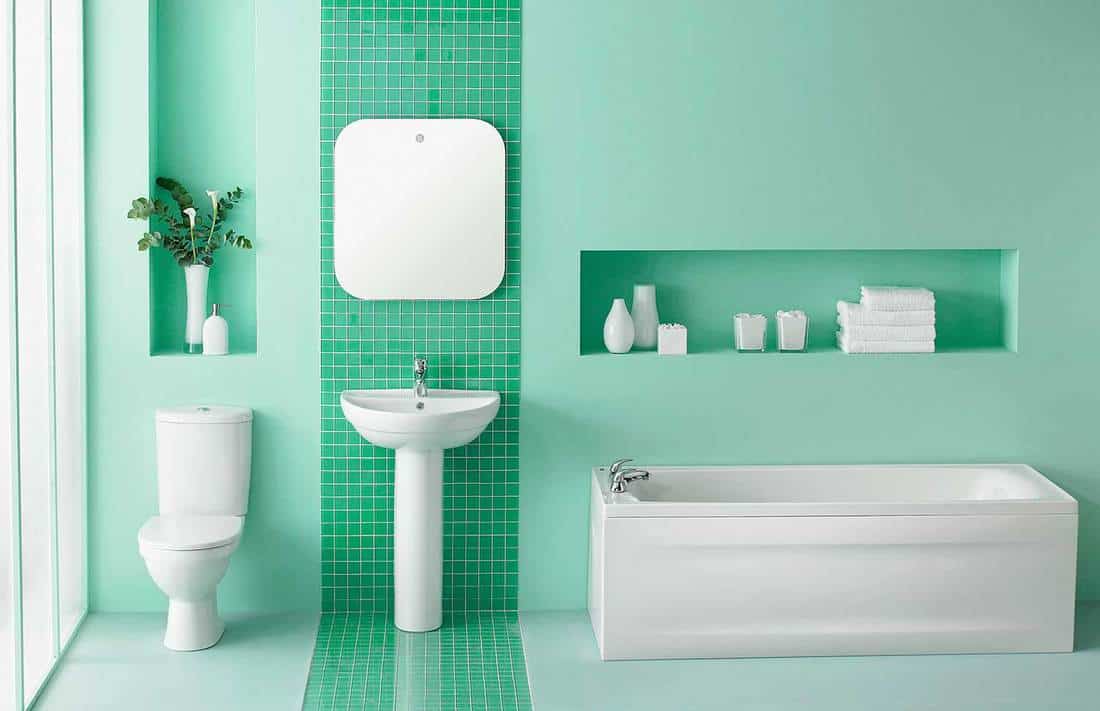 The different shades of blue in this bathroom complement each other well. The tile that extends from the wall unbroken to the floor is not only interesting and attention-grabbing, but it pulls in your eyes and provides a focus for the room. 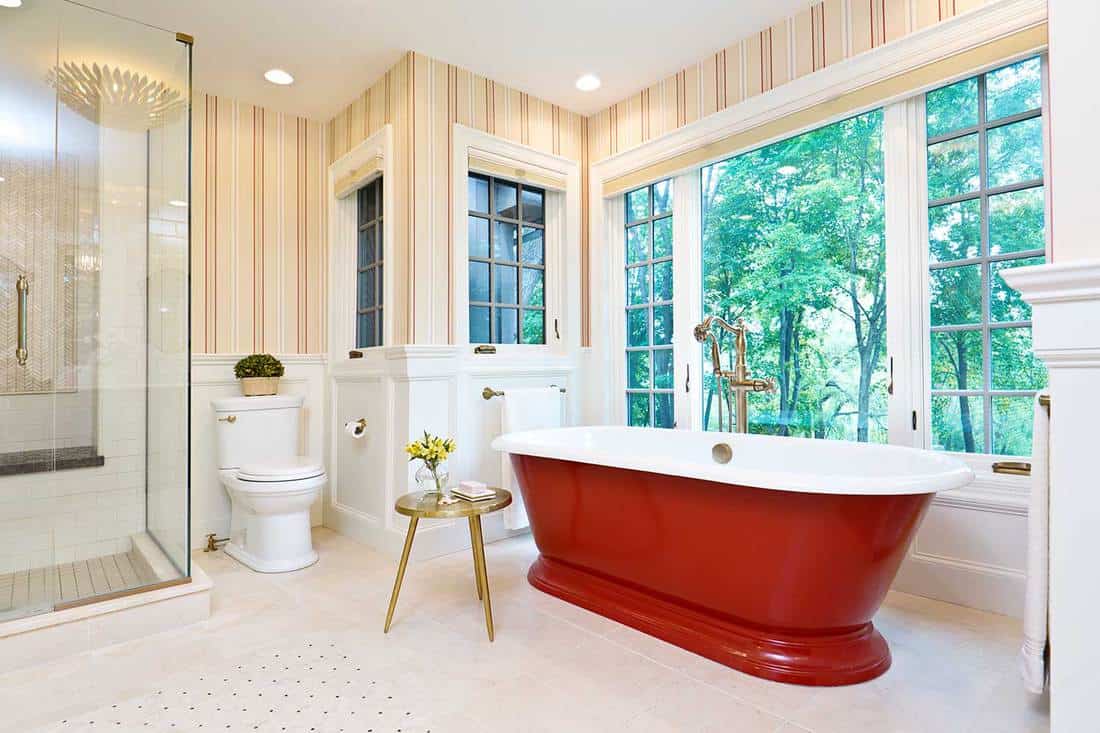 There are four different kinds of tile used in this bathroom. The bathroom floor has smaller tiles with black spots that have seemingly been used to mark the center of the room, effectively grounding it, and they are surrounded by larger tiles, giving contrast.

The shower floor has smaller tiles similar to the tile on the bathroom floor and is backed with long, white tile that extends from inside the shower to behind the toilet. 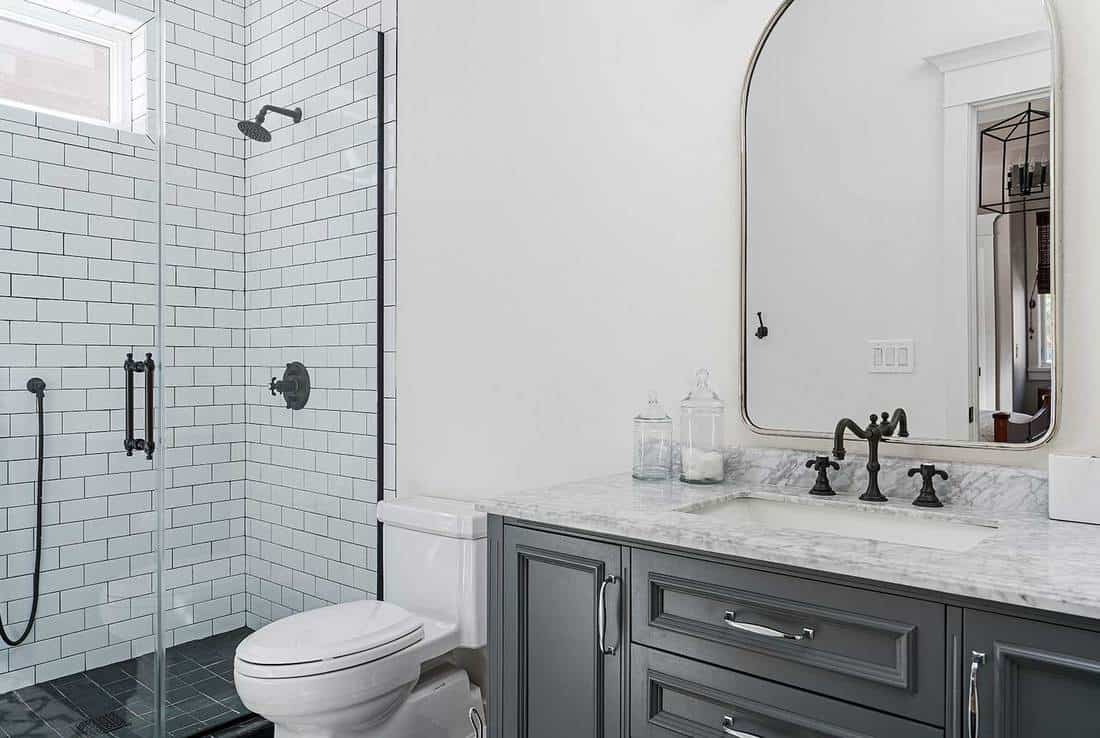 Tiles have been used to careful effect here. They weren't used in the splash zone behind the sink, where marble is used instead. Rather, they've only been installed in the shower. Black tiles with white grout on the floor and white tiles with black grout on the walls. 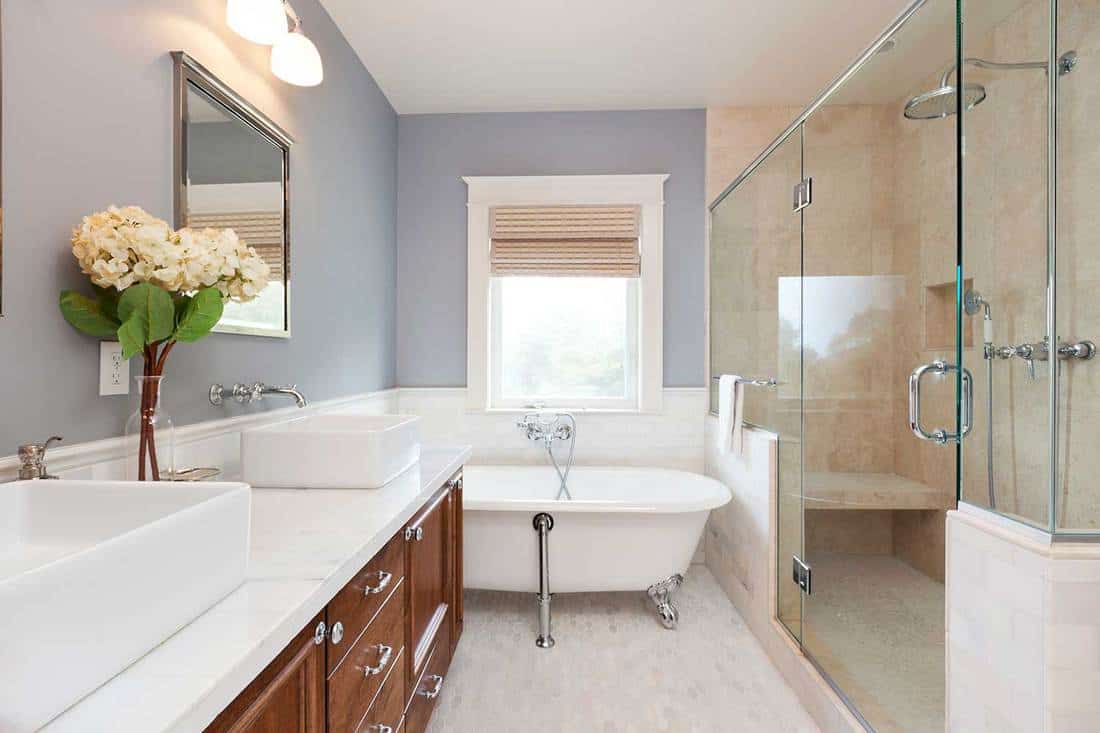 Don't be afraid to use several different tiles. This bathroom features dappled hexagonal tiles on the floor, white rectangular tiles on the wall near the tub, and square, tan tiles in the shower. While the white and tan tiles are neutral and would blend well anyway, they are brought together nicely by the dappled colors on the floor.

How to find a Bathroom Remodeling Contractor

Knowing just what you want for your bathroom tiling style isn't enough. The most gorgeous design won't be enough unless you find a reliable qualified contractor for the actual tiling project. Finding a good contractor early on can help you get a better idea of what your options are, and how much your dream bathroom might end up costing you.

How Far Up the Bathroom Wall Should I Tile?

If the wall in question is the wall behind the bathroom sink, most standard tiled backsplashes are a minimum of four inches tall. That being said, it's all up to personal taste. A minimum of four inches will help protect the wall from water, but if you feel like going higher, or tiling any other parts of your walls, you can go as high as you want.

How Far Above the Shower Head Should the Tile Go?

As a general rule, you're going to want to tile at least six inches above the showerhead, but you can't go wrong tiling higher, as it will just make the shower seem taller.

Should You Tile Around a Toilet?

You can, but you don't need to, as bathroom floors are generally water-resistant.

How High Should Tile Border Be in a Bathroom?

Tile behind the bathroom sink should be at least four inches high, and tile in the shower should be higher than 6 inches above the showerhead. Anywhere else is entirely up to you!

Are Big Tiles Better in a Small Bathroom? 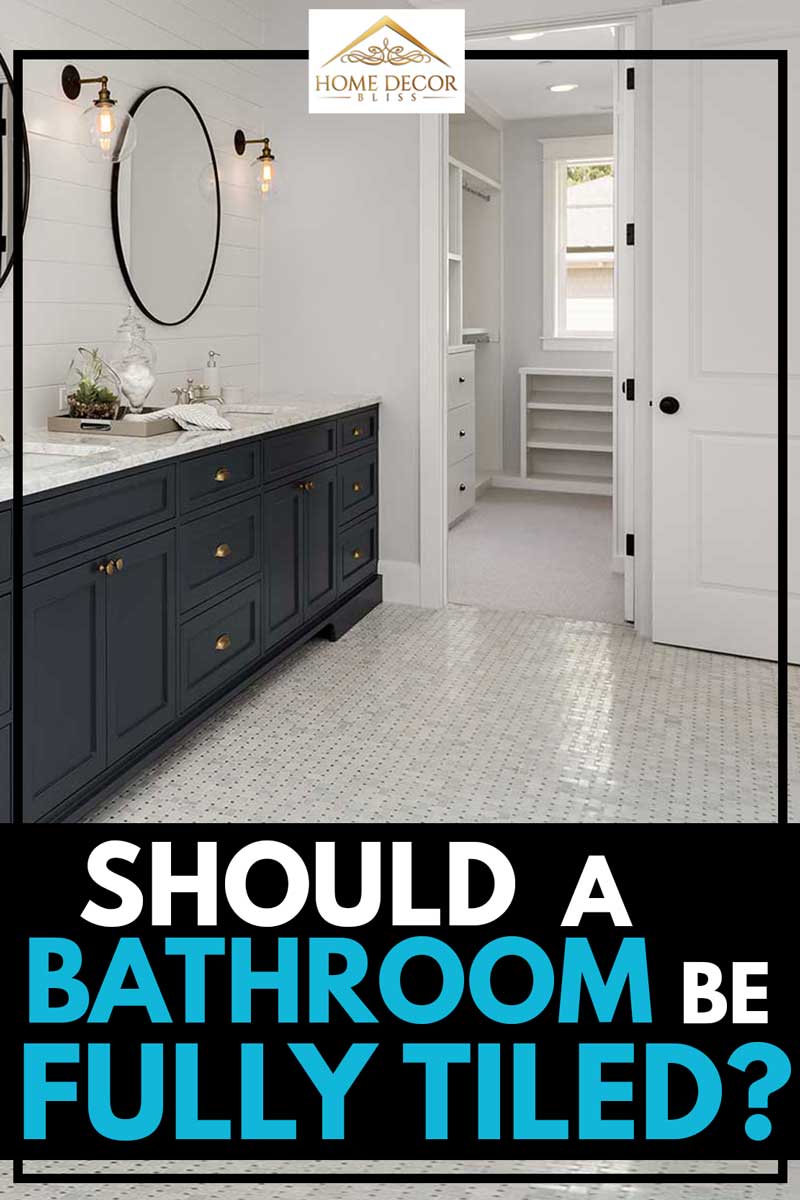 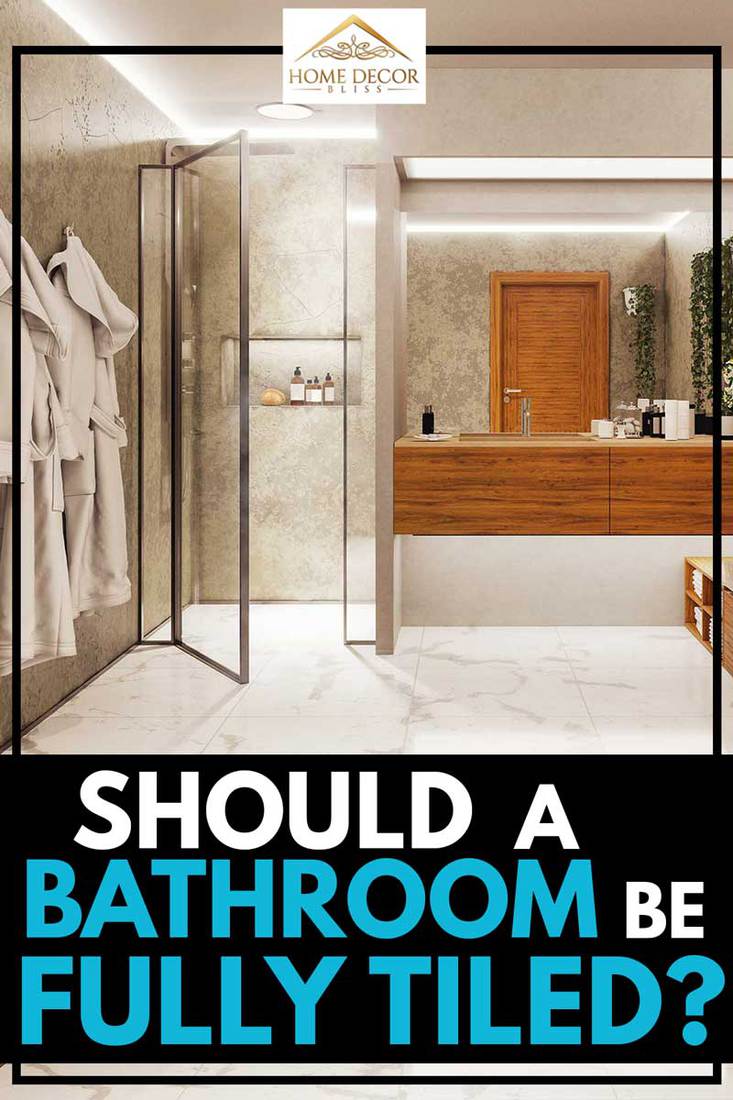 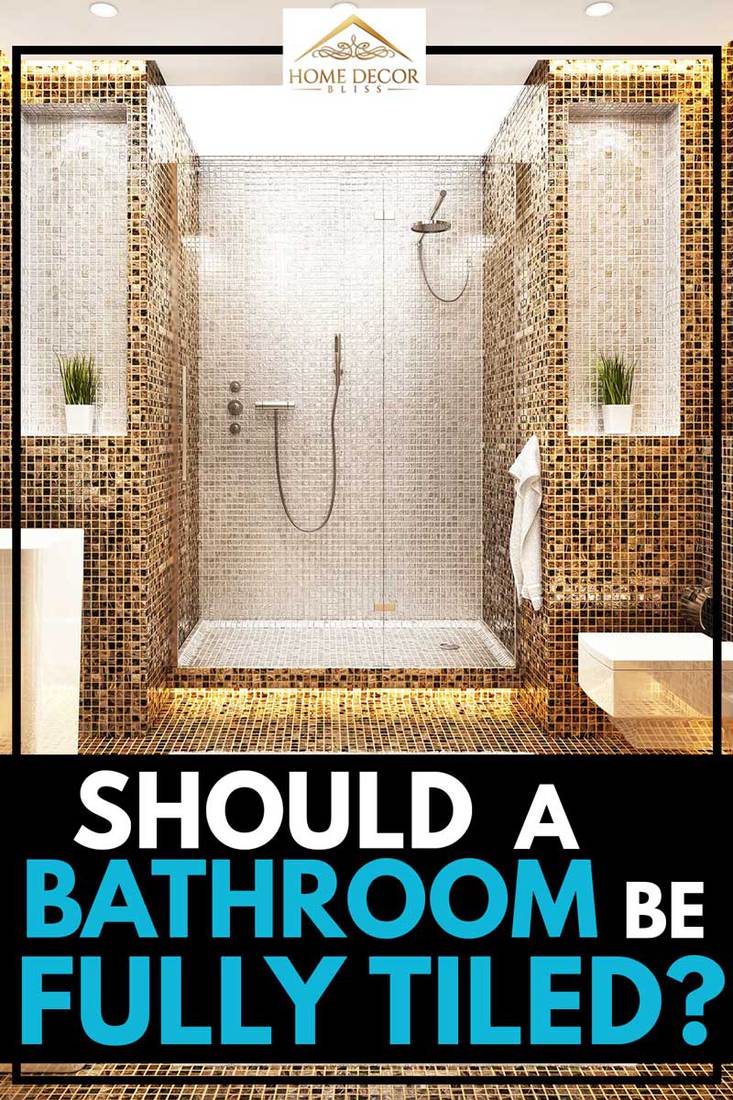