When you have issues with your power, the first thing you check is your breaker, but yours is warm to the touch. Should you be concerned, or is that normal? We did the research to bring you the answer.

A breaker can be warm to the touch when running and still be perfectly normal. You should be wary if the breaker feels hot rather than warm. It could be using too much power, usually due to an overloaded circuit, or the breaker might be outdated. Either way, call an electrician.

In this article, we’ll examine when a breaker is within normal warm range versus when it’s too hot, why your breaker is running so hot, and what you should do when it happens.

Is It Okay If A Breaker Is Warm To The Touch? How Hot Should A Circuit Breaker Get? 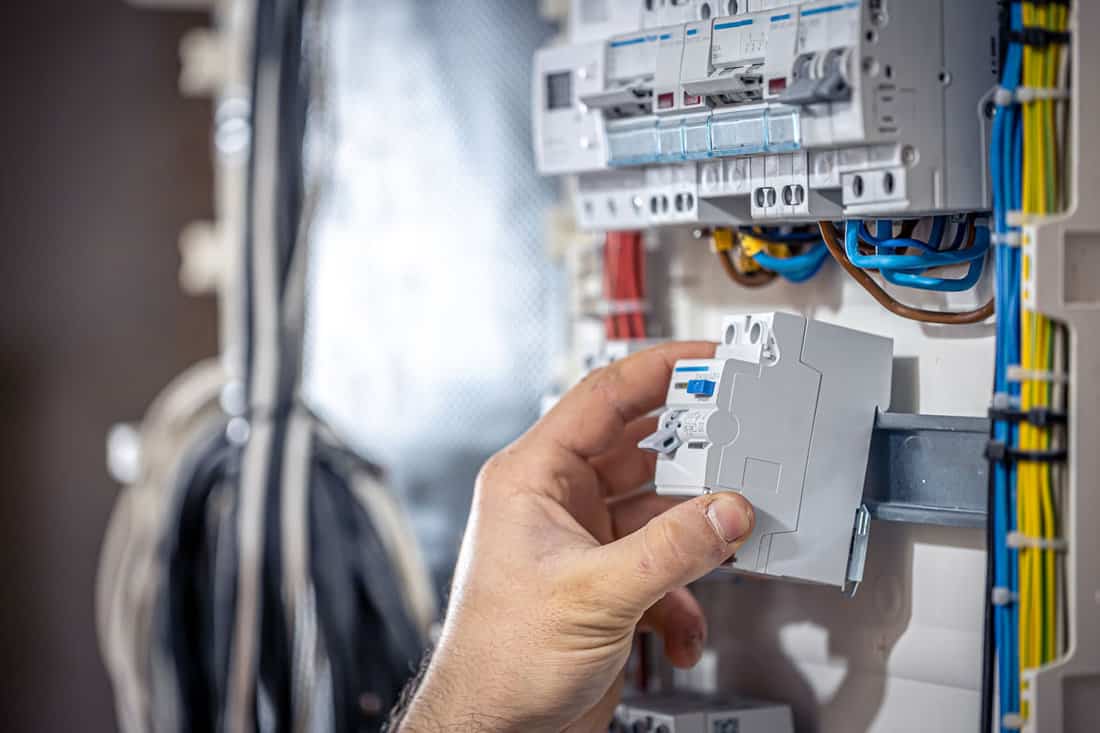 The responsibility of a circuit breaker is to stop electrical current flow when it surpasses a prescribed limit. You can think of the breaker as a type of switch that keeps your home from catching on fire.

Since the breaker produces electricity and electricity generates heat, it is indeed entirely normal for your breaker to feel warm to the touch. Now, warm is not hot. When you touch it, you should feel some heat emanating off the breaker, but not enough to concern you.

The amount of heat should certainly never be enough to cause you any kind of pain let alone possibly burn you. When a breaker exceeds 140 degrees Fahrenheit, then it’s officially entered territory deemed too hot.

How To Test How Warm Your Breaker Is 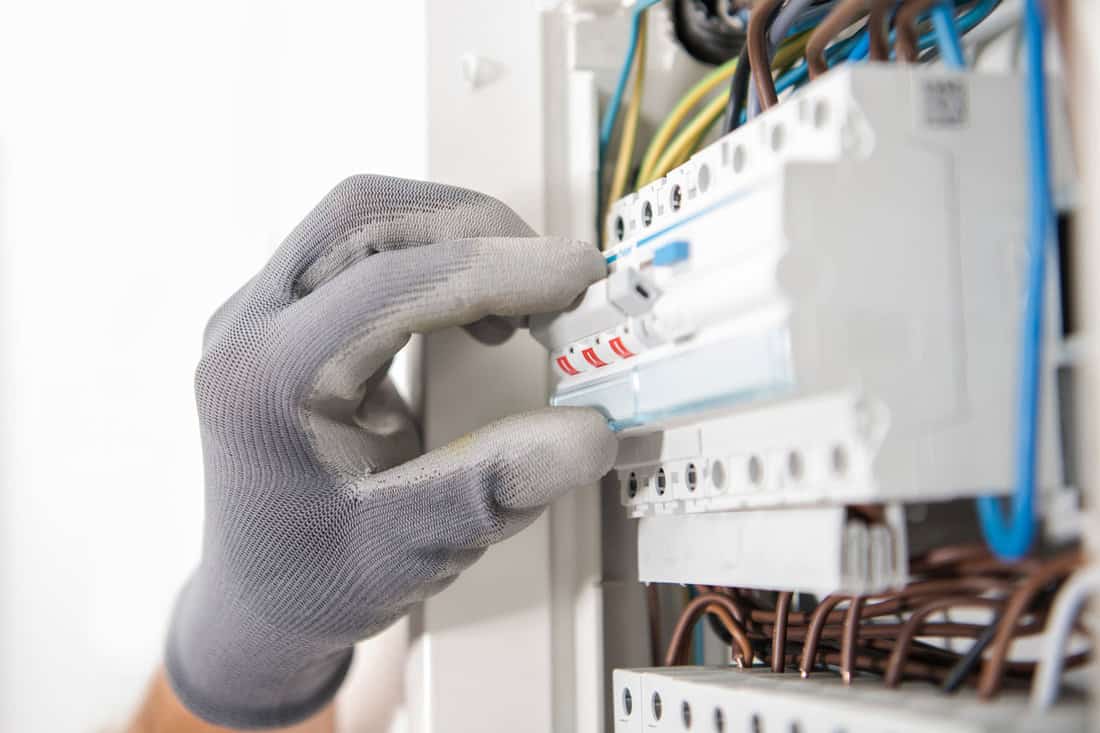 Do you suspect your circuit breaker might be behaving abnormally? There are several ways to ascertain that, so let’s go over them now.

By far the simplest means of confirming whether your breaker is at a normal warm range or running far hotter is to touch it.

Avoid making direct contact with any metal components. Metal is an excellent heat conductor and thus can be very warm when the breaker’s temperature begins to rise.

Will you burn yourself if you touch a metal surface heated to 120 to 140 degrees? The answer is no. Well, only if the contact is for five seconds or less. Prolonged contact could potentially cause burns.

Thus, only touch the plastic components of your breaker, and keep your contact short just to be on the safe side. It should only take a second or two for you to gauge whether the breaker is just warm or very hot.

Use An Infrared Thermometer

How do you know what temperature your breaker is operating at? You’ll need a device known as an infrared thermometer.

Take a look at this infrared thermometer on Amazon.

An infrared thermometer can gauge the breaker temperature without you having to get too close. That’s ideal in case the breaker is at risk of being tripped itself or is very hot to the touch!

To use an infrared thermometer, hold it at least six inches from the breaker. The thermometer should be pointed directly at the breaker, then you can press the trigger.

Make sure you hold your hand steady and keep your finger locked on the trigger until the thermometer produces a temperature reading. Then you can let the trigger go.

Or An Infrared Camera

If an infrared thermometer isn’t the most efficient option for you, then as an alternative, you can always try an infrared camera.

By snapping some shots of the breaker with the specialized camera, you can get a reading on whether its temperature is just within the right range or too hot.

Take a look at this infrared camera on Amazon.

Why Is My Breaker Running So Hot? 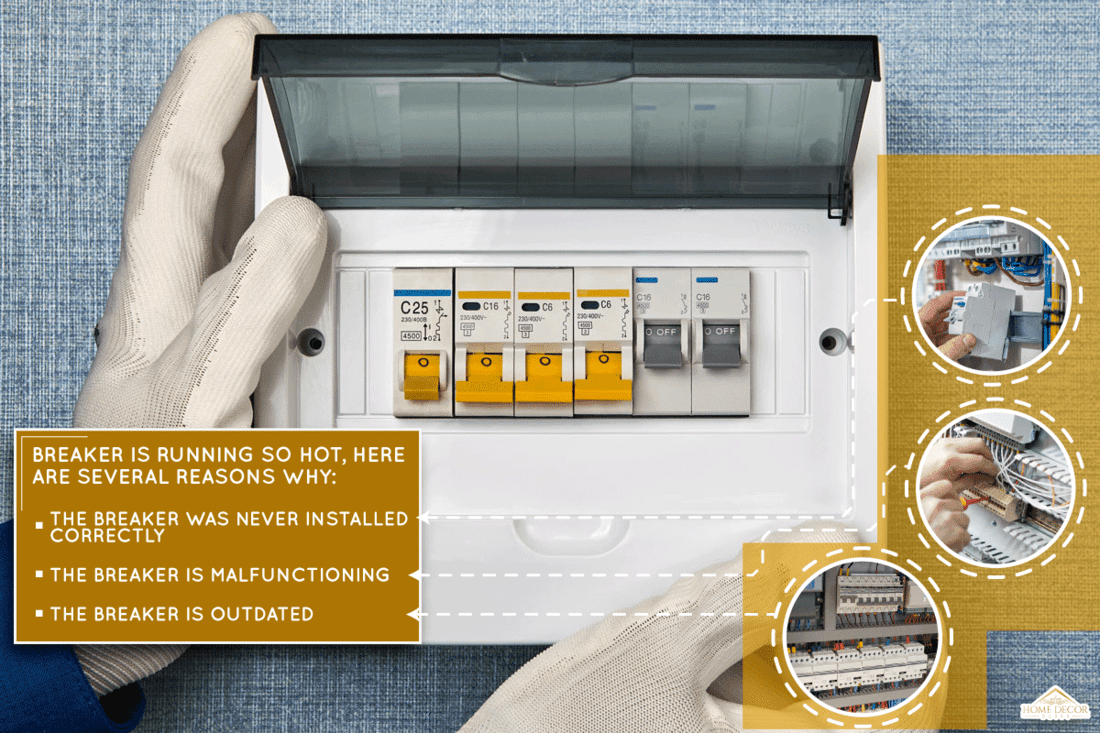 You’ve confirmed through one or more of the above means that your breaker is running hotter than you’d like. What exactly is going on with your breaker?

Well, it can come down to one issue or several, but either way, the breaker is faulty. Let’s examine what could be wrong.

The Breaker Was Never Installed Correctly 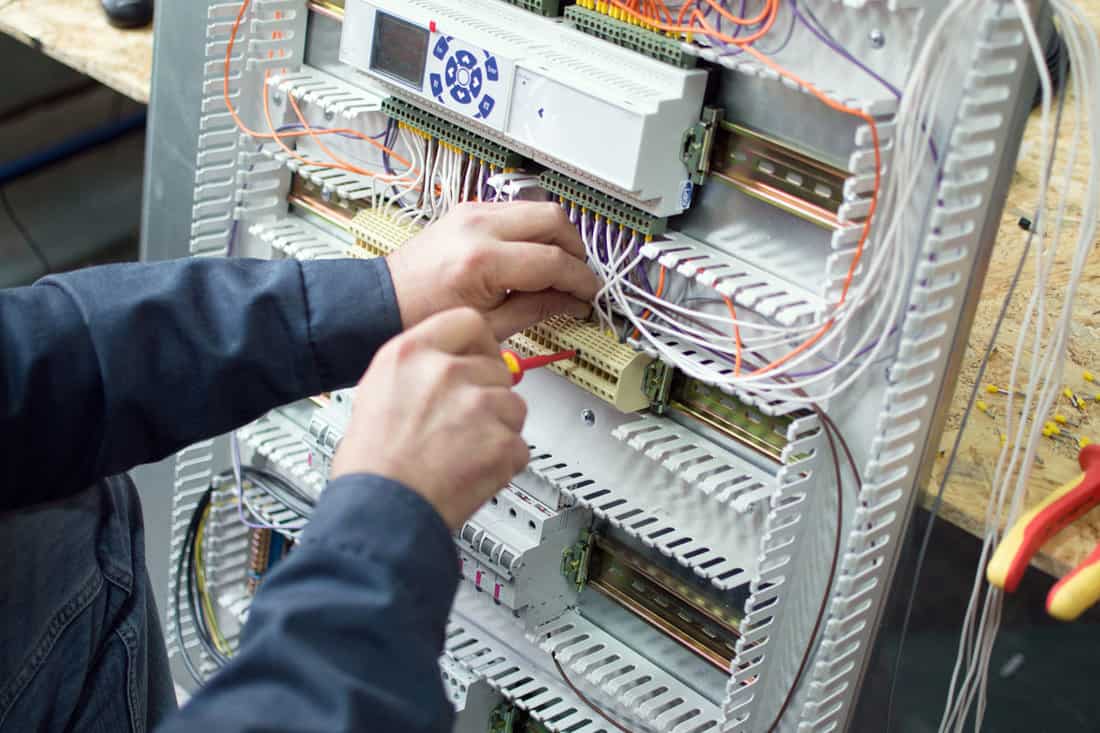 You might have been the one to hire a team of electricians to install your circuit breakers and do your wiring, or this job could have predated the time you’ve owned the house.

In the latter situation especially, you cannot say for sure whether the team did a quality job because you didn’t make the hiring decision, you didn’t oversee the work, and you have no idea what the previous owner paid.

It very well could be that they cut some corners here and there because house renovations are so costly, so they didn’t hire the best electricians.

Thus, the electricians did the minimum amount of work to get the house wired and could have gotten lazy when it came time to install the breakers.

The lack of proper installation from all those years ago is now coming back to bite you as your circuit breakers are consistently running too hot.

The Breaker Is Malfunctioning

A poor-quality circuit breaker is more likely to malfunction with time. The breaker is supposed to run at a power load of 80 percent, never 100.

A malfunctioning breaker can easily surpass the 80-percent limit because the breaker might not be able to recognize its own limits anymore.

Even if you have quality breakers, if they’ve been around the block and are years old or even decades old, then it’s only a matter of time before they stop working as efficiently as they once did.

The Breaker Is Outdated 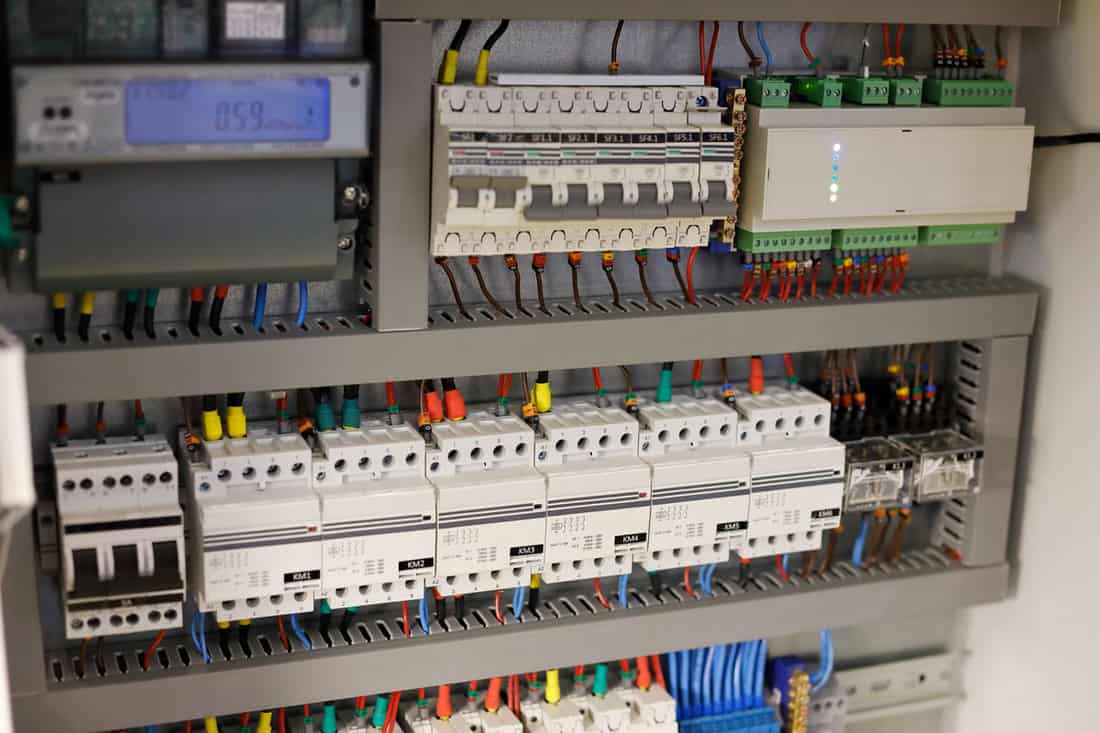 Speaking of old breakers, it's likely that if yours were there when you moved into the house and that the previous owners lived there for a while that your breakers are outdated.

Outdated breakers can easily become overloaded, which puts the breaker at risk of failing. When you need the breaker most, it won’t be there.

You’re also going to pay quite a lot more on your monthly electricity bills with old breakers than you would with a new set, as older breakers are not nearly as energy efficient.

What To Do When Your Breaker Feels Hot

Okay, so you’ve deduced that your breaker is running hot, and you have a better idea now about why that is. So now what do you do? You shouldn’t do anything except call an electrician.

Tinkering with a breaker is a health hazard, as you’re at risk of burns and/or electrical shock, possibly even fatal shocks. Even if you have a basic understanding of how your breakers work, leave this job to the professionals.

When an electrician comes out to your home, they’ll open your electrical panel and usually power off the main breaker.

Then they’ll detach the front panel to inspect the breaker wiring. On either side of the breaker box are metal parts known as bus bars.

The flat bars are part of the circuit breaker’s circuit and help produce electricity. However, they’re always live unless an electrician turns them off, even when the breakers are powered down.

That’s why we suggested you not do this job yourself. An electrician can avoid the bus bars, but you might not have known to do that.

Now that the electrician can see all the nuts and bolts so to speak, they can check the circuits to determine which are worn and need replacing, which connections should be redone, and whether the wiring should be replaced.

By the time the electrician is done, your breakers should only ever run warm to the touch from now on, never hot! 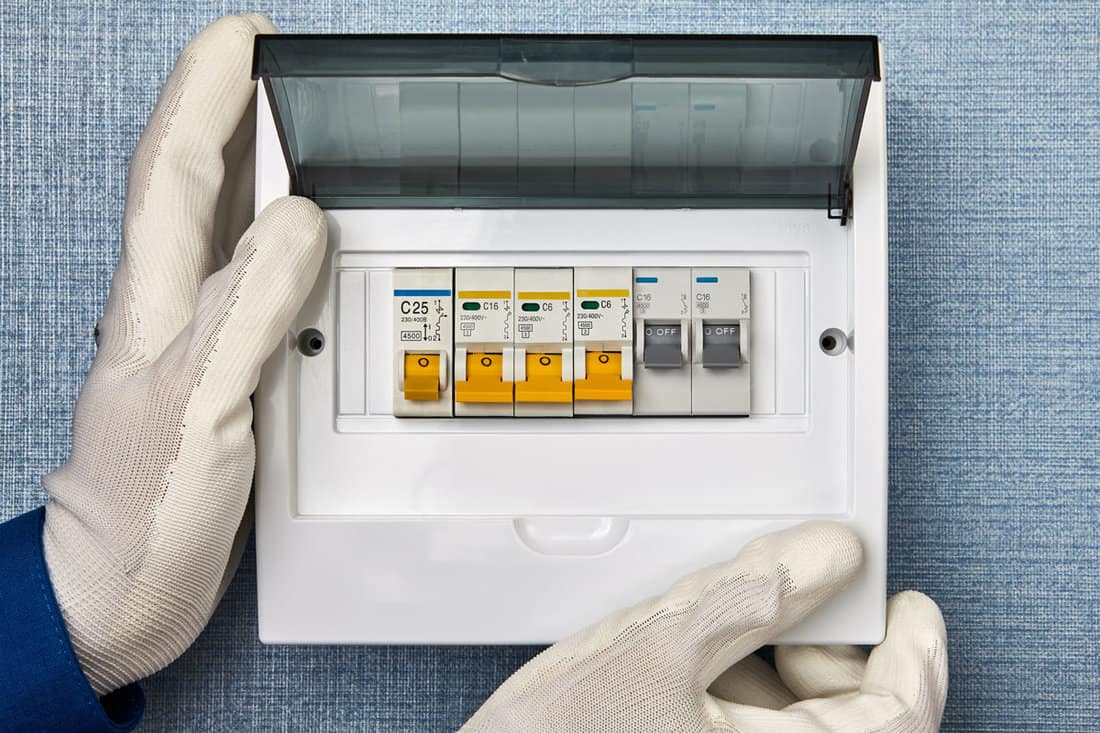 Circuit breakers are supposed to feel a little warm if you touch them with the back of your hand, but they should not be hot. If your breakers are hot, that means the breakers are in some way malfunctioning or that they’re outdated.

We want to remind you one more time to never mess with electrical components like your breaker box yourself. It’s for your own well-being and safety!

If you enjoyed this post, then make sure you check out this other great content on the blog:

Do Toilets Use Electricity?