Yes, it is possible to have a shower caddy be "too" heavy for the shower head. Generally, you want to ensure you don't put too many products in/on a hanging caddy, as this can pull your shower head down.

Using a suction caddy that goes on the wall might even be worth it, as this isn't as likely to cause damage to any structures or fixtures.

As we begin, we will cover all things shower caddies and discuss how much weight one can hold. Furthermore, we will tag 11 hanging shower caddies that will hold your items without damaging the shower head. With that said, let's dive right into this topic! 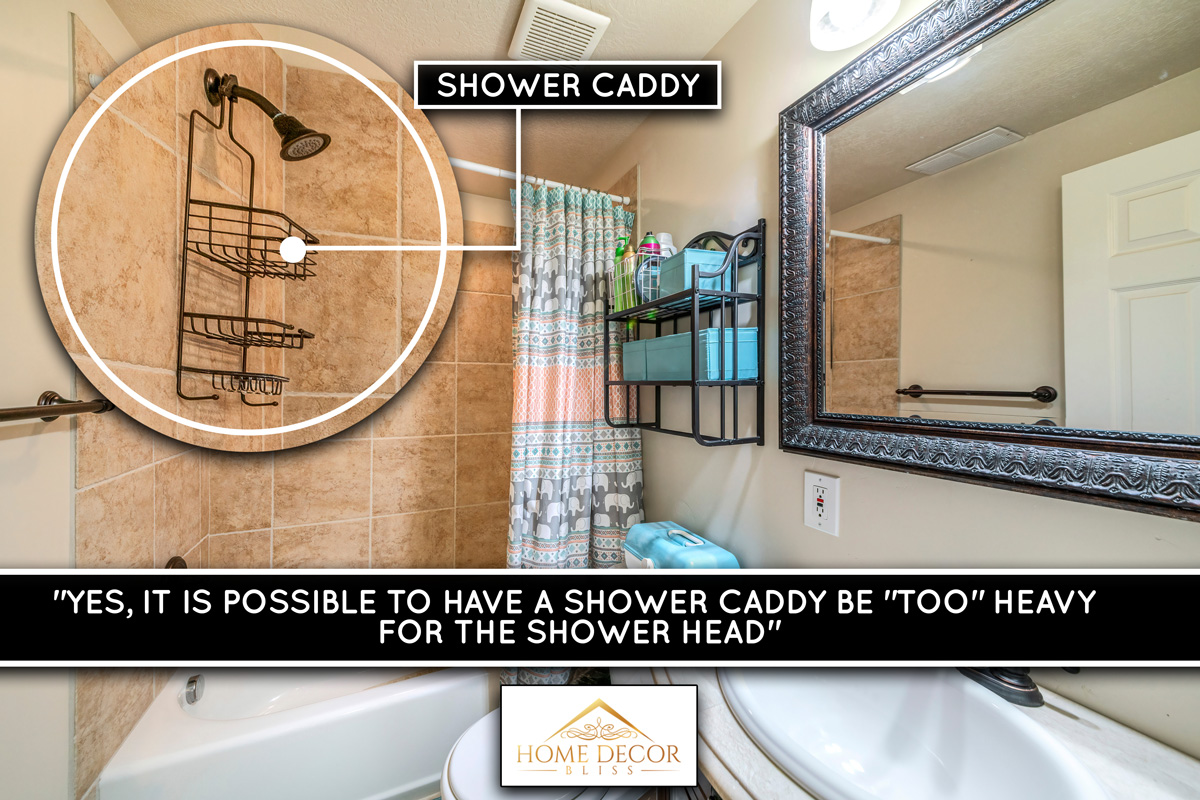 How Much Weight Can A Shower Caddy Hold? 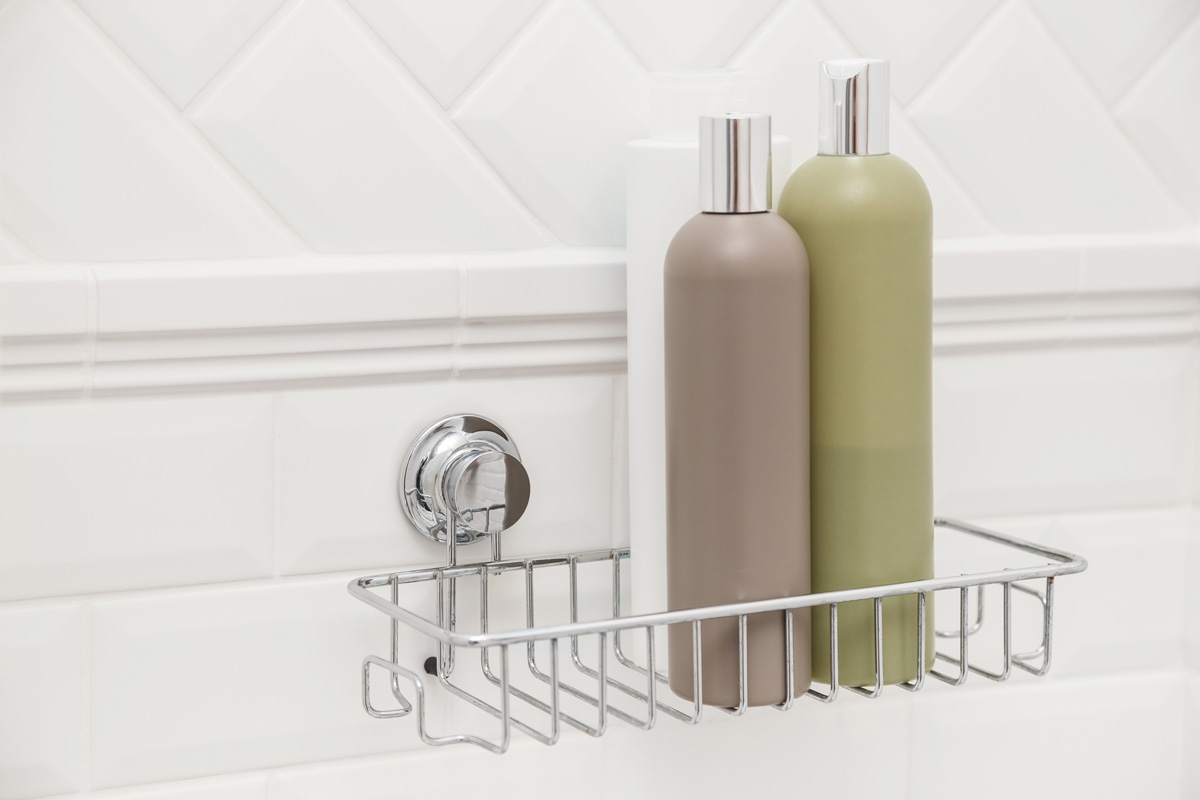 In general, you can expect a shower caddy to hold between three and 15 pounds. That said, if you hang your caddy, you don't want to have more than a few pounds of products in it, as this can become a problem for your shower head.

As we mentioned above, putting excessive weight on your shower head can cause it to pull from the wall. Not only can this harm the actual head itself, but it could mess with your water supply and pipes.

On top of that, not all shower caddies are the same. For example, the design of a caddy can significantly affect how it distributes weight and sits on your shower head.

You also want to evenly place products within a hanging caddy to prevent it from hanging further to one side and falling, so keep that in mind.

As small as this seems, how you handle your shower storage can make a big difference.

How Do I Know If My Shower Head Can Hold A Caddy?

If you're wondering whether your shower head can handle a caddy or not, pull on it a bit and see how much it moves. Generally, if your shower head is loose and doesn't seem very sturdy, you don't want to hang anything from it.

However, if your shower head is sturdy and doesn't seem to be going anywhere, we think hanging a light caddy can be a great way to clear up space below.

As we covered, most shower caddies can hold at least three pounds, which is more than enough to hold a few extra bottles of soap.

You might also want to store your lightest items on the caddy. For example, razors, exfoliating gloves, small bottles of shampoo and conditioner, and whatever else you like to use can go in the caddy.

In general, the less weight and bulkiness your caddy has, the less likely it is to create issues for the structure of your shower head and pipes.

What Are The Best Hanging Caddies For My Shower Head?

Now that we have the basics down, it's time to find a caddy. Generally, we recommend choosing a shower caddy with a good grip, so it won't slide around on your shower's head.

Also, it's nice to find a hanging caddy with plenty of shelving/storage, so you don't have to cram all your products together. Luckily, endless options are available with as many as six shelves, so you're bound to find something.

On top of that, your caddy needs to be rust-proof. If you choose a cheaper, lower-quality shower caddy, it will likely rust pretty quickly in the shower.

Imagine having to clean rust marks from your walls and shower floor: we'll leave that to the imagination.

With all that said, let's check out 11 great shower caddies that will work well and last long below:

This shower caddy has a rust-proof design, features ten hooks, and one deep storage basket, is alloy steel, promises not to slip, and comes with a one-year warranty.

This shower caddy has a 2-in-1 design, promises to be sturdy and non-slip, can be height-adjusted, won't rust, has four suction cups to hold it in place, and comes in two colors.

Check out this hanging caddy on Amazon.

This shower caddy has a powder-coated finish in rust-proof metal, has a two-tiered design, rubberized shower head grippe, fits most shower heads, and comes with a 12-month warranty.

This stainless steel shower caddy has two large storage baskets, features a non-sleep grip, promises not to move around on your shower head, and comes in a few colors.

See it on Amazon here.

This hanging shower organizer is non-slip, rust-proof, has a modern style, has four hooks, two added suction cups, and comes in various colors.

This smaller-sized shower organizer has two shelves, is alloy steel material, has one deep bucket, four hooks, won't rust, has a non-slip design, and comes in various color options.

This hanging shower caddy has a non-slip design, an extra deep basket, two suction cups, won't rust, has an elegant chrome finish, and comes in a few different colors.

View it on Amazon.

This alloy steel shower caddy has an anti-slip grip, is easy to use and won't rust, drains excess water, and comes in a few colors.

Check out this caddy on Amazon here.

This hanging shower caddy has two soap holders, can hold up to 40 pounds, is fixed by strong adhesive strips, is 304 stainless steel material, and has a polished black finish.

View this shower organizer on Amazon.

This shower caddy is rust-resistant, alloy steel, three-tiered, has deep storage baskets, is easy to clean, and has great online reviews.

Is It Better To Hang A Shower Caddy On The Shower Head? 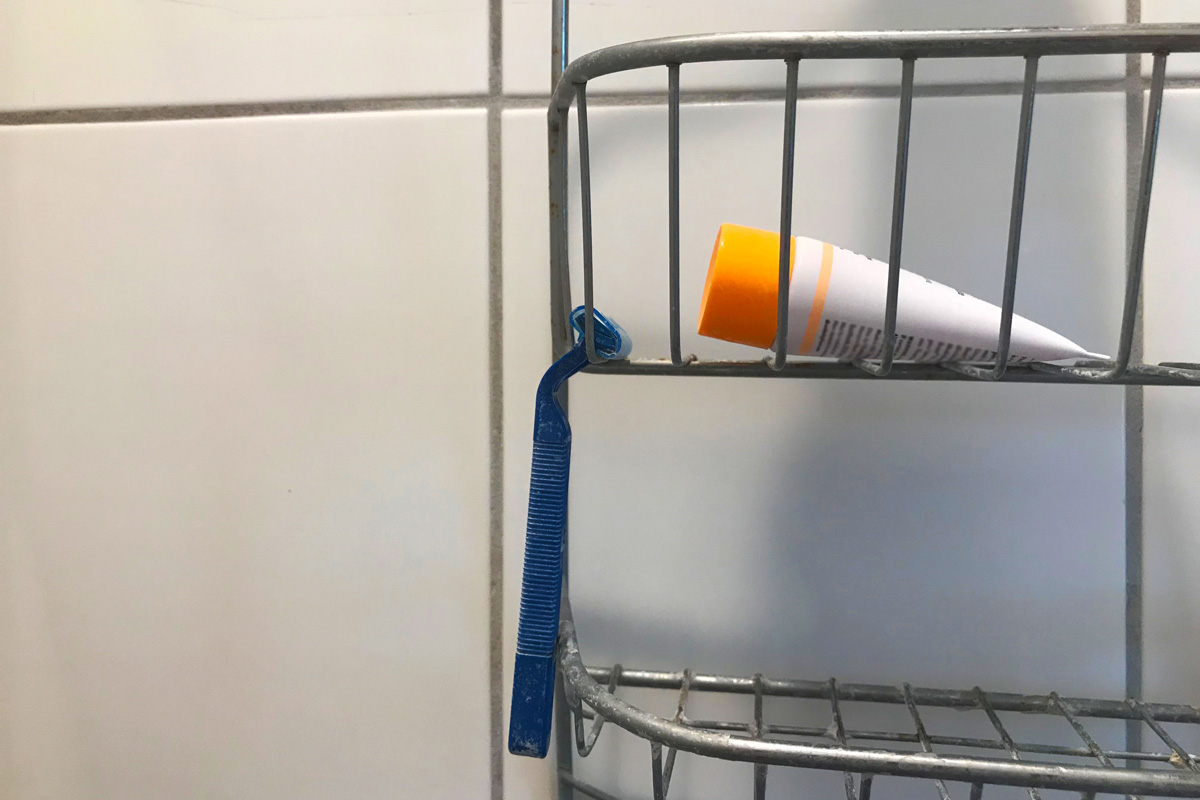 Although this can be an easy way to hold your products, hanging a caddy/organizer on your shower head can be damaging long-term.

As we said earlier, applying too much pressure or weight to your shower head can cause it to shift. In addition, your caddy might not be that effective depending on its design, so these aren't for everyone.

Generally, you want to choose a shower organizer that works for your routine. For example, if you have to shave or exfoliate, you can benefit from a hanging caddy that can hold your smaller items.

For bigger bottles and heavier items, you might want to keep those on a suction-cup shelf.

You can also keep your bigger and heavier products along the rim of your shower if you don't mind looking at all the bottles.

Some people don't like to have things everywhere, so how you organize your shower is up to you.

How Can I Stop My Shower Caddy From Slipping?

For those dealing with a slipping or sliding shower caddy, there are some ways to fix it. First, we recommend purchasing a hanging shower organizer with a rubber grip.

If you don't have a caddy with that, you can use waterproof tape around your shower head, which will help hold your organizer in place.

Some DIYers even recommend using rubber bands in front of your hanging caddy to keep it from slipping, although this can be a little unsightly, depending on your shower head.

Another great option is using a shower head clamp, which works as a barrier to stop your organizer from slipping or sliding.

Again, these can be hit or miss depending on how your shower head is angled, so you might want to choose a suction cup wall caddy instead.

Do You Need To Have A Shower Organizer? 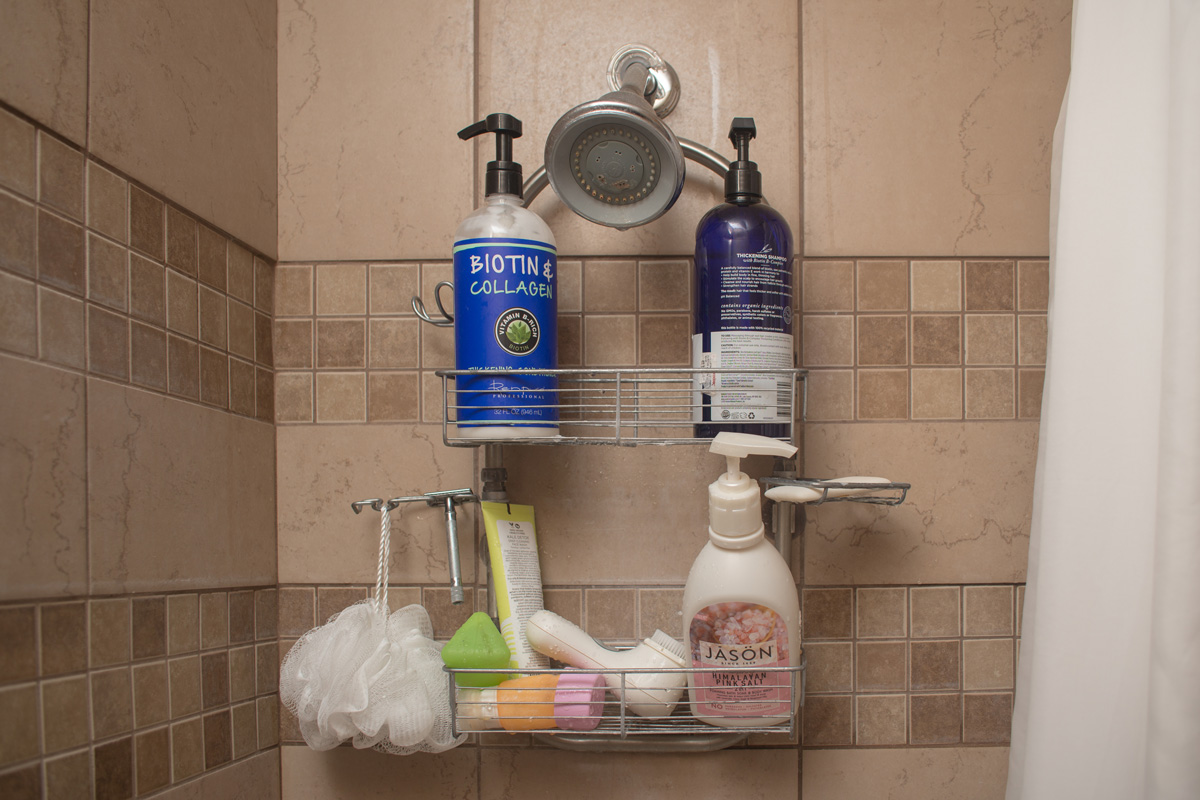 Depending on how big or small your shower is, you might not need an organizer or caddy. Generally, using a caddy can be beneficial if you lack space for storing your products.

As we showed you earlier, there are endless options for the shower head, so that's one idea to consider. In addition, you can also use shelving that suctions to your shower walls, which is less risky.

There are plenty of corner shelves that suction to the wall on either side, which are a bit sturdier than basic options. Moreover, finding a hanging caddy with suction cups to help secure it can take some pressure off your shower head. 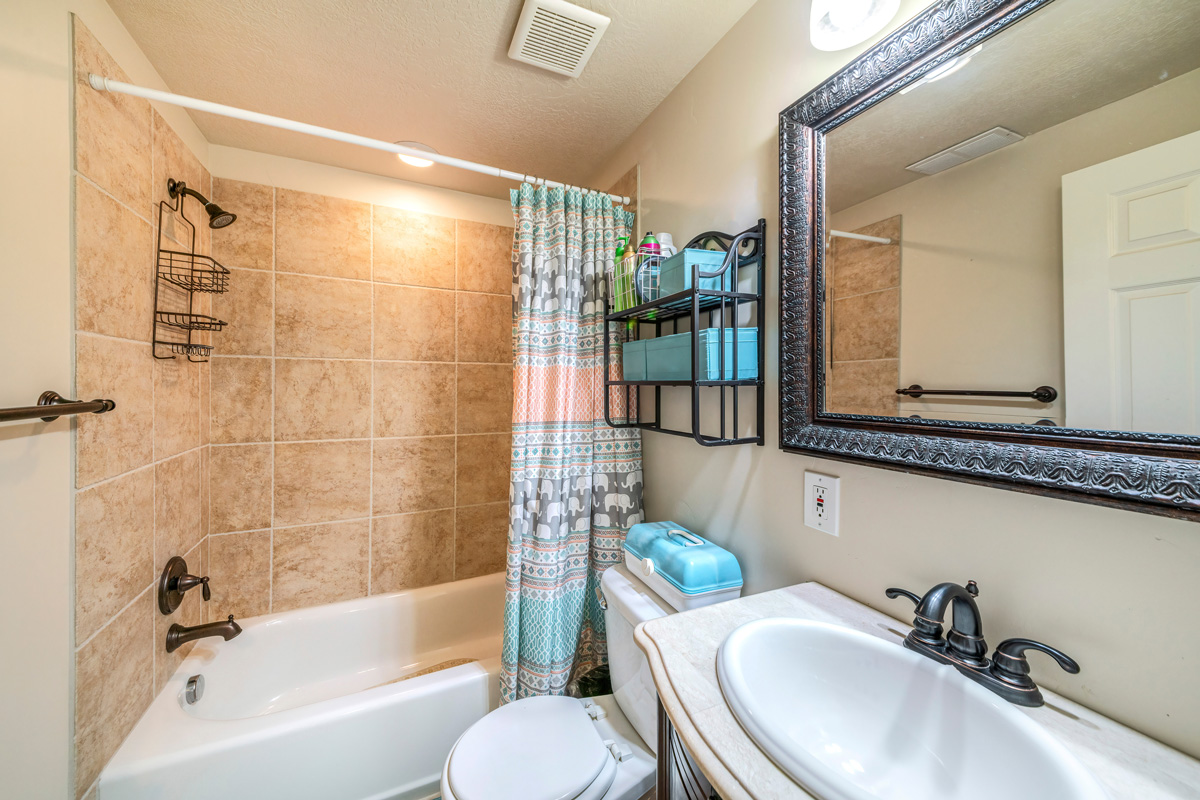 Whether you have a shower caddy hanging from your shower head or want to purchase one, it's always good to know your shower's limits. We found that a typical hanging organizer can hold anywhere from three pounds to around 15.

Of course, we don't recommend putting more than a few pounds on your shower head, as this can make it out of place and even break. You also want to find a caddy with a rubber grip to secure it from slipping or sliding.

Regardless, try to find organizers and shelves that fit your shower, and don't be afraid to try an alternative to traditional options.

Made it here? Check out these helpful related home posts below!

What's The Best Window For A Shower? [8 Great Ideas!]

Do Shower Filters Work? [And Should You Get One]

How To Clean A Fabric Shower Curtain Liner