Ceiling height is an important element of any home. It can change a room’s feel, making it appear wide and open or short and cramped. When determining the best ceiling height, it might be helpful to know the current standard height. We’ve researched ceiling heights to let you know what is common in most homes, and specialty ceilings rise to the occasion.

The standard ceiling height is now nine feet for the first floor of a home, while second story ceilings tend to be eight feet tall. Some rooms can have a shorter ceiling. The standard height has changed over the years, according to preferred styles and construction efficiency.

This standard height has changed over the years and isn’t set in stone, so don’t worry if your ceiling isn’t nine feet tall. We’ve done the research and can help you understand ceilings completely. For a deeper look into ceiling heights, ideas for how to make your ceiling appear taller, and answers to other important questions, please read on! 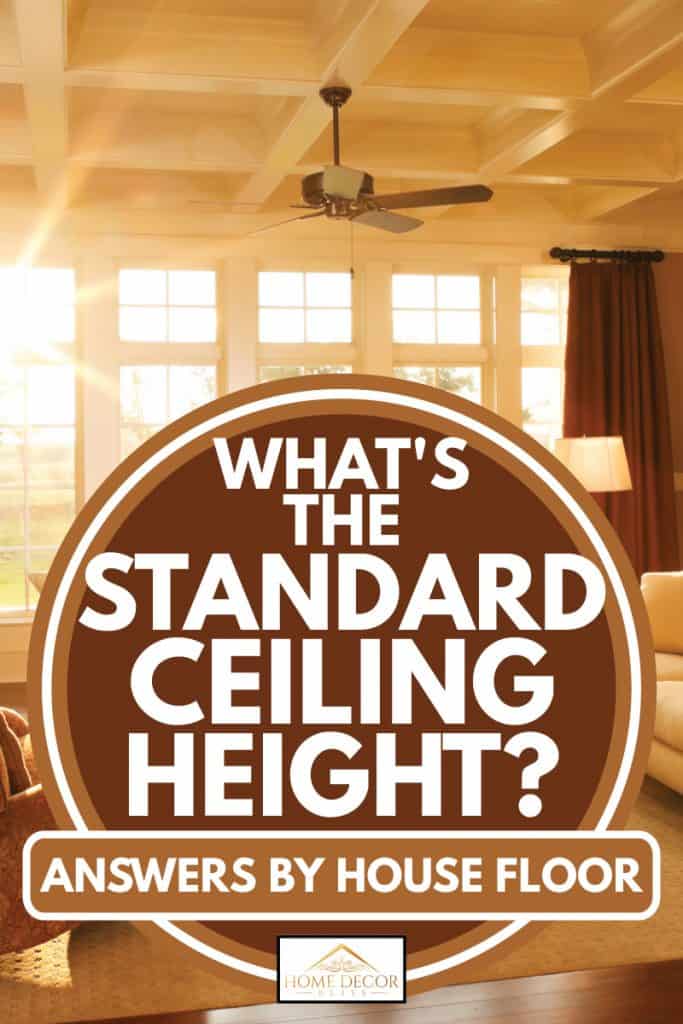 The nine-foot-high standard has not always been the case. In fact, ceiling heights have changed over the years. If your home is considered “pre-war” (meaning it was built before the 1940s), it might have ten to twelve-foot ceilings. This was considered trendy in a time when building costs were low, and space was plentiful.

However, this height did not last as many homes built in the sixties, seventies, and eighties came standard with eight-foot-high ceilings. This was the period in which lumber began to be produced in eight-foot pieces. Obviously, this made it more cost-effective to construct homes with eight-foot ceilings so that only one piece of lumber was necessary.

Also, there was a natural gas shortage around this time due to relations with oil providers in the Middle East. This made it important to conserve heat in homes and buildings. Shorter ceilings kept the heat from rising too high, making the fuel for heating go further. The eight-foot standard lasted until the mid-nineties. Thus, if your home was built before then, it might have shorter ceilings.

Though nine feet is the standard for most ceilings, there are certain types of specialty ceilings that you might also consider.

A coffered ceiling uses beams (usually faux, but occasionally the actual beams) to create geometric shapes on the ceiling. Generally, these shapes are squares or rectangles. Coffered ceilings offer depth and variation to a room. In order to coffer the ceiling, it must be at least nine feet high, and preferably ten. 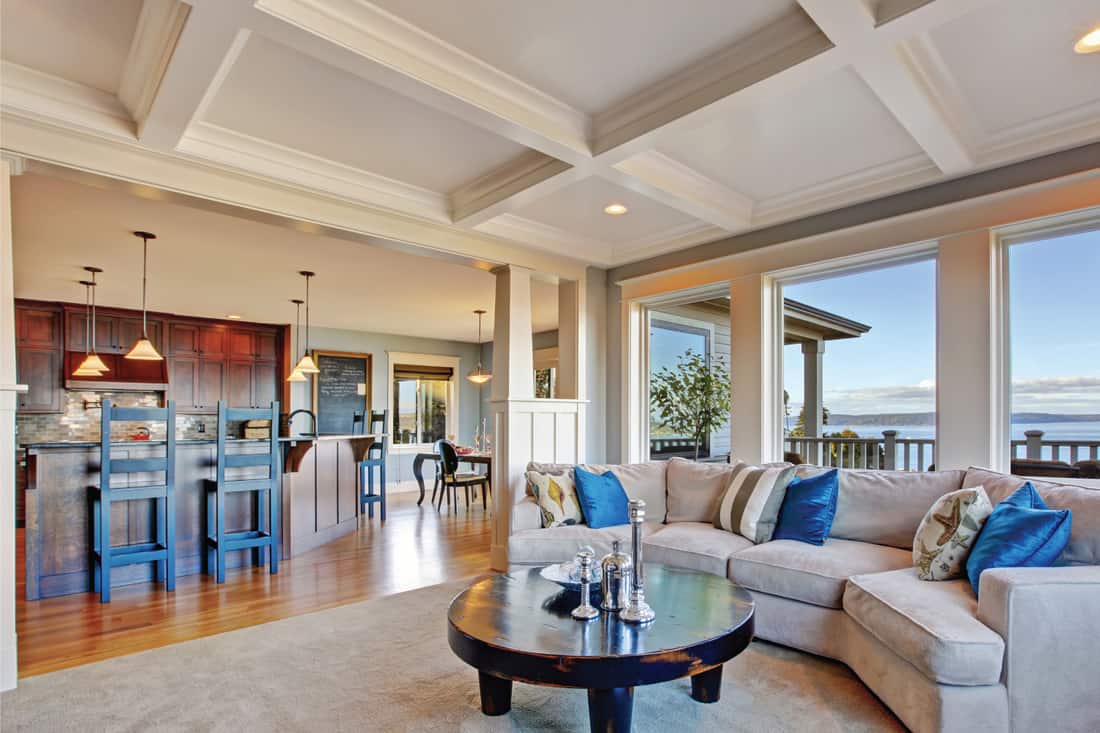 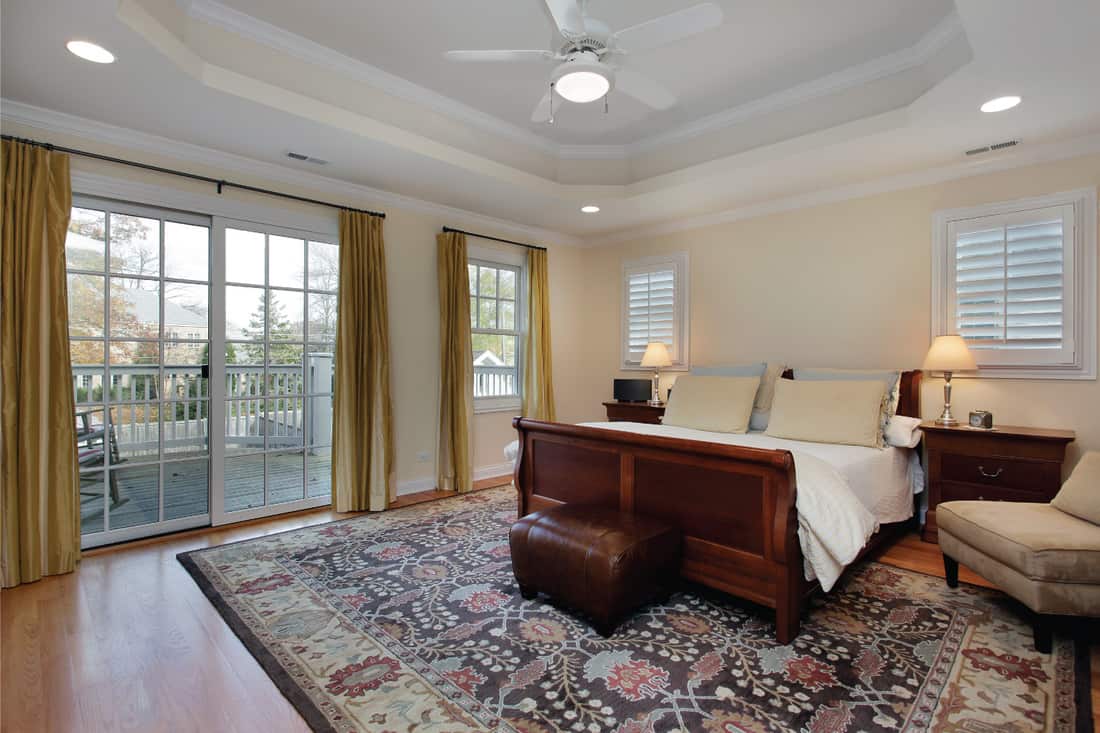 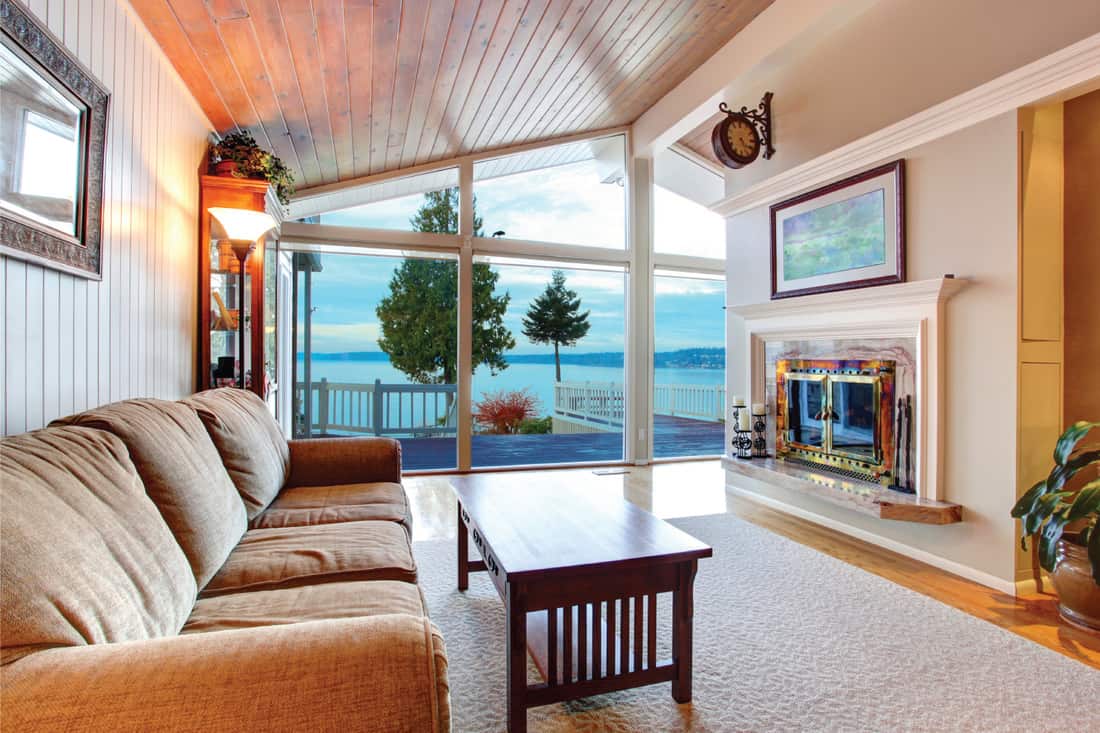 What Is Considered Low Ceiling Height?

For residential rooms such as bedrooms, living rooms, kitchens, hallways, or offices, anything less than eight feet is low. A seven-foot-high ceiling makes the space feel cramped and crowded. Most doorframes are around 80 inches high, so they look awkward in any room with ceilings lower than seven feet.

Some rooms, such as utility rooms, bathrooms, laundry rooms, closets, and other storage spaces, have shorter ceilings. The International Building Code (or IBC) recommends that the ceiling in any of these rooms be 80 inches (six feet, eight inches) high.

Basements also frequently have lower ceilings than other stories, and there is no set standard height.

How Can You Make Your Low Ceilings Look Taller?

There are several structural ways to make your home’s ceilings appear taller (read “How To Make Ceilings Look Higher [5 Practical Solutions]“). However, if you’re looking for simple ways to make low ceilings look taller, here are some great ways that don’t involve changing the structure of your home.

Paint the ceiling with a high-gloss paint

A fresh coat of paint on the ceiling will help the room appear brighter and more open. Since this is the problem with low ceilings, painting them a light color will fix it. Use high-gloss paint to reflect the light in the room, making it feel more open.

It is also recommended to paint the ceiling the same color as the rest of the walls. This will give the illusion of never-ending walls, helping the room appear to be longer. In this case, you should paint the walls and ceiling a bright color such as white or light gray.

The lower your furniture sits, the longer the space between it and the ceiling will appear. This will make the ceiling look further away from the top of the furniture. The other benefit of short furniture is that it might let more natural light, as fewer furniture blocks any windows.

Similar to low, horizontal furniture, long curtains will fool the eye into thinking the wall is longer than it is. Curtains that stretch from the ceiling to the floor will seemingly elongate the room.

Again, the goal here is to make the room appear bigger than it is. A large mirror expands the space and reflects the ceiling, giving the illusion of space.

When a ceiling light is on, it immediately and starkly shows exactly how high the ceiling is. Instead, use wall sconces, floor lamps, or table lamps to give the appearance that there is a lot more wall above the light.

Hanging frames that are tall and vertical oriented will draw the eyes upwards. Short, wide frames and decorations will make the room look short and wide, emphasized by a short ceiling. Though not attractive in every situation, using vertical stripes on the wall gives the illusion of height.

However, high ceilings might be worth the extra costs. High or vaulted ceilings are considered luxurious and help make the room feel more open and airy. They also give more flexibility for each room. Higher ceilings mean you can install crown molding, tall windows, or low-hanging light fixtures.

Have high ceilings and are wondering how to decorate them? Check out “How to Decorate A Room With High Ceilings!”

Rooms with higher ceilings are tougher to heat and cool than rooms with lower ceilings. The more space that needs to be heated or cooled, the more energy is required. Another challenge when trying to heat or cool rooms with high ceilings is that heat naturally rises to fill the available space. If the ceiling is high, the heat will rise farther away from the ground-level, where the people are. This means that a room with ten foot or higher ceilings will require more heat for it to be felt by those sitting in the room.

Even though the standard ceiling height is nine feet, this might be different depending on when your home was built and in which room the ceiling is located. Your second story might be eight feet tall, which is common.

If you’d like to make your ceilings appear taller, there are some decorating tips to follow, such as using vertically oriented decorations, painting the ceiling with a light, high-gloss paint, and avoiding overhead lighting.

What Color Night Light Is Best For Babies?

How To Paint A Roll Up Garage Door [9 Simple Steps]

How To Hide Electrical Cords In The Living Room?

How Deep Are Bathroom Sinks?

Kitchen Island Vs Breakfast Bar – Which Is Better?

Can You Put A Metal Roof Over Wood Shingles?