Color helps convey or create moods and messages in therapy. Many have taken a step further by putting different color bulbs on their porches as a silent prayer, request, or in solidarity. So, what does a blue porch light mean? We researched thoroughly and got meaningful answers.

You might be wondering what autism has to do with the blue color. Continue reading to find out how this color became a symbol for autism and law enforcement. 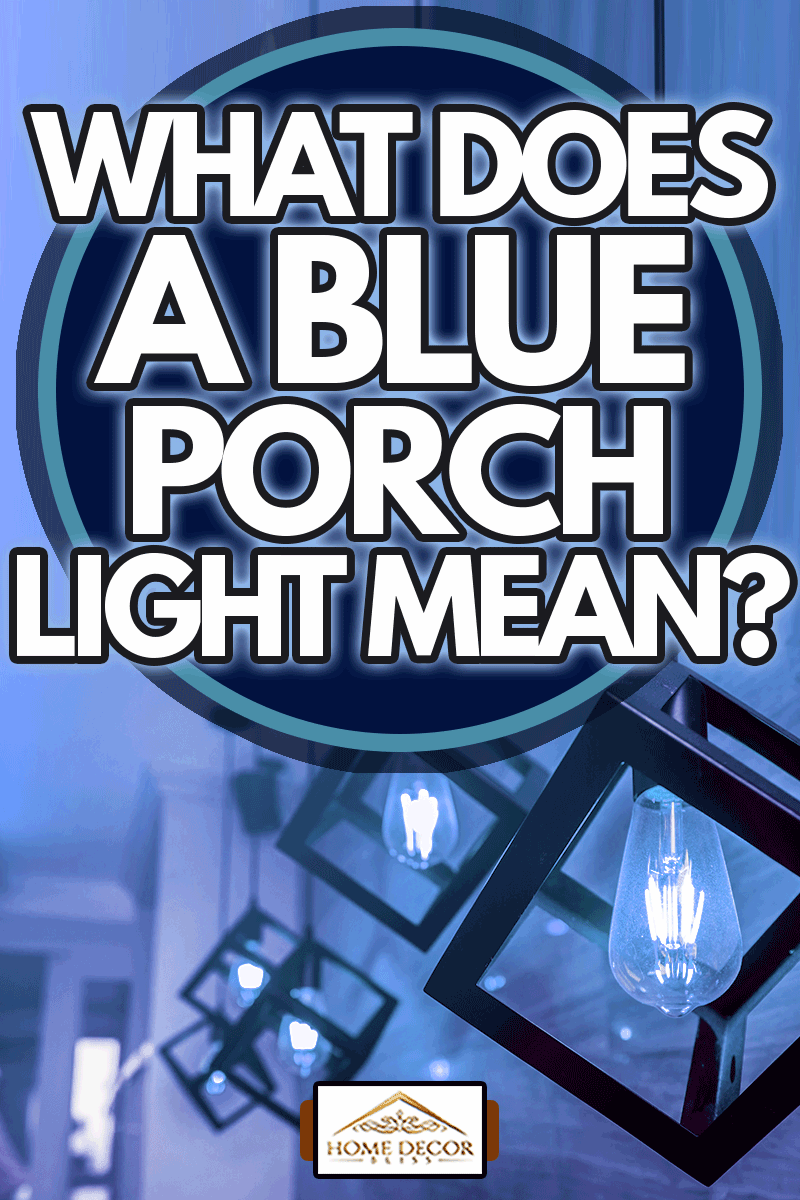 A blue porch light symbolizes support for those struggling with Autism Spectrum Disorder. The blue color is also used to support police officers in their service to the community.

We're going to talk more about the meaning of the color blue - on front porch lights, and just as a color. After all, if you choose to light your porch blue, it can have a significance that could go beyond social conventions.

Before we discuss the meaning of blue porch light in more detail, we want to invite you to consider other colors and their meanings too.  Check out our ultimate article: What Does The Color Of A Porch Light Mean?

We'll also link to other porch lighting colors at the end of this piece, so make sure you keep on reading!

Blue represents the sea or sky. Generally, blue stands for openness (like open spaces), freedom, and sensitivity. Sometimes, blue is associated with intuition, imagination, or inspiration.

Other studies show that blue symbolizes wisdom, depth, trust, loyalty, and sincerity. Whichever shade of blue you might choose for your home decor or wardrobe might be viewed as a sign of stability, faith, intelligence, or confidence. 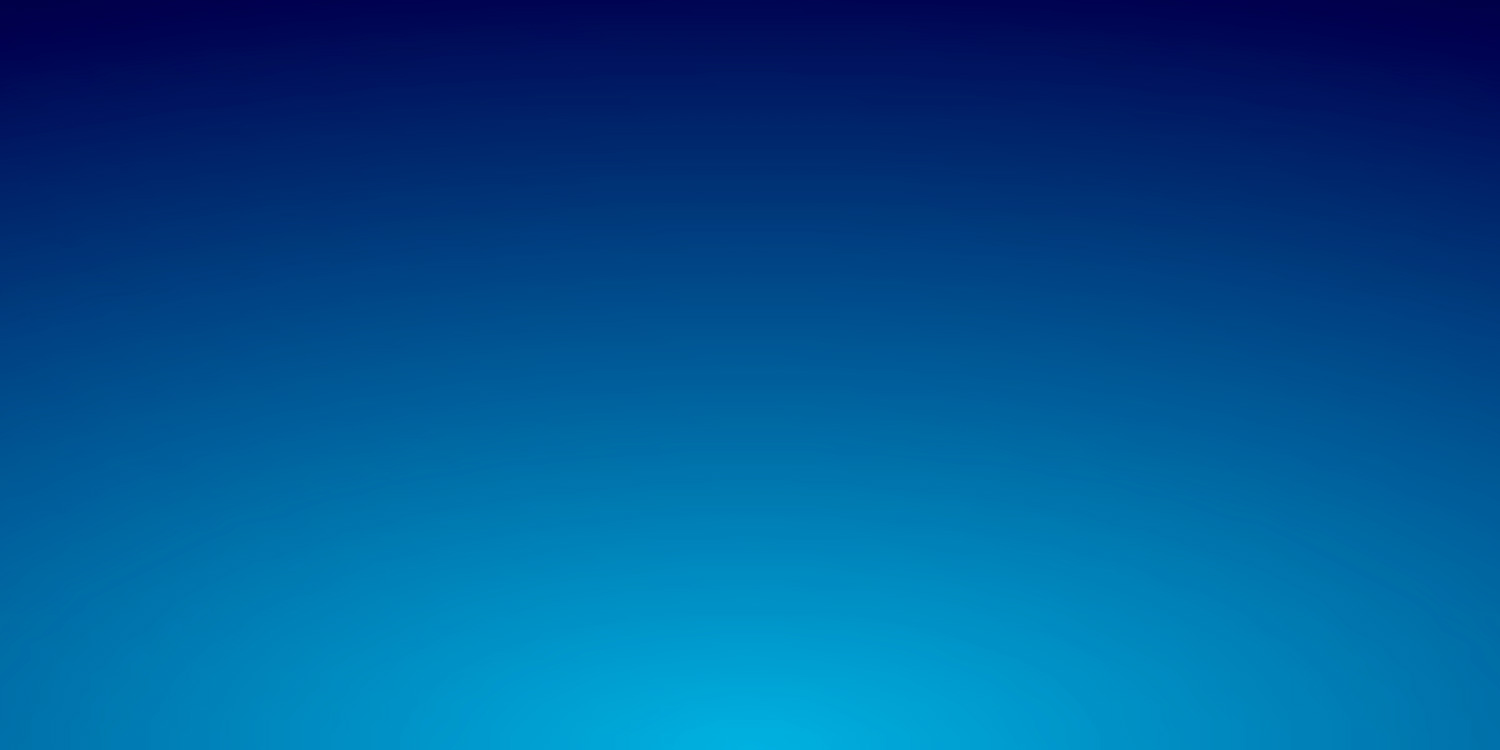 Blue has a wide spectrum and can be darker or lighter depending on what shade or color has been added.

The blue porch light movement started in 1989 with Dolly Craig. She lit a blue light and placed on it her window to honor her son-in-law, who had died in the line of duty.

The blue porch light is now widely used to honor police officers, firefighters, and members of the armed forces and their families. It is a way of showing solidarity and gratitude for their service.

Have a look at this porch lantern on Amazon

The organization known as Autism Speaks also adopted the blue color to create awareness of this disorder. Homeowners use blue porch lights to support those struggling with Autism Spectrum Disorder.

Check out these dimmable outdoor lights on Amazon

When Can You Turn On Blue Lights On Your Porch

In May, you can light blue porch lights to honor law enforcement officers. Officially, May is the month set aside for Project Blue Light. Residents can also tie blue ribbons to their lamp posts or mailboxes.

On the other hand, the UN set aside the 2nd of April for the Light It Up Blue campaign to create awareness of autism. Many homeowners light up blue lights on their porches in solidarity.

What Does Blue Ceiling On A Porch Mean

It all started in the Southern states. The nature and history of these states played an important role in the story behind the blue porch ceilings.

It is believed that the blue porch ceiling wards off evil. The blue mimics the sea and sky which is supposed to deter evil from lingering or staying.

Blue porch ceilings are also believed to ward off evil and bring good luck. This belief lingers on today. Light blue is a cool color that also makes the porch a relaxing place.

Have a look at this light blue paint on Amazon

Does Blue Paint Keep Insects Away

In some instances, blue is believed to keep insects at bay. Wasps, spiders, and bees like to build nests in the eaves and porches.

Many homeowners believe that light blue porch ceilings trick the insects into believing it's the sky. The light blue paint seems to repel these insects. Experts attribute this effect to old blue paints containing lye.

Lye works as an insect repellant. Most homeowners would repaint their porches every five years or so, renewing the effect of the repellant. This strengthened the belief that the light blue porch ceilings could keep insects away.

What Do Flashing Porch Lights Mean

A blinking or flashing porch light could indicate an emergency. A homeowner could be trying to get help by drawing attention to emergency vehicles using a blinking bulb.

Emergency workers might have to work fast to rescue victims and don't have time to read addresses. A blinking porch light can effectively alert any emergency workers to indicate that you need assistance.

On the other hand, a blinking porch light could also indicate that it is faulty.

However, it's best to be sure that no one requires any assistance, so check on anyone with blinking porch lights for confirmation.

What Does Blue Light Do To You

Modern technology has overtaken our day-to-day activities. Blue screens have a combination of blue with high energy and high frequency.

Exposure to blue light especially from TVs, phones, or computer screens can disrupt sleep. The blue screens will strain your eyes and eventually affect your eyesight.

According to medical experts, continuous exposure to blue light affects the ability of the brain to adapt to changing situations. It also interferes with moods and causes hormone disbalance. These disorders might lead to depression.

A good way to avoid this is by switching to 'night mode' on your devices to reduce the blue screen effect.

Letters, morse code, emails, SMS, pigeons, and different color bulbs are used to convey messages. There are other colors used on porches apart from blue.

The 'Morse Color Code' is broad. It widens the color spectrum and helps others show support for other burning issues.

Homeowners can show sympathy or solidarity with other matters that might be close to their hearts. Here is a breakdown of other color porch lights and what they symbolize.

Red porch lights are used to show participation in heart health awareness. You could have the porch light in the form of a heart.

Green is used to honor veterans, as well as to create awareness of Lyme disease.

In October, you might notice orange porch lights. They are thought to be festive and act as decorations during the fall and Halloween.

Another porch light color that you might see in October is pink. Pink porch lights are lit to help create awareness for breast cancer. It is part of the Let Your Light Shine Campaign.

Why Are Blue Lights Popular For Backstages

Blue is a soft light and is hardly noticed during the day. Green and yellow tend to be the most noticeable colors. As such, blue lights are used in backstages for the actors and the crew to see properly.

However, these blue lights don't allow the audience in the theater to see anything backstage. The audience has day mode vision due to brightly lit stages.

What Are The Blue Lights Atop Traffic Lights

Law enforcement seems to have blue everywhere. Drivers might have noticed some blue lights on top of traffic lights, and wondered what they were all about.

These lights are used by traffic police officers to catch drivers who run red traffic lights.

What Does Blue Light In A Car Mean 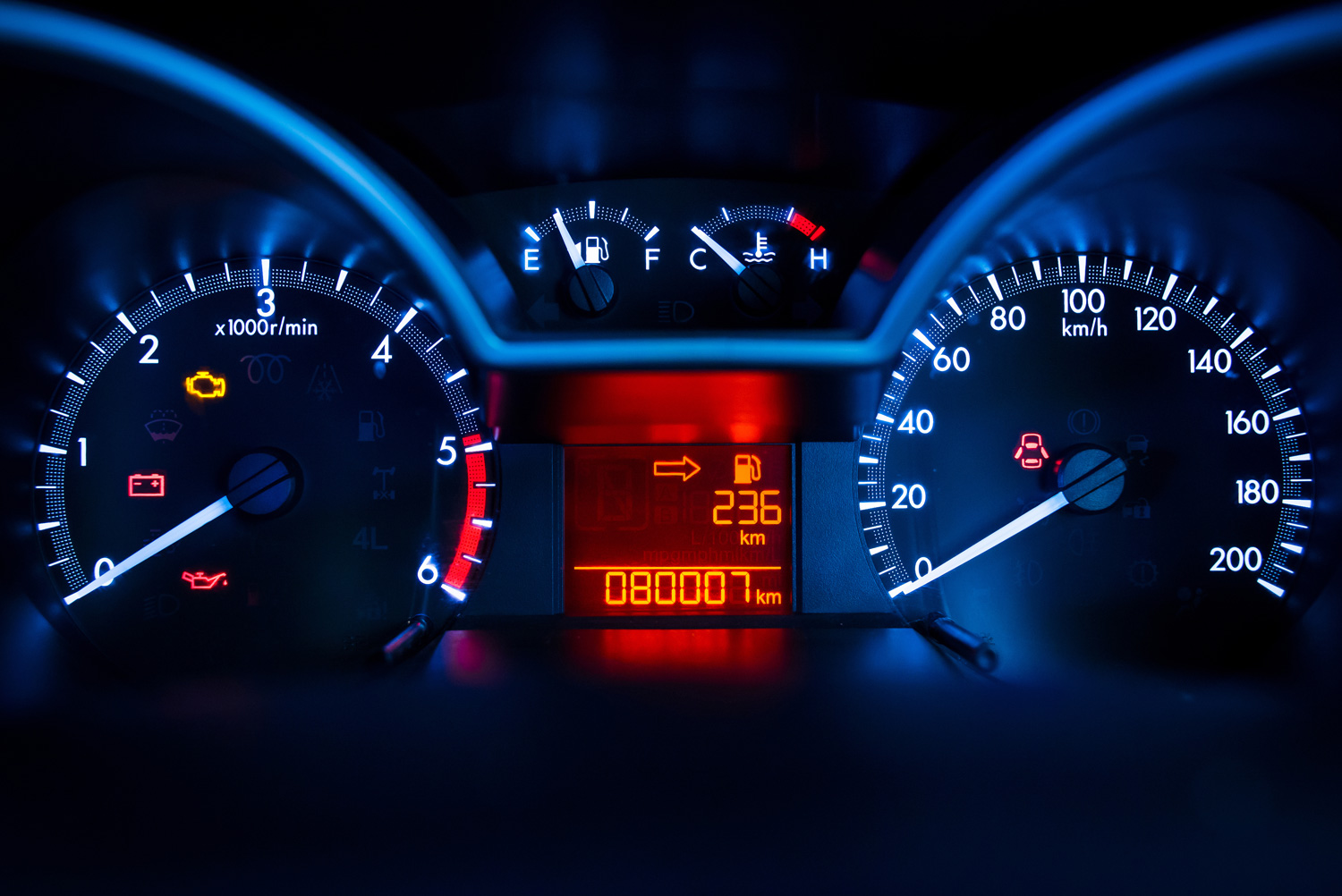 The blue light in a car indicates that the engine isn't warm enough. Drivers aren't allowed to drive until the engine has the optimal temperature.

The blue light on the dashboard doesn't stay on for long. It sometimes could if the temperatures are too cold.

Other Uses Of Blue Porch Lights

Scientists claim that insects see three colors only. Blue, UV, and green are the colors that seem to attract insects the most. Bright light or bluish porch or indoor lights pull insects to them.

The emission of blue color from mercury vapor tubes or fluorescent lights has a magnetic effect on bugs. It had led to manufacturers using blue lighting irradiation to kill insects.

The high wavelengths are detrimental to bugs and insects. This is an eco-friendly way to keep insects at bay.

Blue elsewhere on your porch

Why limit yourself to lighting? Your porch door could be blue too! Make sure to check out this visual guide: 15 Blue Front Door Ideas

Outdoor lighting has since developed and evolved from being used as security to being decorative. Naturally, porch lights have become a form of silent communication via symbolic colors.

Proper outdoor lighting can make your home beautiful whilst deterring burglars from your property. This kind of lighting can create a homey ambiance outdoors. 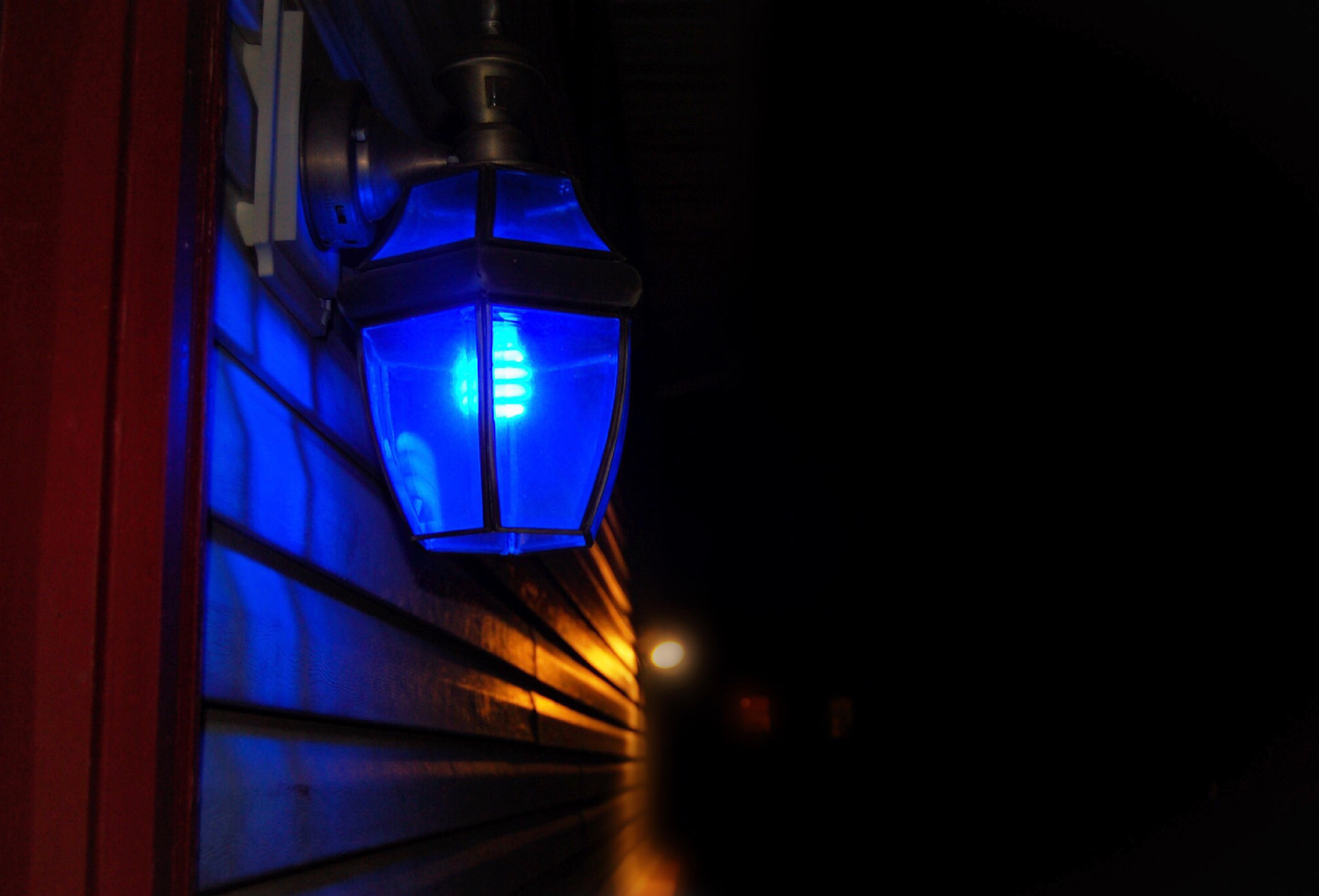 Blue porch lights have become very significant over the years. Other colors besides blue have become part of different awareness campaigns.

Blue is a cool and attractive color in its own right. There are many other significant uses of this color.

Whether you choose relaxing light blues or refreshing bright blues, you're sure to hit the mark in your home decor!