Do you like a more cohesive and attractive look for your bed? If you do, consider incorporating pillow shams as a part of your bedding. Pillow shams can be quite a beautiful addition to your bedroom decor, compared to relying solely on standard pillowcases. What a sham is and why it is necessary? We have researched to find out all about these fantastic items. 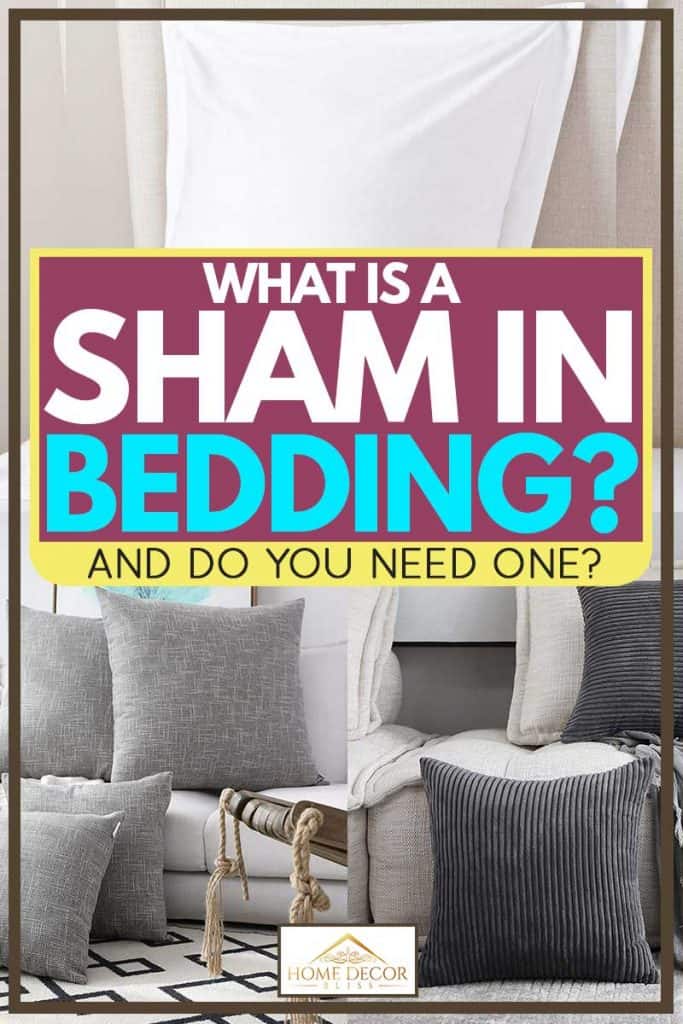 A sham in bedding is used as a protective and decorative cover for a pillow, which keeps unsightly stains, dust, and debris out of sight. Additionally, shams are decorative on the front and back, usually with a pattern or design that matches a duvet for a bedroom set. Pillows can be covered with a sham and arranged at the head of a bed so that a bedroom has a delightful and aesthetically pleasing presentation. When it is time to retire for bed, the shams can be removed from the pillows.

Are you curious about how to incorporate shams into your bedding? Keep reading for details on how to use pillow shams!

A History in Bedding Decor

In the 1700s, shams were created as a removable decorative "false front" to cover standard pillows. When a pillow is placed into a sham, it is transformed into a decorative pillow. Compared to a standard pillowcase, a sham has an open back that consists of overlapping flaps, has a buttoned back, or a zippered back. Shams are usually sold in pairs and come with an accompanying duvet that matches in style and color.

Instead of using throw pillows, regular pillows are encased in shams. Plus, it is easy to remove a sham from a pillow and throw it into a washing machine for maintenance. It is okay to sleep on a sham-covered pillow, but usually, cushions encased in shams are placed behind standard sleeping pillows at night. During the daytime, when a bed isn't being used, sham-covered pillows are placed at the front for decorative purposes.

Why Is It Called A Pillow Sham?

The dictionary likes to define the word sham as being "something that is not what it purports itself to be" or "a spurious imitation." Shams in bedding imitate the decorative throw pillow, disguising standard pillows once they are slipped inside their embellished case. The sham was created to cover standard pillows for sleeping, consisting of a case with an opening in the back that is buttoned, zippered, or uses overlapping fabric. Shams can be readily taken off or put on a pillow whenever needed, and they elevate the look and feel of pillows and accompanying bedding.

Unlike a pillowcase that is made for sleeping and covering pillows, shams have a purely protective and decorative purpose. Due to the fabric weight for a sham, compared to a pillowcase, it might not be ideal or comfortable to sleep on a sham.

What is the Difference Between a Pillow and a Sham?

Pillows are cushions that may be used to throw on a couch or accent chair. Often, pillows are found on beds so that people may place them under their heads for sleeping. Body pillows are extra-long for stomach sleepers, and some pillows are used to elevate the neck, hips, legs, or feet to correct posture and improve blood circulation for health.

A sham is not a cushion like a pillow, but it is a decorative cover meant to disguise a pillow. Shams come in pairs with an accompanying duvet.

Check out this sophisticated white pillow sham set on Amazon.

How Do You Use a Sham?

A sham is slipped over a pillow and placed for visual appeal atop a bed. Sham-covered pillows are placed in front of or behind standard pillows encased in pillowcases at the head of a bed. Putting pillows in shams helps keep pillows clean and safe from kids, pets, and makes a bed look good. A set of shams paired with a duvet help tie-together a bed's overall look for aesthetic value.

A sham can be easily put on or removed from a pillow and placed in the wash if needed. A sham is for mostly decorative properties and enhancing the look of a bed. Adding pillows covered in shams looks best on a queen or king-sized bed, adds height to the head of a bed, and gives a bedroom a luxurious, royal treatment.

What is a Sham Blanket?

The type of blanket that accompanies a set of shams is usually called a duvet. A duvet or a sham blanket is a thinner version of a comforter, which is warm but mostly for decorative purposes. Compared to a comforter, a duvet is a flat bag that is filled with down feathers or synthetic fibers to retain heat and softness. If you place a duvet on a bed, you usually don't have to sleep with extra sheets or a blanket, as the duvet suffices.
Sometimes a sham blanket is nothing more than a duvet cover, which has room for a comforter to be slipped inside. Similar to a pillow sham, a sham blanket is a decorative cover that has space to place a blanket inside to make a bed look attractive. Duvet covers can be removed and washed.

Check out this classy duvet cover set on Amazon.

What is a Euro Sham for a Bed?

A Euro sham is an ornamental form of pillow cover that is in the shape of a 26 x 26-inch square. Some Euro shams may come in size 32 x 32 inches in size, but 26 x26 inches is the standard. Similar to a sham that is meant to cover a standard-sized sleeping pillow with a decorative cover, a Euro sham is intended to do the same.

Euro shams cover pillows which are placed against the headboard behind a set of standard pillows, or they are placed at the front of a bed with standard pillows behind them. The whole point of a Euro sham is to increase the comfort and visual appeal of a bed. Euro shams enhance the look of a bed and pillows instead of resorting to using throw pillows. A pillow encased in a Euro sham can serve as extra support for the head or back when reclining in bed.

Check out these beautiful grey Euro shams on Amazon.

What Kind of Pillows Do You Use for Shams?

Standard sized pillows for either a twin, queen, or king-sized bed can be placed in shams. Cushions that are square in size and measure 26 x 26 inches are applicable for a Euro sham. Ideally, the best type of pillows to use in a pillow sham or overstuffed with down feathers or they may have a generous amount of synthetic filling. Cushions placed in shams should be plush, comfortable, and give a feeling of opulence. A pillow encased in a sham should be hefty enough to support itself and fill out a sham well for visual appeal.

Check out the types of throw pillows before buying one!

Should You Sleep On Pillow Shams?

Depending on the style and texture of a pillow sham, it may not be comfortable or wise to sleep on the pillow and its encasement. A sham disguises a pillow, keep it clean, and bolster the attractiveness of a bed. It is possible to sleep on some pillow shams if you wish, and a sham can be easily removed from a pillow and placed in the washing machine for maintenance.

Check out this crisp, white Euro sham on Amazon.

What's the Difference Between Pillow Shams and Throw Pillows?

A throw pillow is in a cover that cannot be easily removed for laundering, is usually small or odd-sized, and is used for decorative purposes. A pillow sham is a decorative cover that can be removed or slipped over a pillow to enhance a bed's visuals, and tie together the look of a bedroom. Throw pillows may be one-offs and not come in sets, but make for great accents to furniture like beds, couches, and chairs. A pillow sham is used mostly for beds, comes in a pair, and retailed with a matching duvet in color, style, or theme.

Check out this fine linen pillow cover on Amazon.

How Do You Care for Pillow Shams?

A sham is useful for supporting the head, neck, and back when not sleeping but in the bed. When not using a bed, shams serve the purpose of making a bed look aesthetically appealing. Since shams are a considerable investment in the look and treatment of a bed, it is advisable to hand-wash pillow shams to ensure their longevity and texture. Some shams are made with texture at the forefront, with delicate decorative embellishments that must be treated with utmost care. Yes, it is possible to throw a sham into the washing machine, but it may be better for a sham to be washed gently via hand and hung dry until its next use.
Buy pillows online! Click here to know the best stores!
Click here to cancel reply.