When purchasing new bedding, do you find yourself confused over the difference between a comforter and a duvet? Which one is warmer? Is one softer than the other? Are they the exact same thing with different names? These are all common questions when it comes to duvets and comforters. There are similarities and differences between those two that should influence what you purchase. We've put together information to help you make the best decision for your bed.

Both duvets and comforters are fluffy quilts used for bedding. However, a duvet is meant to be covered and a comforter is created with a built-in cover.

Although duvets and comforters seem fairly interchangeable, there are some differences that set them apart from one another. Let's take a look at the similarities and differences between the two to make sure you're choosing what's best for your perfect night of sleep. 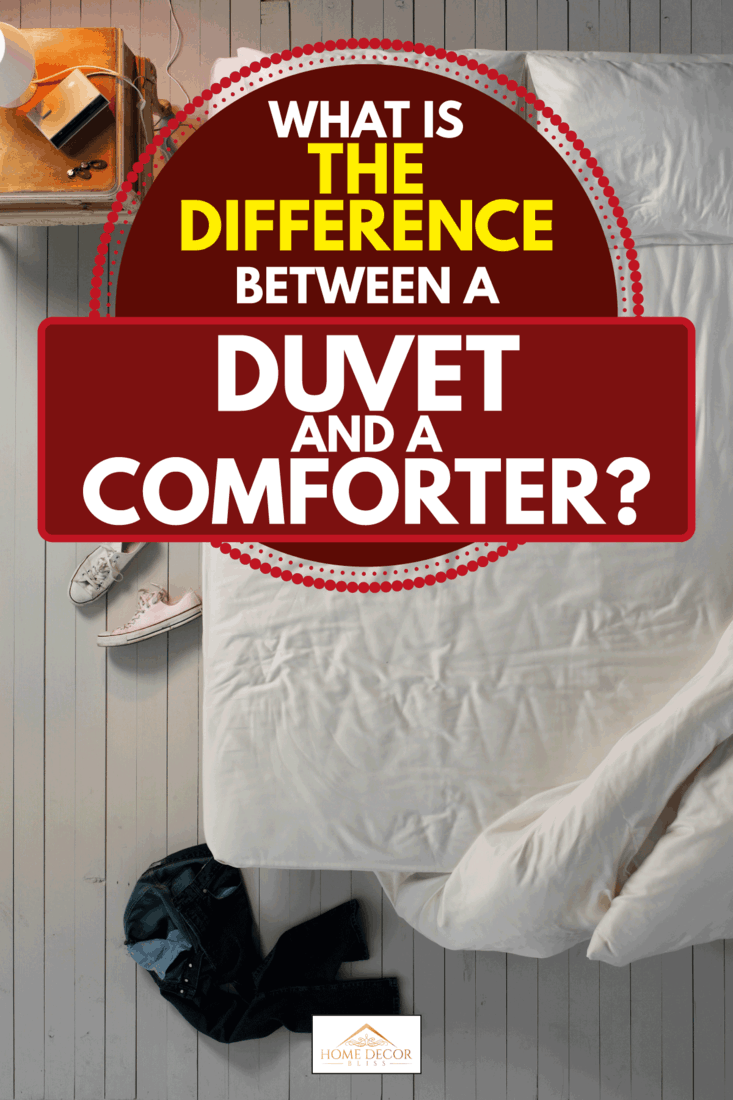 A Duvet Versus A Comforter

A good place to start is gaining an understanding of the similarities between these two. Both a duvet and a comforter are soft, fluffy bedding. They are both typically filled with goose down, feathers, cotton, or synthetic materials. Duvets and comforters are also all-seasons. This means they can be used as bedding year-round. 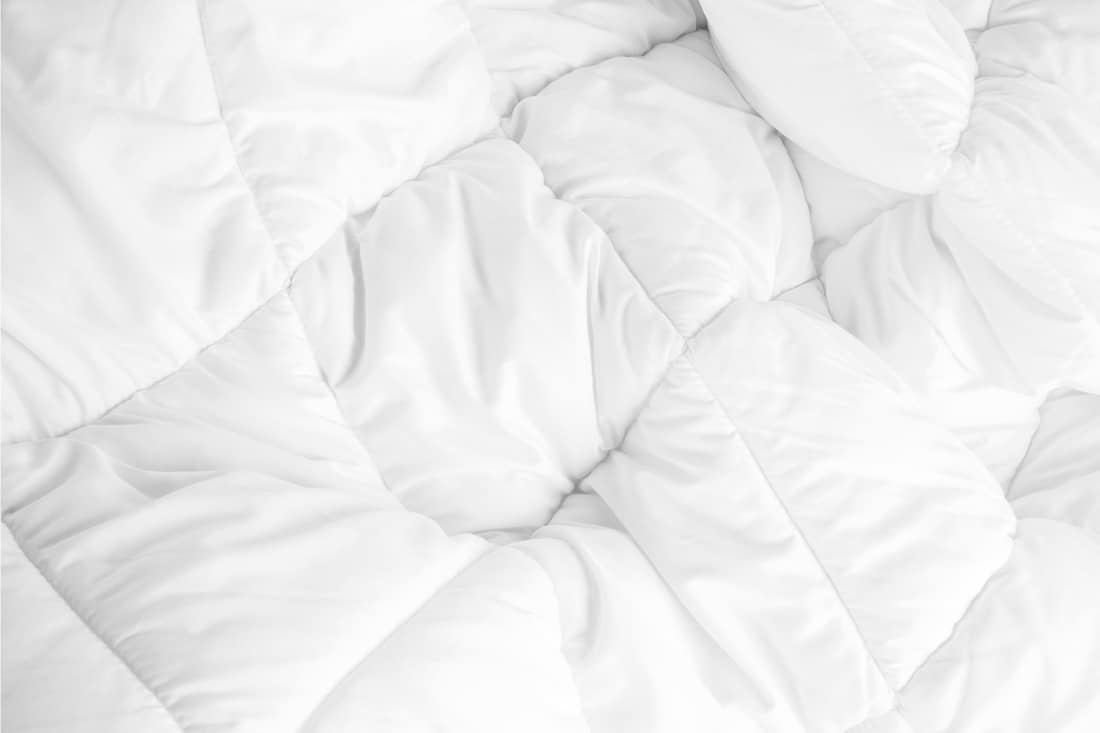 When looking at the design of both comforters and duvets, they will often have similar stitching patterns. A boxed or diamond stitch across the entire blanket, creating that quilt look, actually serves an important purpose. This stitching keeps the materials evenly distributed. If this stitching is missing, you can expect your filling to slide and bunch on one side, becoming uneven. 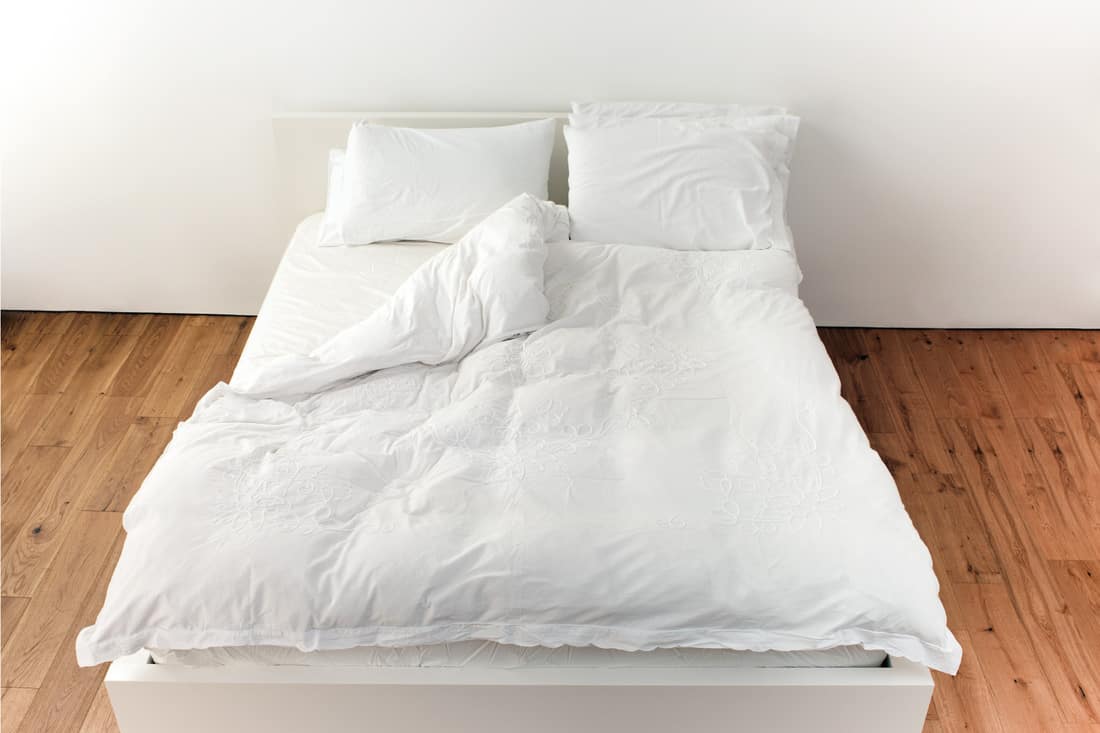 Duvets are inserts made to be placed into a duvet cover. This is essentially a pillowcase for your duvet. This cover is meant for sleeping "European Style," or without a top sheet.

The duvet cover acts as a hygienic barrier between you and the duvet, making this the easier clean of the two. You simply remove the insert from the cover and throw the cover in the wash. Although you do want to wash your duvet, you can wash it less frequently when it has a cover. 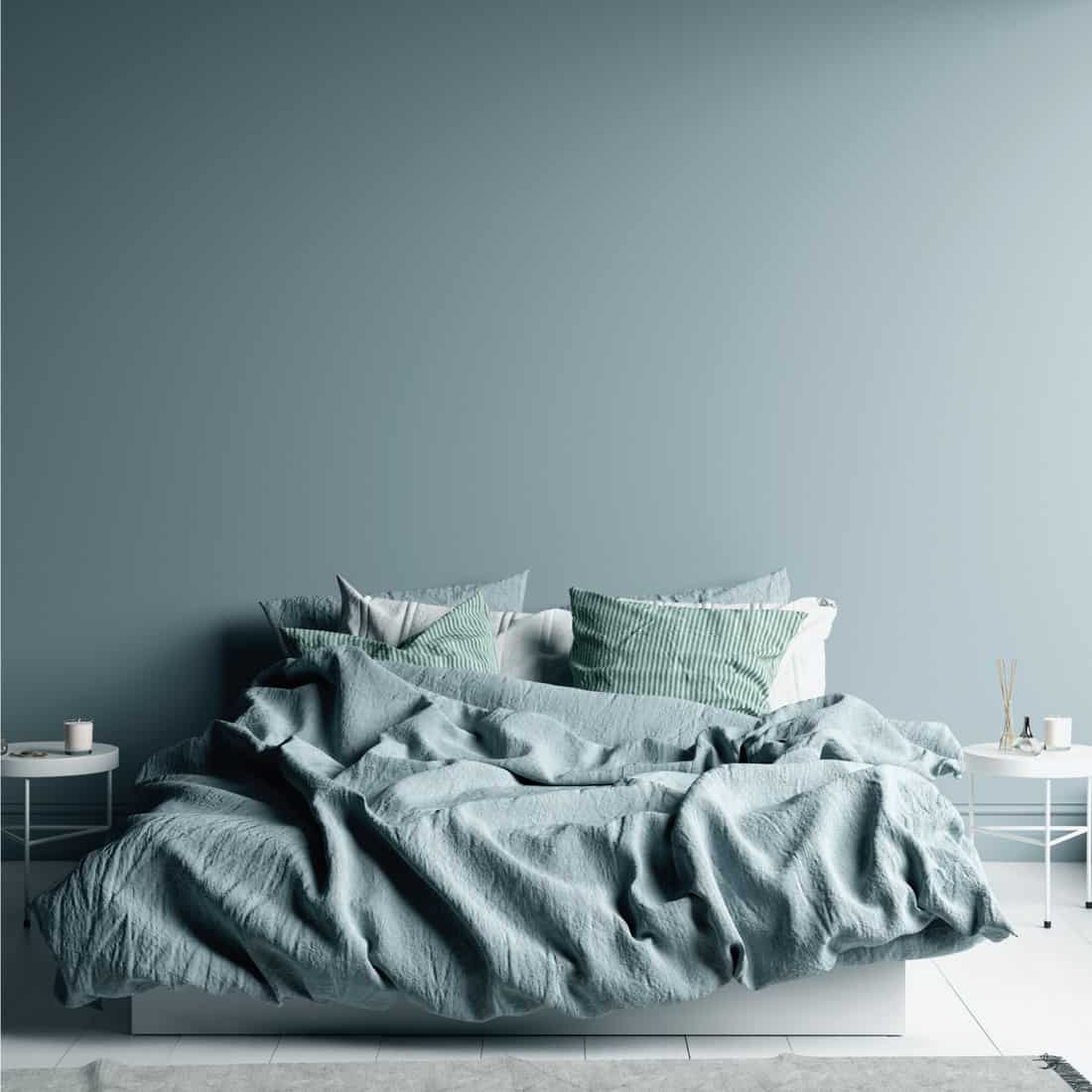 Duvet covers are also ideal for those who love change. Covers come in a wide variety of colors, patterns, and designs. When you're looking for something new, you can purchase a new duvet cover and move the insert to the new cover. It's much less expensive than purchasing a new comforter or bedding set.

Click here to see this duvet cover on Amazon.

Duvets are generally smaller in size than a comforter. This doesn't mean that they won't fit your bed, just that there will most likely be less overhang. So if you like a larger, draped look on your bed, you could consider sizing up.

Whichever size you choose, know that it can be a cumbersome task inserting your duvet into the cover and getting the duvet evenly distributed.

When looking for a duvet, choosing the right material will be your first decision. For an all-season, soft and fluffy duvet, goose down is top-notch. Next, you will want to choose your desired weight. For hotter climates or those who sleep warm, lightweight would be best. If you sleep cold, a heavier weight duvet would keep you warmer. However, a safe bet is always a medium-weight duvet.

Click here to see this duvet insert on Amazon. 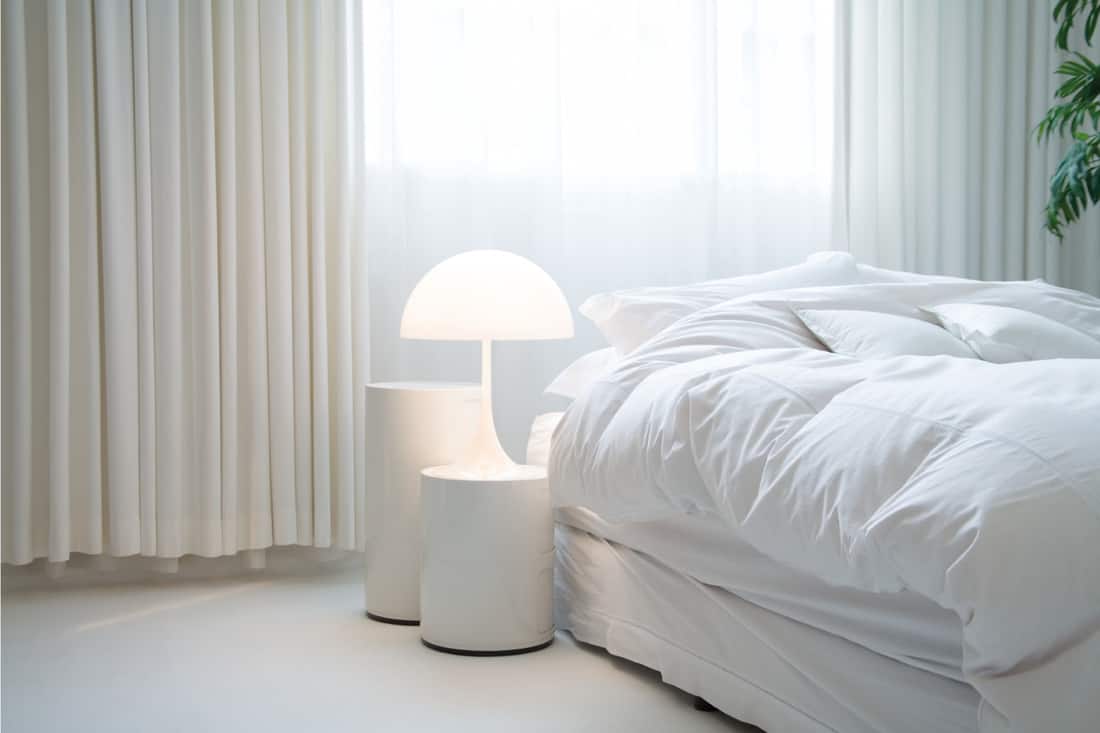 If the duvet and cover are the "European Style" of sleep, then the comforter and top sheet is the American version. Comforters already come with a cover built-in, so in order to have their own hygienic barrier, comforters are meant to be used with a top sheet.

If you're using a top sheet, you may not feel the need to wash your comforter as often as you would your sheets. However, it's becoming increasingly more common for adults to ditch the top sheet, meaning you should be washing the comforter often.

Cleaning a comforter is definitely more work than a duvet cover. Since they're heavier and larger, drying can take longer with the constant need to reposition the comforter. If you need to wash it because of dirt or a stain, you can't just take off the dirty part, like a duvet cover, and toss it in the washer.

Comforters come in many patterns and designs, and usually part of a bedding set that will provide matching sheets and pillowcases as well. If you enjoy choosing bedding and keeping that style for a long time, then a comforter could be for you.

You will most likely find a similar comforter version of any duvet cover. However, duvets do make it easier for simple bedding switch-ups, if that's something you like to do more frequently.

You can expect a comforter to be larger than a duvet. This allows for more coverage over the sides of your bed. Comforters can also be thinner than a duvet, however, this will ultimately depend on the filling.

Comforters are often selected based on their design. When choosing a comforter, it's usually with the purpose of fitting a specific style you are searching for.

Much like choosing a duvet, you can look at the desired materials and weight to find the right fit for you. Down is still going to be one of the best options as it will keep you warm in the colder months but is breathable and lightweight enough for warmer months as well.

Can You Use A Duvet For A Comforter?

If you're using a duvet as a comforter then it really just means you are using the duvet without the cover. It's quite common to sleep with just a duvet. Especially when looking for a simple white, box stitched, down comforter, "duvet" will also be in the description. So there are instances when they are made to be interchangeable.

As long as you're comfortable sleeping with the weight and material of the duvet, then you can absolutely use it without a cover. Just consider using a top sheet with the duvet to keep from frequent washes.

Is A Duvet Heavier Than A Comforter?

Generally, yes. Unless you are looking for a specific weight of a comforter, then comforters do tend to be lighter than a duvet. Still, you have weight options when choosing a duvet. Even the heavier duvets will still be relatively lightweight due to their fluffier material.

What Do You Put Inside A Duvet Cover?

A duvet cover is meant to be used with a duvet. Duvets are generally white, and covers come in many colors and patterns, much like a comforter.

Click here to view this duvet cover set on Amazon.

How Do You Make A Duvet Look Fuller?

There's nothing more inviting than the look of a full and fluffy bed. But it's common for duvets to eventually fall a little flat due to frequent use, making your puffy bed look a bit drab. Thankfully, there are ways you can achieve a full and fluffy looking duvet, even with frequent use.

Duvets begin to look flat when the filling bunches and clumps, causing them to compact instead of expanding and allowing air to flow through the fibers. So if your usually thick duvet is looking a bit lackluster, it may just need a good fluff. There are two straightforward ways you can do this: with your hands or with tennis balls.

For minor fluffing, you can knead and pull at the duvet to loosen up the fibers on the inside. Using your palms or fingers to break up the clumps will help them distribute more evenly. 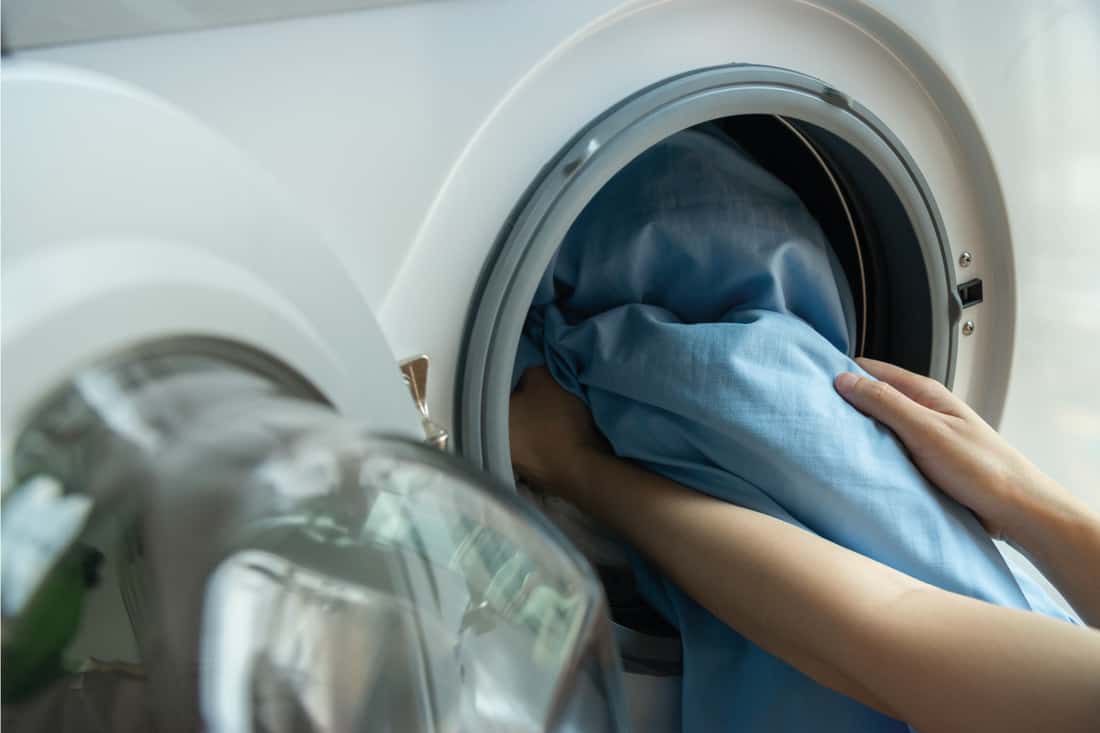 If you need a major re-fluff, you can put your duvet in the dryer with a few tennis balls. As the dryer spins, the tennis balls will work out those bunched up fibers a lot faster than your hands could.

Make sure that every 20 minutes you are taking the duvet out and repositioning this so you avoid potential scorch marks from the dryer. You may also want to put the tennis balls inside clean white socks so you avoid any transfer of color onto your duvet. 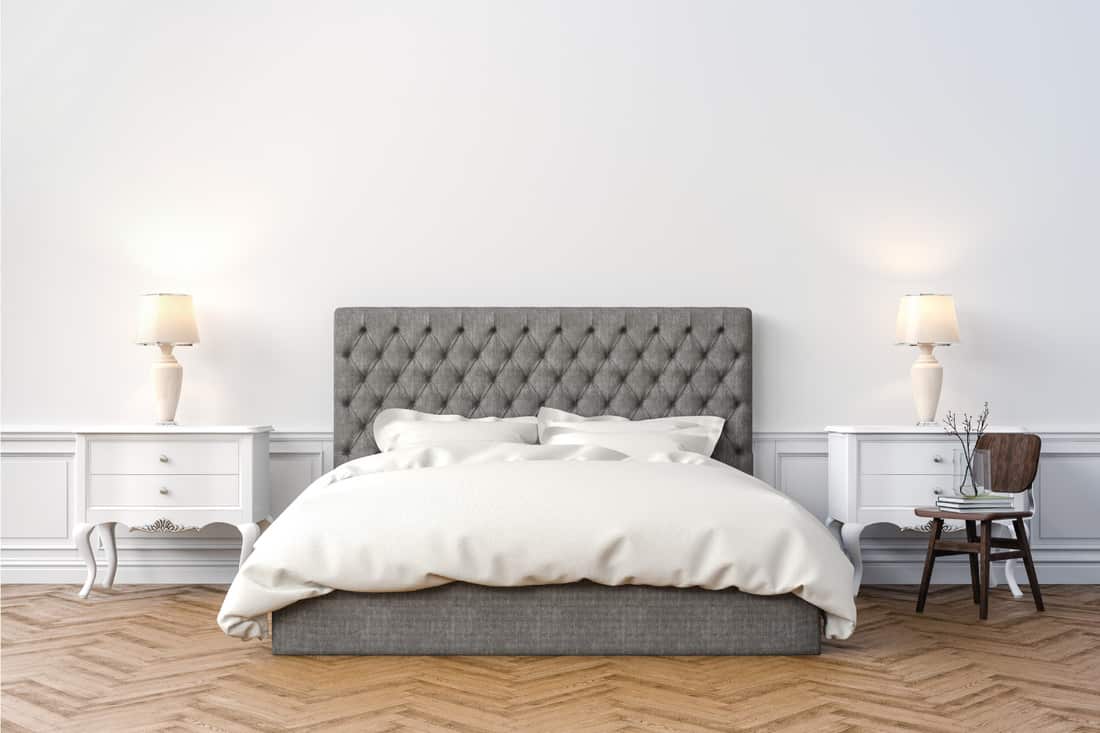 One way to make your duvet look fuller is to use a duvet that is a size bigger than your bed. When making your bed, lay the duvet and cover flat over your bed, then fold the top a fourth of the way down the bed. This will add volume to your duvet.

You can also fold the top of the duvet back in on itself, creating a "z" fold. Just add pillows in varying sizes and a throw blanket or two and you have the fluffy bed of your dreams.

Can You Put A King Comforter In A Queen Duvet?

Another way to make your duvet look fuller is by putting a size larger duvet than the cover. For instance, stuffing a Queen duvet cover with a King duvet insert will fill out the cover making your duvet look puffy and soft.

You can also achieve this by putting two thinner duvets into one cover. Just be sure that they are light enough that you won't be making yourself overheat at night.

Although duvets and comforters hold a lot of similarities, choices such as design or ease of cleaning can help you determine which option is going to bring you a soft and comfortable night's sleep.

Curious how much a duvet is going to cost you? Check out this post for some insights for your next purchase: How Much Does a Duvet Cost?

Or you can check out this post to read up on the different types of comforters you can choose from: 16 Different Types Of Comforters