If you're like most, you probably don't give much thought to the way you hang your wet towel after showering. After all, it's just a towel, right? Truth be told, wet towels can be a significant contributing factor to a musty-smelling bathroom, so it's important to hang them in a way that maximizes airflow. But where (and how) should you hang wet towels after the shower? For your convenience, we brought you the answer.

After showering, it's best to hang your wet bath towels spread out as much as possible on a towel rack. This will expedite the drying process and help deter mold growth. What's more, it'll ensure that your towel is nice and dry the next time you need to use it.

If you still have some questions about where to hang wet bath towels, don't worry. In this guide, we'll discuss the topic in greater detail. We'll also talk about why bath towels tend to stink, what you can do to prevent it, and much more. Without further ado, let's get into it! 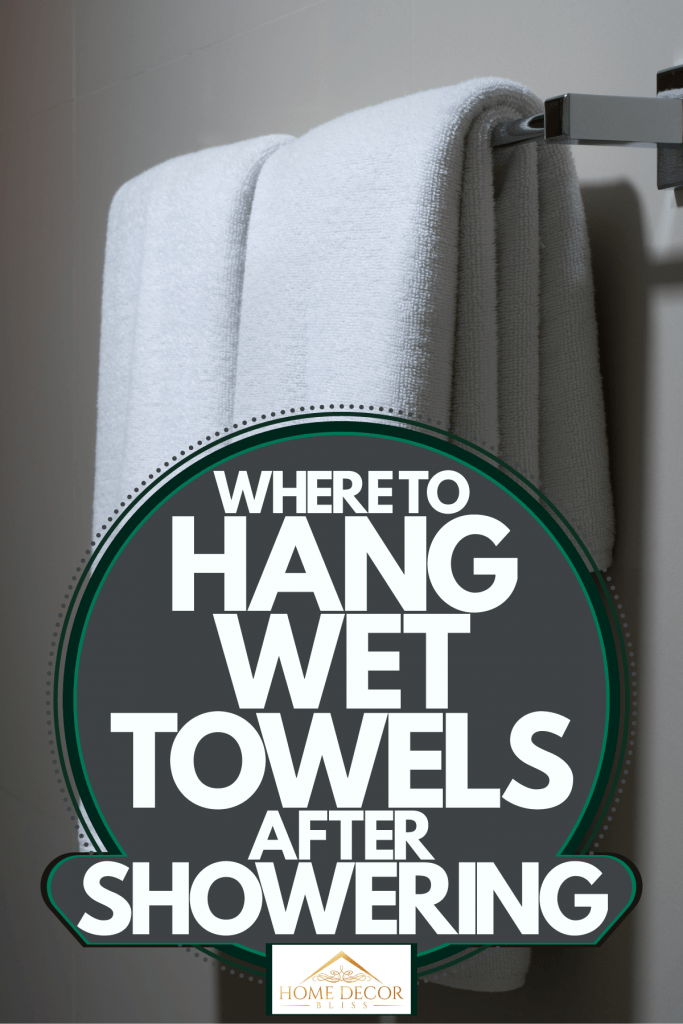 Wet towels in the bathroom are problematic for a couple of reasons. For one, they can quickly create a foul, musty smell (more on that later). In addition, if not hung properly, your towel will likely still be wet the next time you need to dry off, and nobody wants that.

As mentioned, the best thing to do with wet bath towels is to hang them over a towel bar, ensuring that the towel is fully spread out. This will maximize the amount of towel surface area exposed to the surrounding air, which will in turn expedite the drying process.

It's also a good idea to flip the towel around after a few hours to give the other side a little bit more exposure to the surrounding air.

To further expedite the drying process, turn on the bathroom exhaust fan. This will help remove some moisture in the area which will help wet towels dry more quickly.

Implementing these simple post-shower tips is a great way to keep your bathroom smelling nice and fresh.

Why Do Wet Towels Stink? 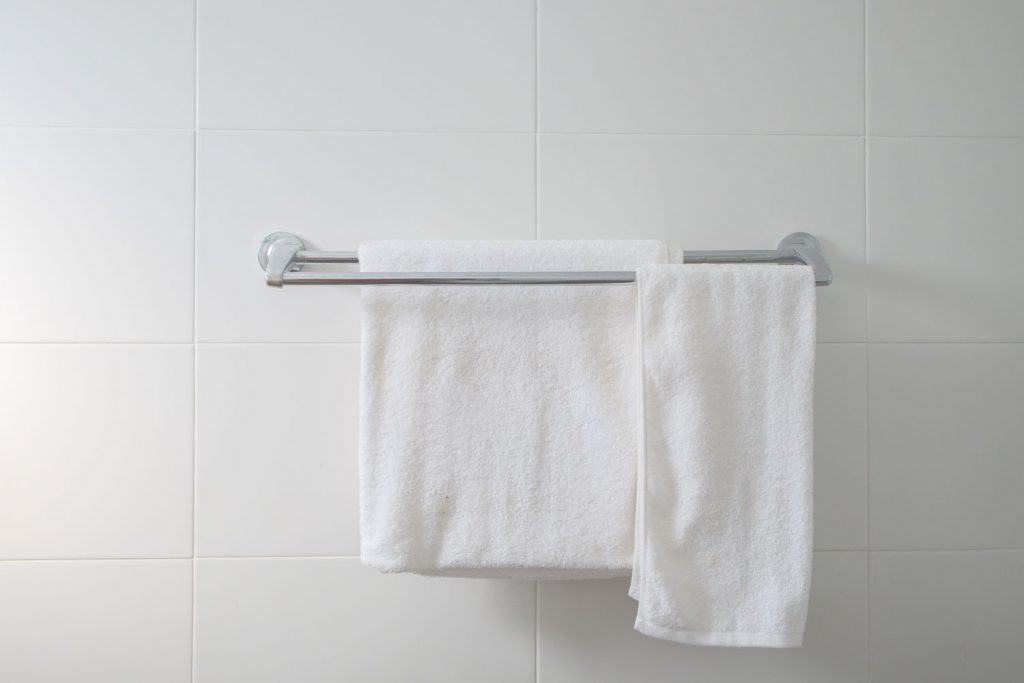 You're probably wondering why wet towels start to stink. There are actually several factors that contribute to the musty smell that bath towels start to give off. We'll discuss these different factors in greater detail.

Shower towels are used after we shower, so they should stay clean, right? In reality, regardless of how much we scrub in the shower, our bodies still give off debris (such as dead skin and body oil) when we dry off. So, after just a few uses, this leftover bodily debris starts building up on the towel, causing it to smell.

Not Hanging The Towel To Dry

Again, properly hanging bath towels is critical when it comes to drying time. If a wet towel is thrown on the floor or haphazardly draped elsewhere after use, it will quickly develop a foul smell, as the perpetual moisture will invite bacteria and mold growth.

Leaving The Towels In The Washing Machine

Should You Use A Towel Hook? 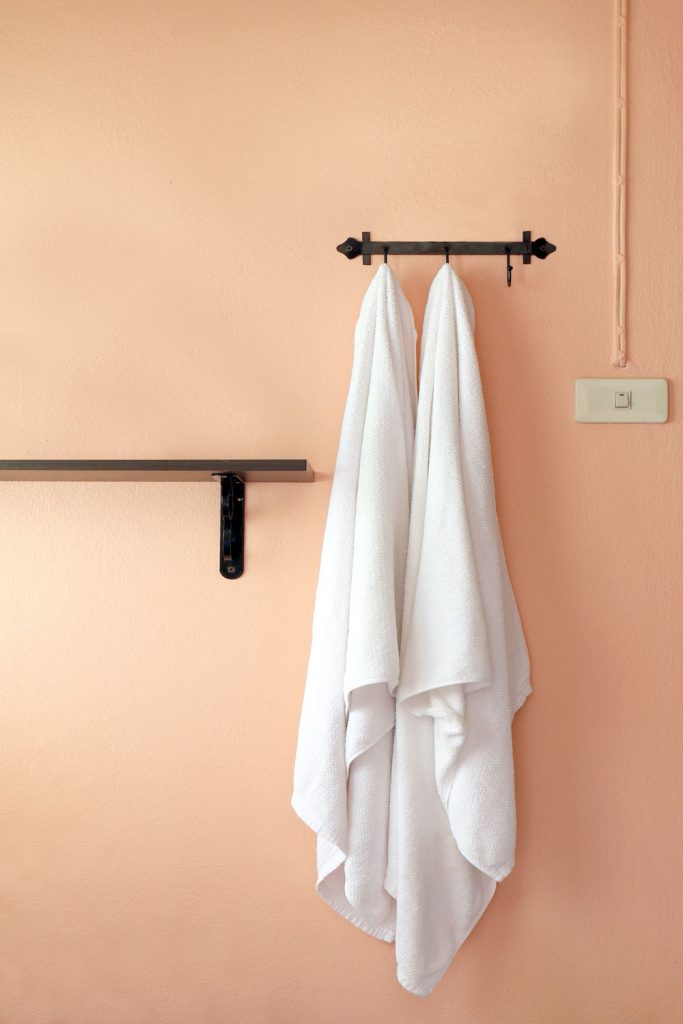 At this point, you might be wondering whether or not a towel hook is a viable substitute for a towel bar. After all, towel hooks are easier to install, and they have a smaller footprint. Simply put, a towel hook isn't a bad option per se, but a towel bar is by far the better option.

It all comes down to airflow and exposed surface area. When a wet towel is hung on a towel hook, it will take much longer to dry, as the layers of the towel will be closer together, which traps moisture and eventually creates a foul stench.

However, if you do decide to use a towel hook rather than a towel bar in your bathroom, ensure that only one wet towel is hung on each hook. Towel hooks are already less than ideal, so draping multiple wet towels on a single hook is definitely a no-no.

How Often Should You Wash Your Shower Towels?

The vast majority of people use bath towels until they are noticeably smelly (and sometimes even past that point). It generally takes a bath towel about a week to start smelling bad, but they should actually be washed well before that point.

It's best to wash shower towels after about three uses. This will keep them (and your bathroom) smelling nice and fresh.

How Often Should You Replace Your Shower Towels?

We discussed the ideal interval at which you should wash your towels, but there also comes a point when towels should be replaced altogether.

Obviously, the lifespan of a shower towel will depend entirely on how often it's used and washed. But in general, a shower towel should be replaced entirely after about two years, if not more frequently. If used daily and washed every few days, most shower towels will become thin and frayed and lose their absorbency around the two-year mark.

How Far Should A Towel Bar Be From The Shower?

There's no clear cut answer when it comes to the distance between the shower and the towel bar. However, the single most important factor to consider when determining towel bar placement is convenience. In other words, the towel rack(s) should be easily reachable from the shower.

Where Should Hand Towels Be Placed In A Bathroom? 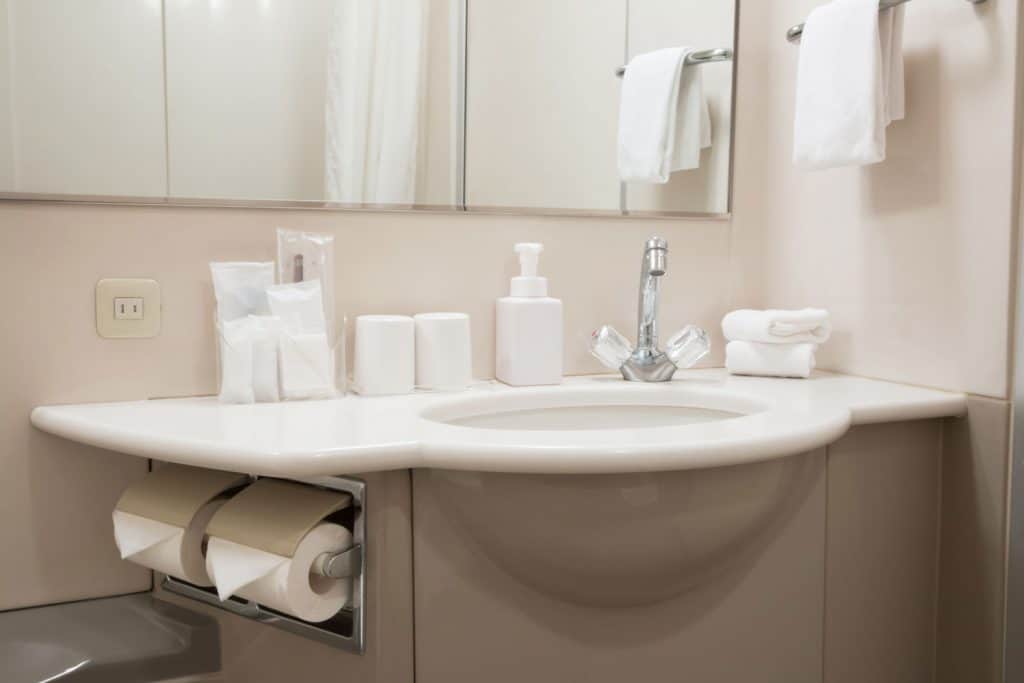 There is no set rule for the placement of hand towels in a bathroom. But as a general rule, it's best to place them somewhere in the immediate vicinity of the sink, whether folded neatly on the counter or hung on the wall by a towel ring or towel bar.

We hope this guide has helped you better understand the importance of properly hanging wet towels after showering. Taking the time to ensure that your wet shower towel is hung properly is a simple way to keep your bathroom smelling and feeling fresh!