Shower liners are a great first line of defense for keeping water in your tub. They help protect your main shower curtain from moisture and mildew. So, imagine this, you've purchased a new shower curtain and liner, you've hung up the curtain, but now you're wondering which way the liner should face. Well, we've done the research and have the answer for you.

When hanging a shower curtain liner, the side that is not smooth or shows "finishes" should face out of the tub. You can tell which side is smooth by looking at the liner's seams, labels, or grommets.

Now that we've given you the simple way to tell which side of the shower curtain liner faces out keep reading as we discuss some other ways you can tell if you've got it hung correctly. We'll also answer some other questions you might have about shower curtains and liners. 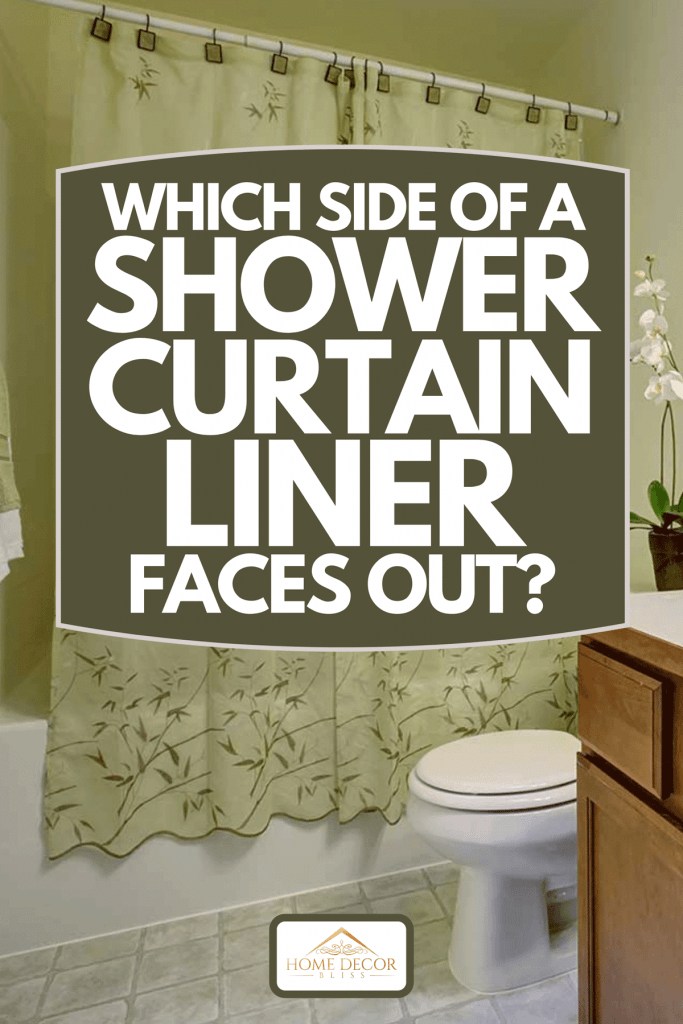 How To Know Which Side Faces Out

Shower liners are usually pretty simple. They come in white and clear with different levels of thickness. Because of their simpleness, it can be hard to tell which side of the liner faces out.

We mentioned above that the shower liner's non-smooth side should face out, but what does this mean? Many shower curtain liners will have a rough side and a smooth side. The smooth side needs to be inside the tub to allow for the most beneficial deflection of water. Though both sides will likely do the job, you want to keep the water in your tub as much as possible.

So how can you tell which side is which? The rough side will be the side that has labels or sewn edges. If your liner doesn't have any labels, look for seams towards the top of the shower curtain.

If you don't notice any labels or seams, look at the grommets where the shower curtain is hung. Grommets also have right and wrong directions. You should be able to tell which side looks the neatest. It will be smooth and round. This side should face inside the tub.

Do Shower Curtain Liners Go Inside Or Outside Of The Tub?

Whether the shower curtain liner goes inside or outside the tub depends on if you are taking a shower or bathing in the tub.

If you are taking a shower, you should keep the liner inside the tub. This will prevent water from running down the liner onto the floor. Your shower curtain should go outside of the tub, with the edge of your bathtub being sandwiched between the two. Many liners will have magnets attached to the bottom to help them stick to the inside of the tub.

If you are taking a bath, on the other hand, there's no need to keep your curtain liner inside the tub. As there's not a constant stream of water to worry about, there's no need for the liner to try and keep the water in the tub. Besides, it might make for an unpleasant bath time if you spend the whole time trying to avoid brushing against the liner.

If you're wondering whether the liner goes inside or outside of the tub because it keeps attacking you during your shower, check out our other article, Why Does My Shower Curtain Attack Me? [And how to prevent that], for tips on how to prevent this!

Is A Fabric Or Plastic Shower Liner Better?

If you're in the market for a shower liner, you might have noticed that there are both fabric and plastic liners available. So is one better than the other?  Well, they both have their pros and cons.

Plastic shower liners are cheaper and will get the job done. You can purchase them in most grocery or home decor stores for a few dollars. They are less susceptible to mold and mildew the way fabric liners are but will typically require replacing a fabric liner more often. Plastic liners are also not as aesthetically pleasing.

On the other hand, fabric liners are better looking than plastic liners but are slightly more high maintenance. At a somewhat higher cost, a good fabric liner will cost you around $15.  They are more susceptible to mold and mildew, so they require routine cleaning. However, cleaning fabric liners is much easier than cleaning plastic liners, as most are machine washable and can be thrown in with your laundry.

As you can see, which one is better depends on how you want your shower to look, whether you want to clean it more frequently, and the cost. You will need to replace a plastic liner more frequently, whereas if you keep up with your fabric liner's routine cleaning, it will last much longer.

They will both get the job done, so there isn't a wrong choice as far as effectiveness.

How Often Should You Replace Your Shower Curtain Liner? 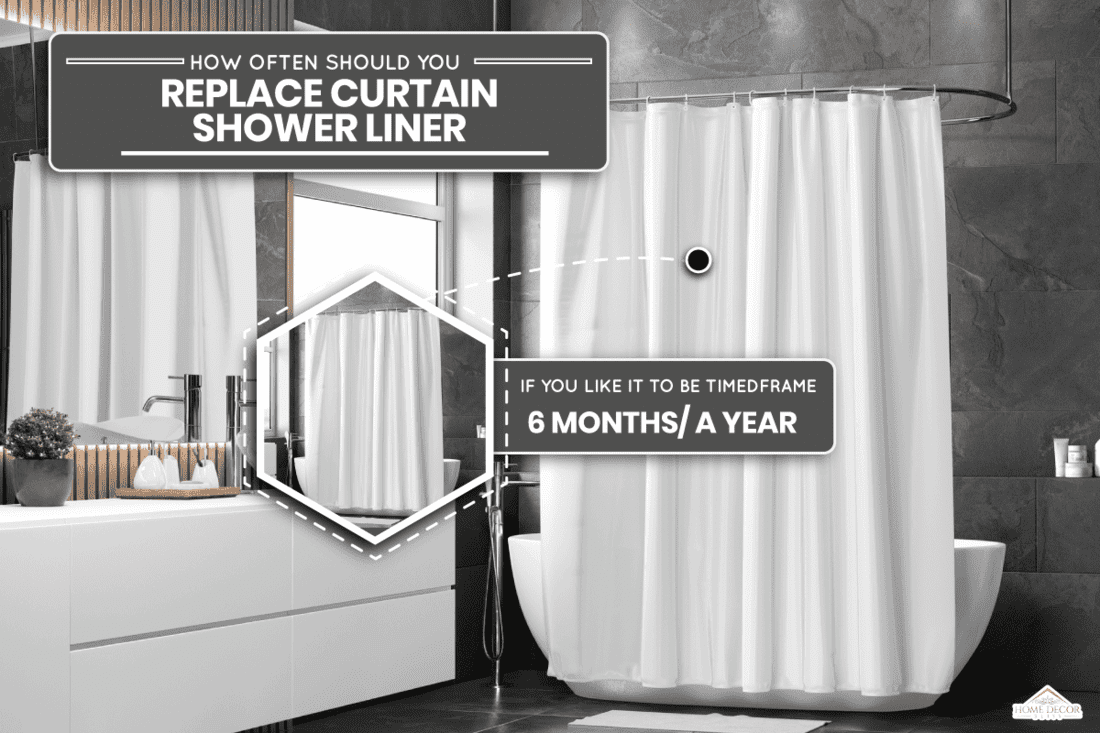 As we mentioned earlier, you can use a washer to clean your fabric liner. Cleaning your plastic liner will require a little more effort. You can clean it by scrubbing it with baking soda and water using a microfiber cloth or make sure to spray it down with white vinegar every once in a while to reduce the chance of mildew and bacteria growth.

If you're wondering if you can do without a shower curtain liner, read more about that subject here: Do Shower Curtains Need Liners?

Should The Shower Curtain Touch The Floor?

It might be a good idea to leave a space between the shower curtain and your floor to prevent it from collecting dirt and bacteria from bunching at the floor. It'll be much easier to clean your bathroom floor as well.  Though, if these are minor inconveniences for you, and you prefer how the curtain looks when it touches the floor, there are no rules against it.

Here's some example of how different heights might look!

Large Space Between The Curtain And Floor 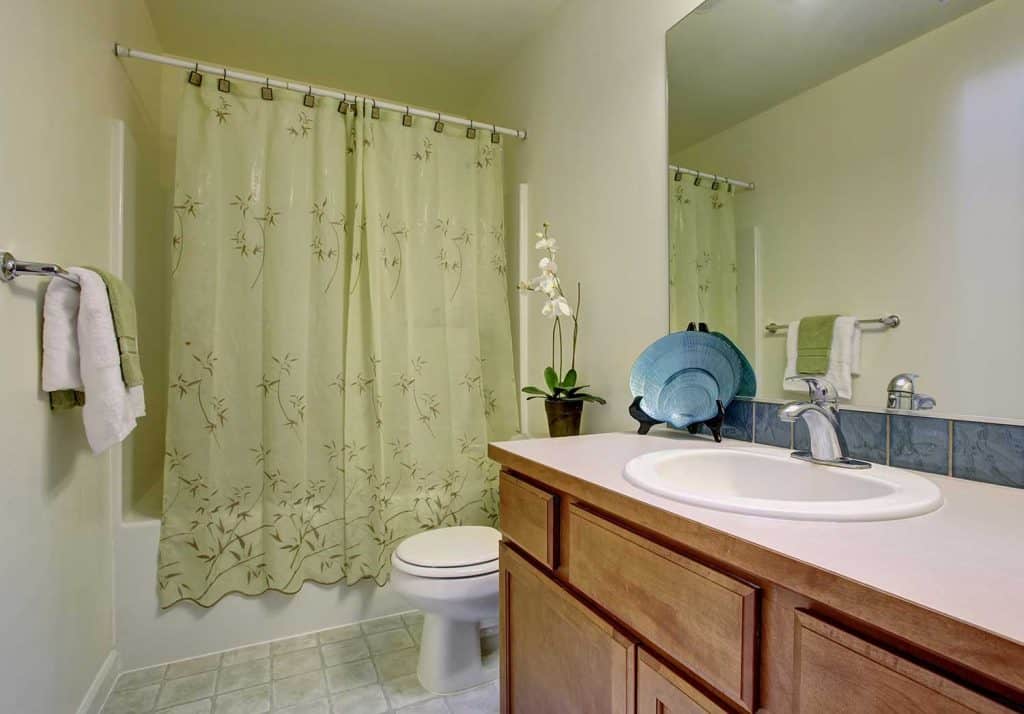 Couple Inches Off The Floor 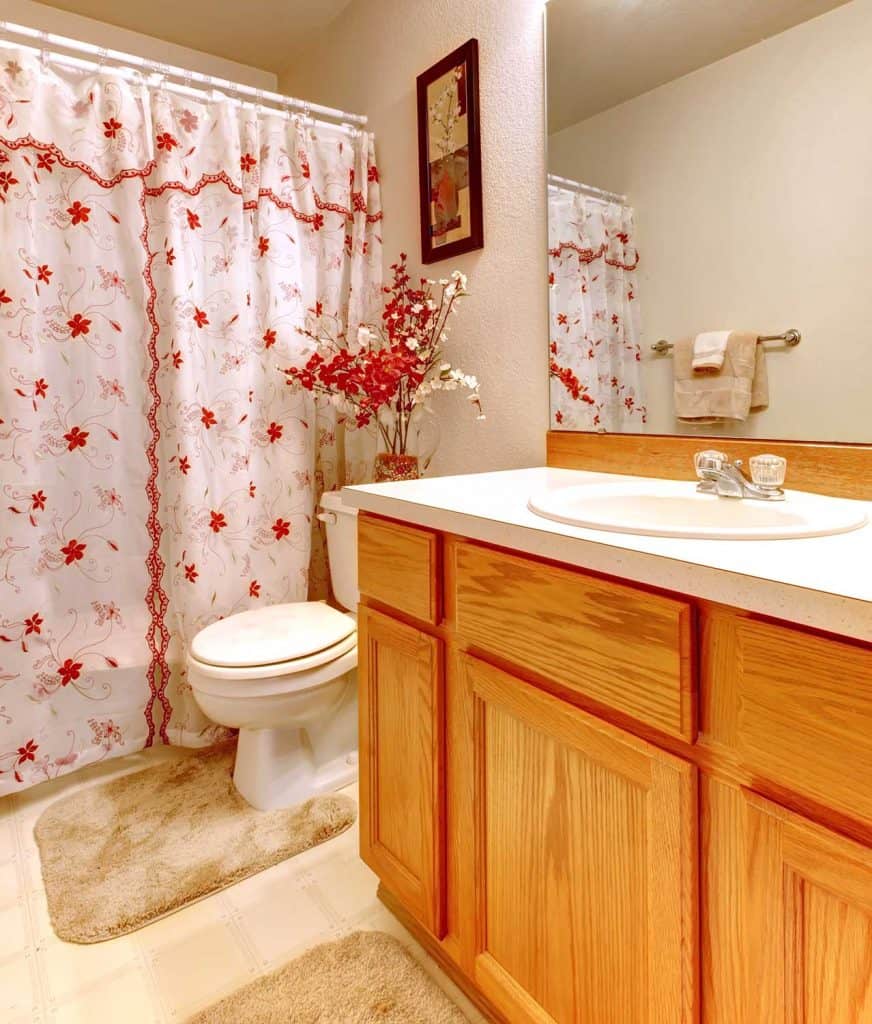 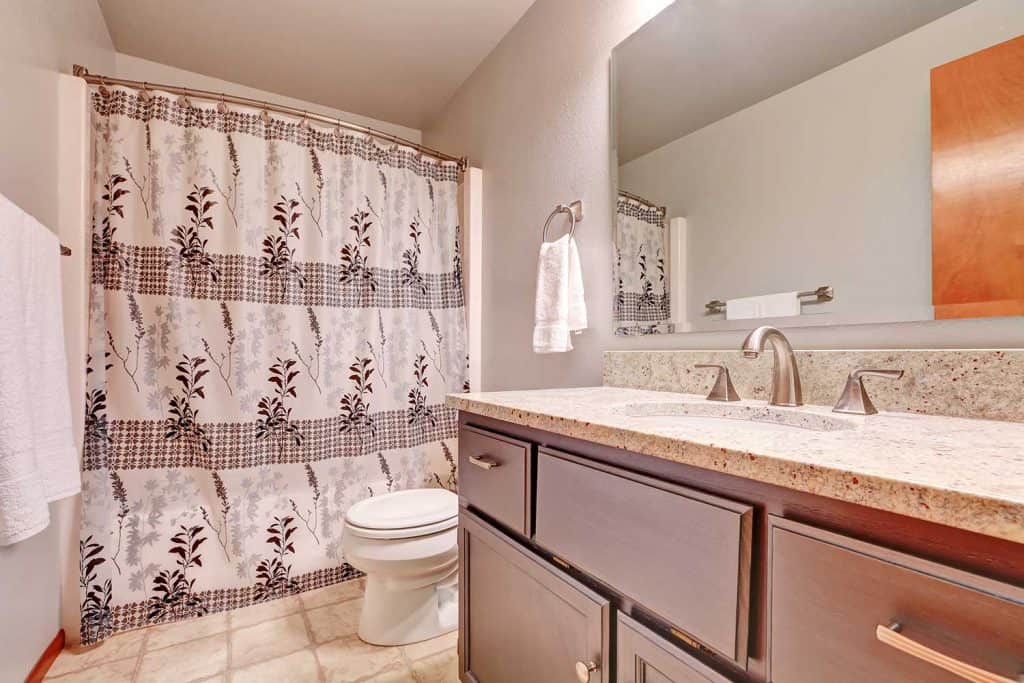 For an entire article about this topic, check out another one of our blog posts: Are Shower Curtains Supposed to Touch the Floor?