Bathrooms are a room that many don't pay attention to detail. You get in, do what you have to do, and get out. However, one problem you might have noticed is that the walls are sweating. If you're wondering why that happens, we've researched the issue for you.

As you might have already guessed, the reason the walls in your bathroom sweat is condensation. Moisture releases into the air every time you take a bath or shower. It eventually mixes with the air and forms into droplets once it touches a cold surface.

Condensation is a problem no matter the room it occurs in. There isn't a foolproof way to stop it completely. But, reducing the condensation is essential if you want to prevent mold growth inside your bathroom. We cover these concerns further ahead. If you'd like to learn more, keep reading. 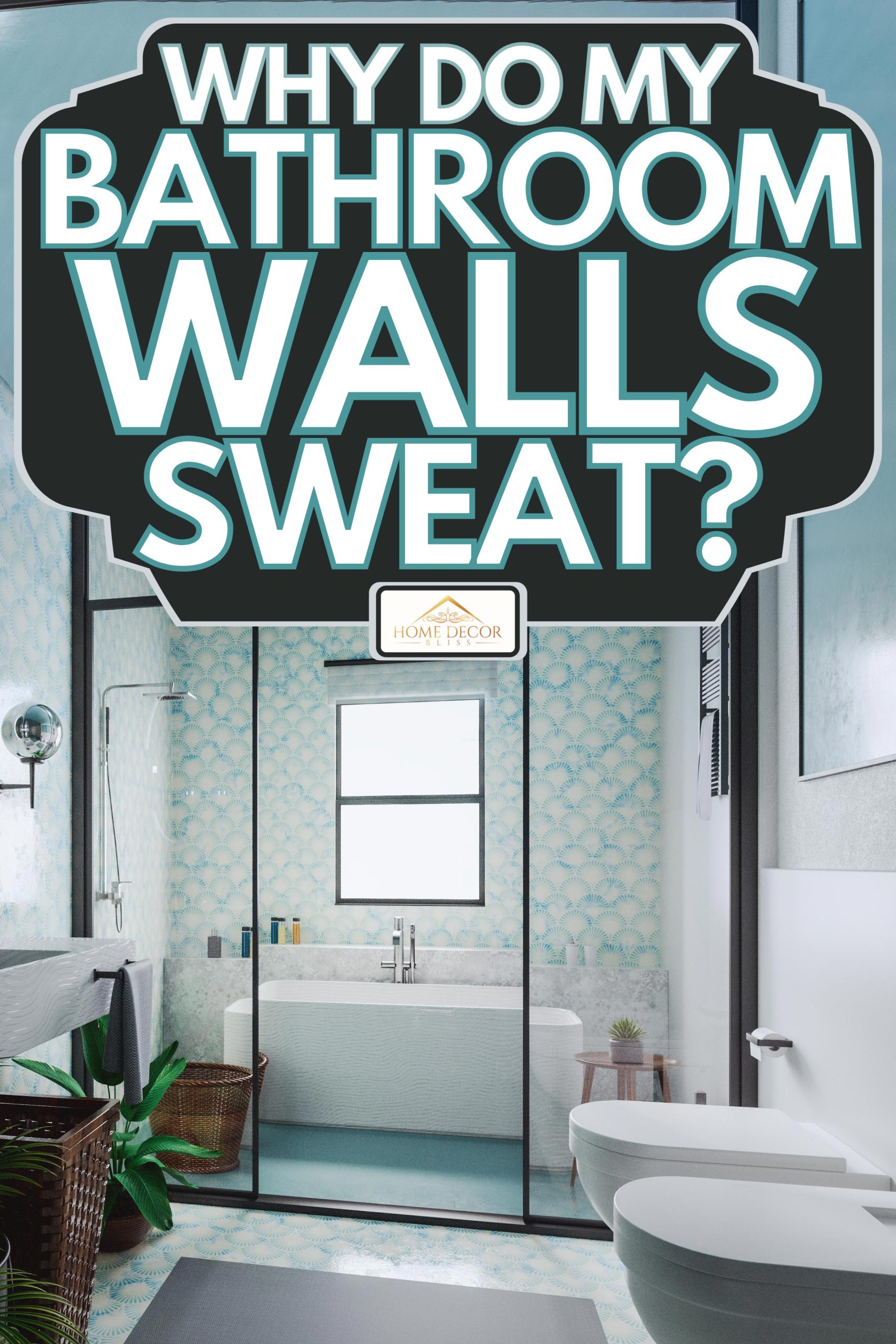 If the walls on your bathroom are sweating, it's typically not a big deal. It's normal to see condensation on the walls or other spots after a shower or bath. The reason is that it's during these times that hot, moist air hits cold, dry air.

When you take a shower, you might notice there's a lot of steam accompanying the water from the showerhead. Some might question this because you'll normally see this much steam when water is boiling. And, we can't shower in boiling water.

So, what's the deal? How does a lot of steam form when you turn on the hot water in a bathroom? That's a good question that can lead us towards reducing condensation!

As drain and blockage cleaning specialists suggest, it's because water doesn't need to boil to evaporate. The only condition that it requires is heating. So, some of the water molecules will change from liquid to gas.

Therefore, the water molecules that don't gain enough energy for evaporation make their way to you. The water that does gain enough separates from the rest and appears as vapor.

The vapor will travel around the room, more so if it doesn't have adequate ventilation. As a result, you're going to see sweating walls. This phenomenon will extend towards the bathroom ceiling and the window too. 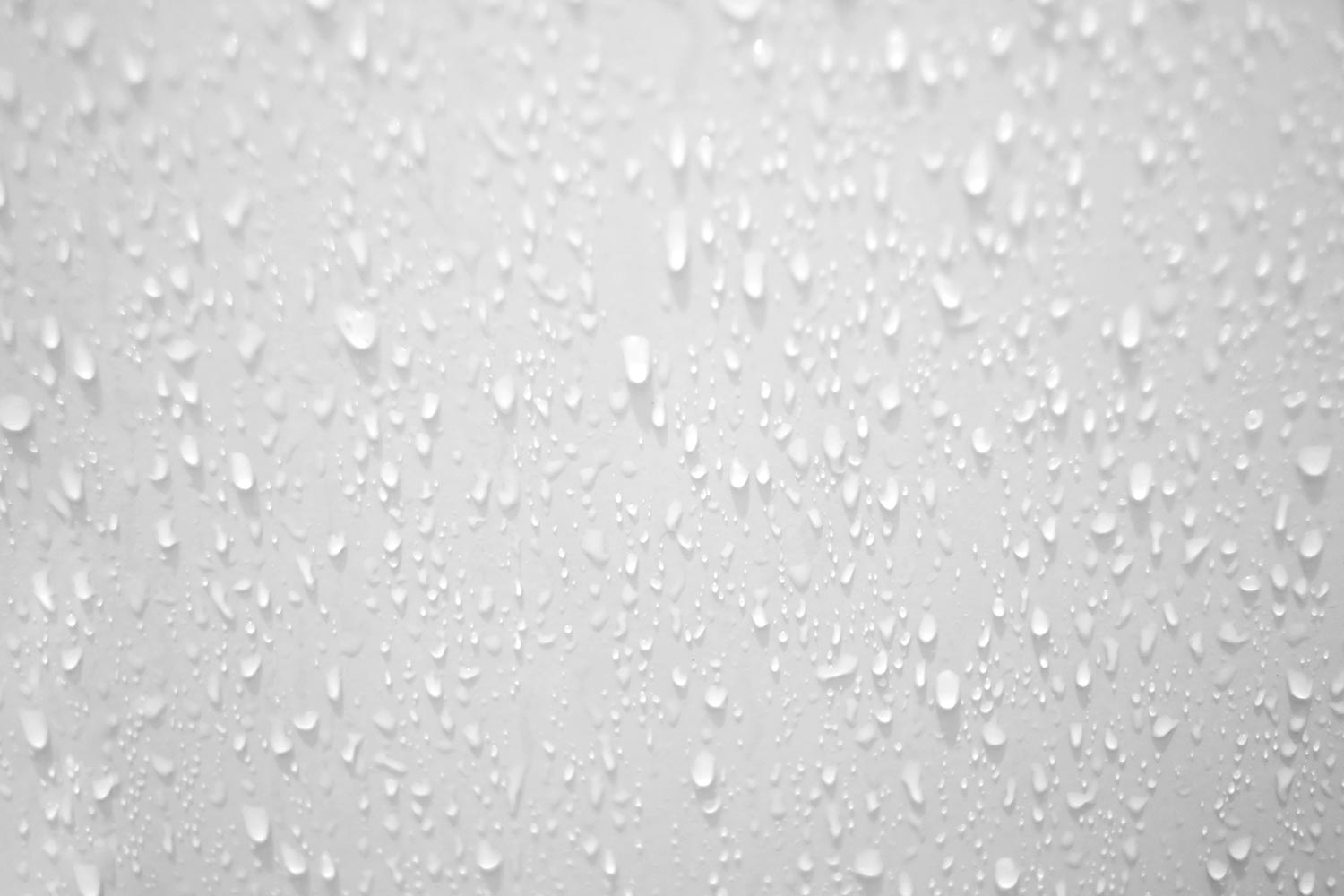 When It Becomes A Problem

As you might have already guessed, the problem of bathroom condensation is mold growth. If there's too much moisture, mold will come. Depending on various factors, there will also be discoloration in random areas of the walls.

Let's go over some of the issues that can occur.

Why Do My Bathroom Walls Sweat Yellow? 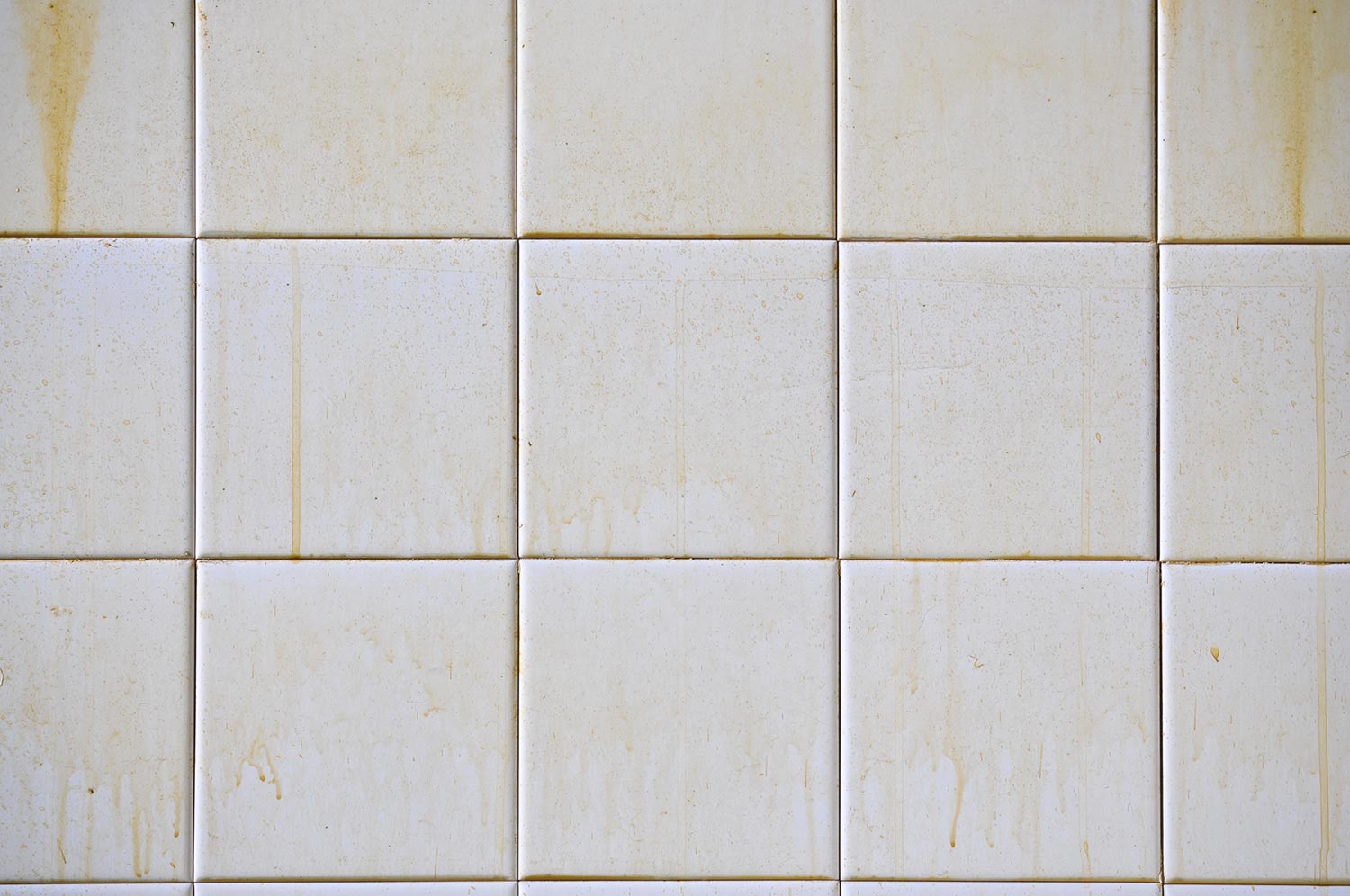 If it's your first time being concerned with the walls sweating, you might have let it dry without doing much to prevent it. The results of letting it dry will vary. In some instances, it will make the bathroom walls turn yellow.

It will also be noticeable in other areas - like the bathtub. Sometimes, only the walls will show a yellow discoloration. Regardless, there are a few reasons why they might sweat a yellow color.

The first reason would be mineral deposits. Though, this would occur if you let the water droplets dry. It happens because the water in the bathroom isn't filtered completely.

Water will contain various minerals like calcium. So, what happens is the water will evaporate and carry the minerals with it. Once it touches a cold surface, it turns into water droplets.

When it drys, the water is no longer there. But, the minerals are left behind. Over time it will build up. And, as it gets worse, it will show a yellow discoloration around the bathroom. 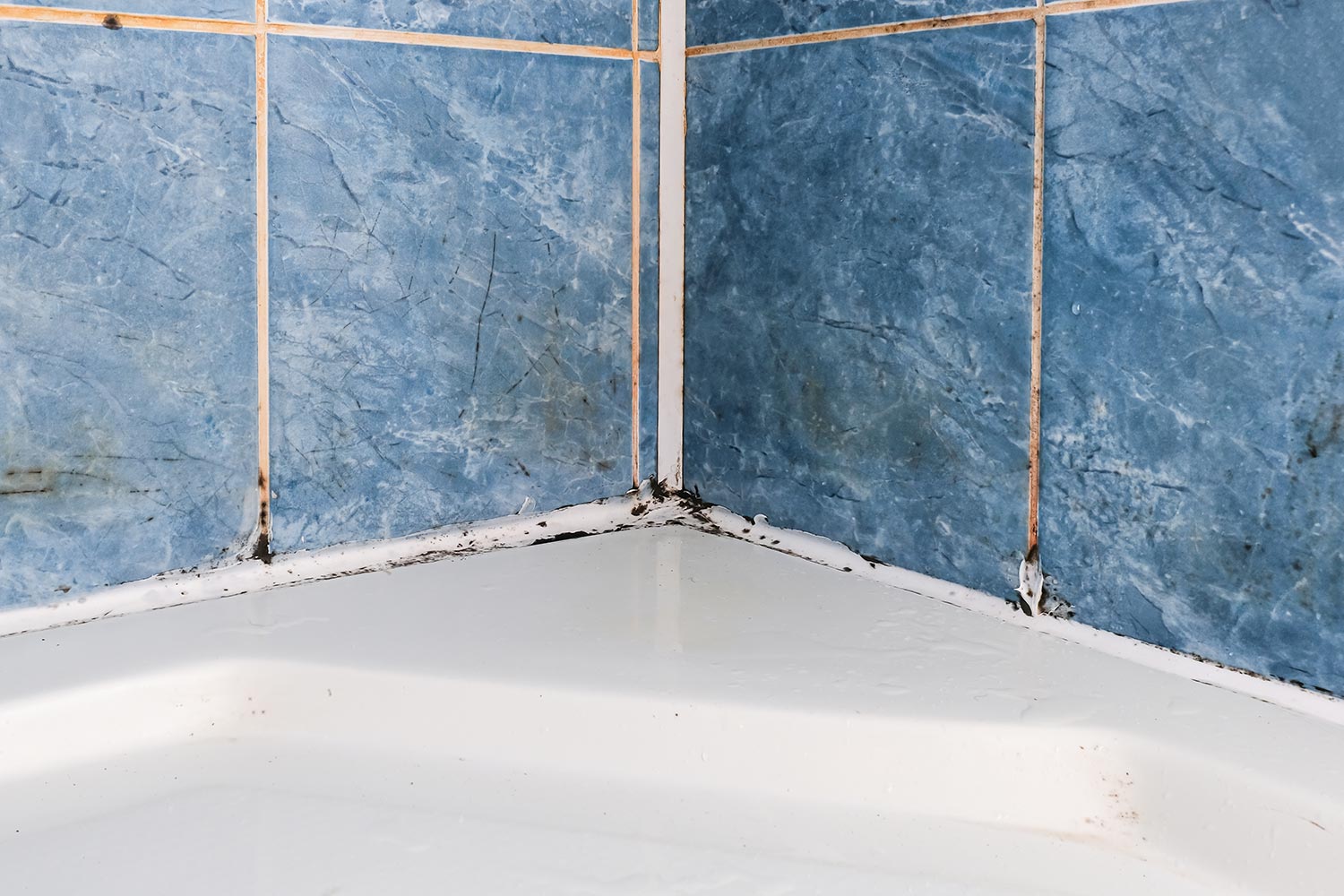 Did we forget to mention these minerals are also nutrient-rich? This tidbit leads us towards the next cause of yellow walls. The reason is fungal growth.

Mineral deposits in your bathroom are food sources for fungus. And, since the room will continue to be moist, it provides an environment where it can thrive. Soon enough, there will be yellow mold colonies.

You will mostly see fungal colonies near areas with heavy moisture exposure. Thus, it's common around corners of the wall and where the bathtub meets the wall. Of course, the natural concern about this would be - can it be harmful to health?

People with healthy immune systems won't experience much. The main concern would be people with respiratory illnesses. So, for reasons other than discoloration, you'd want to get rid of this as soon as possible.

Another reason your wall could be sweating yellow would relate to smoking habits. Does anyone in your home smoke? If they use tobacco or cigarettes, they could be using the bathroom as their smoking spot.

Not only is this bad for the smell, but smoking can also stain the walls!

Why Do My Bathroom Walls Sweat Brown? 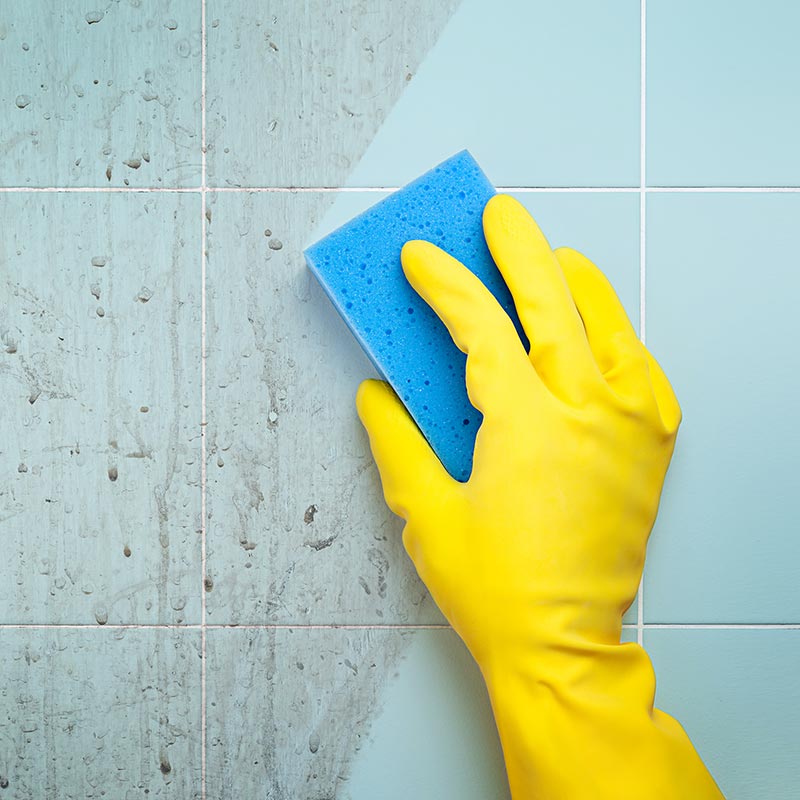 In some cases, the color that accompanies the sweat isn't yellow. Instead, it's a brown color! How would this happen?

If you have found that the problems above don't apply to your situation, did you paint the bathroom recently? Answering yes would lead us to surfactant leaching as the culprit. It only occurs when you've painted the walls using water-based latex paint.

It's not harmful to the wall or the paint itself. So, it's mainly an aesthetic concern. The reason surfactant would leach from the walls is because of moisture.

As mentioned, the bathroom is an area with high moisture exposure. Combine this environment with recently painted walls - using water-based latex paint - and you get surfactant that rises to the surface. It happens while the paint is drying.

Texture-wise, it will resemble an oily, sticky sap-like substance. Removing it is as simple as wiping it away with a damp cloth.

Why Is My Bathroom Ceiling Sweating?

As mentioned, sweating in a bathroom comes from condensation. So, if your bathroom walls are sweating, your ceiling will be too. However, sweating on the ceiling could also indicate there's something wrong in your attic.

Water droplets form when hot, moist air meets cold, dry air. If it's sweating in one area, in particular, it could indicate a cold bridge. In other words, there's a gap in the area where insulation should be present.

Ensure this isn't the case by going into your attic and checking if there is a gap of insulation missing. Otherwise, it's all down to inadequate ventilation.

How Do I Stop My Bathroom Walls From Sweating?

If this is a daily occurrence for you, it might be a good idea to start thinking of ways to reduce condensation. There are a variety of ways you can combat it. This way, you can keep the visual appeal of the walls and, most importantly, prevent mold growth.

Wiping the Bathroom Down

The first way you can reduce the problems from condensation is by wiping the walls down after a shower or bath. It's one of the more tedious ways. But, it reduces the chance that you'll see yellow or brown discoloration around your bathroom.

Of course, this isn't a permanent way to combat condensation. If you're rushing to work or somewhere in general, it would be time-consuming to wipe down the entire bathroom. Thus, we'll have to continue looking for other methods.

If you own a house, consider getting an exhaust fan. While they get many complaints about being loud, these fans do their best to combat condensation. That is if you install it properly.

In one instance, one homeowner found that their exhaust fan vented directly to their attic insulation. This case would be an example of the improper way to use one. If you want good results, it needs to vent directly to the outside.

Here's a YouTube video demonstrating the efficient way for an exhaust fan to vent:

To avoid as many problems as possible, get a professional to install it.

Open The Windows And Door

Unfortunately, there isn't much to combat condensation entirely. The best way would be to use an exhaust fan. But, if you live in an apartment or have a budget, that might not be achievable.

So, the best you can do is leave the door open. If you're taking a shower, leave the door slightly open. Once you finish, open it completely to let it air out.

You can do the same with the window. Leave it slightly open when you're taking a bath or shower. Once you finish, open it a little more.

Other users would recommend using a fan and aiming towards a window. It could be your DIY exhaust fan of sorts.

At the worst, you could consider getting a dehumidifier to reduce the moisture level in the bathroom. But, this is an expensive option. As users suggest, it isn't the best at combating condensation in your bathroom.

It would be better to spend more and pay for an exhaust fan installation. If that's not possible for you, consider giving a dehumidifier a try. Some have had success with using one as a temporary solution.

Condensation in a bathroom isn't a surprise. However, problems occur if you don't do anything to combat the sweating. Thus, it's essential to do your part! We hope you found the information above helpful!

Before you go, are there other areas that concern you? How about the bedroom? Does it smell? To find out why check out our post:

Why Does My Bedroom Smell In The Morning?

Are there yellow stains on your pillows? Find out how to remove them by checking out our post:

How To Get Yellow Stains Out Of Pillows