If you have ever woken up in the middle of the night due to loud popping noises outside of your home, then know that you are not alone. This sort of thing happens frequently during cold weather. And if you're wondering why is that, we already asked the experts to answer that question for you.

According to the professionals, the reason why your deck is making those loud popping noises is that they constantly expand and contract in the cold. In doing so, it creates stress within the deck and when released, it creates that loud noise you hear. Usually, this is not a cause for worry but it's still a good idea to check your deck for any damage.

In this article, we will go into even more detail while explaining the topic for today. Not only that, but we will also discuss the various reasons as to how the deck makes that loud popping noise, all while answering some other questions you might have in mind. So, be sure to continue reading if you wish to find out more. 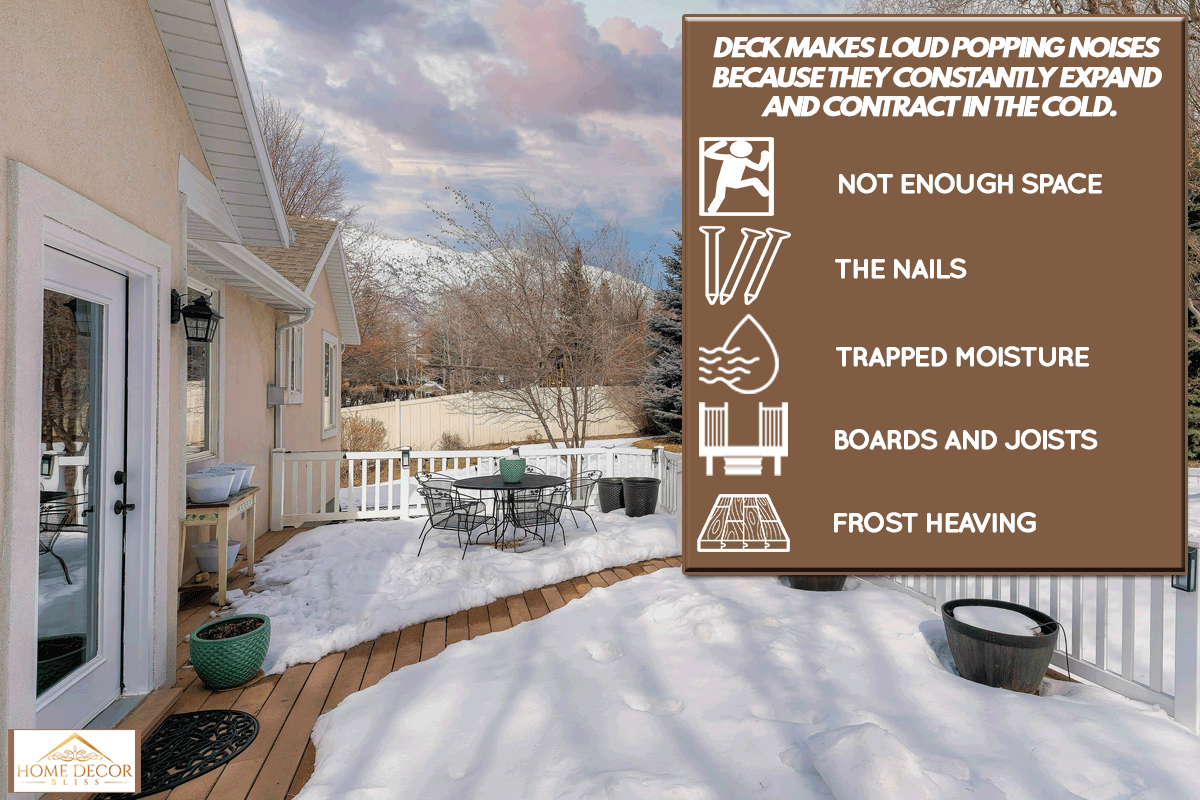 Why Does The Deck Make Loud Popping Noises?

As mentioned earlier, the constant expansion and contraction of the deck materials create that loud popping noise. This is especially true when the temperature outside starts dropping drastically. 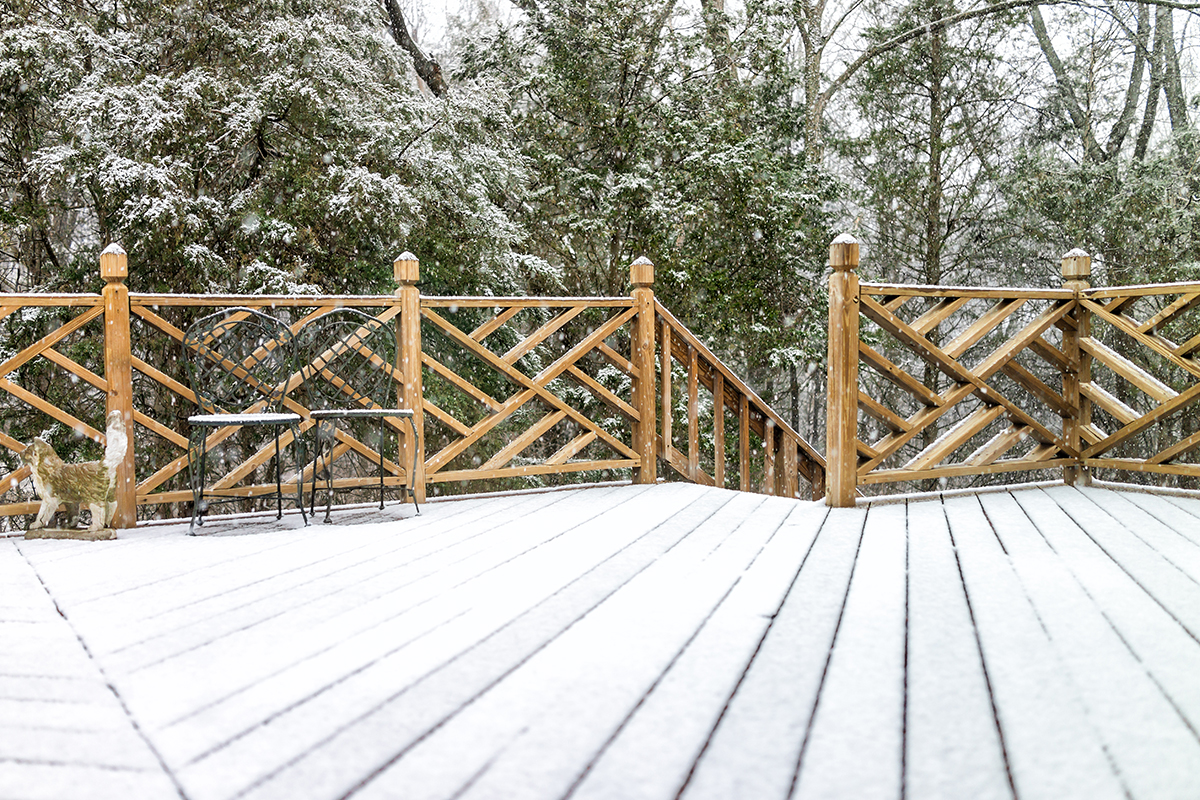 Of course, how loud the sound that it makes is entirely dependent on a few things. For example, composite decks or those made with vinyl tend to create louder noises than decks made out of wood. The overall structure of the deck also contributes to how loud a noise it makes as well.

Reasons For A Deck To Make Noises

In this section, we'll be discussing the various reasons that help create that loud popping noise that you hear. Having an outside temperature that's cold enough to initially start the sound is just the start. And from here on out, you'll find out the other variables that make that noise as well.

This is something that a lot of beginner homeowners tend to overlook when it comes to repairing or building a deck. While one might think that fastening the boards as tightly to one another is the way to go, that's entirely wrong.

It's important to understand that leaving some space in between these boards would help give them some breathing room. So that when they start to contract and expand in the cold, they won't grind against one another.

If ignored, the stress built up inside these materials would have no easy path of release. As a result, the noise it would produce would be quite loud. Sometimes, you might spot a few cracks here and there from where the sound came. 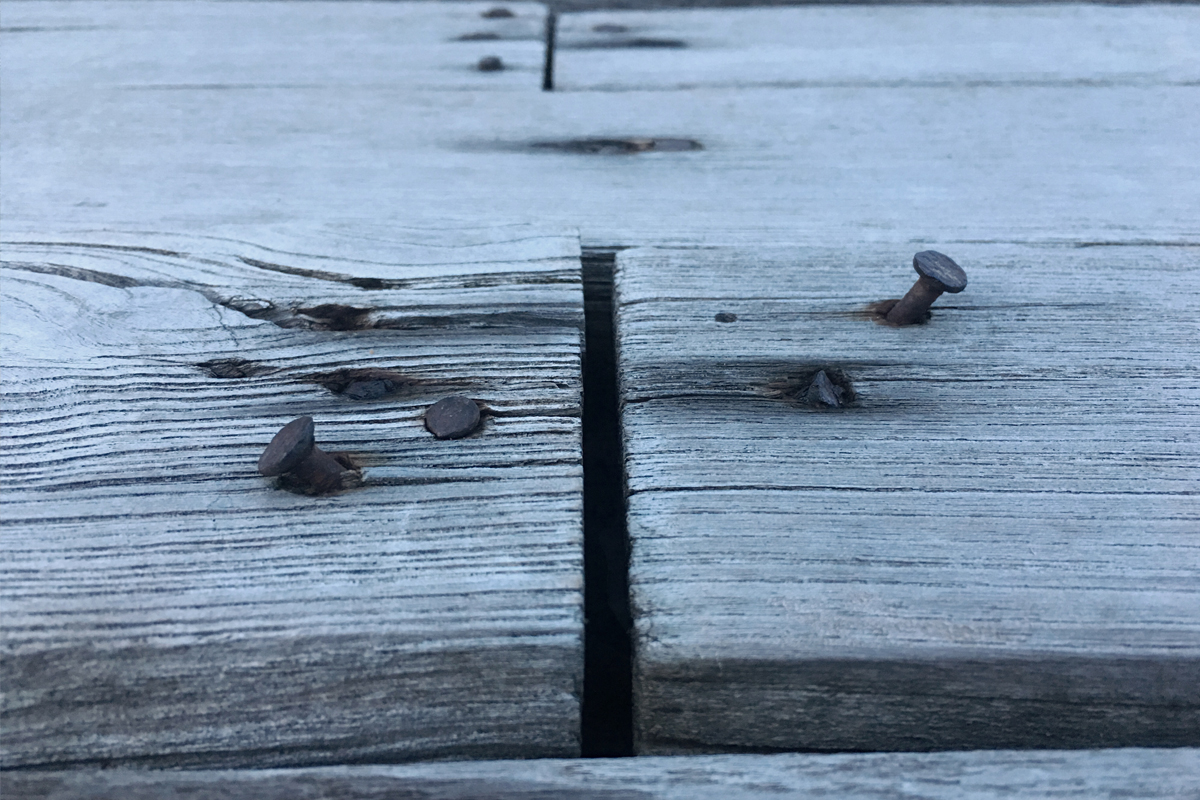 During cold weather, even the nails that hold your deck together are not exempt. Not only that, it contracts and expands far differently from the majority of your deck.

What ends up happening to them is that they would slip out of the boards. This sudden action is enough to cause that popping noise although, it usually comes out as a creaking noise for the majority.

The same applies to screws as well. So be wary when stepping outside onto your deck. Or else, you might end up stepping on one and hurting yourself.

Check these wood screws on Amazon.

During the winter, especially when it starts snowing, the moisture that forms between the deck boards can expand and produce that same loud popping noise. This often happens at night when the snow has melted and seeps into the spaces between the boards. Then as nightfall comes, the sudden drop in temperature would freeze the trapped moisture, thereby expanding it.

This could result in some damage to your deck, especially to the boards. The expansion would loosen the boards from where they were and would continue to do so until it pops out of place. 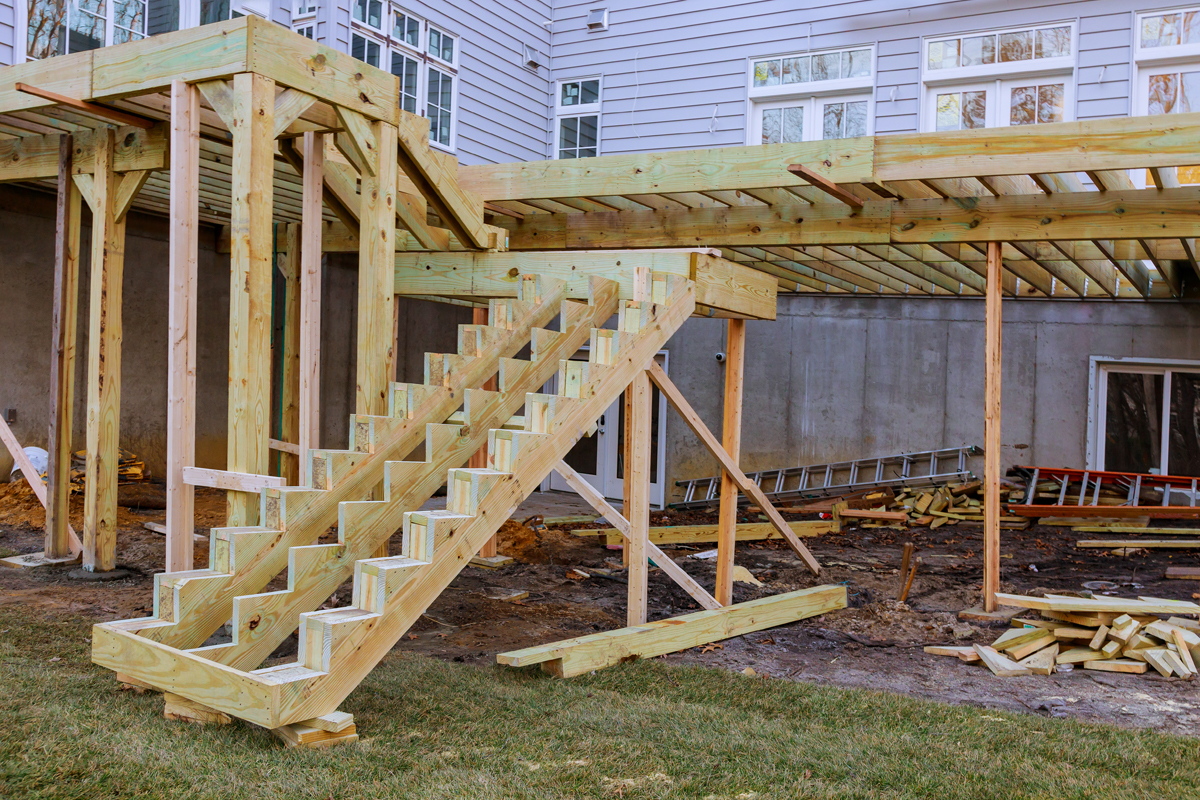 We touched upon these earlier but the boards and joists of the deck would constantly shrink and expand in the cold as well, causing that same popping noise. Additionally, the rate at which they contract and expand varies, depending on their material.

The first one to react in this situation is usually the joist. This is the frame that's on the underside of the deck and is responsible for supporting it. So when they start to contract and expand, they would naturally push upwards and into the boards.

As a result, this creates various popping noises. They can cause the ice formed in between the boards to crack and break apart, as well as push boards against one another. The resulting force is enough to even free up some boards and nails as well in the process.

Check these deck boards on Amazon.

This is the result of the ground swelling upwards due to cold temperatures. Due to how uneven the process is, the boards will shift unnaturally to compensate for the uneven stress. 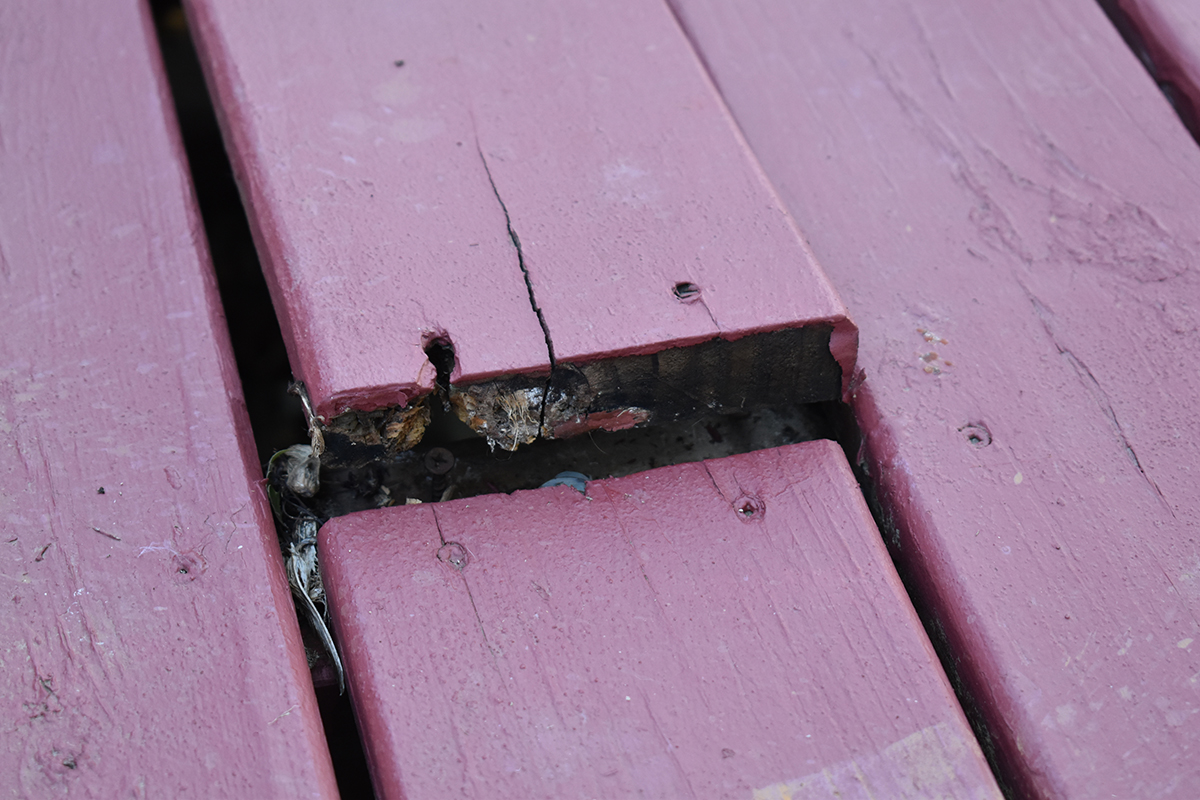 The result would be an uneven deck. But there's no need to worry if a professional installed your deck. That's because they had already taken into account frost heaving and applied the necessary adjustments.

But in cases where the deck is not even, it's best to bring in a professional. Do the same as well with detached stairs or if they are not as straight as they once were.

Check this level on Amazon.

Does This Mean That There's Damage To The Deck?

While hearing all those loud popping noises at night is nerve-wracking, there's nothing for you to worry about. Professionally installed decks can easily endure extreme temperatures based on their design.

Now and then, a loose nail is the only thing that would need your attention. But besides that, there's nothing for you to worry about. However, if you're still concerned, check your deck to make sure that there aren't any lasting damages.

Is There Any Way To Protect The Deck From The Cold?

If you're considering adding a layer of protection to your deck, consider staining it. This helps strengthen the boards and makes them more durable against the cold. Not only that, it helps prevents rot from forming in your wooden panels.

Additionally, staining your deck is also useful during the summer heat as well. It prevents ultraviolet damage from the sun's rays and prolongs the duration of your deck's shelf life as well. Also, it deters mold and mildew from growing on it as well.

One more thing that staining provides is an aesthetic look. It helps bring out the color and the appearance of the wood grain, making your deck's colors pop even more. Just make sure to apply a water-repellant finish to your deck every few years to keep it well-protected.

Check this wood stain on Amazon.

Can One Stain A Deck During Winter?

You definitely can however, it is not ideal. To stain your deck, the temperatures outside should be above 50 degrees Fahrenheit. This is to ensure that the coating would dry properly.

So if you're planning on staining your deck during the winter, you would achieve results that are subpar at best. That's because if the temperatures get low enough, it would freeze the coating applied to your deck. And that would result in the coating not sticking properly.

The best time for you to stain your deck is during the summer when the temperatures outside are high enough to speed up the drying time. Remember that the process of staining your deck can take up to a couple of weeks, depending on how large your deck is.

What Happens To Wood As It Freezes? 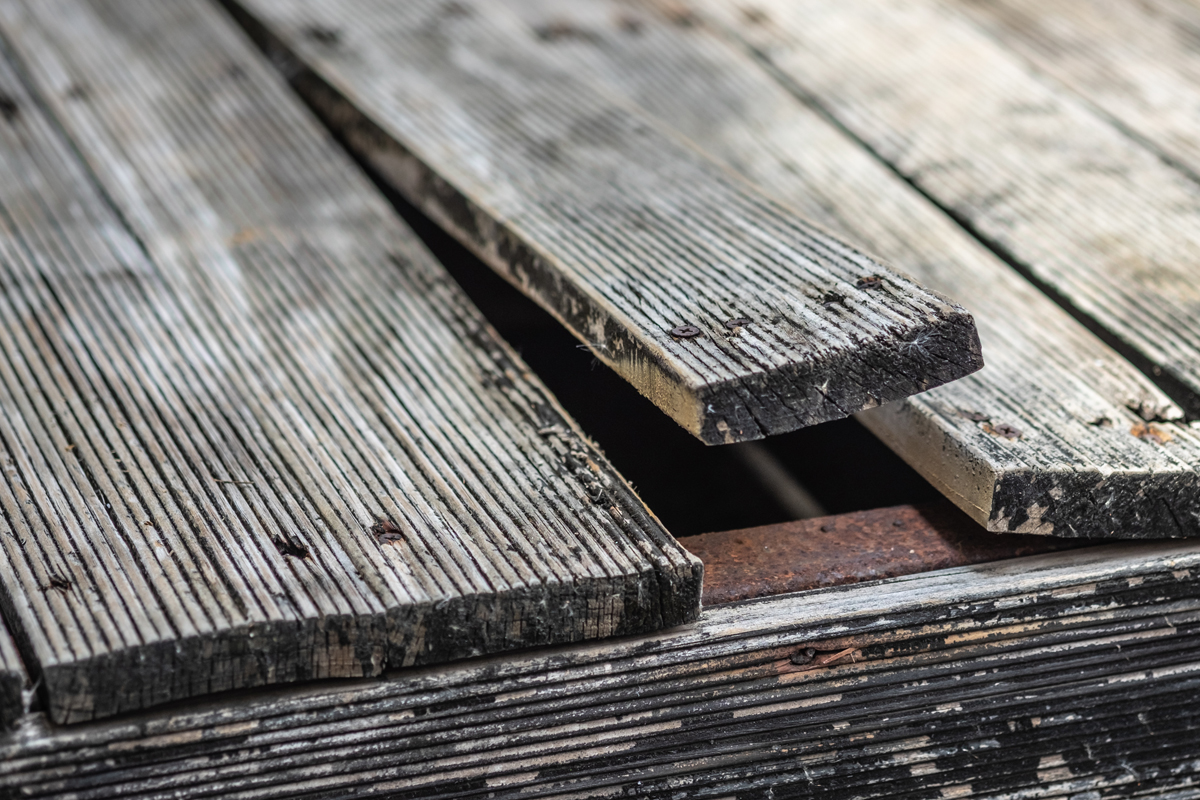 First, hot and cold temperatures outside can't affect wood. It's the change of humidity that affects how wood behaves.

As you already know, humidity refers to the amount of water vapor in the air. And this gets seeps into the wood, leading to moisture forming inside. The moisture would then contract and expand during cold weather, causing the wood to change as well.

And when the temperature drops to below freezing, the accumulated moisture inside the wood would freeze, causing it to break and crack. This would leave the wood in ruins, leading to rot.

So if you have a wooden deck, it's best to stain it immediately. The protective layer would help reduce such damages when exposed to high humidity.

The constant expansion and contraction build stress within your deck's materials during cold weather. And once released, that stress comes out in the form of loud popping noises. So while it might surprising at first, it's nothing to worry about for the most part.

If you found this article to be helpful in any way, consider checking the links below. They discuss other topics that are related to the deck of one's house. So, don't hold yourself back in trying to find the answers you need.

What Color Deck Goes With A Brown House? [11 Good Options]