In many homes around the world, seeing wood ceiling beams is just a part of life. Ceiling beams help keep a house erect and also are the main part of most houses’ support grids. If you go to places like Britain, Germany, or Austria, the chances are that you also might notice how people get very creative in the ways they incorporate their ceiling beams into their home’s decor.

A little inspiration can go a long way, especially when you’re working with wood ceilings. The way you can dress up beams might surprise you. Take a look at these cool ways people made it work for them. 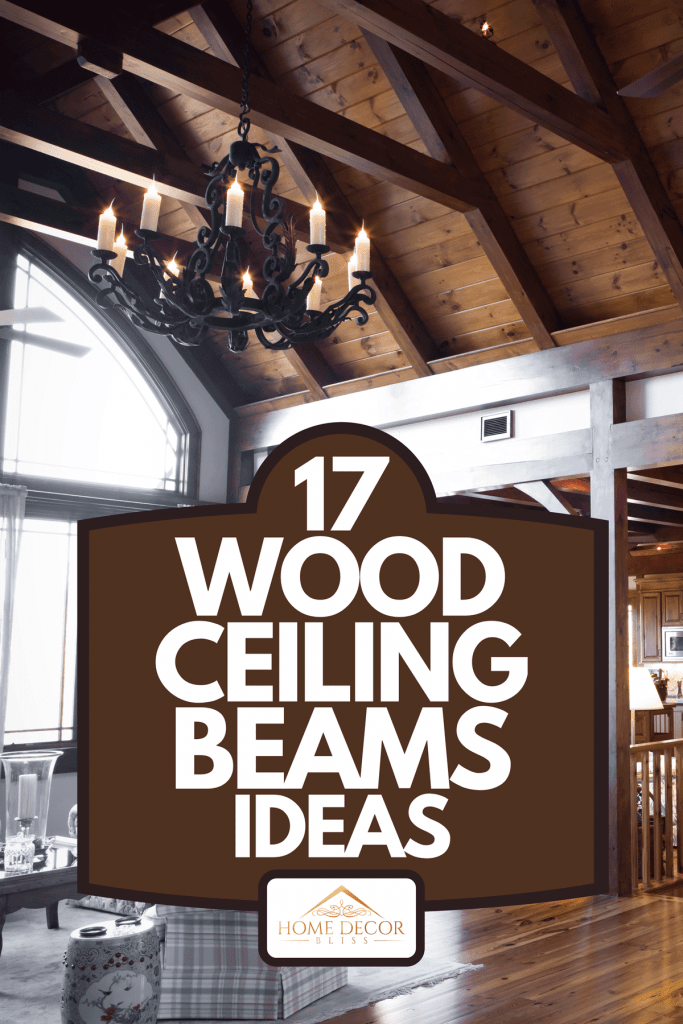 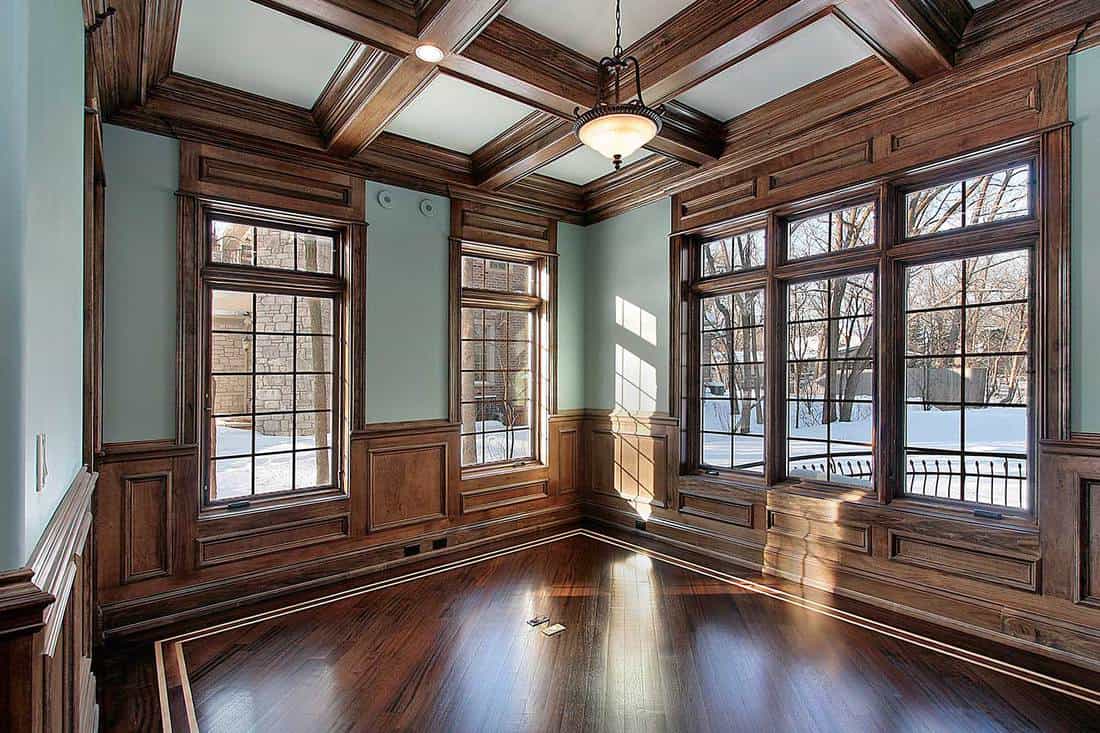 In the Victorian era, libraries were often marked by elegant wooden structures, especially in the ceilings. It used to be that ceiling beams would have molding placed on them and even work as a grid to the ceiling’s top. Here, we see that concept in action. Though it’s old-fashioned, it’s remarkably gorgeous and works in that bookish, country club way. If you have a historic home, this is a great pick. 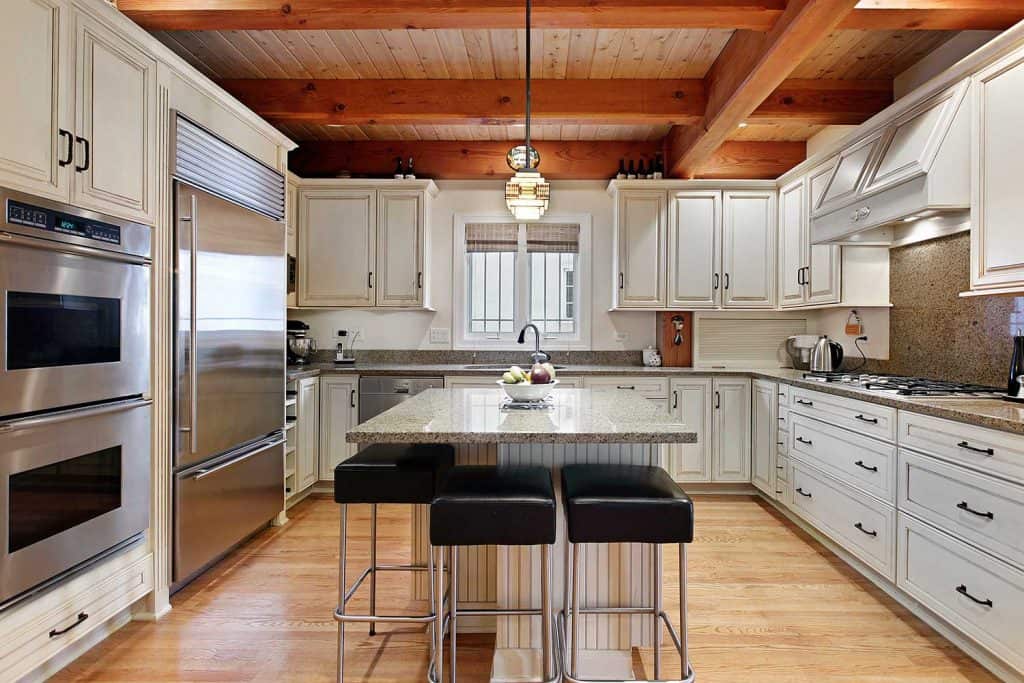 Below this ceiling is a fairly modern, open kitchen with gorgeous white fixtures. It’s what anyone would expect. The designer had another idea coming when they looked at the ceiling. To add a little boldness and color to the kitchen layout, they stained the ceiling beams and a rich, almost orangey color. They made lighter additions throughout the ceiling area using birch or white oak stain to add contrast. This works well with stainless steel appliances and displayed utensils.

Get steel kitchen utensils from Amazon. 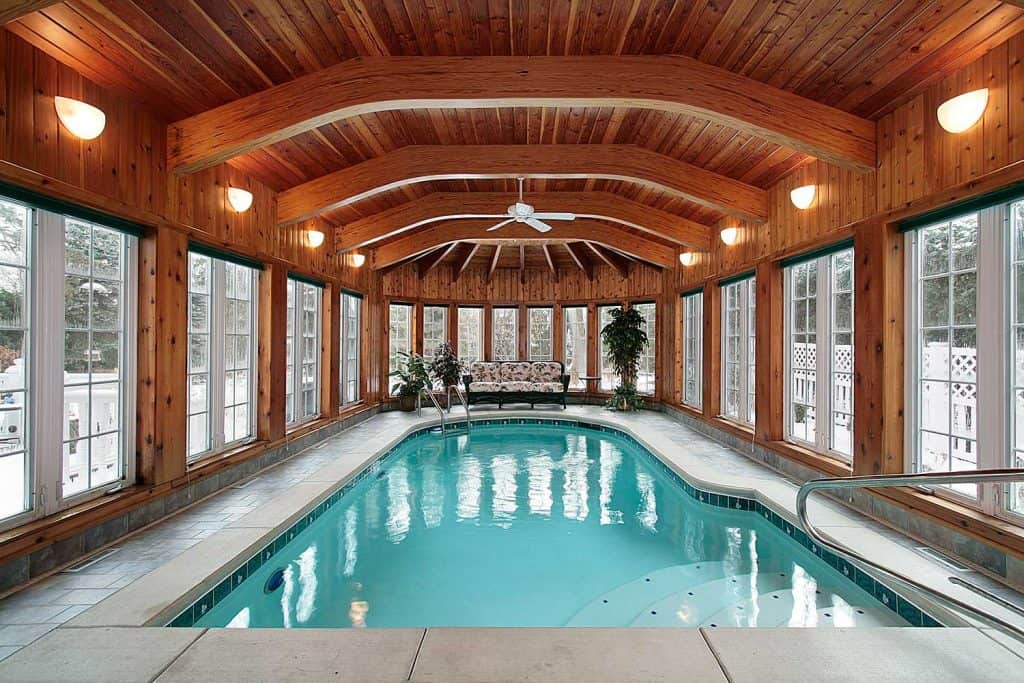 If you have a spa or an indoor pool, then this is one look you will definitely want to snag. Designers made the wooden ceiling beams match the rest of the walls via a truly breathtaking red cedar stain. This made the entire spa area feel like a Scandinavian sauna or a hotel in an exotic destination. The arch shape of the spa also was highlighted through the use of wooden beams. This made the entire spa area feel like it’s larger than it really is.

4.Gonna Swing From The Chandelier 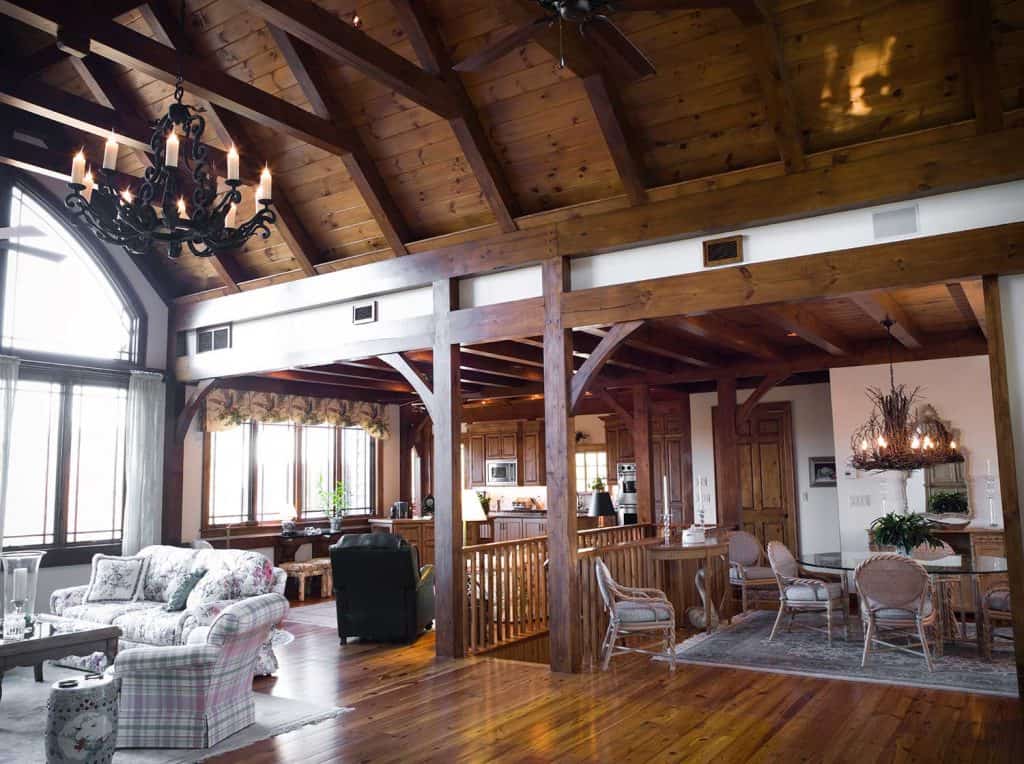 Though the wooden beams can act as a style statement on their own, the truth is that they also are just starting to get used as decor hanging tools. Here, the designer decided to go bold by hanging the lighting fixture from this massive living room’s support beam. The result was pretty awesome. By matching the chandelier to the chandelier, you get a look of continuity. It’s oh, so rustic, too! It would look good with some faux mounted animals.

Click here for a faux deer head from Amazon. 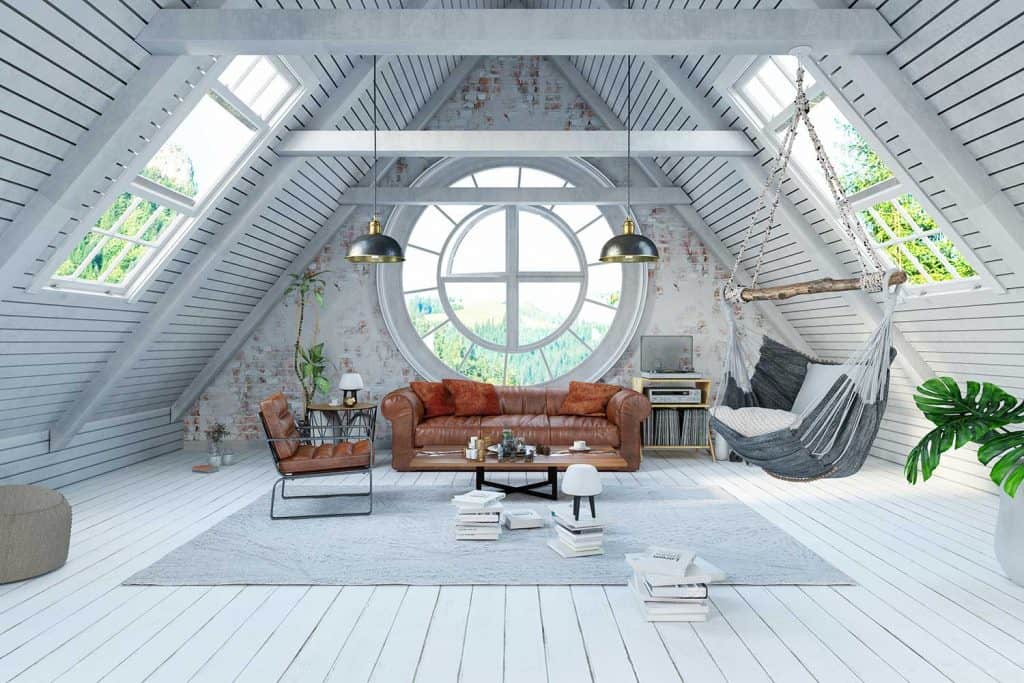 The idea of hanging stuff off the support beams seems like it would be a one-shot thing for people who want to add some lighting. However, it’s not. This designer added an indoor, hanging swing chair to their living room. Without the use of the support beam, this room wouldn’t have that extra punch of whimsy. The function also plays a role here as extra seating in the living room. 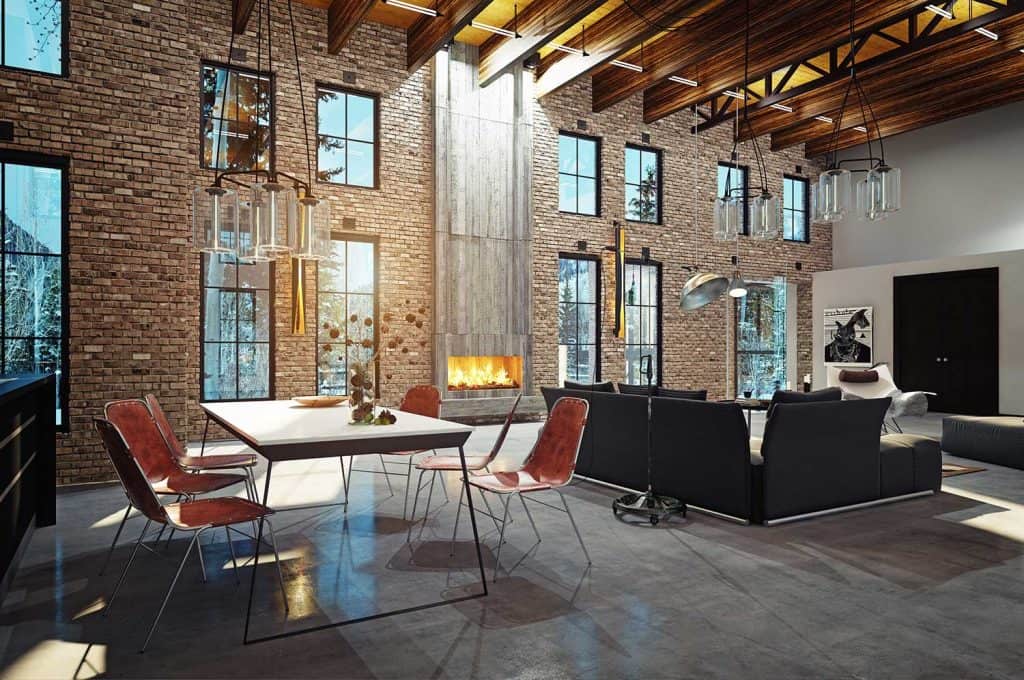 This room took a more industrial look to wooden support beams by accenting them with iron. The brick wall and concrete accents make a huge impact on how pretty this room looks, but that’s not all we got to enjoy. The designer actually went so far as to highlight the beams by adding lighting to the room’s center that points up to the beams! We can’t even begin to say how awesome this looks. It’s gritty yet super elegant at the same time. 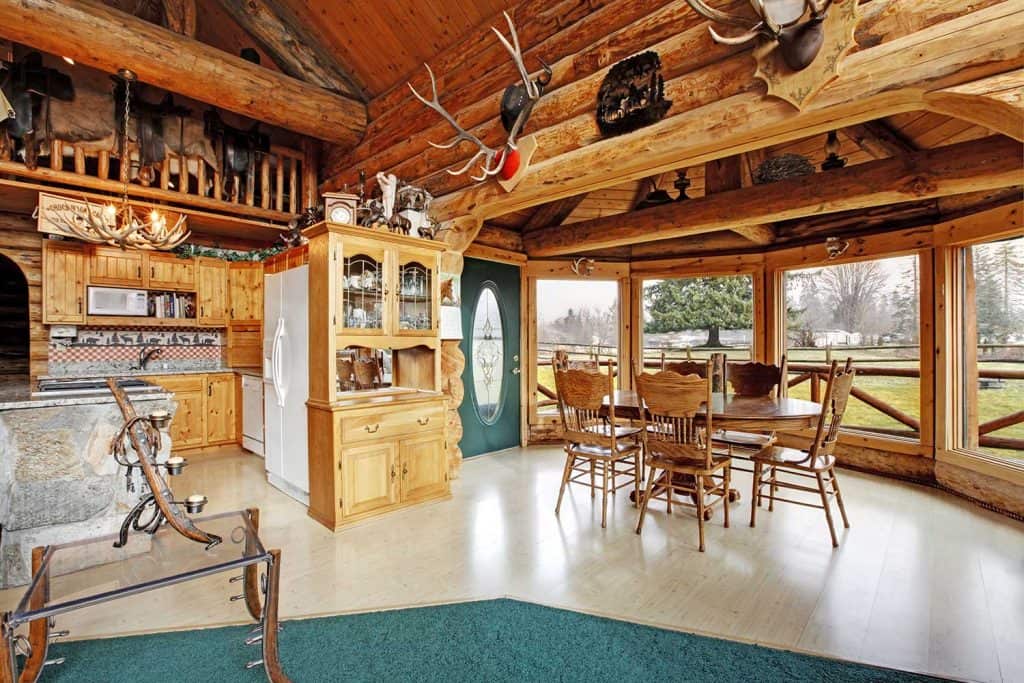 Log cabins and support beams go hand in hand, just like peanut butter and jelly. While many cabins try to downplay the support beams, this architect decided to play things up. Big time! This cabin maker didn’t just make the architecture involve a lot of support beams but used it as a shelf for a variety of woodsy decorations. This might be a little more extreme than most, but we definitely can all appreciate this cabin’s lumberjack style.

Click here for a set of three rustic vases from Amazon. 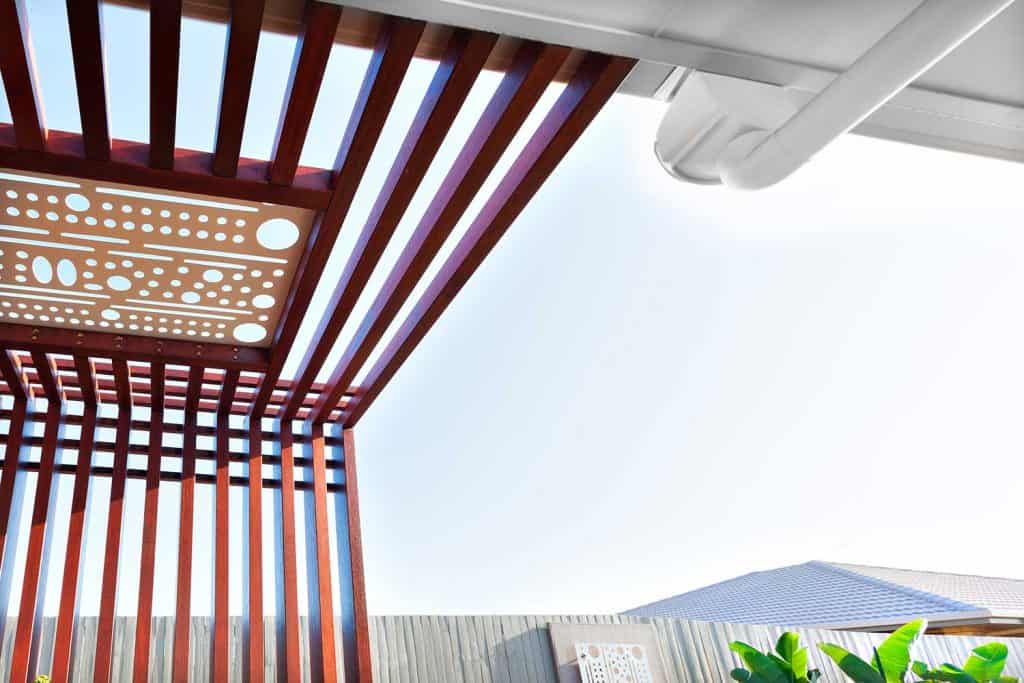 Outdoor wooden ceiling beams? It is more likely than you think, and that’s a great thing for people who want to create a perfect patio outside. Here, the beams themselves add a modern flair to a patio while giving the homeowner a chance to drape a shade over it. In the middle of the support beams, though, is an unusual metal piece of artwork that adds a clublike, artsy vibe to the entire patio. It’s enviable and gives people a reason to say “WOW!”

If you love this look, try browsing our outdoor patio curtain ideas section for this!

9. In The White House 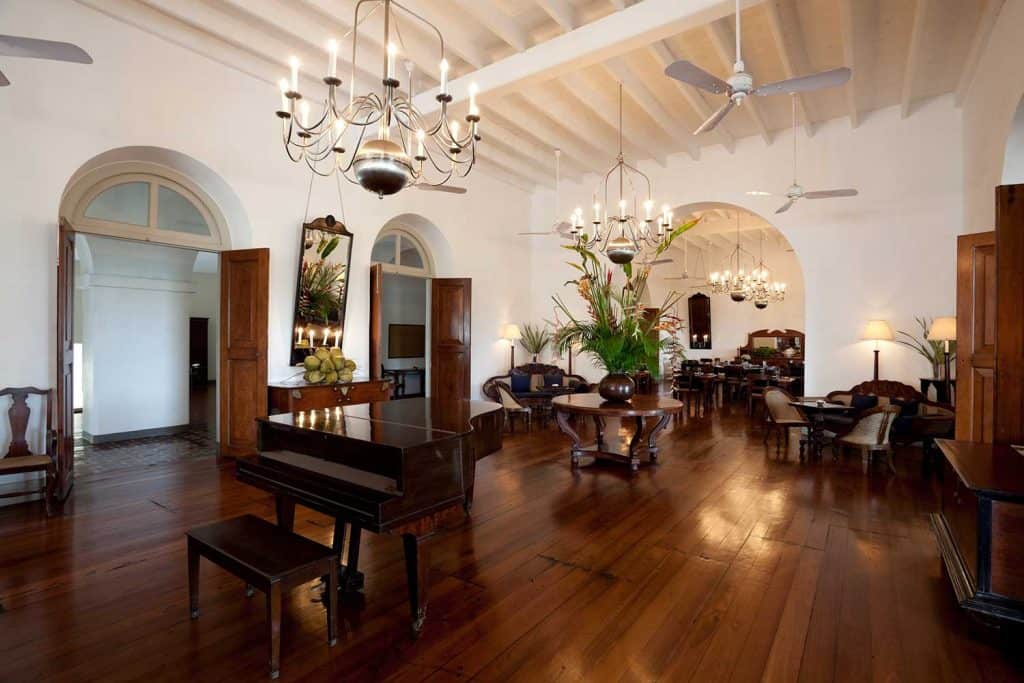 Well, this isn’t the White House, but it is a hotel lobby that was done up in all white, with wooden accents. Most places that have wooden support beams like to stain them, but this hotel didn’t. Rather, they chose to paint it white so that it blends in with the walls and ceiling. This gives the room a more modern and open feel. Sometimes, traditional isn’t the right move. The unified look makes this room look a lot more updated and elegant than if it stuck to a more traditional route of keeping the beams bare. 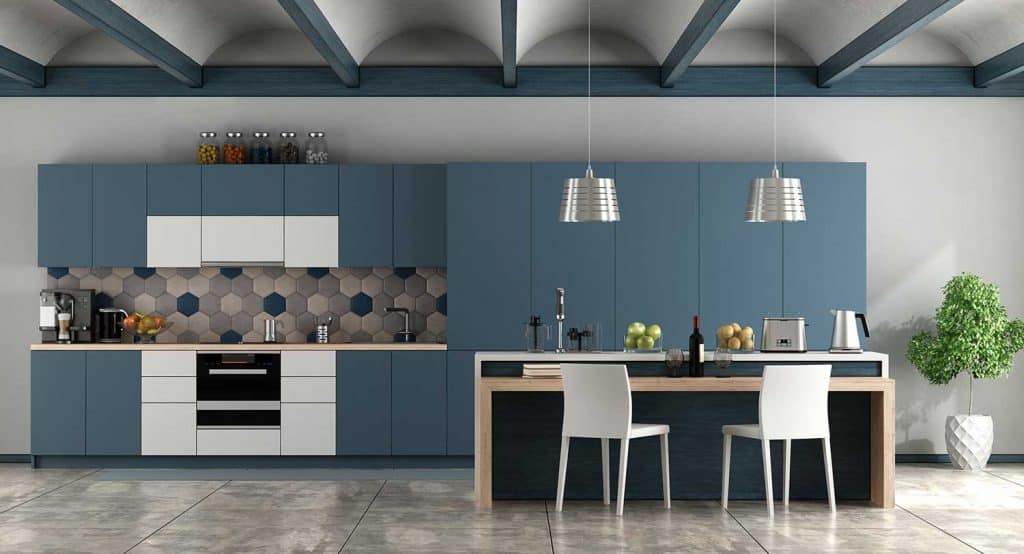 So far, we’ve seen wooden support beams in two main colors: white and whatever wood stain shades. Those two colors are great, but let’s face it, it gets old really fast. This interior designer decided to do something a little different. Rather than stick to the tried and true, they painted the beams the same shade of blue as the rest of the kitchen. This gave the kitchen a pop of color that was much needed and kept it all within the kitchen’s theme. Better still, trying to find appliances that match the look will be a cinch.

Click here for a baby blue toaster from Amazon.

Do you love the old school look of wooden support beams but don’t have them as a part of your home’s architecture? This interior designer decided not to take no for an answer. To give their home the rustic feel they wanted to have, they created a unique setup that features fake support beams installed on the ceiling. Where there’s a will, there’s a way! This designer knew how to work it.

12. Get Medieval With It 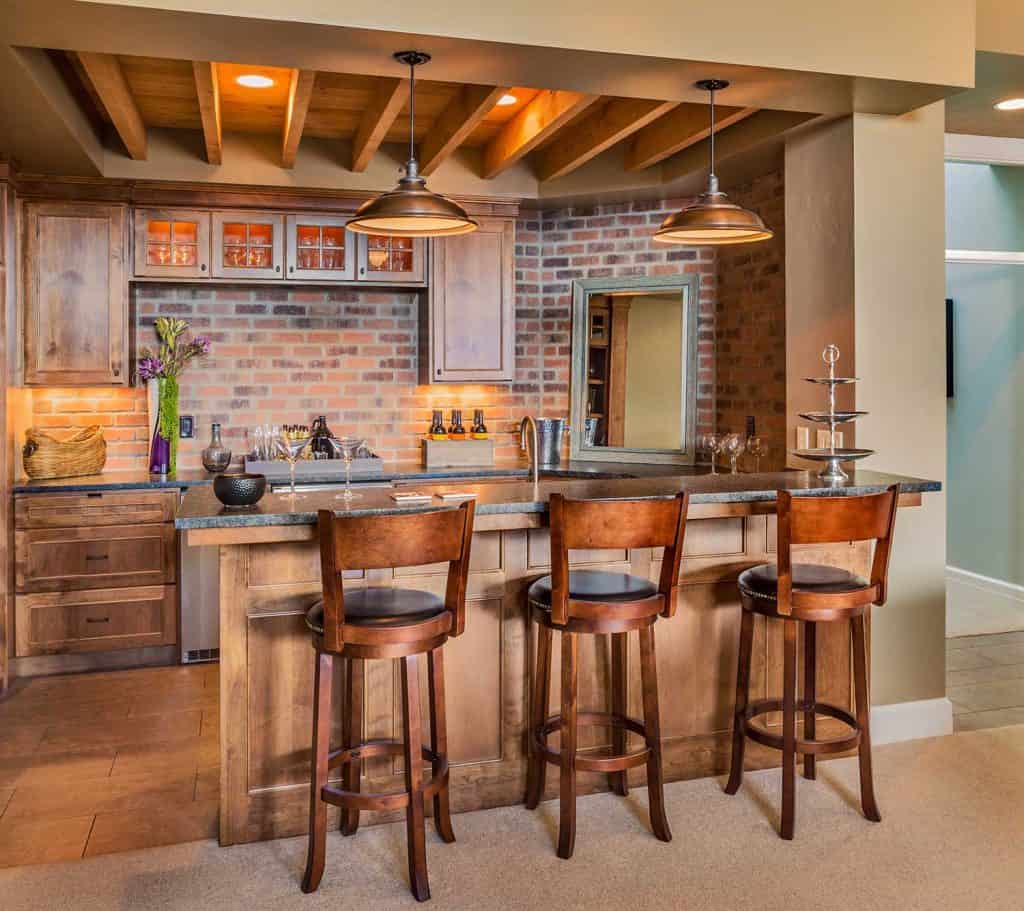 This interior isn’t inside a home, but rather a priory that is located in England. Even though it’s not a home, it offers a unique take on how you can work wooden support beams in a vaulted ceiling. Most interior designers work with the idea of hanging lighting off the ceiling beams. The priory kicked it up a notch by getting artwork and banners to hang up from the beams. While you don’t have to go full RenFaire with the concept, it is a cool idea to consider.

Ceiling beams are great for a stylish twist, but people often just assume that they are an accent to the ceiling. However, there are other ways to make beams work for your home. In this case, an architect realized they would need a ceiling beam around the area to divide the living room, kitchen, and bar area. This designer used the ceiling beam to create a gorgeous barrier and divider between the two open layout rooms. It is a chic look that keeps things super modern. 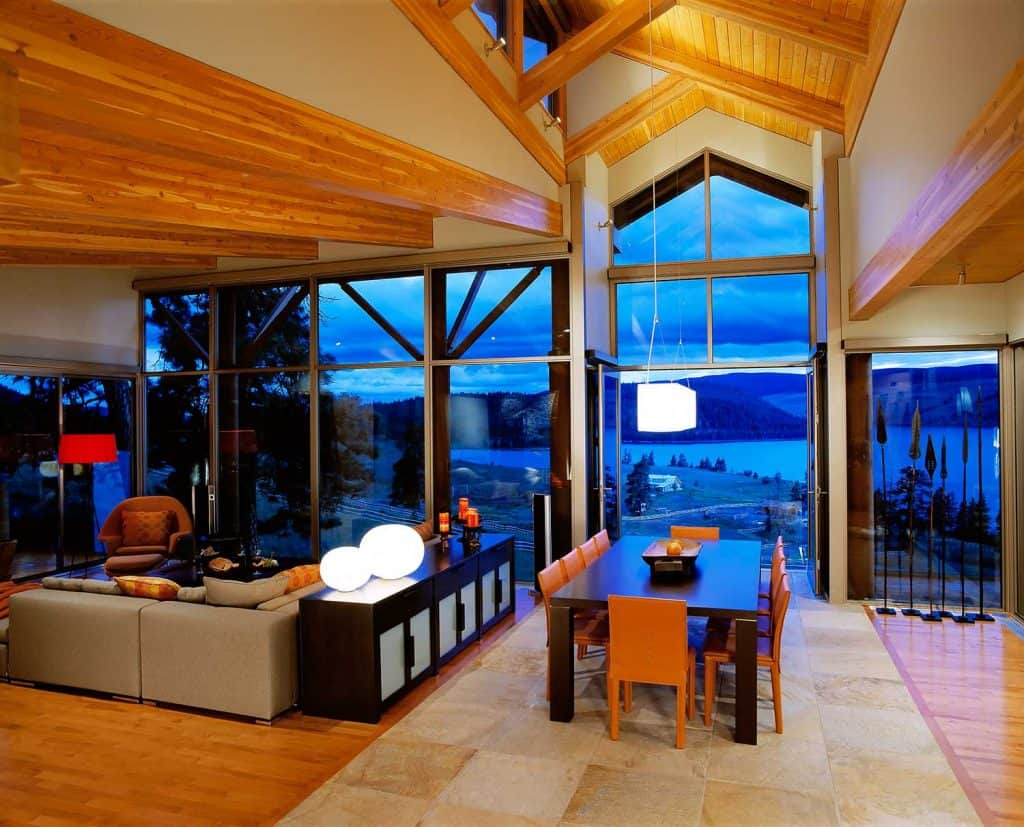 Are you tired of ceiling beams that all have the same stripey look? This architect was too and decided to do something about it. Instead of making the beams a more structured and unified thing, this room featured ceiling beams and texture changes in a wider range of shapes. It was a way to help add movement to the structure of the building. Since this architecture focuses on geometry, it was a good way to make sure that the home has a sleek look that makes a statement.

We suggest pairing this type of look with geometric decorations.

Click here to get a geometric rug from Amazon.

Most ceilings with wooden beams tend to make their statement by contrasting the ceiling color and the beam. It’s a reliable look that makes sense in most homes. This designer took a different take on the classic contrast by adding wallpaper to the ceiling portions between the support beams. Doing this with geometric wallpaper turns the ceiling into a major focal point of the room and adds a new dimension of cool to the home. We suggest doing this with 3D wallpaper for added effect.

Painting ceiling beams is not something new, but this painter took a different approach than most. They used a dual-painted look to make the ceiling beam stand out among the room’s mostly-white accouterments. To add a more surreal touch, they painted the beam’s center a lighter color than the outside. The result was a beam that almost looks like it was floating in the air!

Sometimes, a renovation can lead your home to get rid of a ceiling beam for one reason or another. This is totally fine and part of the evolution of your home. This architect chose to go green when it came to the way they updated their new room. Instead of tossing out the wood as refuse, they turned it into a neat lighting setup. Wrapping light bulbs around the beam gave this industrial chandelier a uniquely gritty look that still has an understated elegance to it.

Let ceiling beams steal the spotlight or accentuate your room’s look with accent colors in the beam work. Either way, you’ll find that a little creativity goes a long way toward supporting your home’s style.

22 Contemporary Coastal Living Rooms That Will Inspire You

How Big Is A Jacuzzi Tub?

32 Beach-Themed Bedroom Ideas That Will Inspire You (Picture Post)

How to Paint or Restain Stair Railings