Whatsapp
We may get commissions for purchases made through links in this post.

Your porch light typically gives off a pale, yellow glow. That’s the norm, but did you know it’s not your only color option? Depending on the color you set your porch light, that hue can stand for different things. What does the color of a porch light mean? We researched this topic to find out the meanings that you need to know!

Here are the various colors of porch lights as well as their meanings:

Ahead, we’ll take a deeper dive into the above porch light hues, so you know when to turn yours on and what it means if you do. You’re not going to want to miss it! 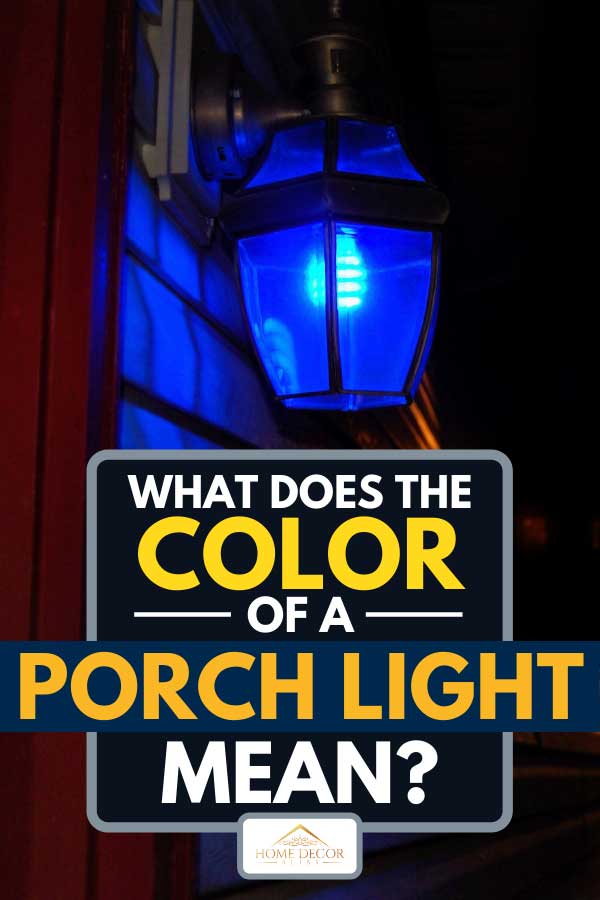 What Does a Blue Porch Light Mean?

Turning your porch light blue can represent one of two things. According to Enlightened Landscape Lights, blue lights are for autism awareness. This began when the United Nations General Assembly in 2007 officially declared that April 2nd is now World Autism Awareness Day.

It’s common to see blue porch lights in April for autism support then, especially on April 2nd. Since the entire month is Autism Awareness Month, don’t be surprised if neighbors keep their blue porch lights on all month. You can do the same too. \

In a 2017 article from ABC 10, Placer County, California residents had turned their porch lights blue to represent respect for police officers and their loved ones. That’s another reason you might see blue porch lights around town.

What Does a Green Porch Light Mean?

Every November 11th, residents in the United States honor our country’s veterans on Veterans Day. Besides engaging in celebrations and memorials, you can also turn your green porch light on that November day or all month long.

Enlightened Landscape Lights mentions that green lights might make a reappearance in May for Lyme Disease Awareness Month. The Light Up Green campaign is not just a nationwide occurrence, but a worldwide one.

Not sure how to size your porch lights? Check out this article: How Big Should a Porch Light Be?

What Does a Red Porch Light Mean?

You can turn your porch light red a few times a year as well. One of these is in October for Halloween. Another is in February. No, not solely for a Valentine’s Day decoration, but for American Heart Month too.

The American Heart Association asks for cities to turn red each February to bring awareness to heart health, so whether that means decorating your home with red or changing the color of your porch light, you have plenty of options. You might just inspire your neighborhood to paint the town red in solidarity!

We do want to take a moment to mention a myth associated with red porch lights and gun reform.

WUSA9 in Washington, D.C. dispelled a long-standing rumor that having a red light on meant your home has no guns within. At the time this article was published (2018), WUSA9 mentions that a meme had been circulating online, talking about how red porch lights were supposed to represent gun reform. The meme had been in existence for two years prior, since 2016.

By doing some digging, WUSA9 was able to uncover that the message behind the meme is false. Thus, if you see a home with a red porch light, it has nothing to do with guns more than likely. Instead, the light is probably for American Heart Month.

What Does a Purple Porch Light Mean?

Another color option you have for your porch light is to turn it purple. This is for domestic violence awareness.

October is Domestic Violence Awareness Month, so it’s most common to change the porch bulb color at this time. Not only are you bringing awareness to the horrors of domestic violence, but remembering those who have died from it as well as honoring domestic abuse survivors.

Rather than shop for purple bulbs, buy blacklights instead. These will glow a true purple.

Besides the lighting, you might want to upgrade your porch in other ways. Read this: 31 Modern Front Porch Ideas You Should Check Out [Picture Post]

What Does a Blinking Porch Light Mean?

What if you see a blinking porch light in the neighborhood? Is this a sign your neighbor should replace their light because it’s going bad?

While that can sometimes be the case, a blinking or flashing porch light is a recognized emergency signal. Someone will flash their porch light when trying to attract an ambulance, firefighter, or police officer to the premises.

Come Halloween, some people like to decorate their porch with flickering porch lights. Or you could try and generate the effect of a flickering flame for decorative purposes, by installing a cool flame-like light porch like this one –

Porchlight colors like red, blue, purple, and green represent all sorts of important matters. From heart health to honoring veterans, domestic violence awareness, and more, if you decide to change the color of your porch light, now you know what it means.

Whatsapp
We may get commissions for purchases made through links in this post.

How To Get Grease And Oil Out Of Carpet

Should You Glue Or Nail Baseboards?

15 Gorgeous Coastal Floor Lamps You Should Check Out

How Much Driveway Sealer Do I Need?