Putting together a stylish living room takes more than just having snazzy furniture. It needs accents like vases, throw pillows, and maybe a sleek bookshelf to truly look put together. Among many interior designers, a major sticking point is the simple throw pillow. Throw pillows are excellent for adding a splash of elegance to a home, but do they all need to match?

Though it can always help to have matching throw pillows, you don't have to match them. The more important concept to keep in mind is that you should have them coordinated in one way or another. This may include using similar patterns in different colors, matching the colors but having different patterns, or just matching pillows to different design elements in your room.

Throw pillows may be small, but the impact they make on your home's look is pretty big. Isn't it about time you learned how to coordinate them like a pro? Keep reading to learn how to do just that. 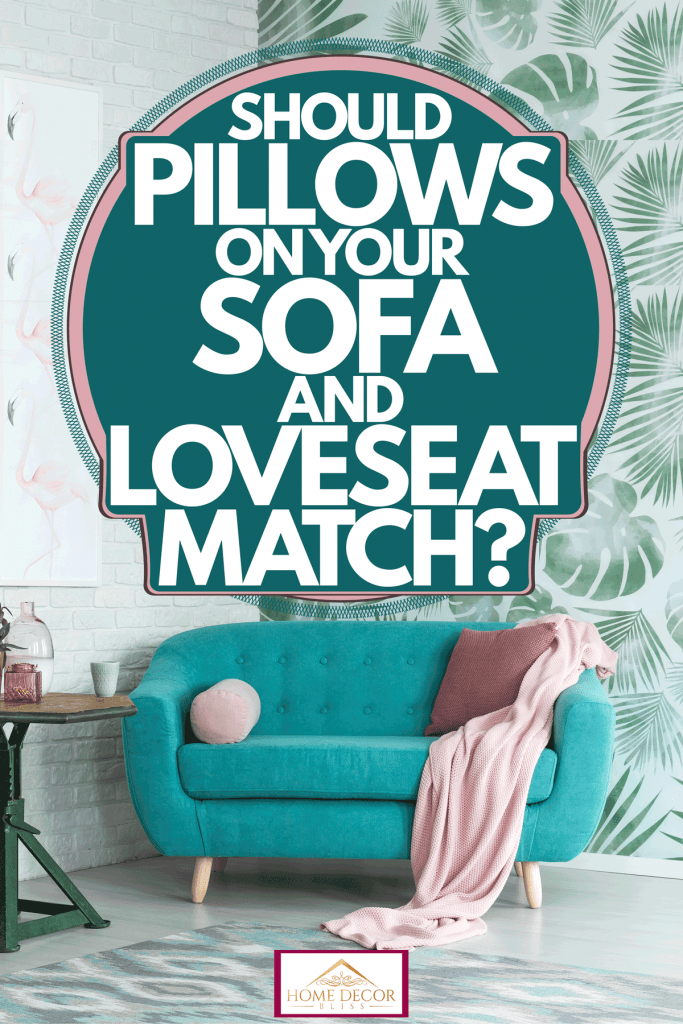 How Do You Arrange Throw Pillows On Sofas And Loveseats?

When it comes to coordinating your throw pillows, there are several options that are considered to be tried and true. Most major interior designers use the following options to arrange throw pillows.

Matching color and texture on each throw pillow is an easy way to make sure your place looks put-together. However, it can be a little monotonous. While this is usually a safe option, it's best to steer clear if your room already looks heavily matched. For example, if you want to use this option, you might want to make sure your throw pillows don't match the rug if the curtains already do.

Buying identical throw pillows is a cinch. Most manufacturers sell pillow sets in sets of two.

Click here to get a pair of matching pillows on Amazon.

There are several ways to play with this option. A monochromatic effect is a great choice for homes that have a living room with multiple colors of the same palette. On the other hand, rooms with multiple colors may want to try matching the texture but diverging from the color wheel. This adds a little pop of color and dimension to your room's design.

The big drawback about monochromatic looks is that you often won't be able to buy sets of pillows. Each pillow will have to be bought individually in most cases, which can make this a bit of a hassle. Even so, it's hard to ignore how stylish the finished result can be.

If you don't want to diverge too much from the "tried and true" trick of having all matching throw pillows, the next safest bet is to get pillows of different patterns featuring the same color palette. This is one of the more modern ways to arrange pillows, not to mention one of the most popular ways pillow sets are sold.

People who are looking for a quick and easy way to pick up a set of matching pillows will love getting a coordinated set. It's a fast and simple way to make sure that everything involving your decorating session goes easily.

Click here to get a throw pillow set on Amazon.

It's hard to go wrong with having throw pillows that all carry the same color, especially if you jazz it up with different textures or designs. This tends to be particularly popular during the holidays since most homes tend to want Christmas decorations in their living room. Throw pillows are included in these plans.

Of course, this doesn't mean you have to stick to Christmas decor to make this work. It's fairly easy to create a Southwestern theme using classic woven patterns. The same can be said about most boho themes, too.

Click here to get a set of four Southwestern pillows on Amazon.

Do You Have To Place Throw Pillows On A Sofa?

While there are tons of looks that involve adding throw pillows to bring out the color of a sofa, the truth is that you never have to put throw pillows on a sofa if you don't want to. Sometimes, just tossing a throw blanket on the sofa is a smarter decision. This is especially true if you already have a throw pillow on the love seat or use a lot of cushiony accents in your living room.

There are plenty of awesome interior design examples that involve throw pillows on a loveseat, but not a sofa. If you want to cut down on throw pillow usage, then picking one or the other is totally acceptable.

This is actually a source of contention and debate among interior design groups. Most people agree that throw pillows are a must if you want to style a couch in an elegant manner, while a smaller portion tends to disagree. In terms of necessity, the best way to look at it is by the type of style you enjoy.

It's true that there are some home design styles that add an emphasis on minimalism, especially when it comes to modern decoration. Hypermodernism and "Space Age" decor might not need throw pillows. On the other hand, Victorian styles or modern contemporary styles? They emphasize coziness, which means that they tend to require more textiles. This includes pillows.

How Many Throw Pillows Should You Put On A Loveseat?

There is no single "best number" for the number of throw pillows a loveseat or couch needs. However, there is a rule that most designers follow: use an odd number of pillows. Studies showed that pillows arranged in odd numbers tend to look more natural and inviting than pillows in even numbers.

The reason why is rather simple. When you put two pillows, there's a tendency for the layout to look incomplete, or heavily manufactured. While some symmetry is good, having constant even numbers of pillows tends to look cliche. No one wants to have a living room that gives off a "Barbie Dreamhouse" vibe, right?

Do Pillows Have To Be The Same Size?

While this often adds a more cohesive look to your home, pillows do not have to match in size. In fact, doing so can take away the chance to add some visual stimulation and depth to your home. At times, having an extra-large pillow (especially a bold-colored one!) can be a good way to grab attention for your couch.

Bottom line? If you were holding back from getting a set of pillows just because one is smaller than the other, don't!

How Should You Position Throw Pillows On A Couch?

This is all up to you. Adding one throw pillow on each side plus one in the middle is a popular choice. However, you can also choose to put one in a single corner, stack a bunch on one side, or just add a small row of pillows across your couch, too. It's all about finding out which looks best for your couch. Experiment a little, and try each look. You'll find one that works well for you.

Throw pillows are strange things. Just positioning them a different way can make a huge impact on how your living room looks. So, it should come as no surprise to anyone that choosing the pattern, texture, and colors of your throw pillows can make a massive impact on the overall ambiance of your room. It's a good thing to take your time with.

Though there are many different ways to match or coordinate your pillows, the truth is that there is no one "perfect" way to do it. Like with all things in the interior design world, there are plenty of ways to create a look that dazzles. You just have to pick the right one for you. As long as you love the way your pillows look, your design chops are just fine.