We all want privacy in our bedroom, but what do you do when the door doesn't stay latched? We've done some research and found some solutions. Keep reading to find out how to fix that stubborn door.

The number one reason that your door isn't latching is that it is out of alignment. There are a few common reasons for the misalignment, and most have easy solutions that you can fix yourself. Those reasons include the following:

It's not only annoying when a door won't latch, but it also prevents privacy and can lead to embarrassing moments if not corrected. Luckily, the problems are ones most people can fix on their own quickly and easily with minimal cost. Keep reading to learn about several potential solutions to your door that won't stay latched. 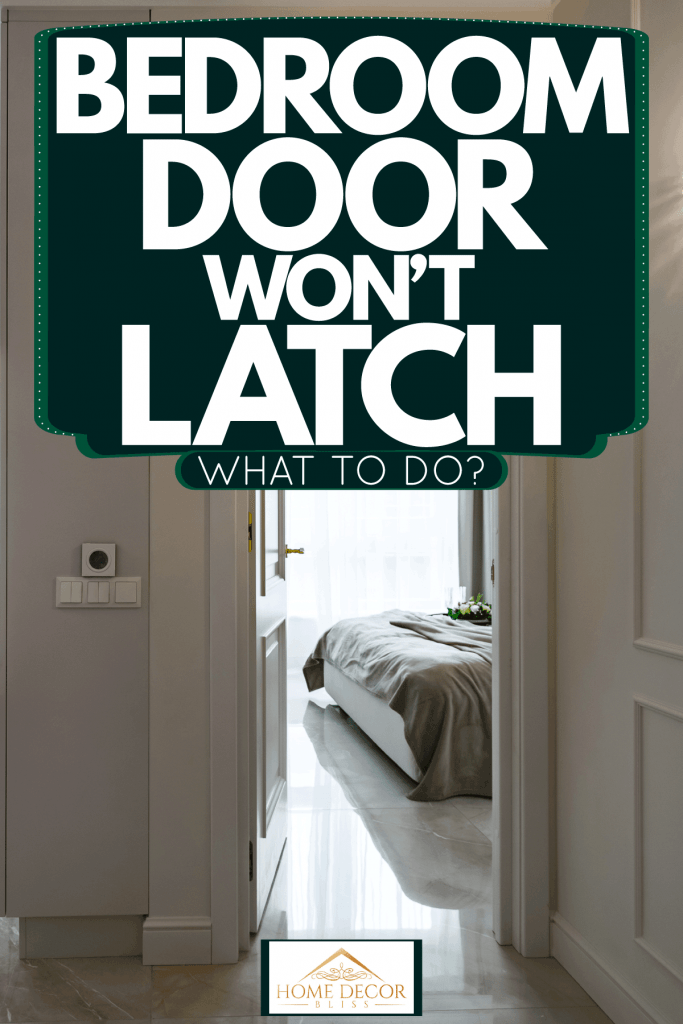 What causes a door not to latch?

Anatomy of the Door Latch

To diagnose the problem, you first have to understand the parts of the door latch. The basic parts we will discuss include the faceplate, strike plate, latch bolt, and latch bore. 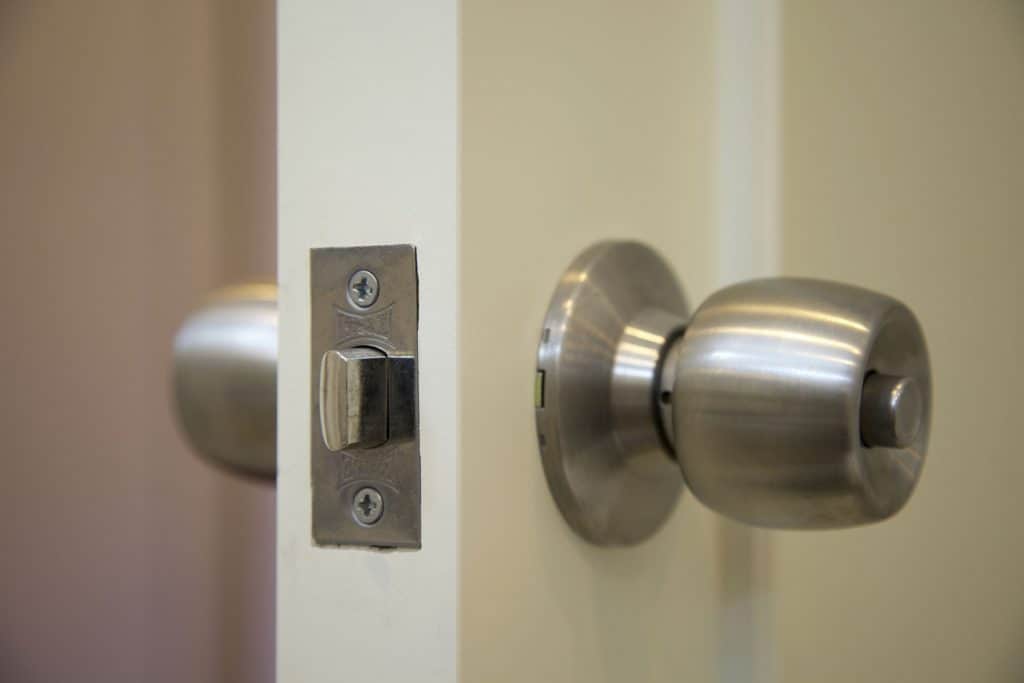 The faceplate is the metal plate on the side of the door near the latch. It surrounds the latch bore. The purpose is to protect the latch from normal wear and tear.

The latch bore, also commonly referred to as the edge bore, is the hole on the door that allows the latch bolt to protrude out and extend into the strike plate in the door jamb.

Hinges become loose over time, especially if it's a door that is used often. Screws can work themselves loose through the continual movement of the door and need to be retightened. This can also cause the screws to become stripped. A stripped screw will not stay tight in the door jamb, so it needs to be replaced.

When replacing screws, you may find that the original screw is small, probably only 1".  Therefore, it does not catch into the doorframe as tightly as possible. Replacing the shorter screw with a longer screw will give the hinges more support by catching into the wall framing to draw in the door jamb. This helps keep the door in alignment and lessens the pressure on the screws.

Latch hitting too Low in the Latch Plate

There is an easy test to see if this is the issue. Put a colored substance such as lipstick or putty on the latch. Then slowly close the door allowing the substance to rub off on the latch plate.  This allows you to see where the latch is hitting and better assess how to approach the problem.

If you don't have a metal hand file, consider this set from Libraton.

There are times when it makes more sense to move the latch plate rather than re-align the door. For instance, when the wall has moved, it could cause more issues when attempting to adjust the door. When this happens, you end up with a sagging or elevated latch plate.

Use the alignment test to determine which way to move the plate. Then, remove the plate, make any necessary adjustments to the latch hole, and reattach the plate in the right position.

Watch this helpful video to see how to fix each of the problems discussed in this section:

How do you enlarge a door latch?

A second scenario might be that you find yourself replacing your door locks, and the edge hole is too small for the new latch. This is an easy fix with a paddle bit and a drill. Insert the paddle bit into your current hole. Then, attach to the drill. As the paddle bit turns and you pull it from the door, your hole will enlarge, and you should be able to fit your latch into the new hole.

If you don't have a paddle bit set, consider this 10 piece set from WorkPro.

Find it on Amazon.

How do you fix a stuck door lock latch that won't retract?

There are a few reasons that your door latch won't retract. Two are caused by moisture. First, moisture can cause wood to swell, which can affect the latch plate. This can cause the latch to get stuck and not retract properly. To solve this issue, adjust the latch plate.

The second moisture issue is that rust within the lock mechanism can obstruct the spring, allowing the latch to retract. This requires disassembling the lock and cleaning out any debris that should not be there.

To remove rust, soak the parts in vinegar. Then, scrub the parts with a small brush to make sure all rust is gone. Next, seal everything with polish or wax to help prevent rust from occurring again in the future. Finally, reassemble and it should work properly.

Broken parts within the lock chassis could also cause your issues. If this is the case, it is probably easier and more cost-effective to replace the entire lock mechanism.

How do you realign a door? 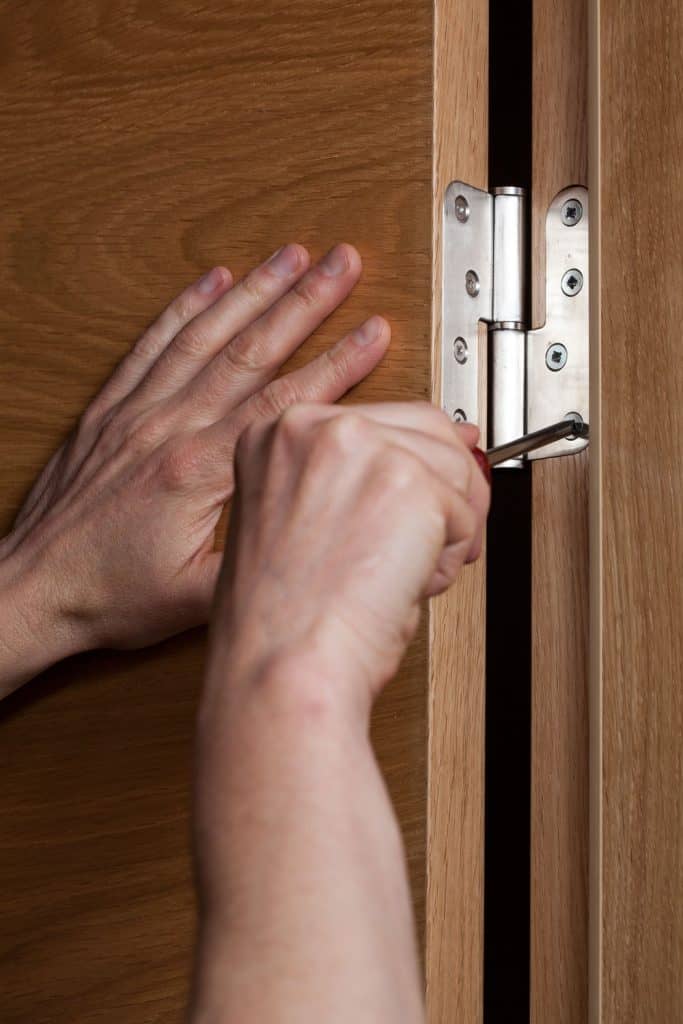 When doors are misaligned, it can create more issues than just not staying latched. It can cause doors to rub or stick, which makes them difficult to open. Besides being annoying, it can leave marks and cause the paint to rub off your doors.

The first place to start for the realignment of a door is to adjust the hinges. Try to move your door with both hands to see if you can locate the play in the door. This may lead you to your loose hinge. If not, take your screwdriver and try to tighten each screw until you find the ones that easily turn. If it continues to turn or you find yourself constantly tightening a particular screw, chances are it is stripped and needs to be replaced.

Find it on Amazon.

You can also try shimming the door facing under the hinges. Shimming involves removing the hinges and eliminating the gap between the hinge and door by inserting another object such as cardboard. Then reapply the hinges, and you should find the door is repositioned.

You could also have the opposite problem; the recess isn't large enough for the hinges. In this case, you may need to do some sanding underneath where the hinges are affixed. When the hinges are reattached, this should balance the door solving the alignment issue.

Misaligned doors are a common problem in houses that often leads to a door not staying latched. Fortunately, the solutions are easy DIY fixes. Just keep some basic tools on hand, and you will be ready to make the necessary adjustments to have your door back in proper working order and your privacy restored.

If you are into finding out about more home repair ideas, check out "How To Repair A Hairline Crack In A Porcelain Sink [6 Simple Steps To Follow]."