Garden and Roman Tubs are luxurious tubs that offer a level of relaxation unmatched by many bathtubs on the market—wondering about their differences? You are in the right place! We researched this, and here's what we've found!

The following are the differences between the garden and Roman tubs:

We'll go into great detail about the unique qualities of these two tubs in this post. We'll discuss some of the other commonalities they have after that. With that said, let's dive right in! 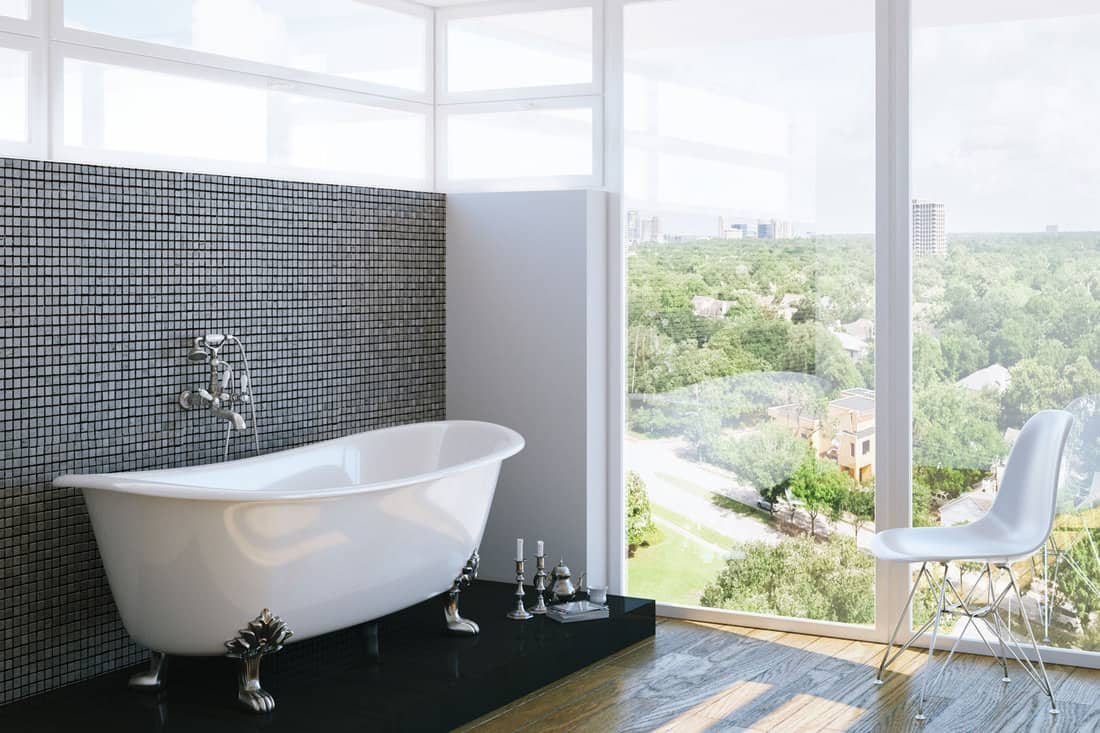 One of the best ways to unwind is to take a bath, yet purchasing a bathtub can be stressful. There are a bewildering variety of bathtub sizes and forms.

To choose the greatest tub for your purposes, you must be aware of some features of tubs on the market, and two of them are the garden and Roman tubs.

They are both deep enough for bathers to almost completely submerge themselves. These tubs are now typically oval, with a hot tub-like appearance, and are generally always found in corners.

However, they are frequently interchanged, especially for those unfamiliar with the bathtub industry. To avoid confusion between these tubs, below are some of the distinctions you may consider to differentiate.

The French aristocracy and elite started using garden tubs in the early 1,700s.

The term comes from the fact that they were initially positioned in or above the garden so the user could take in the view while taking a bath. These luxurious baths had a lot of artistic flourishes.

The bathing water was drained and returned to the gardens to hydrate the vegetation.

The English adopted this notion and started utilizing these bathtubs for residential use, with the basic idea of positioning them next to windows or visually appealing areas.

On the other hand, Roman tubs are called after the baths constructed in ancient Rome.

One can anticipate being submerged in water up to their neck while sitting in a bathtub designed in the Roman style. All around the empire, Roman tubs were used by both wealthy and common people.

There were about 850 bathtubs in Rome alone by the fourth century AD. It is a particular style of architecture that existed across the empire and was an integral part of Roman culture. 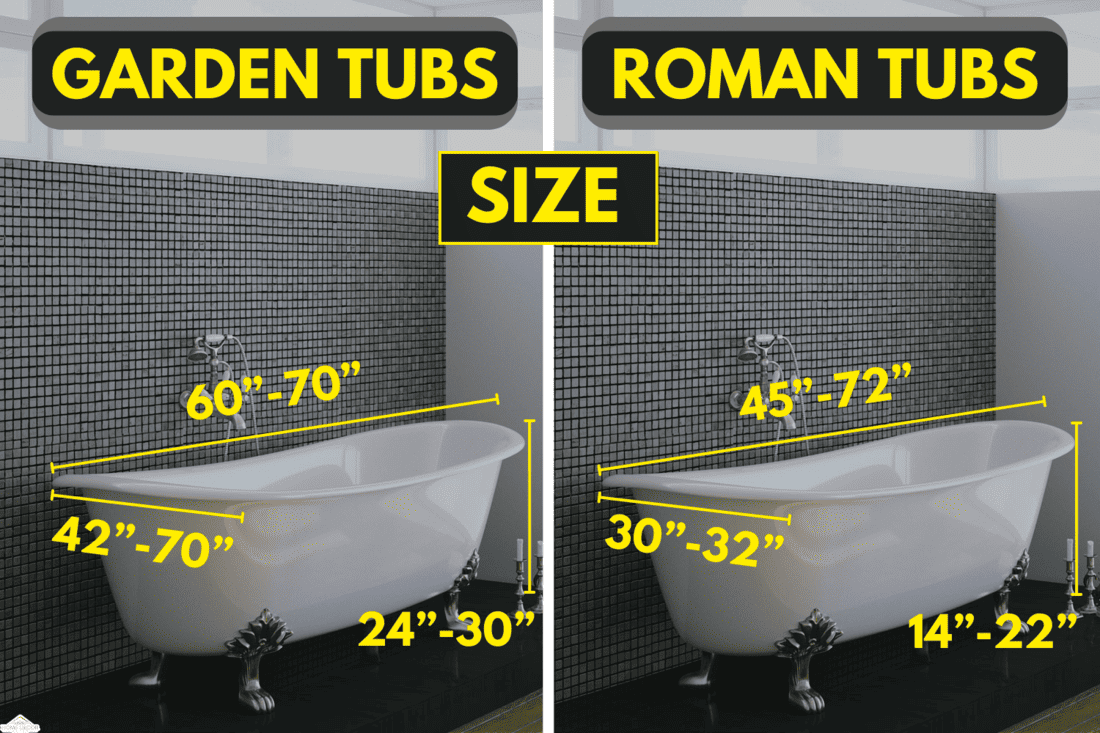 But they can grow significantly in size, with some bathtubs measuring up to 70" long and 70" wide with a 30" water depth comparable to a jacuzzi.

However, the average Roman tub sizes are 45" to 72" long and 30" to 32" wide. Also, it often offers at least 14" depth of water. Some even have overflow tubes up to 22" deep from the bottom that you can usually immerse to your chin.

As you compare, garden tubs are longer, wider, and deeper than Roman tubs. This means in terms of water capacity; garden tubs have more volume too.

Moreover, for these reasons, you require additional space in your bathroom for your garden tub.

Moreover, for these reasons, you require additional space in your bathroom for your garden tub. That is why you need to consider the functionality of your bathroom's prospective design before purchasing any of it.

Traditionally, garden tubs were built of natural materials, such as wood, and a range of stones, such as granite and marble. Other options are acrylic, stone resin, etc. The least expensive alternative is plastic.

Roman bathtubs can be manufactured from various materials, but the most common ones are enameled cast iron, acrylic, and stone resin, also available in garden tubs.

The most popular option for the Roman tub is typically enameled cast iron tubs.

Enameled cast iron is a material that is exceptionally robust, easy to clean, and has exceptional heat retention capabilities, albeit its weight might put some strain on the floor weight when the tub is filled.

Tubs made of acrylic have a lot of appeals because they are available in various forms, colors, and patterns.

The drawback of acrylic is that it doesn't retain heat, as well as stone resin or enameled cast iron. It is also not as resilient.

Stone resin is robust, provides excellent heat retention, and is flexible enough to mold into various designs and shapes. It combines the finest qualities of acrylic and enameled cast iron without drawbacks. 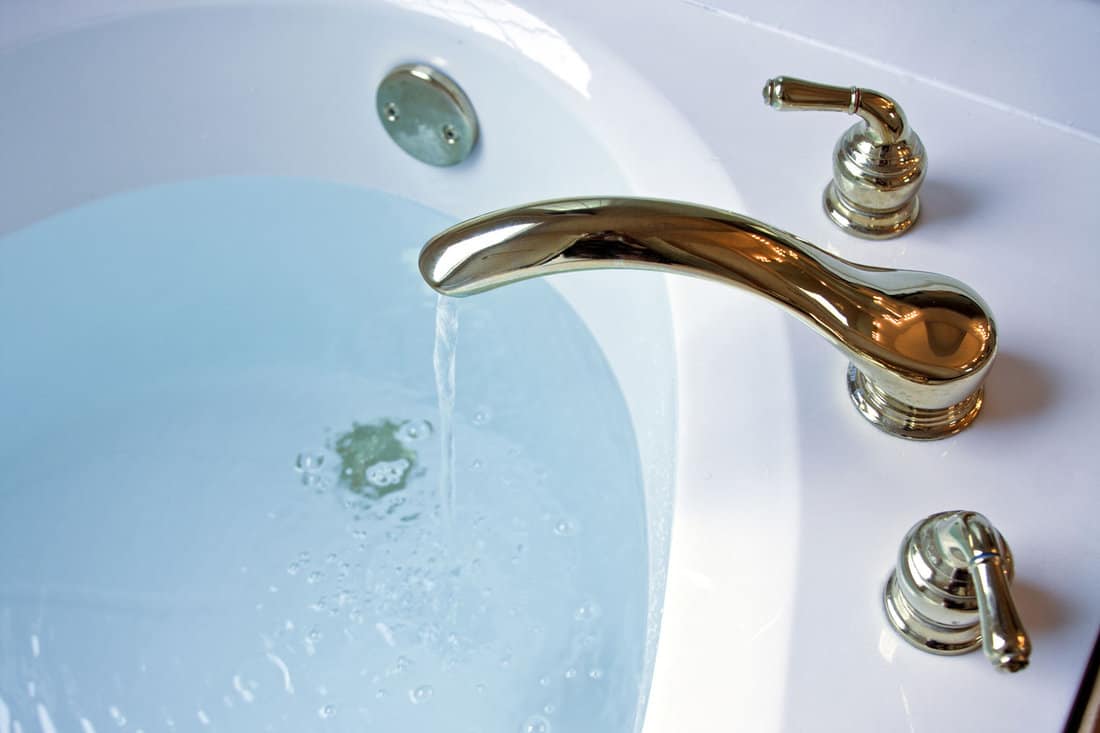 Garden and Roman tub faucets resemble one another, making it challenging to distinguish between them. Both faucets of these tubs are deck-mounted, which implies that they are positioned close to or on the tub's rim.

They commonly have two handles, but some manufacturers provide single and triple-handled faucets.

Installation of these faucets requires at least three holes—one for each handle and one for the spout. You need four holes if you want a Roman tub faucet with a sprayer.

The sole distinction between these two varieties of tub faucets is the length of the spout. Simply put, the spouts on garden tub faucets are shorter than those on Roman tub faucets.

To give you some ideas, the table below has some spout sizes of collections that come with both garden and Roman tub options.

Prices for soaking tubs vary widely due to the vast range of sizes available. The garden tubs can cost anything from $600 to $13,000.

While the typical cost of a Roman bathtub is between $100 and $20,000, both prices do not include installation fees.

Of course, there is also the cost of installation and any remodeling of the bathroom necessary to make room for it or be suitable.

Such as the costs of strengthening the floor to support the weight of the much larger tub when it is filled with water.

The soaking tub's type, intricacy, and size affect the installation expenses. The typical price to install a bathtub is $3,600. The price can vary from $1,200 to $6,200, tending toward the pricey if installation requires adjustments.

Both garden and Roman tubs are luxuries. As a result, it's uncommon to find one that's both inexpensive and as opulent as those you see at a resort.

Garden Tub Vs. Roman Tub: What Are The Similarities?

Garden and Roman tubs have few distinguishing features, but they have a lot in common too, which will now outline below:

Using these oversized bathtubs, you can fully submerge your body for a long soak and reduce your tension after a stressful day.

Garden and Roman tubs can help to massage your muscles and joints or offer a soothing experience, especially with Epsom salts.

Technically, both garden and Roman tubs are lavish centerpieces that give a bathroom a feeling of warmth and tranquillity among modern designers.

These practical works of art may boost the appeal of your home's interior design and its selling value to potential purchasers. 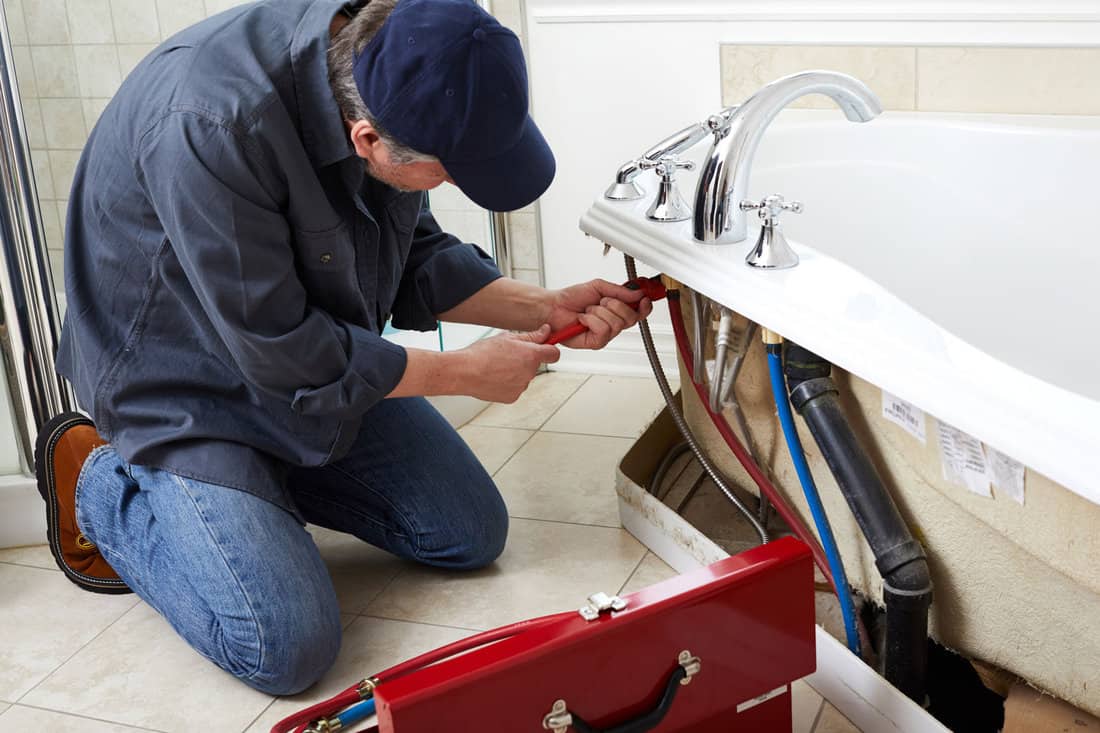 Installing any of these tubs will necessitate extensive skills or the assistance of professional plumbers. A manufacturer may also use hefty materials to build the tubs in one piece.

Moving a large, heavy tub to an upstairs bathroom might be difficult.

To withstand the weight of the heavy tub once it is filled with water, you must also make sure that your installation area has the necessary structural framing support.

Due to their sizes and volume, you will anticipate a large hike in your water bill because all water needed for these tubs must be paid for.

Moreover, if you want to bathe in heated water, this will add to your electricity bill. It won't be very soothing if you can't obtain a hot bath, which very much negates the purpose of having one.

Not Too Many Attachments

Garden and Roman tubs primarily serve the purpose of offering a soothing, in-depth bath. As a result, they rarely have attachments that would make the calm experience of bathing uncomfortable. 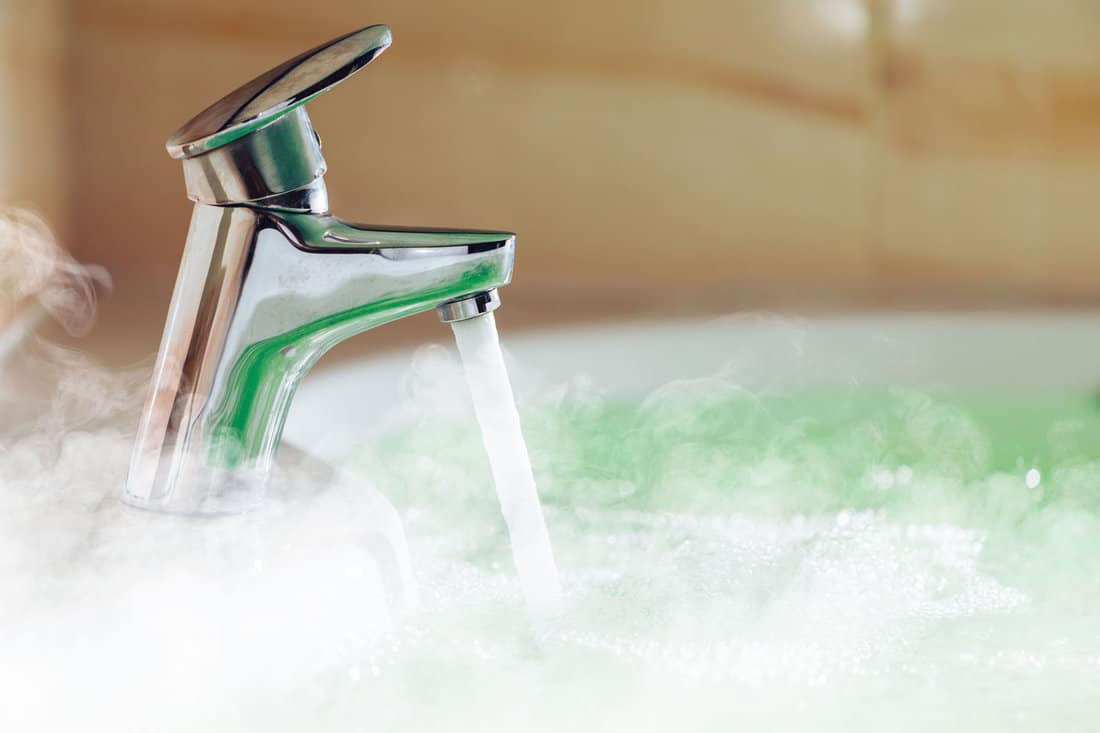 Just like having no jets on these tubs. The lack of jets will restrict the tub's therapeutic choices.

Additionally, if you want to add personalized jets to these tubs, keep in mind that if it is not regularly cleaned and maintained, they can attract mold and mildew.

Although installing them is probably doable if you have the funds, very few pre-made garden and Roman tubs would include these amenities.

They may not be your best option if this is essential to you.

To Wrap It All Up

Roman and garden tubs are both great options. Both are larger than other average models that provide comfort and are well-liked as upscale bathroom amenities. With the extensive distinctions covered above, you may determine which tub best suits your interests.

But no matter what you choose, the only thing that matters is that these tubs help you accomplish what they are designed to do: relax.

Before you go, check out some interesting topics we have below:

Porcelain Vs. Acrylic Tubs – Which To Choose?

How To Clean A Jetted Tub Filter In 5 Steps