Ceiling beams will often remain hidden because they are primarily just a structural part of the home. But you can also use ceiling beams for style by adding your own decorative beams. If this is the case, you might wonder how to install ceiling beams with the correct width and spacing. We have thoroughly researched just how wide your new ceiling beams should be and how far apart you should keep them.

When installing your own ceiling beams for style, the best width and spacing for them should change based on the size of the room. There is no established formula, but make sure the beams appear to be natural structural supports. For example, larger rooms need wider beams. Since most ceilings are around 9 feet tall, give or take a foot, the ideal width for your decorative beams will likely range between 4 and 6 inches wide.

Many interior design styles can use decorative ceiling beams to create the right atmosphere, like a cozy farmhouse scene. But choosing the right beams can get tricky. Keep reading to learn all about the unique features of faux beams, how to determine the ideal size, and how to calculate the size of new beams. 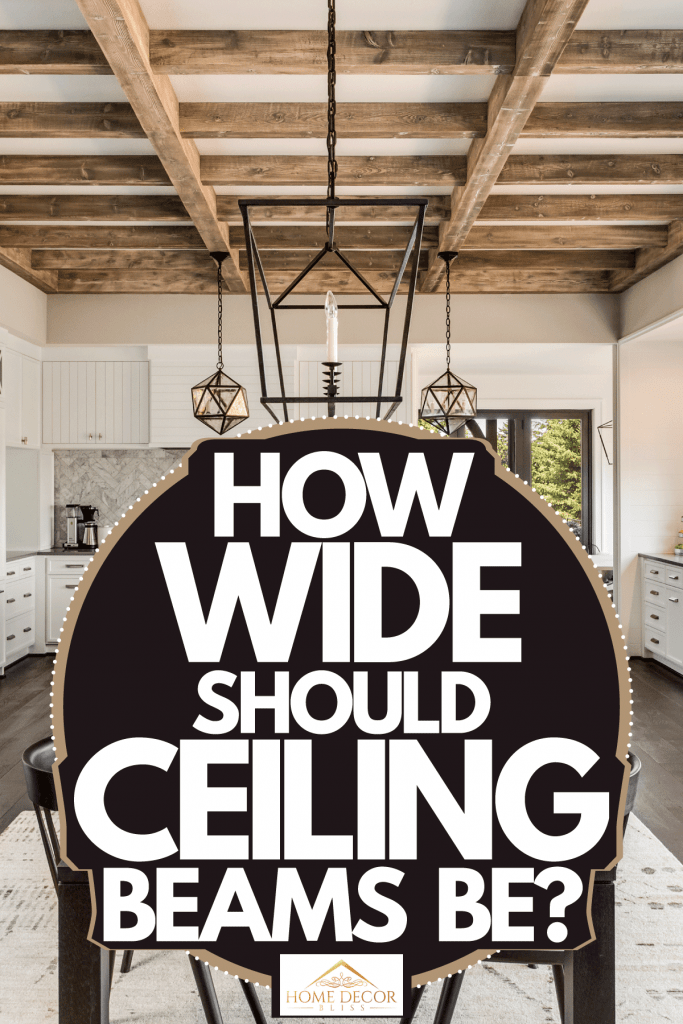 How do I pick the right size ceiling beams?

Sometimes, ceiling beams are deliberately left exposed to add personality to a room. These beams will already look perfect because they are actually being used as a support structure. You can read the article "17 Wood Ceiling Beams Ideas" to learn how it's possible to work with existing beams. So, if you already have the means to use your actual beams, it may be best to resort to them.

Unfortunately, exposing beams can get a little expensive. It may even be necessary to remove a lot from your ceiling in order to access and then treat the actual ceiling beams. It just isn't practical, which makes decorative beams a common alternative.

Decorative beams aren't very expensive because most of the time, you'll be adding faux beams. They are named literally since these faux beams are not made of real wood. Instead, they are simply stained to imitate the appearance of real wood.

So, like the product itself, you’ll have to choose a size and spacing distance that also imitates a support system made of real wood.

How do I calculate ceiling beam size?

You’ll have to consider the length, width, and depth of your ceiling beams. You should try to size your decorative beams in such a way that they seem like they could legitimately hold up your ceiling.

However, real ceiling beams have to prioritize your safety. So, they are sized in such a way that they will offer genuine structural support. For example, that calculation would involve any trusses. A truss is just an assembly of support frameworks. All of this is necessary if you need to think about load stress, such as a bunch of snow bearing down on your roof during the winter.

But you don’t have to be so precise. The size of faux beams doesn’t actually have to support heavy loads. They just have to appear like they can, so you only have to keep your ceiling beams proportionate to the room.

The color may affect this look, too, since brighter colors are more spacious, and darker colors make the ceiling appear smaller. To learn more, you can read the article "What Color Should Ceiling Beams Be?" to help create the right level of spaciousness for your room. 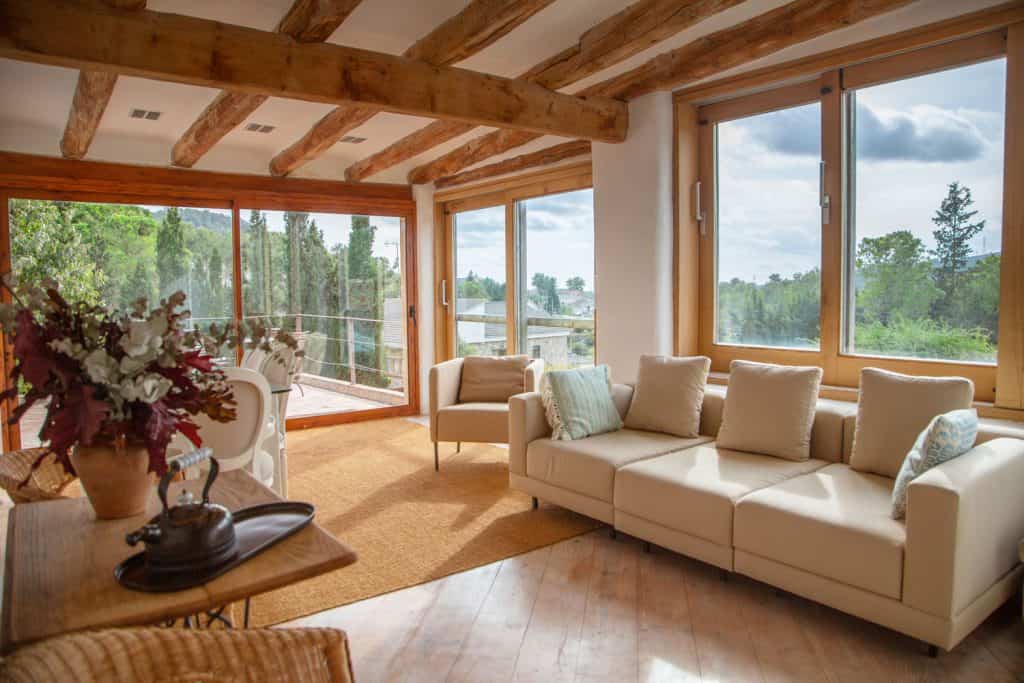 In any situation, your ceiling beams will need to have the same length as your room. If the beams are too short, then they will look disproportionate compared to the ceiling. It will become distracting instead of stylish because it is immediately clear that your beams are not natural.

Keep in mind that the length of actual ceiling beams will always extend past the total length of any given room. This way, the ceiling beams can lay on the rest of the structural framework of the room.

Find the Correct Width and Depth

The width and depth of the ceiling beams are a bit more open to interpretation. But the ceiling height of any given room will determine just about everything below. Likewise, the width of your decorative beams will only look right if you consider the ceiling height.

The taller a ceiling stands, the wider and deeper the ceiling beams need to be in order to provide the best support. Generally speaking, most ceilings are either 8 or 9 feet tall. More expensive homes might have ceilings that are 10 feet or above.

For a typical ceiling around 9 feet tall, you can have decorative beams between 4 and 6 inches wide. The depth will then be determined by this width to look proportionate. Anything wider than 6 inches would just appear unnecessary and stand out like a sore thumb.

However, you can still use decorative beams that are thinner than that, so long as you use more beams in the room. Just make sure they don’t appear too busy. That’s why you will also be able to determine the width and depth based on the spacing between your beams.

How much space should be between beams? 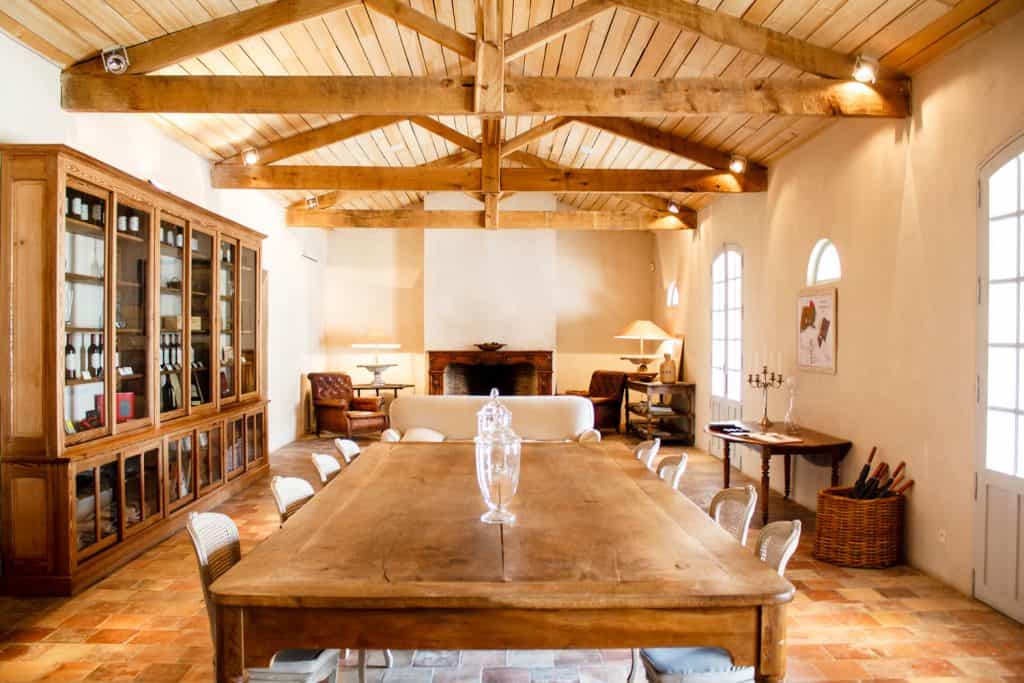 Most of the time, beams are spaced around 3 feet apart. This can sometimes grow to a distance of 8 feet. So, the spacing of your beams also needs to reflect that proper structural support.

For example, you would never want to group a large number of wide beams together. It would look too clunky and unrealistic. On a ceiling, it would look even more cluttered, too. Most rooms do not benefit from a busy design.

On the other hand, you could add more ceiling beams per room if they are thinner. They can still look structurally sound but won’t look nearly as busy if you put them closer together.

Sometimes, your room can have an especially large span. The span of a room refers to the direction your ceiling beams will be running. If your room happens to be larger than traditional sizes, you can still add beams that run opposite to the long side of the room.

Since you need to make sure your beams run the room's length, it could look structurally awkward if there are no perpendicular beams. Realistically, a row of extra long beams wouldn’t provide enough support on their own. They would need cross beams near their center to keep from breaking.

You should account for these cross beams when you decide on the best spacing for your larger rooms. In a smaller room, this shouldn't be necessary. This is another feature that would only make the ceiling appear too busy in something like a kitchen. Keep in mind that kitchens are often much smaller than most rooms in the rest of the home.

What size are faux beams?

When it comes to real wood, it can be difficult to find the right species that will offer broader widths. However, faux beams are typically made of HDP, which stands for high-density polyurethane.

Specialists like Polyurethanes agree that polyurethane is highly versatile and used throughout our daily lives. This means you can hand pick a custom size for your faux beams. In fact, remember that faux beams are generally hollow, so even the wider beams won’t be heavy and clunky. 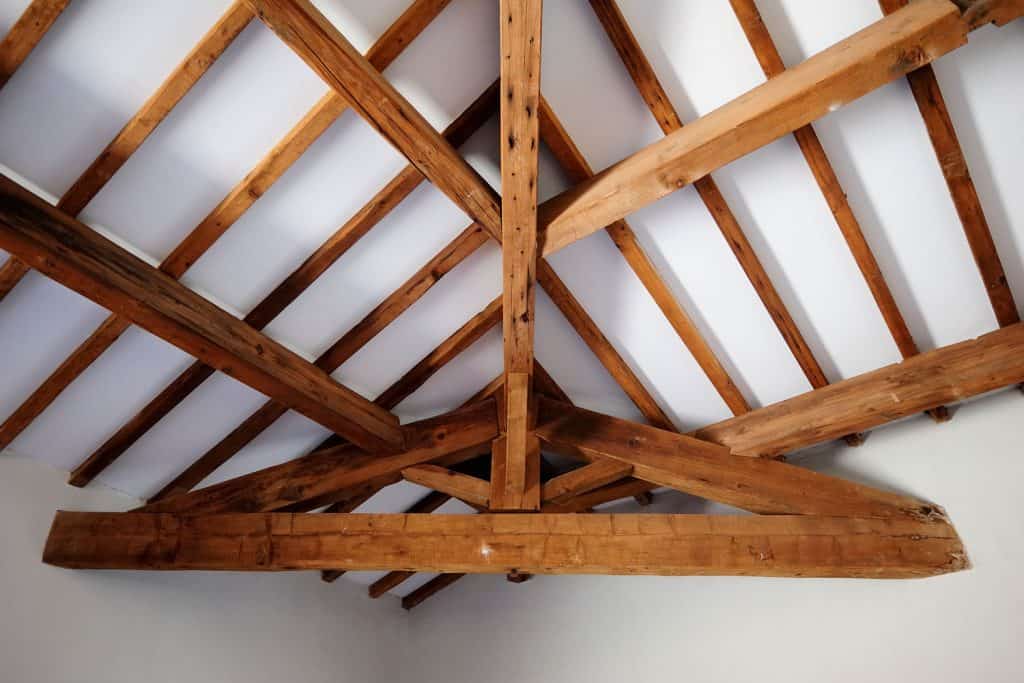 Wood is a major part of most interior designs, so exposed ceiling beams aren’t as bold as they sound. They create a handmade, cozy mood that is comfortable in many styles, ranging from rustic cottages to coastal beach house scenes.

Now that you know how to choose the right ceiling beams for you and space them, they’re just another simple tool to help you add your personality to the room.