In October, an evening walk through your neighborhood will probably be filled with sightings of Halloween decor. But you might see more than carved pumpkins illuminating front stoops.

Should you see a purple porch light, you might wonder about its meaning. We did some research and discovered some curious information.

A purple porch light generally represents awareness of domestic violence. Porches are lit by survivors of violence, for loved ones lost to violence, or by concerned citizens to bring attention to this problem. In addition, purple light promotes awareness of pancreatic cancer in November.

The history behind why purple lights are used to promote domestic violence awareness is fascinating, and we'll take you through it from the beginning. You might also be wondering about historical meanings and symbolism for purple light, and the meanings of other porch light colors. For the answers, keep reading ahead! 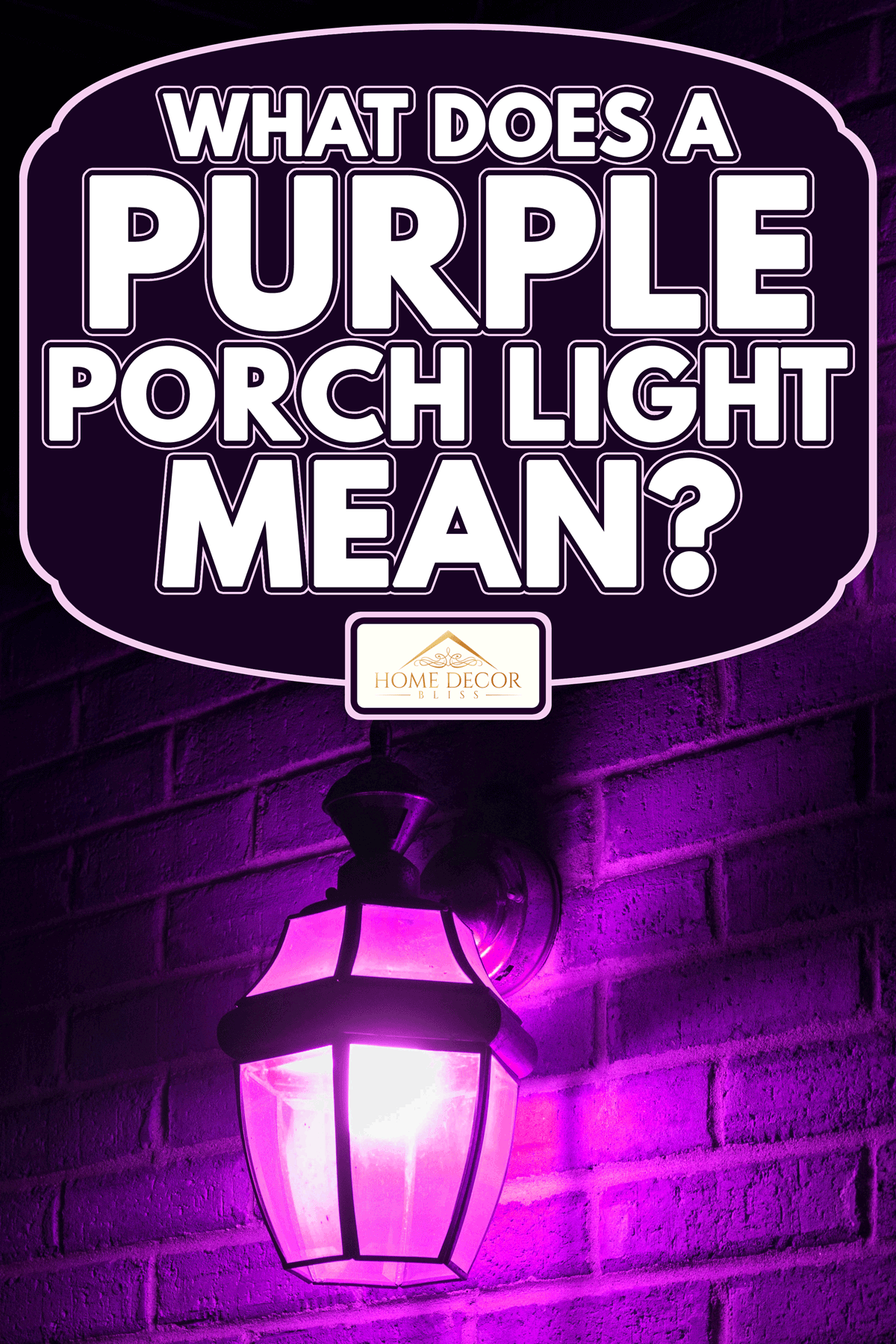 You can light up your porch in all kinds of colors. It certainly doesn't have to be purple!

It's best to know what kind of message you're sending when doing that, so check out our guide: What Does The Color Of A Porch Light Mean?

The History Behind Purple Porch Lights

The Covington Domestic Violence Task Force was formed in June of 2004 in the state of Washington by Victoria Throm and Curt Lindsley.

As a survivor of domestic violence, Throm worked with Lindsey, a pastor, to bring awareness to a problem they felt wasn't getting the attention it so desperately needed.

A subsequent marketing campaign and strategizing with the domestic violence task forces in neighboring cities led to a collaboration that created Purple Light Nights in 2007.

Every October, the task force encourages people to light up their porches with purple light. Eventually, this grew from nearly a dozen participating cities in Washington, and eventually became a nationwide awareness campaign.

The Covington Domestic Violence Task Force still works to promote the following goals, as indicated on their website:

What Does the Color Purple Represent?

In nature, purple is a pretty rare color to find. Because this color is not common, it has been viewed as a sacred color for centuries. Bourn Creative writes about how lilacs, violets, orchids, and lavender have been seen as precious plants for their rarity.

Different shades of purple are also associated with different ideas or emotions. A lighter shade of this fascinating color represents feminine energy, as well as feelings of romance and even nostalgia.

A dark purple takes on a more melancholy tone, symbolizing emotions like sadness and frustration. Brighter shades of purple are symbolic of royalty and wealth.

What Do Other Colors of Porch Lights Mean?

When strolling through residential areas, there's a good chance that you'll eventually see porch lights of many different colors. Each hue represents a different meaning, ranging from celebrating holidays to raising awareness for a particular disease.

Let's look at the most common color porch lights you might see on an evening walk through your neighborhood. 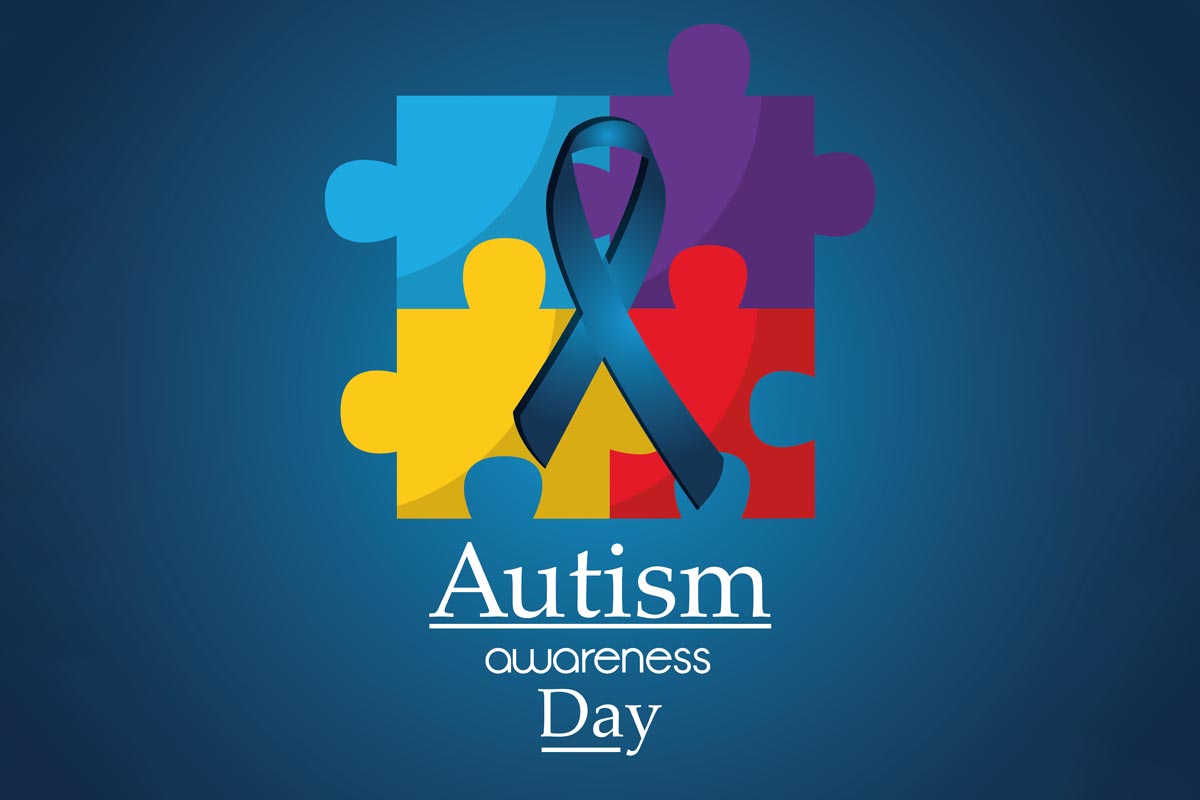 But a blue porch light can carry another meaning. Project Blue Light, a nationwide organization created to recognize law enforcement officers who have died in the line of duty, promotes blue porch lights to show support for fallen police.

Like blue porch lights, green bulbs can mean separate different things. Seeing one during March is an obvious reference to the month's Saint Patrick's Day holiday. But this color carries a much deeper meaning during other parts of the year.

Green is used to commemorate both Veteran's Day and Memorial Day each year. Planted Shack refers to the green porch lights as "a token of gratitude" for those who served.

Finally, What is Lyme writes about a Lyme Disease survivor who created the Green Light campaign to raise awareness about Lyme Disease. Every May, people are encouraged to screw in green bulbs to their porch lights to bring more attention to this disease. 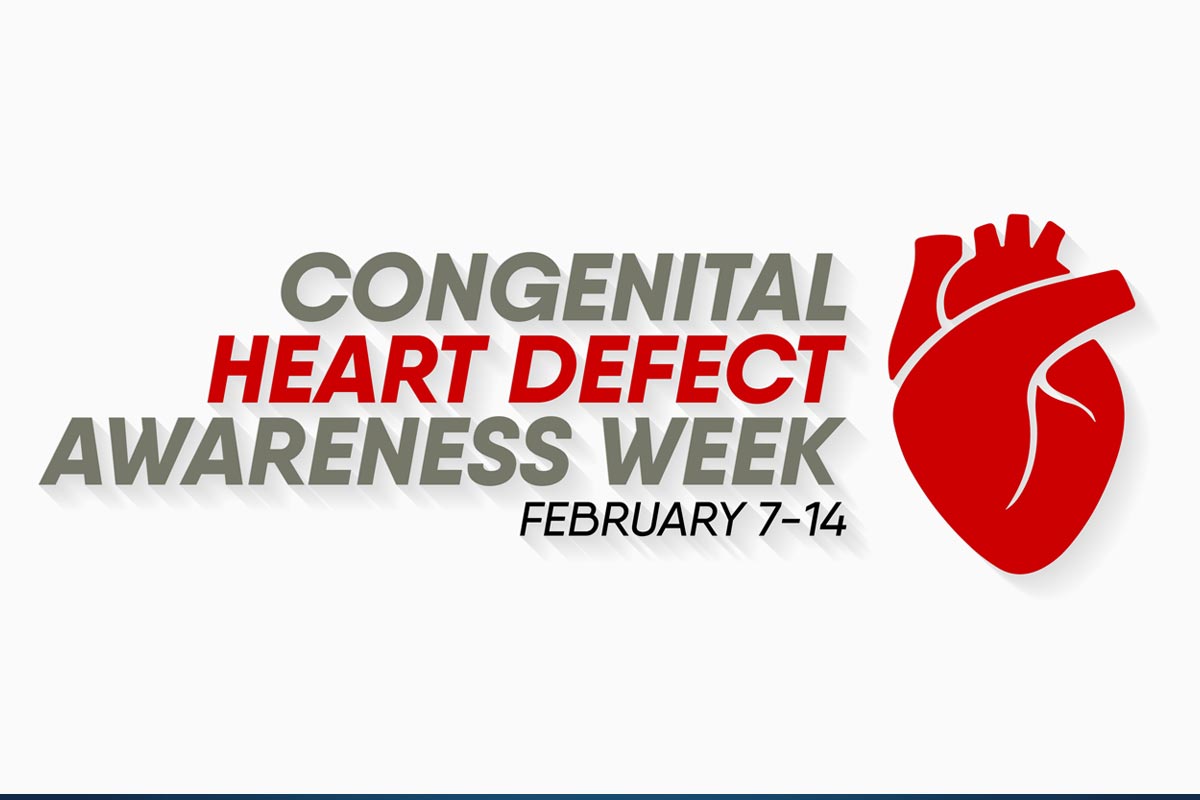 The American Heart Association asks businesses and residents to light up their dwellings each February to commemorate Heart Awareness Month. This month-long campaign is held every year to bring awareness to cardiovascular diseases and promote heart-healthy diets and lifestyles.

You might see plenty of orange porch lights every fall when homeowners begin to decorate their houses for the Halloween holiday. 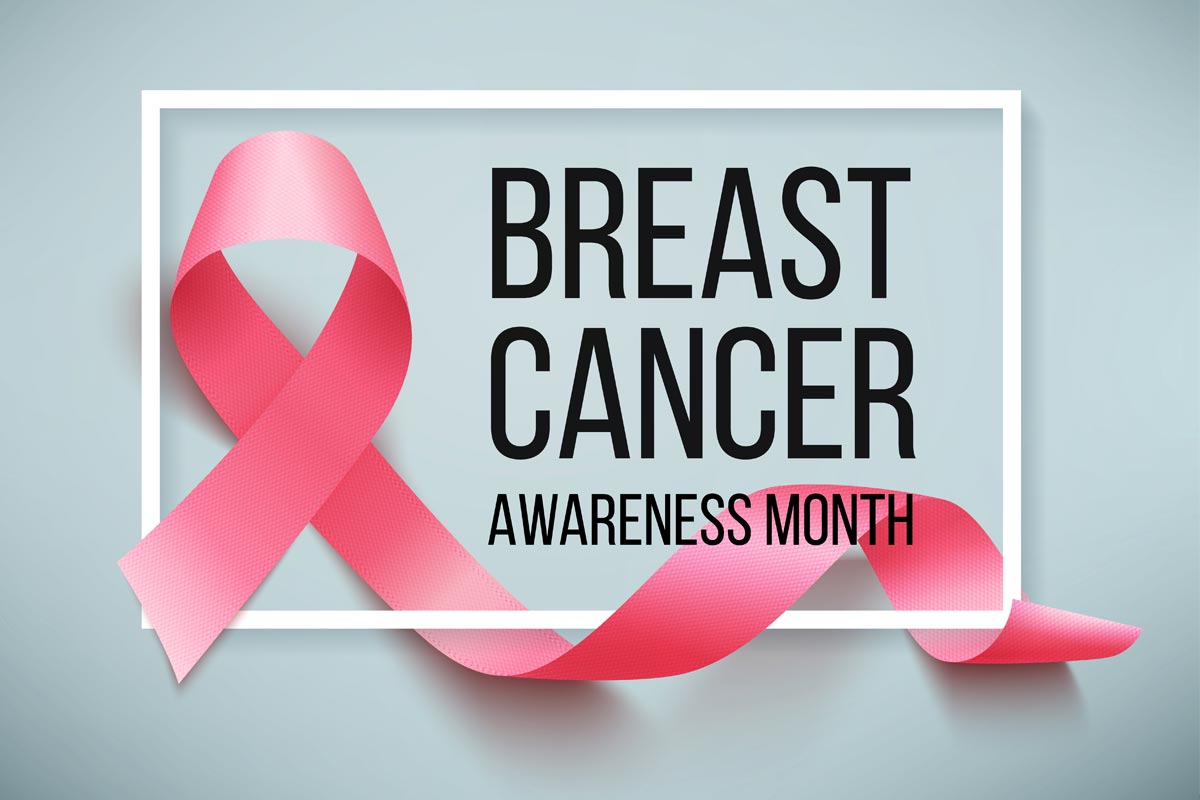 A pink porch light is meant to raise awareness for breast cancer. Additionally, a pink light is used to memorialize those who lost their fight with this disease and celebrate those who survived.

There is no set date for when you should have a pink light illuminate your porch. Some breast cancer survivors or those who have lost loved ones will keep their porches glowing pink all year long.

A pink porch light also serves as a reminder for women to get their annual checkups, as early detection is often the key to survival.

What is the Biblical Meaning of the Color Purple? 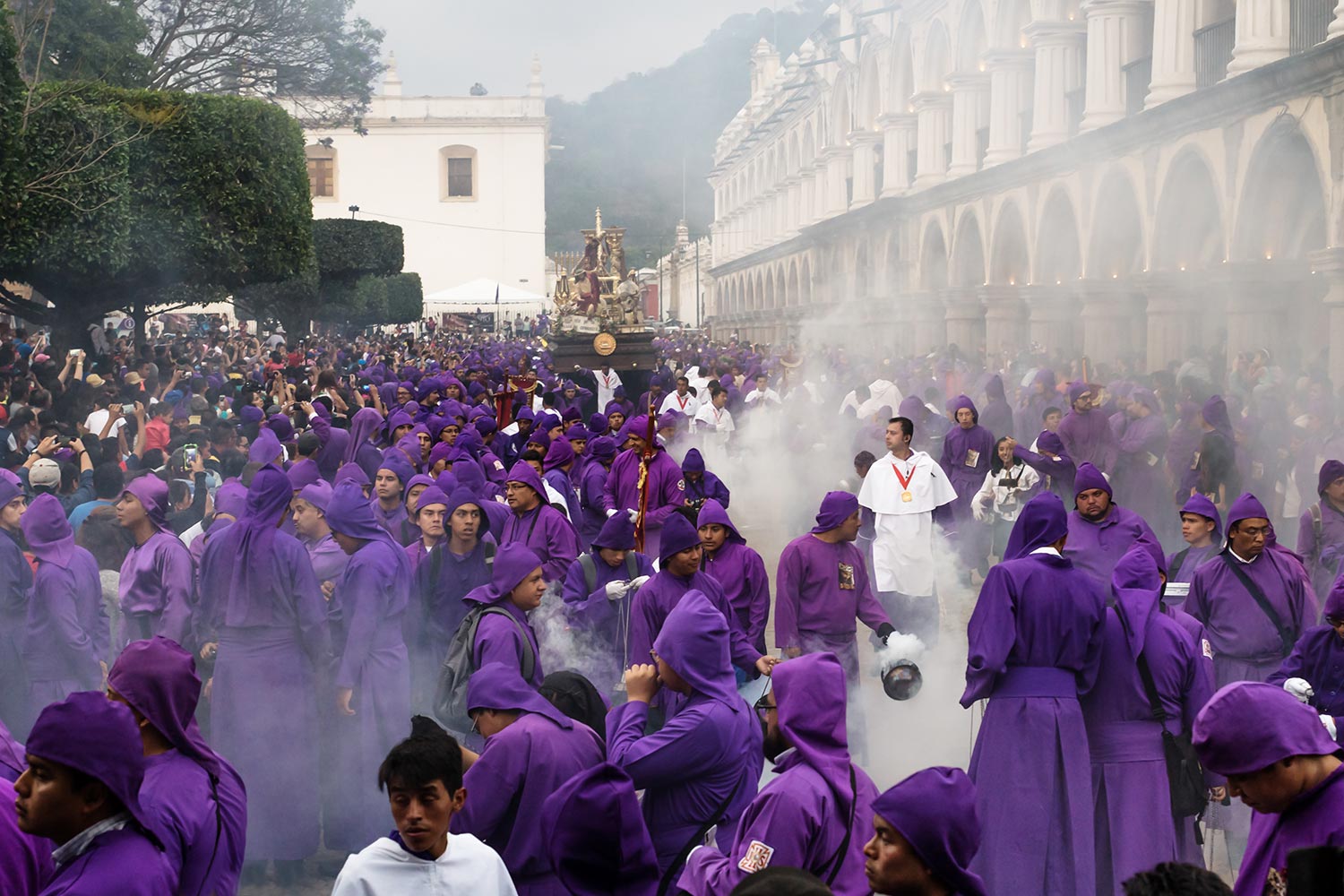 In ancient times, purple was a coveted color. It required using an extensive dying process, using materials that were incredibly challenging to accumulate. Because of this, purple garments were high in price and typically only worn by royalty, the wealthy, or religious leaders.

The King James Version of the Bible mentions the color purple on 48 different occasions. The color is used in this text to convey wealth and prosperity. But the color purple is also used to symbolize majesty and higher officials within a government or a religious faction. 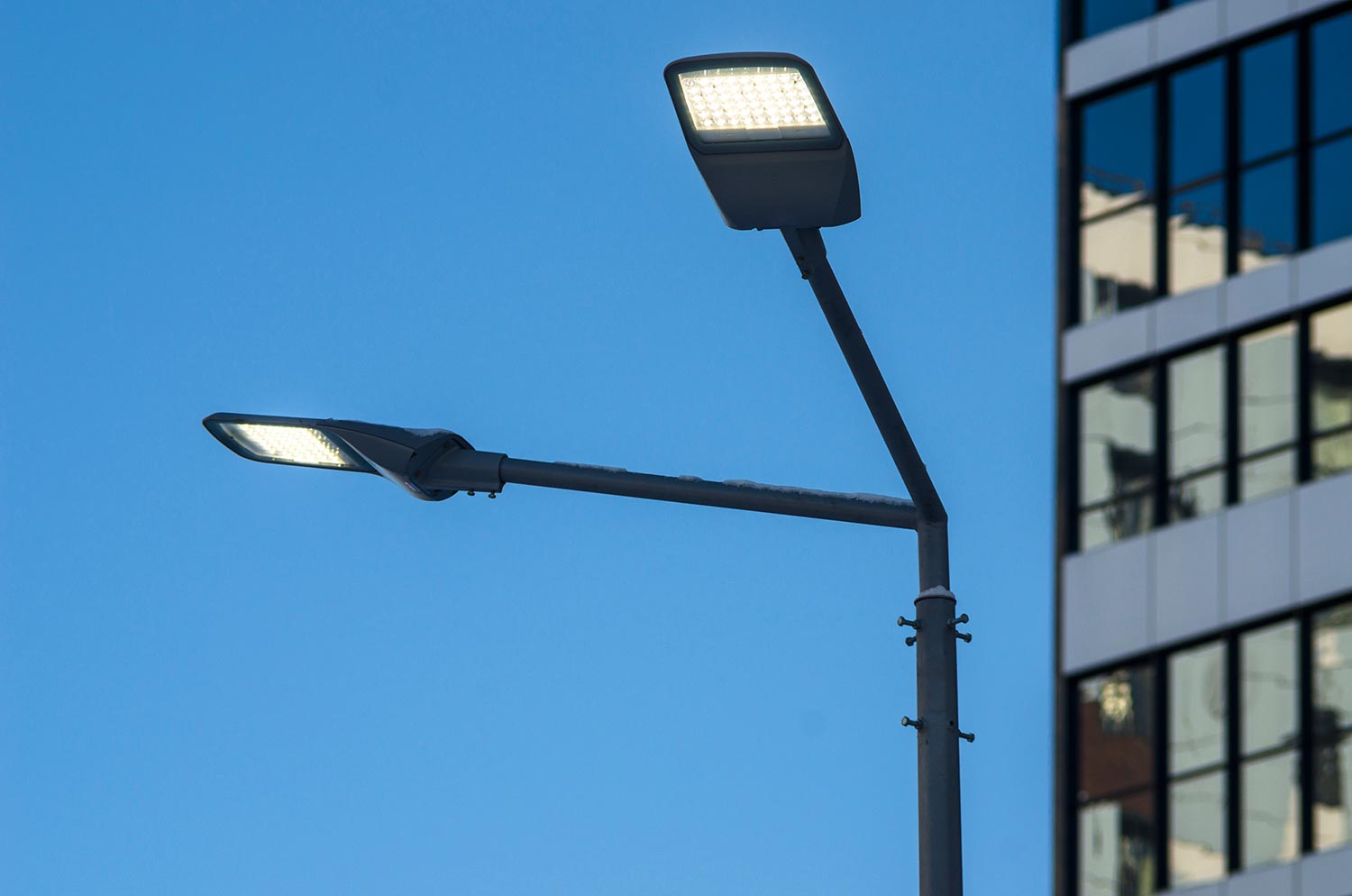 Municipalities began transitioning to LED lights for use in street lights about a decade ago. These lights are more cost-efficient, lasting longer than the conventional ones. They also cost less to operate, as they use a lot less electricity.

If you have ever driven through a city at night, you might have noticed that the lights on bridges or the streets were emitting a curious, purplish hue. Although, the purple light coming from these lights are not an intentional effect meant to bring attention to any particular cause or issue.

When there are defects in the LED lights, they will shine a shade of purple instead of their normal white glow. This has been reported in multiple parts of the United States, ranging from North Carolina to upstate New York to central Kansas.

If you see one, you're encouraged to report it so that crews can replace them with working ones. The lights, though defective, are harmless.

Purple is one of many colors used to bring awareness to certain issues. Advocates of domestic violence awareness have been using purple-colored porch lights since 2007 to create increased attention for this issue.

Purple lights are also used to memorialize victims of abuse. Elsewhere, the color purple has been used to symbolize femininity, wealth, and royalty.

If you found this post on purple porch lights to be helpful, we believe you'll enjoy reading the following posts on home decor:

13 Spooky And Spectacular Halloween Decorations For Your Front Porch